Posted on December 17, 2014 by camryonbronze

I decided to part ways with my Lexus GS project. I sold it and to my surprise, I ended up purchasing my old S13 back- super excited! I have had it back in my garage for about a month and a half now and I have really been enjoying working on it when I have free time. I purchased the car back nearly six years to the day after I bought it initially.

I parted it out and sold the car as a bare shell back in 2012- no seats, brakes, differential, engine, transmission, front bumper, etc. A friend of mine that I sold it to was building an LS1 for it but decided to abandon the project and I am really thankful that he gave me first dibs on buying it back He installed coilovers, brakes, and suspension arms that I was not going to use, so I sold them for him as a part of the deal we worked out.

Here she is sitting back in my garage last night. It’s a trip to walk out of the house and see this back where it used to always sit! So many aspects of my life have changed since I owned the car so it’s just wild to have it back again. 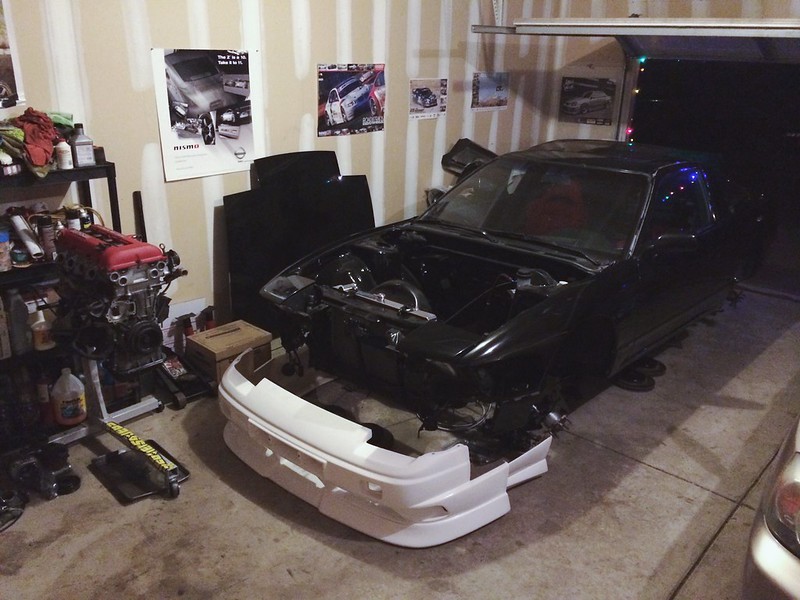 I purchased a rusted out S13 coupe from another friend of mine that was equipped with a stock Red top SR20DET. I am adding an OEM gasket kit, water pump, new clutch, clutch fan, C’s shifter, NISMO engine/transmission mounts, and a Wiring Specialties pro engine harness to freshen things up a bit before I drop it all into the bay. I got an amazing deal on the coupe and sold a few of the items that were on it (as well as the shell) to leave me with a very reasonably priced drivetrain setup. 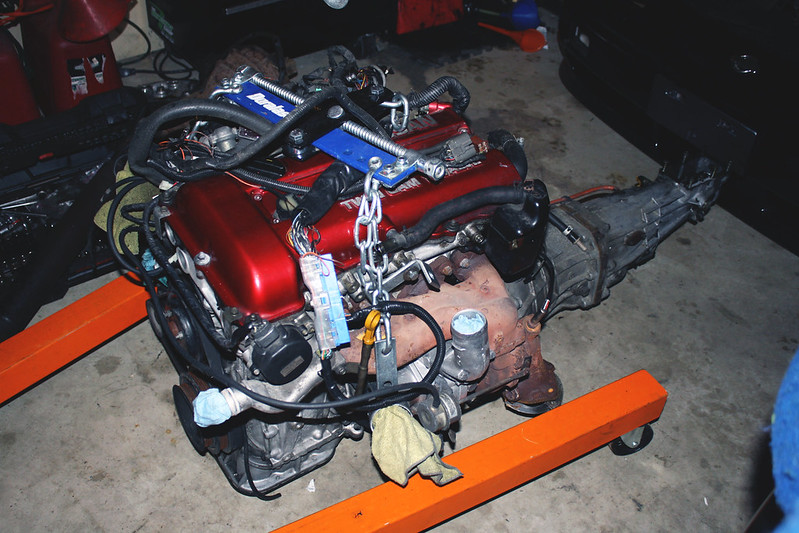 I was even able to get my old valve cover back (you can sort of see it in the first garage photo) which I thought was really cool.

I got some kouki tail lights and Hot Road aero for the car. I’m really excited as I have always wanted to run Hot Road like Itai’s 180SX. A friend from Zilvia imported it from RHD Japan back in 2010 and had been holding onto it for a rainy day. I’m really grateful that he decided to pass it on to me. I’m really excited to see it all come together. 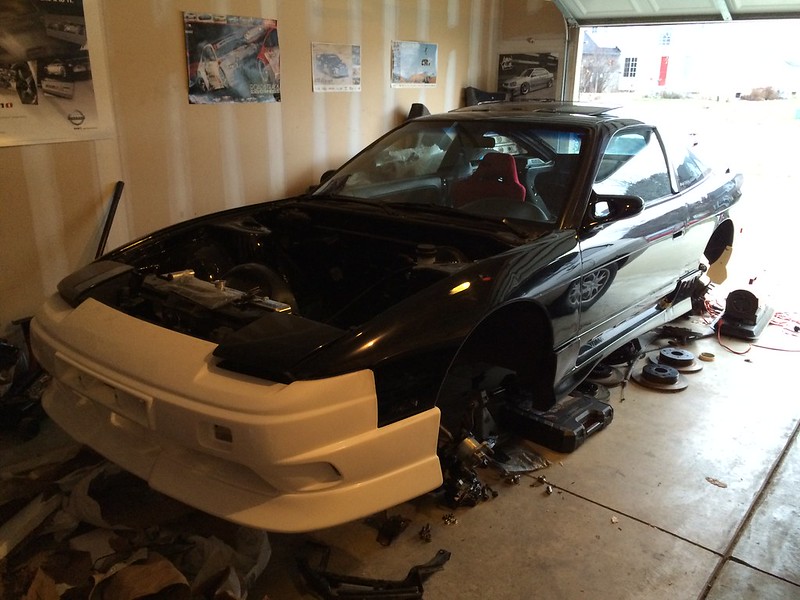 Don’t mind those blue wheels.- I borrowed those for transport, haha. 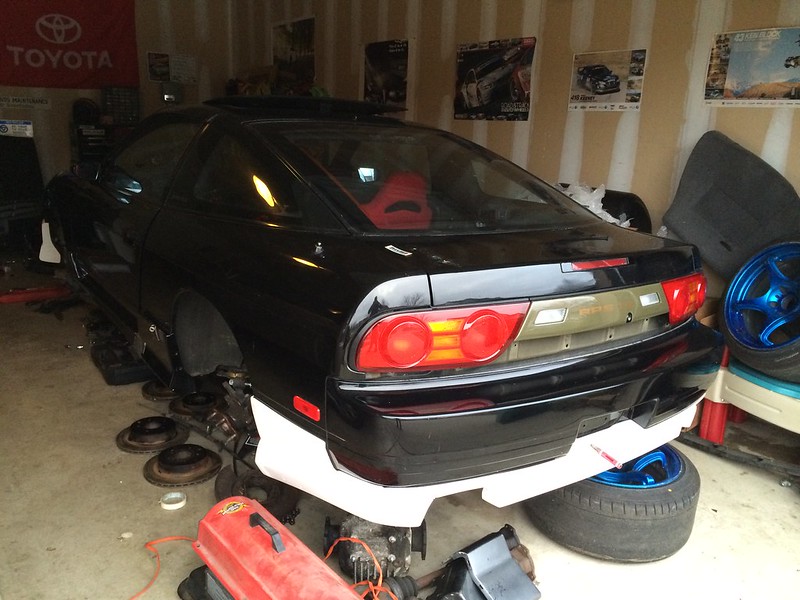 Here’s the inside right now. I kept my Bride Zeta II and Ergo from the GS project. I’ve been working to source a few of the small interior pieces I was missing, as well as a couple other cool things I stumbled upon. I’m really pumped to see this come together in the next couple of months. I’m debating if I want to gut the hatch area or not… we’ll see what happens! 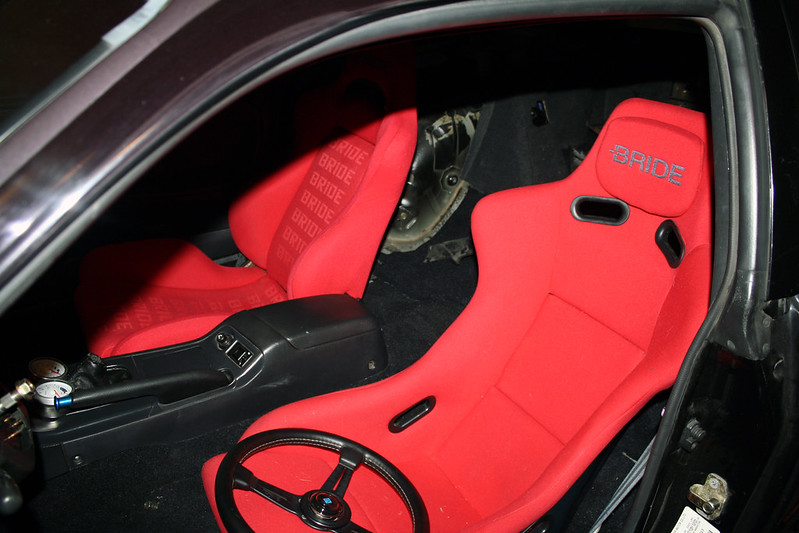 With the help of a friend I was able to find a Kakimoto exhaust just like the one Itai ran on his car. Pretty excited to have a canister style exhaust setup again! I’m hoping it sounds similar to the DMAX unit I had way back when. It’s up in Canada now but it should make its way here very soon. 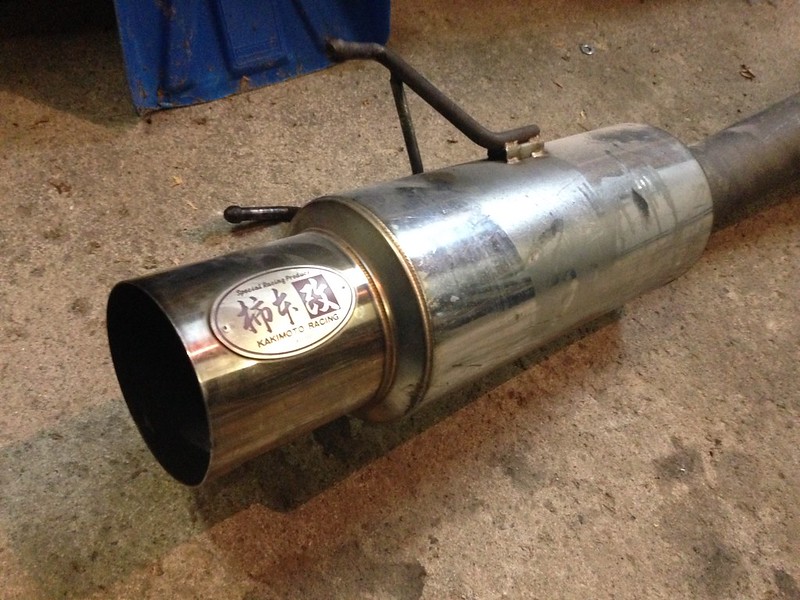 A lot of things will be similar to the car’s previous life, but I am changing up a few things as well. The engine will stay stock for the time being, so it will be down a lot of goodies in that department. It should still be a lot of fun though. I’m the most excited about the interior and exterior right now. I’m really trying to scale back on the excess and focus on the details that I really enjoy- not take anything for granted and be content with what I am given. I’d like to imagine that I will not let this car slip away again.

I’m hoping to have the drivetrain in the car by early January. I would like to have it ready to drive by the time the snow melts in April or May, but we’ll see how it goes- family and day to day things are always the priority. I don’t think it should be too much of a stretch though. I’m really excited to drive it to Final Bout in 2015, so hopefully that works out OK!

I’ll start posting pictures on here as I make some more progress! I’m going to try to at least post a photo every day if I can. Thanks for reading!

8 Responses to I’m Back