As I have primarily been posting overhaul progress on an SR20DET engine I scored from a partout car last winter for the past few months while my S13 is collecting dust, I wouldn’t fault you at all if you forgot there is actually a car that will eventually be mated up with that drivetrain.

In case you missed it, I picked up a bone stock ’92 S13 coupe back in October of 2018 (or more specifically, my friend Tim picked it up for me.) After Tim graciously towed the car from Indiana to his parents’ barn for winter storage, we got to work by removing the USDM pop-up front end and brown interior from the car. After inspecting it thoroughly, we stripped the engine bay to have some rust repaired and the bay repainted prior to transporting it to my house. 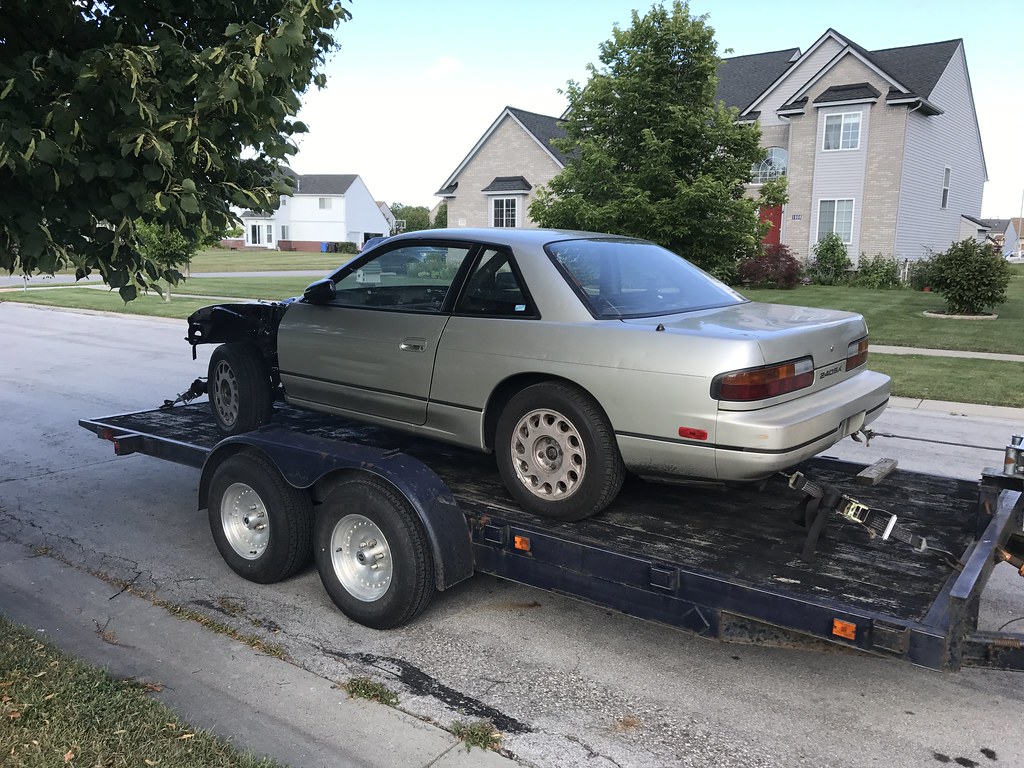 Fast forward about nine months or so to this past Friday. The car is finally home in my garage next to my other S13- a pretty awesome feeling. While it may seem like this took way too long, this is exactly the realistic timeline I set for myself to get the engine bay painted and have the car transported back to my house. My goal for a while now has been to have the car home and the engine sitting inside the bay before the end of the fall, so at this point things are right on schedule. 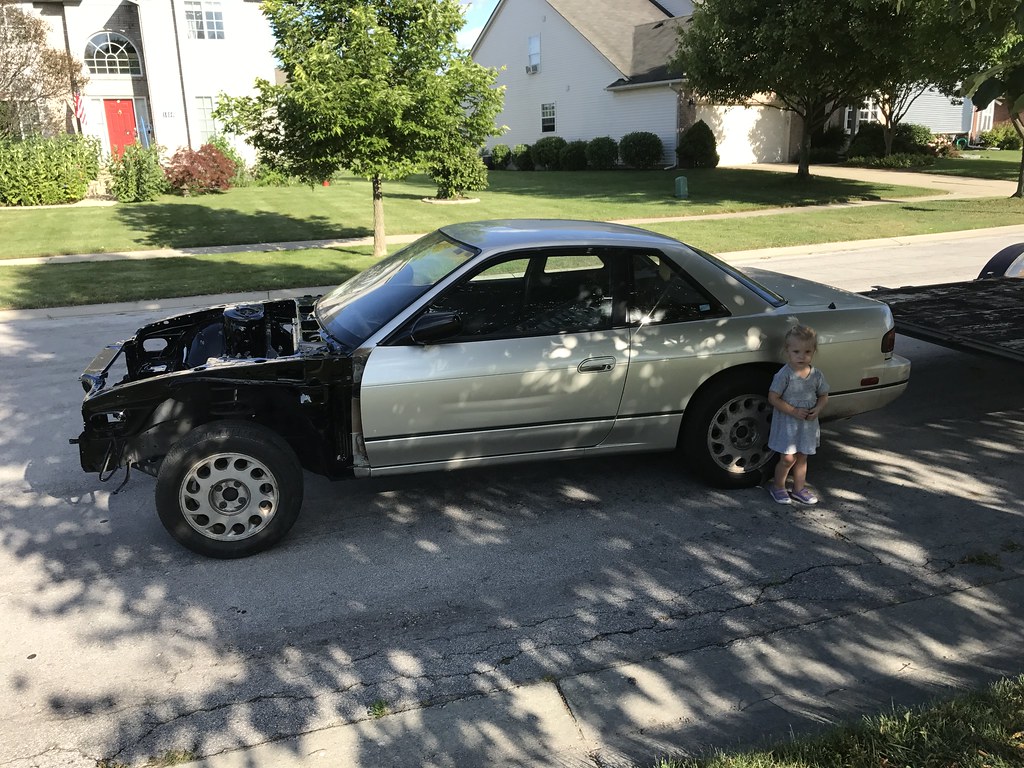 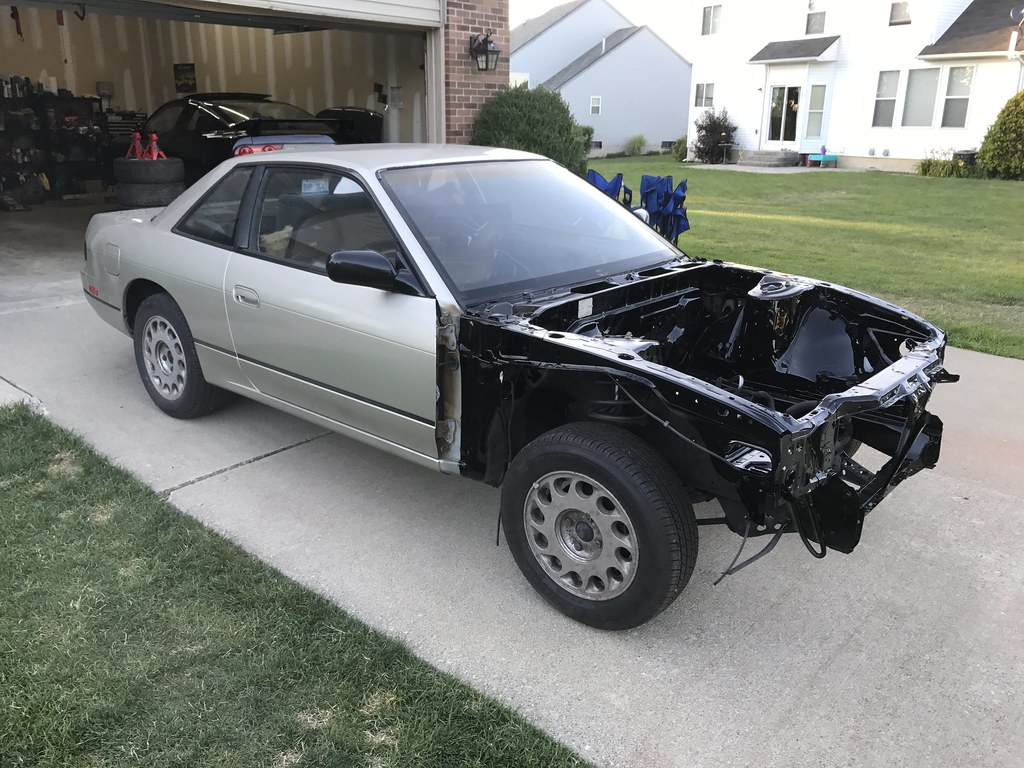 Believe it or not, this was actually the first time I have seen the car in the daylight. It definitely has its share of dings, especially on the driver’s door and quarter panel- but nothing that can’t be taken care of prior to paint. I have a replacement trunk in the basement with a factory spoiler on it, but I haven’t decided which look I prefer just yet. 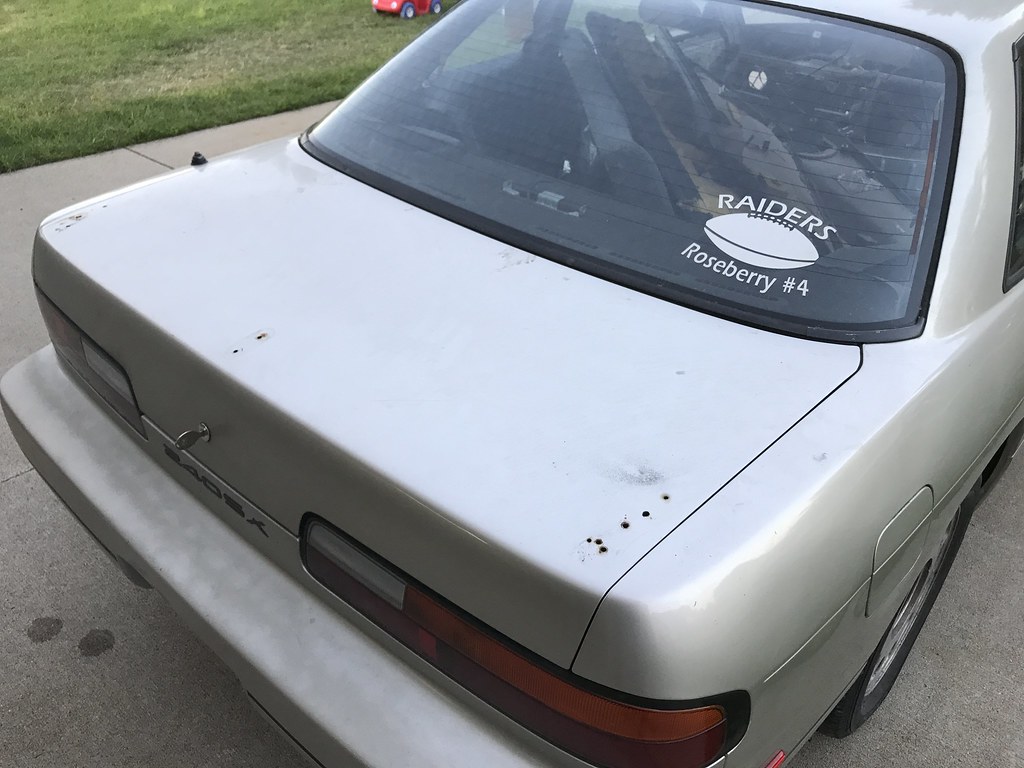 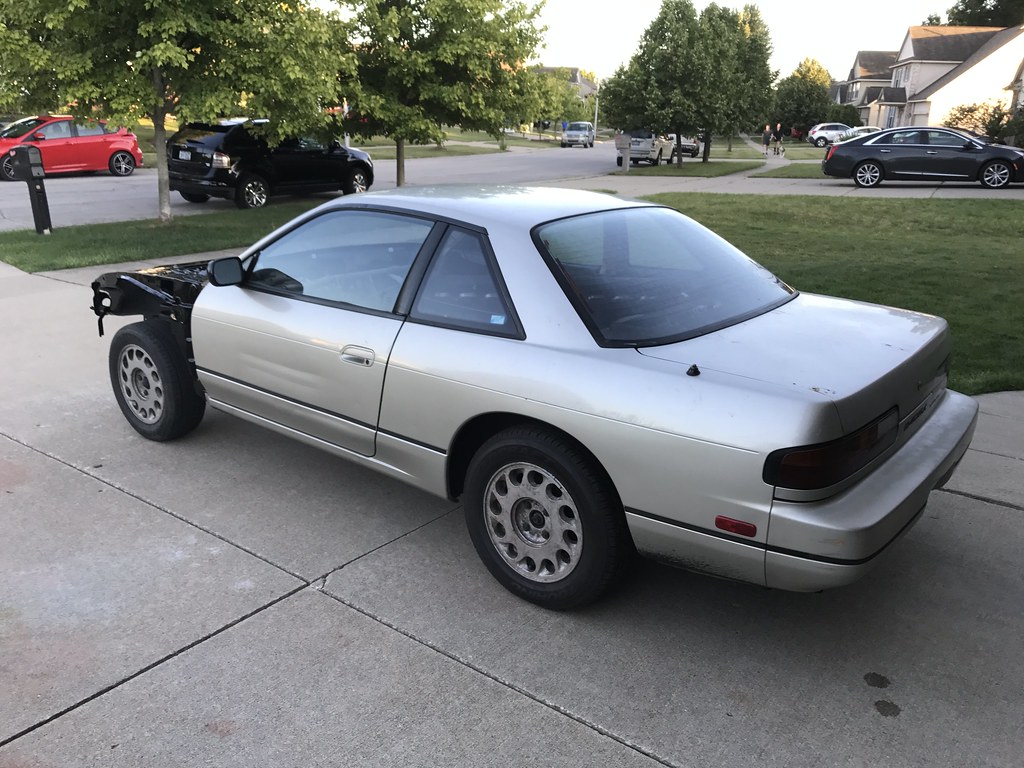 The trunk has some rust forming around the holes where there must have been a spoiler at one time. Both of the tail lights have some cracks, but I have sourced a cleaner pair that will eventually make their way onto the car. This must have been a high school student’s ride at some point based on the sticker on the back window. 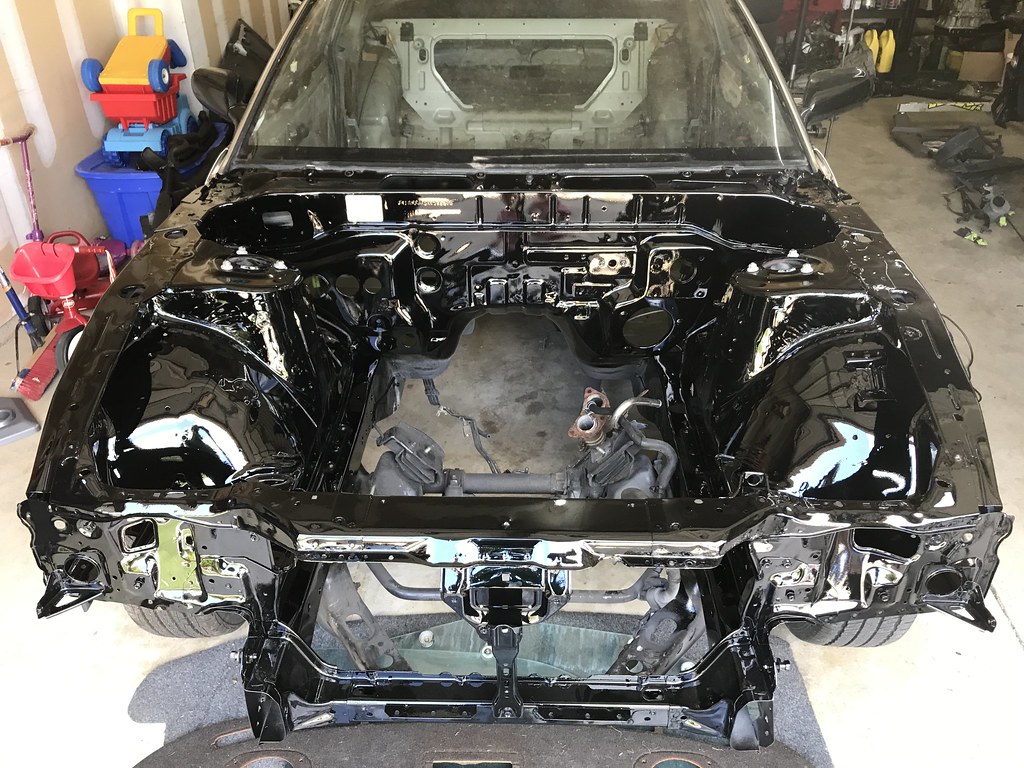 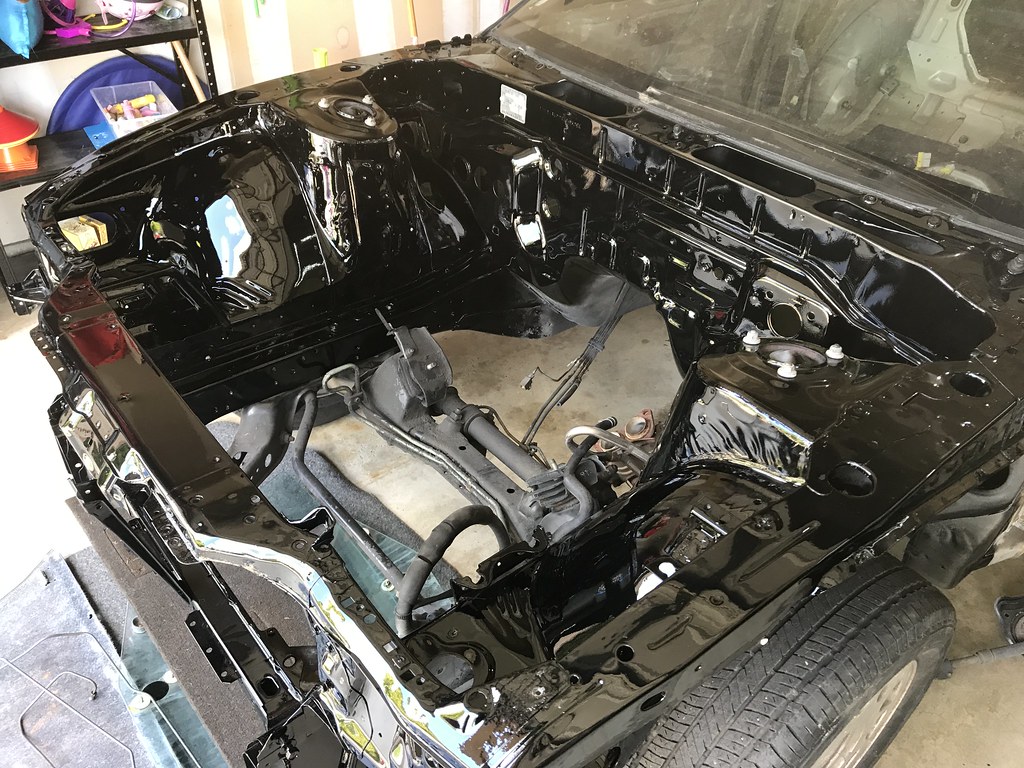 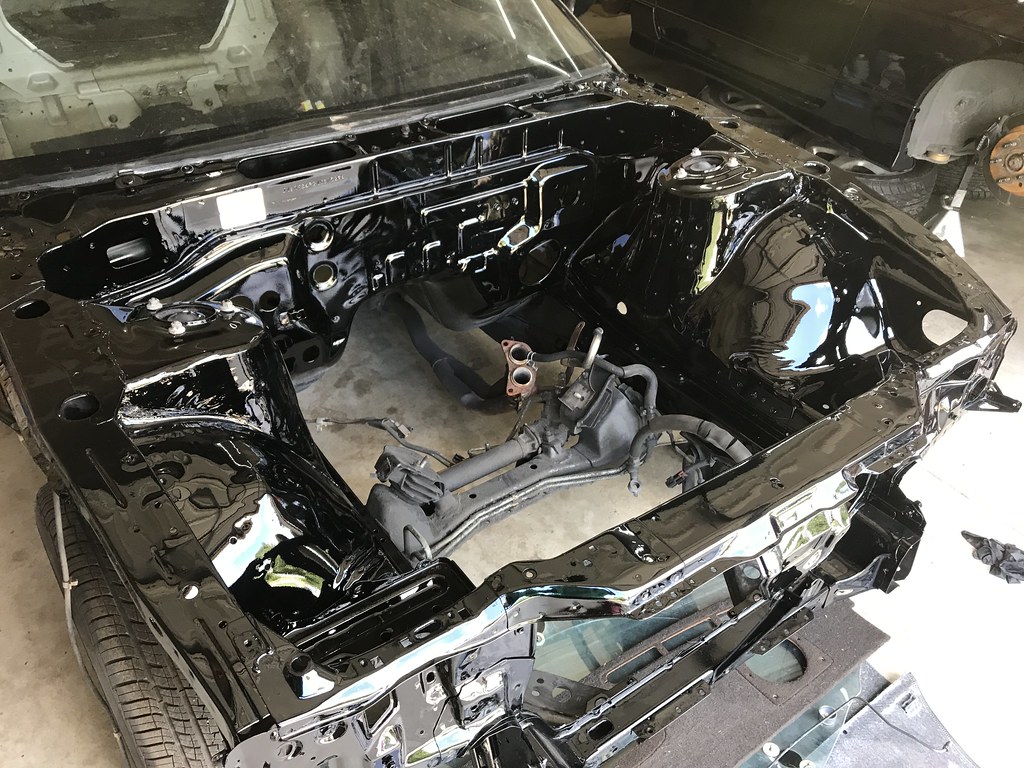 This time around I elected not to shave anything in the engine bay to maintain a factory appearance. I attempted to piece together a shaved engine bay on my hatch many years back and have since grown to regret it, so I left everything as-is this time around. The rust above the frame rail has been repaired and I now have a blank canvas to work from. The battery, brake and clutch lines, and fuse boxes will all remain in their respective factory locations. 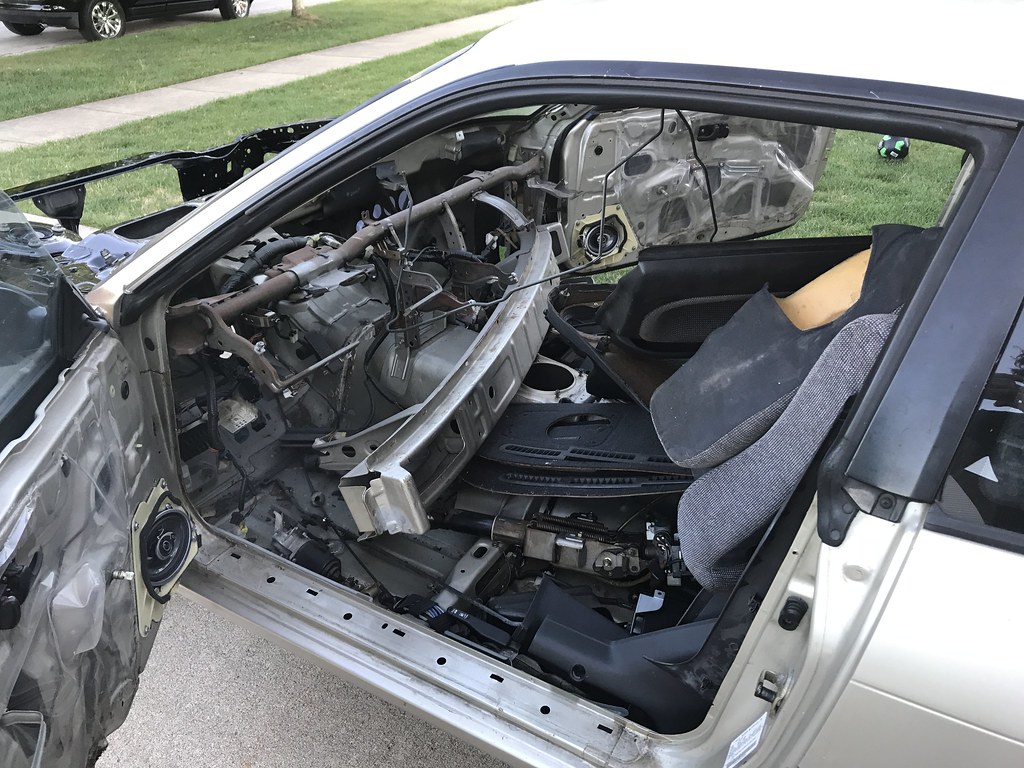 Various interior and chassis items were all piled inside of the car for transport, so I slowly began diving in and getting organized over the weekend when I had the time- but I’ll save that for a future post.

It feels good to finally have the car at home in my own garage. I’m anxious to dive in and begin getting some work done on this thing. With any luck I’ll have some progress to share soon. Thanks as always for stopping by!