Alright, after taking a brief break last week to finish up the Cozy Coupe, Kinsey’s project is officially on the road. With her out cruising in this beautiful summer weather most evenings, I’ve got some free time to focus on getting my own car together.

So let’s see… I believe the first thing I did two weeks ago was pick up my painted Ganador Mirrors from Superior Collision. I always use the same body shop for all of my projects and they do a really nice job for me considering the price. I’m pretty happy with how they turned out: 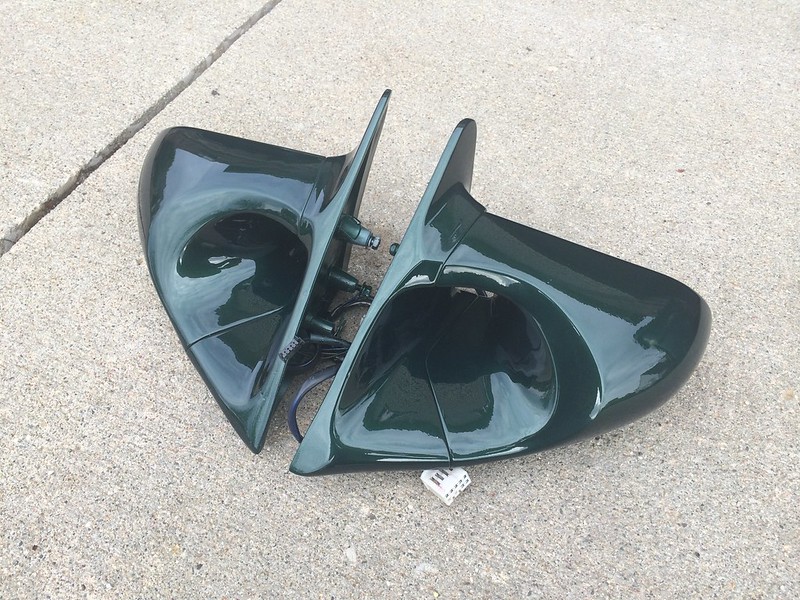 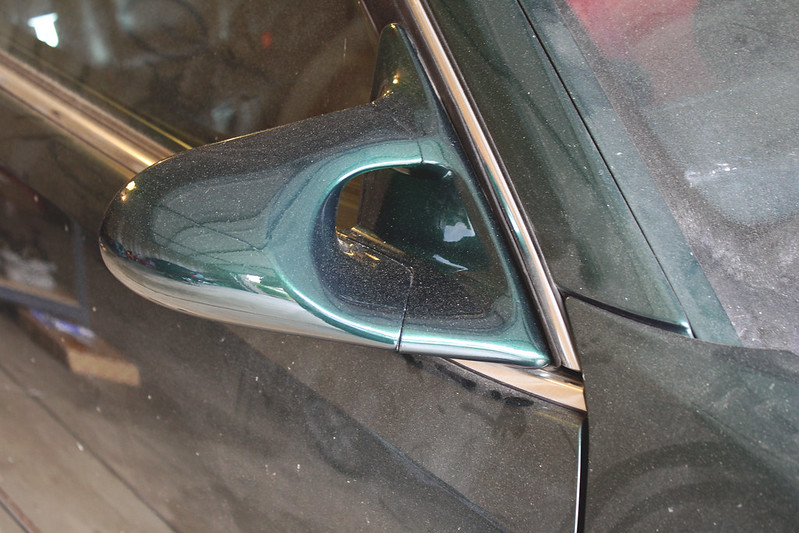 Ganadors just manage to make any car look so much cooler, haha: 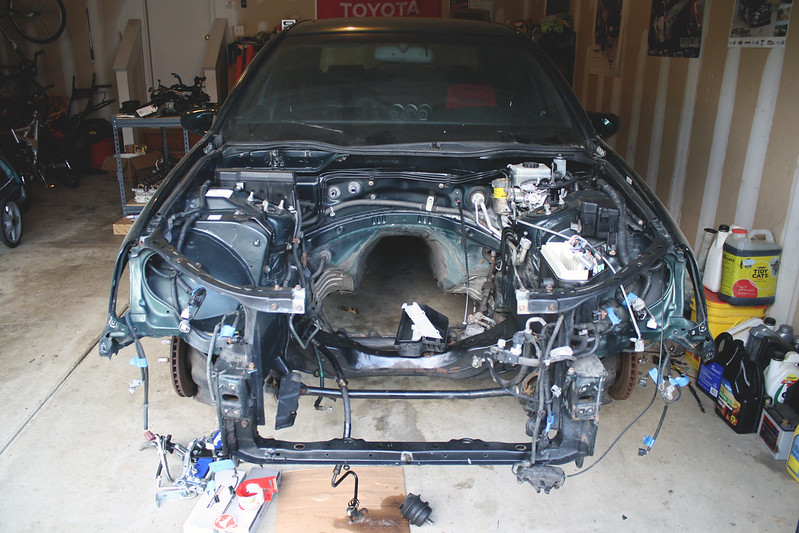 I received my shifter housing and linkage back from Ben at Freed Engineering. The turn around time was less than a week on this work- very impressive! Ben was great to work with and the welds look top notch. I had them extend the housing and linkage 2.5″ to center it in what will now be the manual transmission center console. Still need to install the Marlin Crawler bushings when the assembly goes back together. 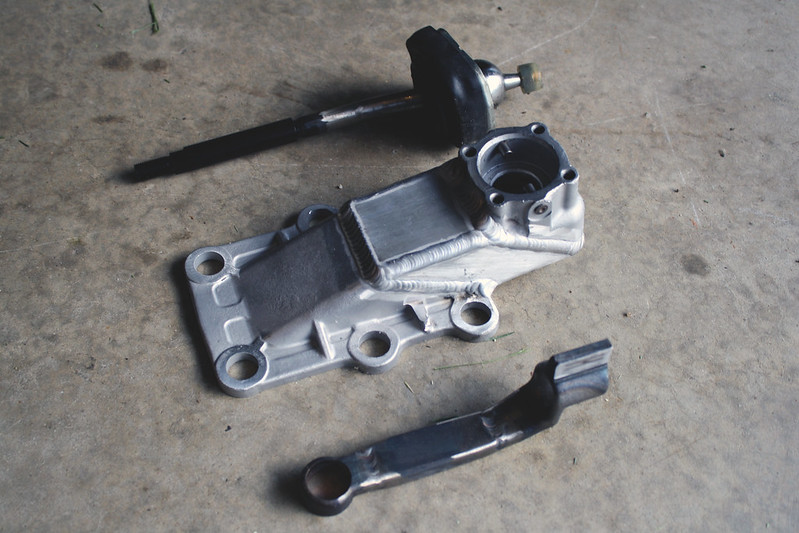 It seemed like the shifter was going to be too short and sunken down into the Lexus’ beefy center console, so I picked up a cheap shifter extension on eBay. Not normally the route I go with my parts, but it seemed like a fairly tough thing to mess up. I’ll have to try it when the transmission is back in the car to see if I like it.

Next, I tore into the engine to begin the routine maintenance work. When I removed the front cover, I found a decent amount of oil had been leaking from the cam seals. After taking it apart further, I decided it was best to completely tear the engine down to replace a number of the aging components and reseal things as nicely as possible. 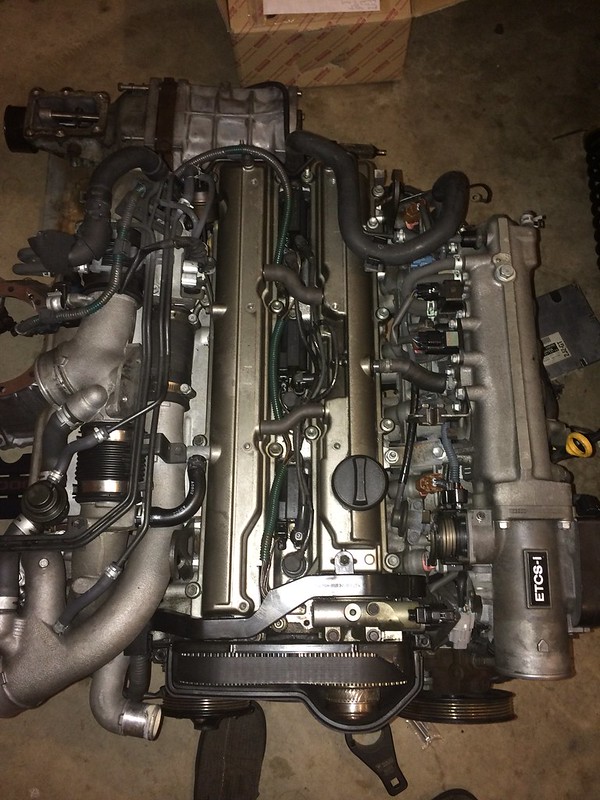 The crank pulley was giving me a hard time when I tried to remove it on my own, so I ended up picking up a pair of pipes from the hardware store. I used one as a cheater pipe and the other as a brace against the floor on the crank pulley removal tool and that allowed me to break it loose. Forever Alone, haha. 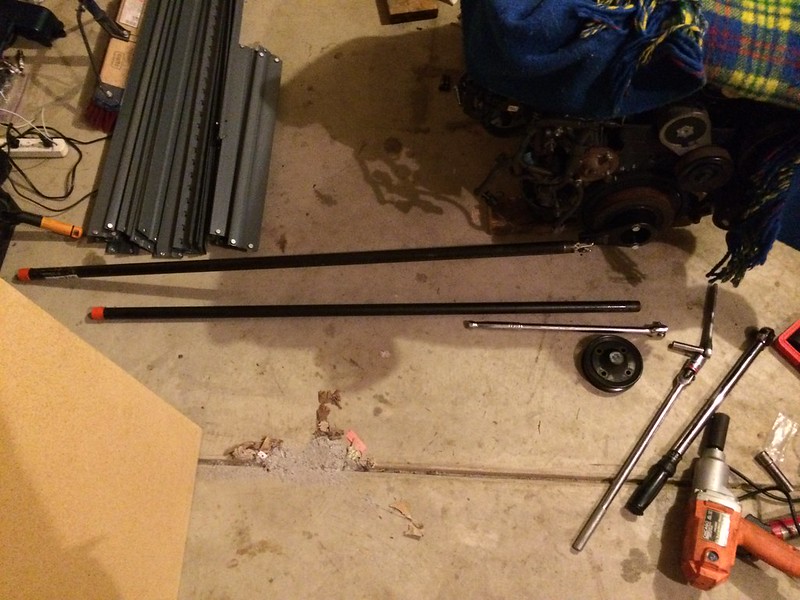 From that point, I went ahead and removed the camshafts and pulleys. I was not able to break the VVTi pulley loose and nearly stripped the nut holding it on, but fortunately I was able to remove the cam with the gear installed. The pulley is showing signs that the internal o-ring may be bad anyway and I wouldn’t mind a set of Tomei Poncams, so I might just replace the whole assembly- but we’ll see about that down the road. 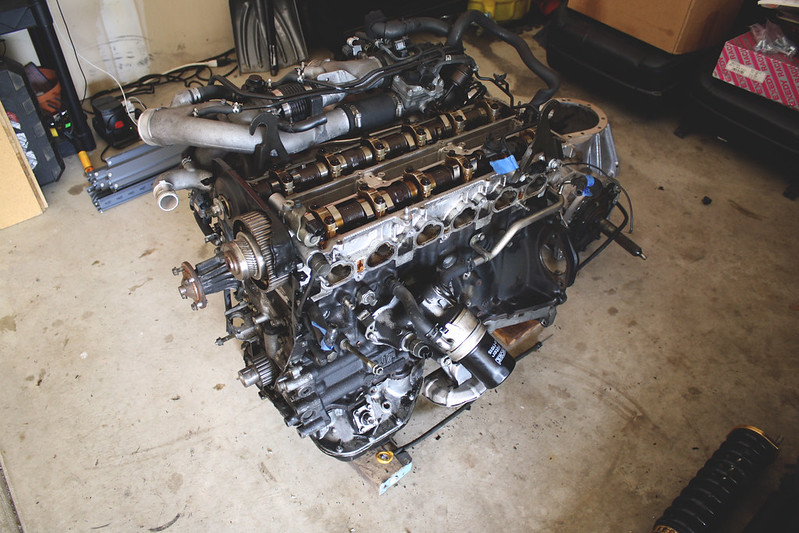 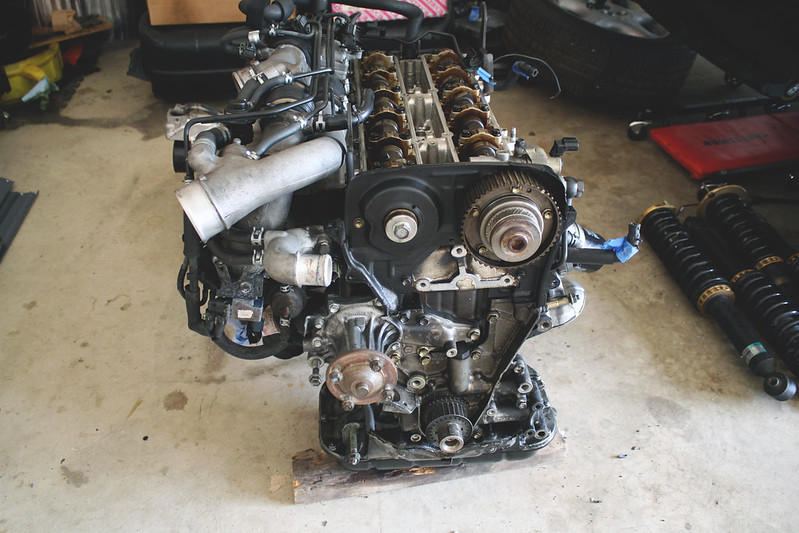 Next I removed the wiring harness, intake manifold, fuel injectors, AC compressor, and power steering pump. But the worst part of tearing down this engine has got to be removing the twin turbo assemblies. I seriously can’t imagine doing this while the engine is in the car! I was hoping to find that the turbos were in decent condition, but sadly they have seen better days. I found a pretty hefty amount of shaft play in each of them. With the amount of time it took me to remove them, there is just no way I am putting those back on the car. 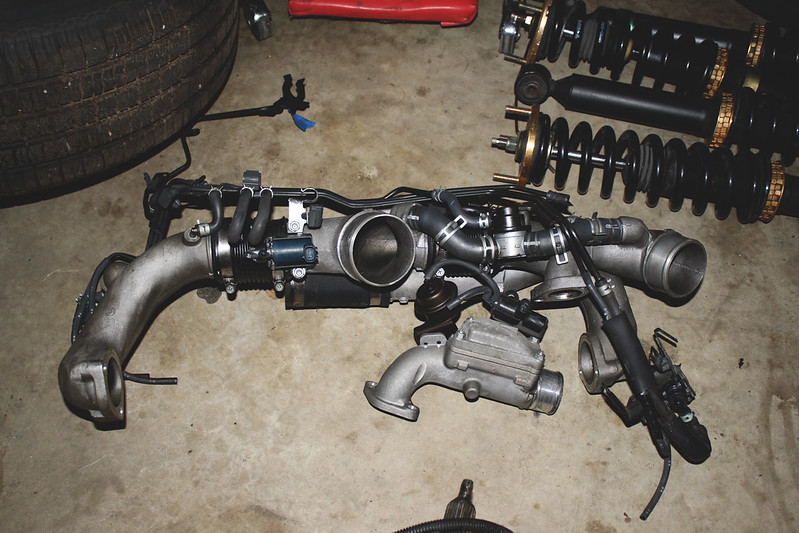 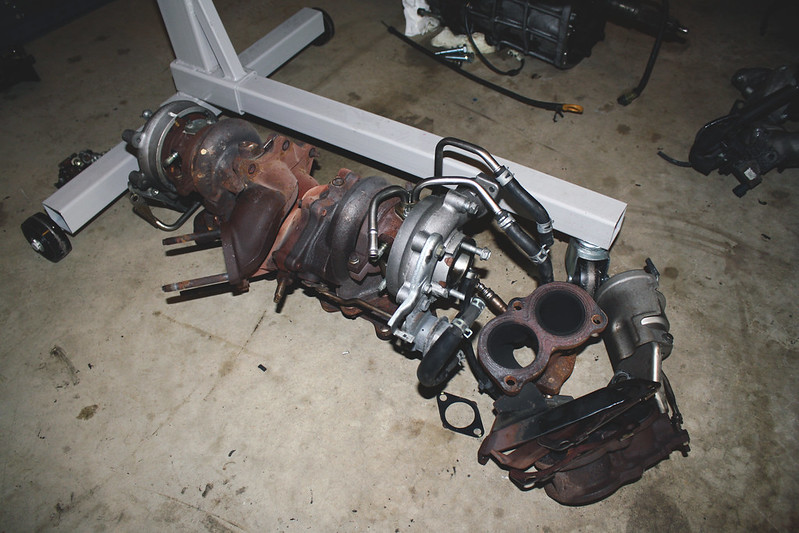 After tossing the turbo assemblies across the garage, I was finally able to put the engine back on the stand. From there, I removed the head studs and lifted the head off of the engine. Here are a couple shots of how the engine is sitting at this point: 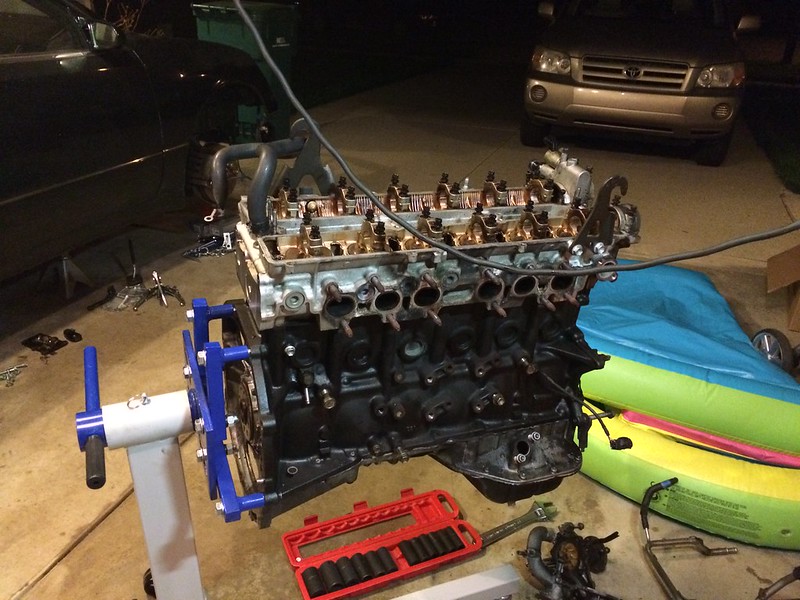 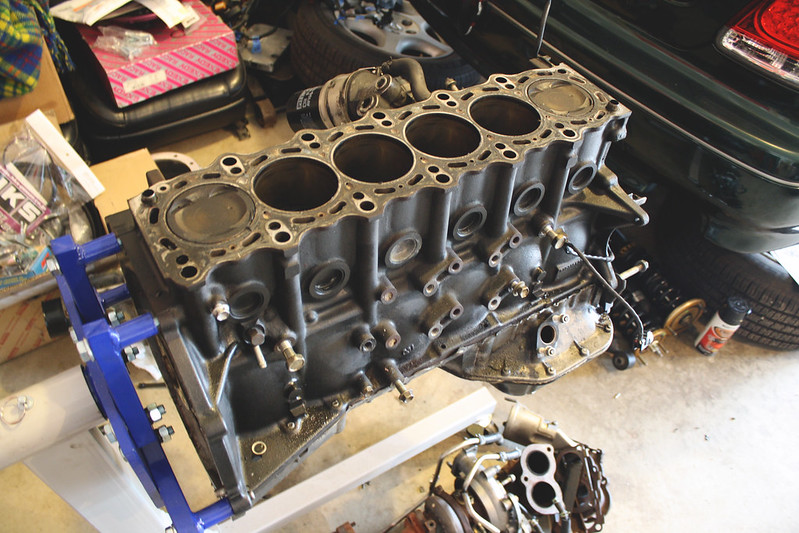 Next I need to remove the lower and upper oil pans, replace the oil pump and strainer when it arrives, and inspect the main bearings. Hopefully the bottom end is in good shape because I really don’t want to get into messing with that portion of the engine. 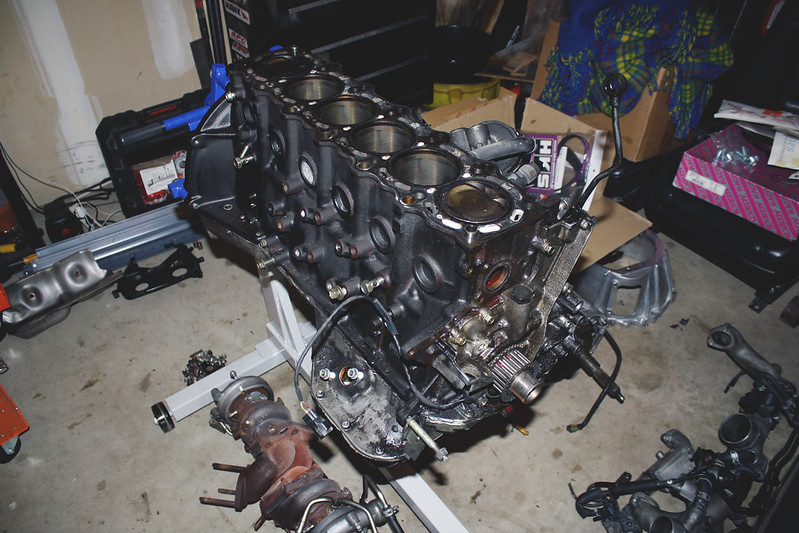 Will all of this add a decent chunk of time to the build? Yes. But will the car be more reliable and better off for it in the end? Man, I sure hope so. I am getting into a little more engine work than I had originally anticipated, but what else is new? I’m glad I am taking the time to learn the ins and outs of the drivetrain so that when problems do arise down the road I will have a better understanding of what the culprit may be. It’s annoying to have to take longer now, but hopefully it will pay off in the long run much like it did with my SR20. 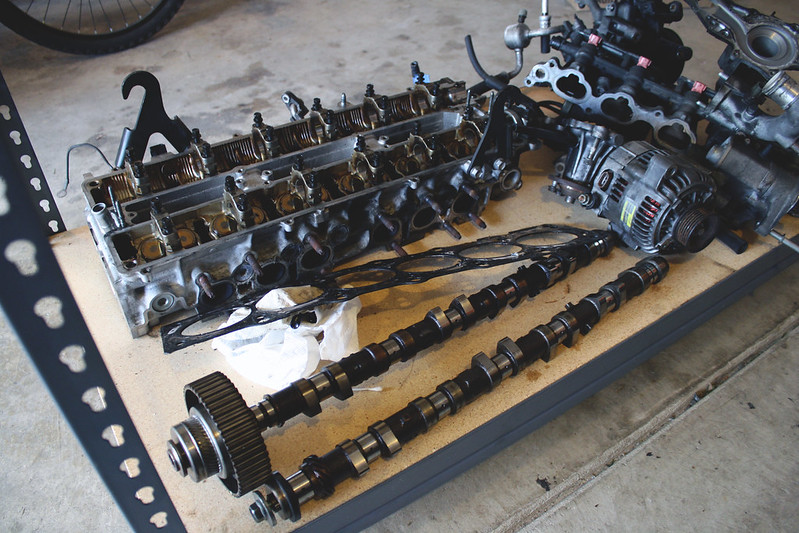 I picked up a couple of shelving units from my in-laws to get our basement organized, but I ended up using one of them in the garage to keep track of all of the engine parts and hardware during the rebuild process. Fortunately my wife doesn’t mind if I park her car outside for a while. At least the snow is gone for a few months! 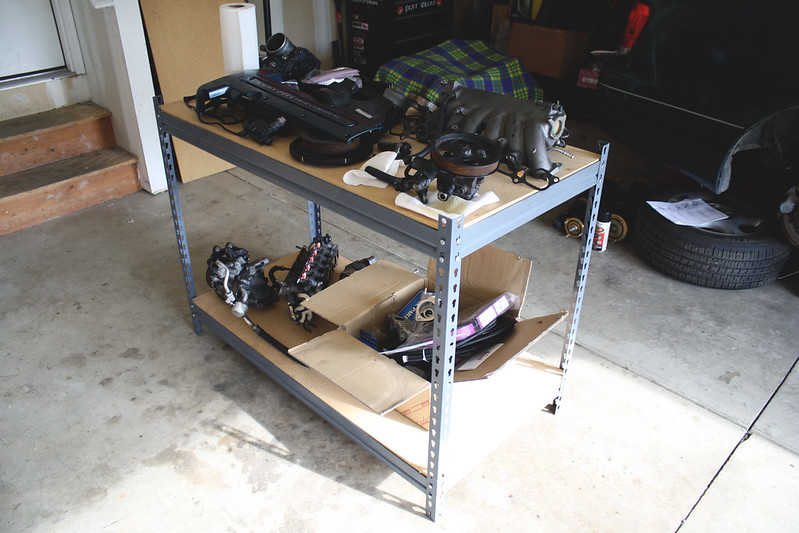 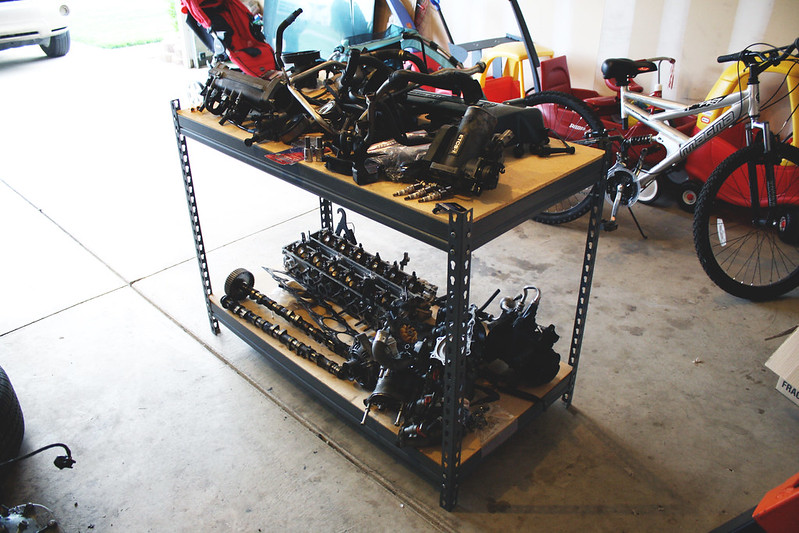 My cousin Nick was gracious enough to take my valve covers in to a connection he has through his work to have them powdercoated, so those should be cleaned up and ready in about a week or so. 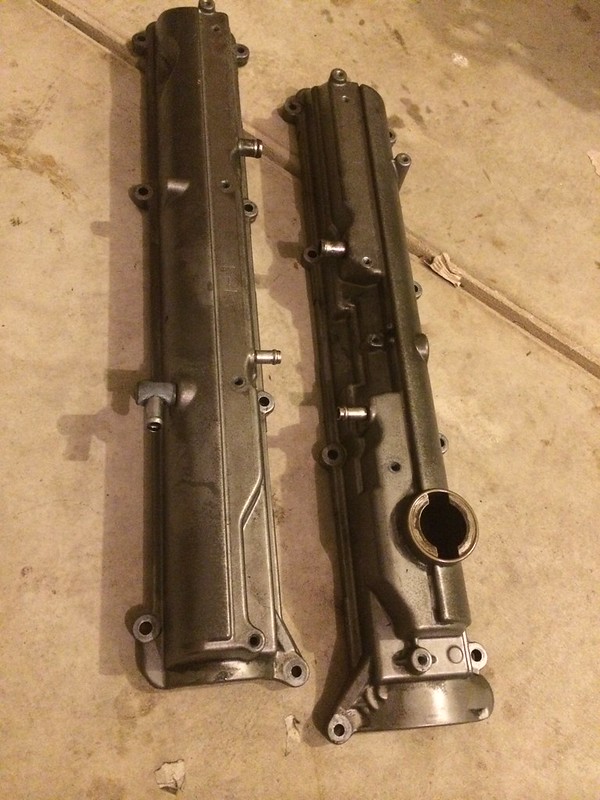 I had a few other necessary parts show up during the last week or so, including my SARD jet pump killer and low temp thermostat. I still don’t have a solid handle on exactly what the jet pump killer does, but I know it has something to do with the split design fuel tank and preventing fuel starvation. Not to mention it sounds “killer” on the mod list. heh… heh… 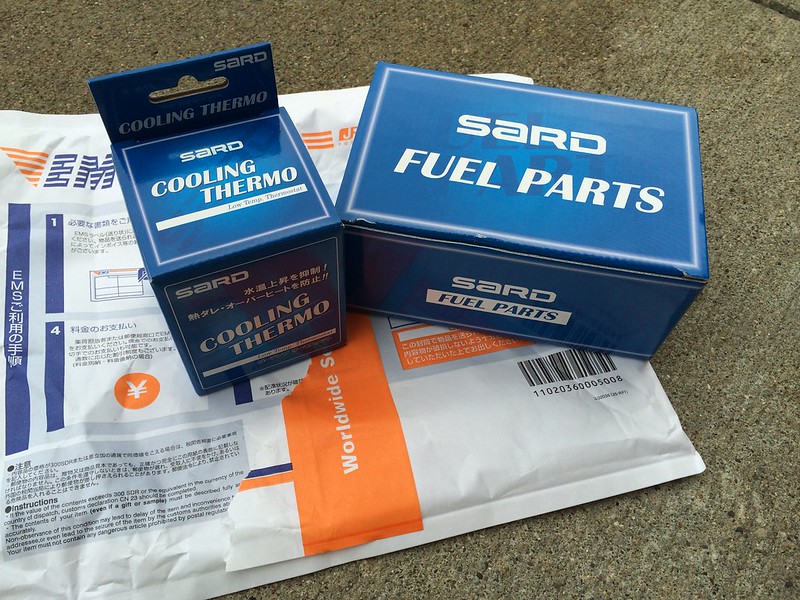 My ARP head studs and GReddy oil adapter plate also arrived from BaoHouse Tuning- a small, local outfit that has been helping me source a few items for the build. It’s great to have things arrive so quickly- kudos to them! 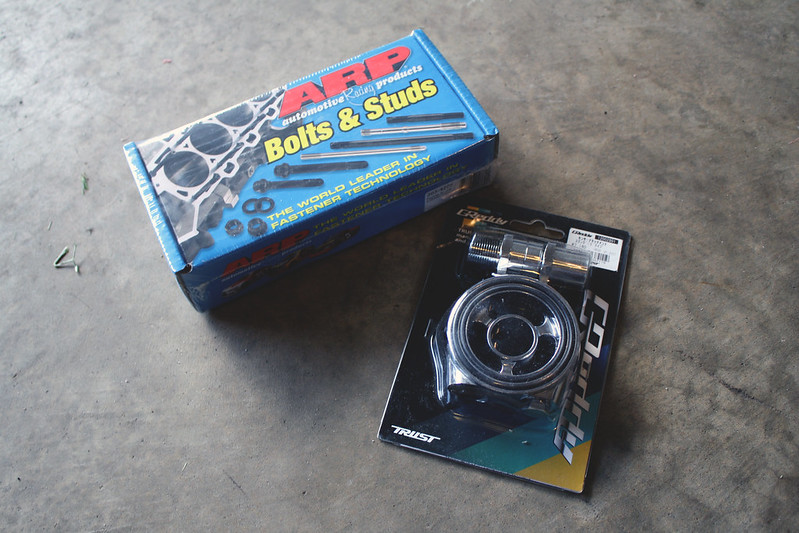 My man Gazi hooked me up with a pair of radio and climate control mounting brackets from a car he was parting out since my car was missing these pieces when I got it, so now I can bolt those items in. He is responsible for sourcing and shipping me the majority of the items I needed for the black interior conversion. I haven’t even touched the car itself in the past couple weeks with all of the engine and transmission work going on. 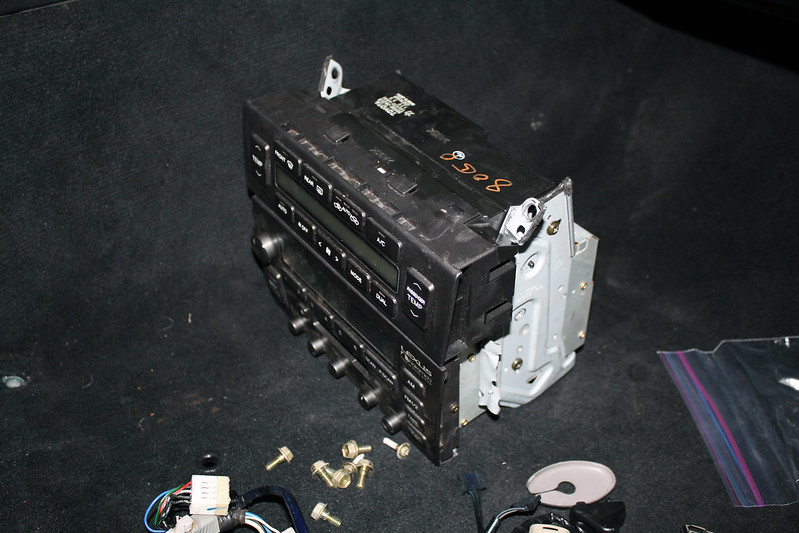 Tonight my OEM oil pump arrived, as well as a couple new resistors that should hopefully get my tail lights working when the time comes: 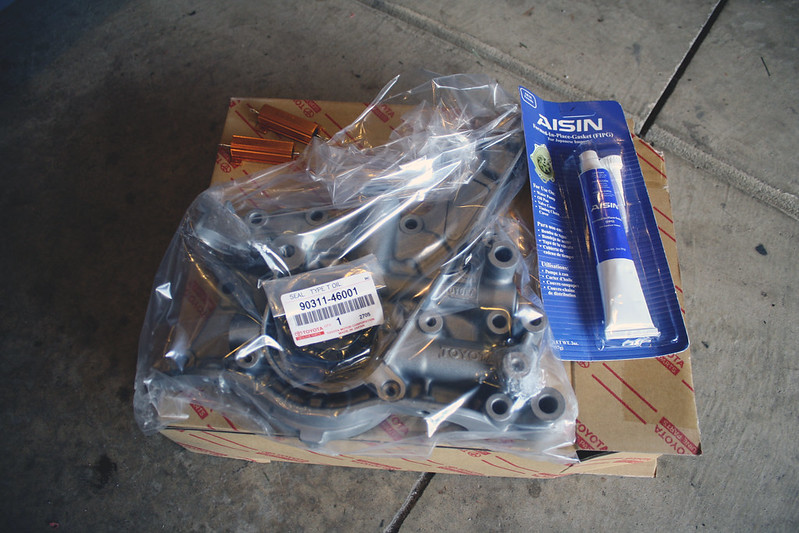 So that just about brings us back up to speed. Stay tuned and thanks for following along!

4 Responses to Back to Business