It’s hard to believe how much time has passed since my last update on the Cozy Coupe my daughter Kinsey and I have been working on. We were making steady progress as of last October when we last checked in, but a combination of factors including the worst winter since modern record keeping began and the birth of my second daughter Hattie kept us from getting the car on the road.

For me, the XceedSpeed.com Spring BBQ is the unofficial start of summer each year. I’ve been apart of this online community for several years now and have made a ton of friends as a result. It’s always fun to get whatever project car I may be building at the time put back together and bring it out to the event. But after selling the Evo a couple months back and picking up my Lexus GS400 long-term project, I didn’t have a car to bring this year.

Admittedly, I had kind of lost interest in the Cozy Coupe over the last few months. I wasn’t even sure that Kinsey would fit in the car anymore with the chop top considering how much she had grown over the last six or seven months. The Xceed Spring BBQ was just the motivation I needed to spend some time in the garage and get the car put together. 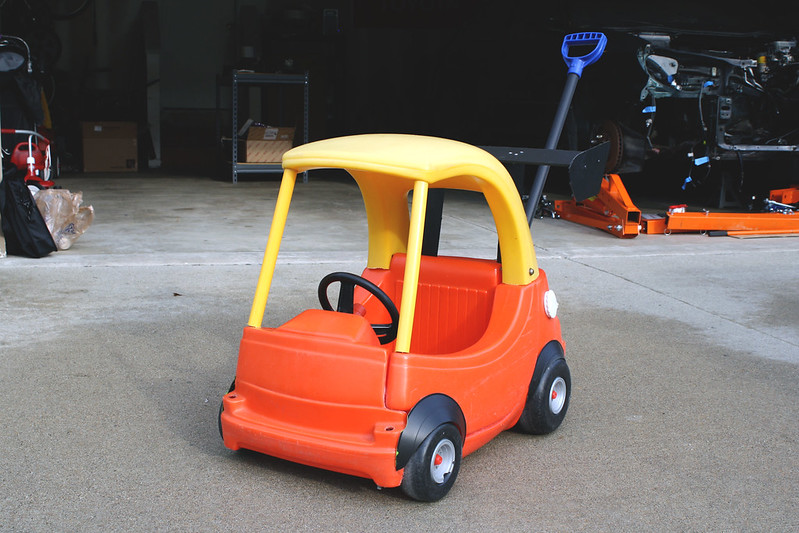 The first order of business was to cut the axles down to the proper length. I was able to find the original red axle nuts at Lowe’s thanks to a tip from a friend, so those were a nice touch. I gave the wheels a quick coat of silver paint just to spice things up a bit before installing them on the car. The fender flares were painted matte black and glued in place. 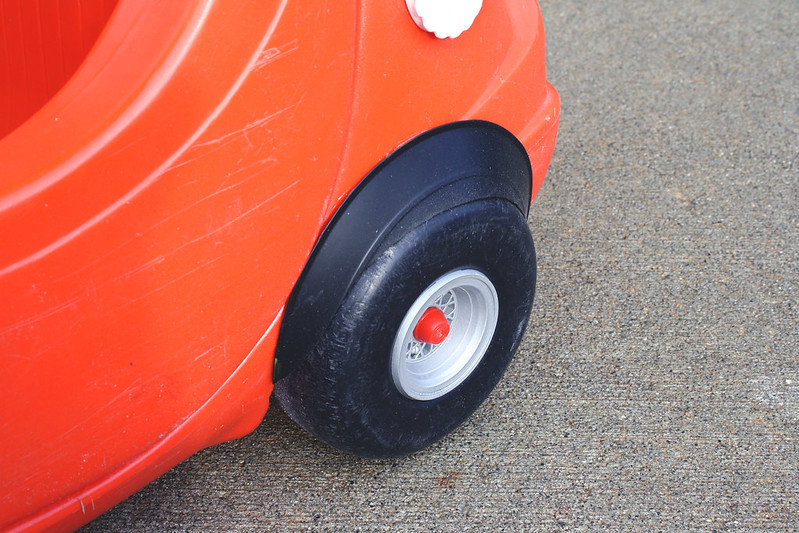 I had originally made a trunk out of a flat piece of plexiglass for the rear wing to be mounted to, but I wasn’t happy with how flimsy it turned out to be. Concerned about downforce on the end of the back straight, we ultimately decided to sacrifice some height in order to chassis mount the wing directly to the car via metal rivets. 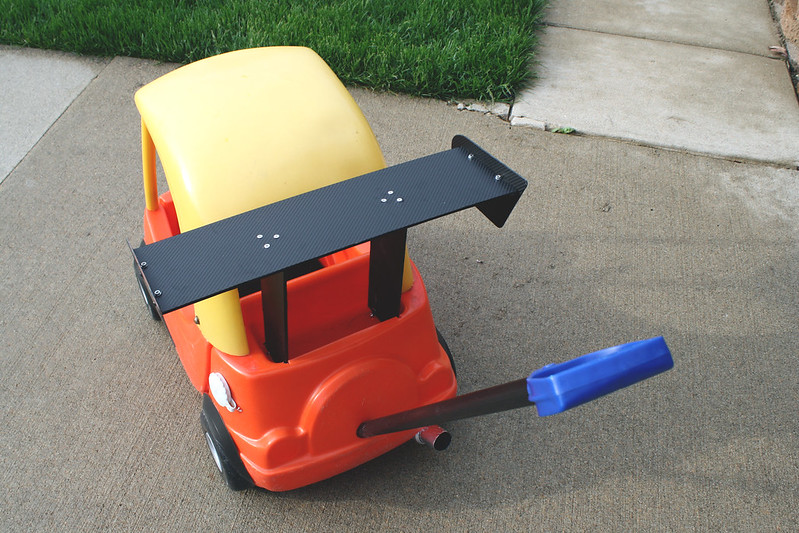 I lost some of the hardware I purchased to mount the wing over the winter, but since I was working late into the night on Saturday before the event, I was kind of in a bind. I just happened to have some metal rivets left from the Evo’s JDM rear bumper install that were the perfect size. 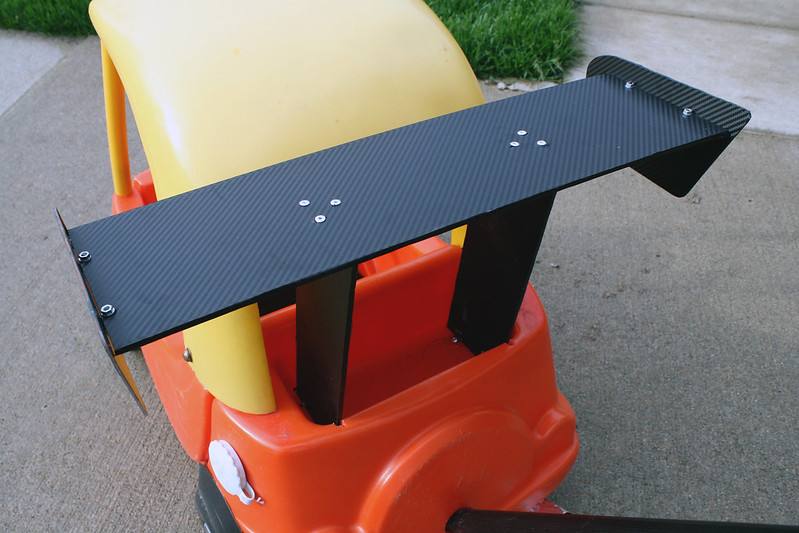 My wife Alicia came out to snap a photo of me hard at work on the car around 11PM or so Saturday night. I know others were doing the same thing in their garages, but probably not on a car this size… 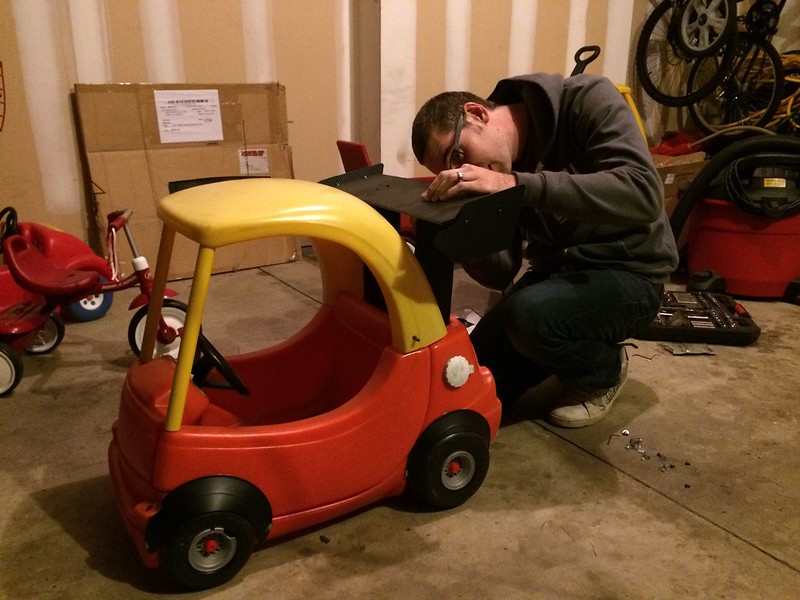 The other main issue that needed to be sorted out was the floor. With the car this low to the ground, Kinsey would no longer be able to move it with her feet. The solid front axle runs through the front of the car, and I was worried about her legs getting hurt by coming in contact with it. I ended up cutting and mounting a plexiglass floor to separate her feet from the drivetrain and the pavement speeding by beneath her. I ended up painting it black as well. I could have probably sealed it up a lot better, but the car is only driven during the summer in dry conditions (it does run slicks after all…) so we should be OK. 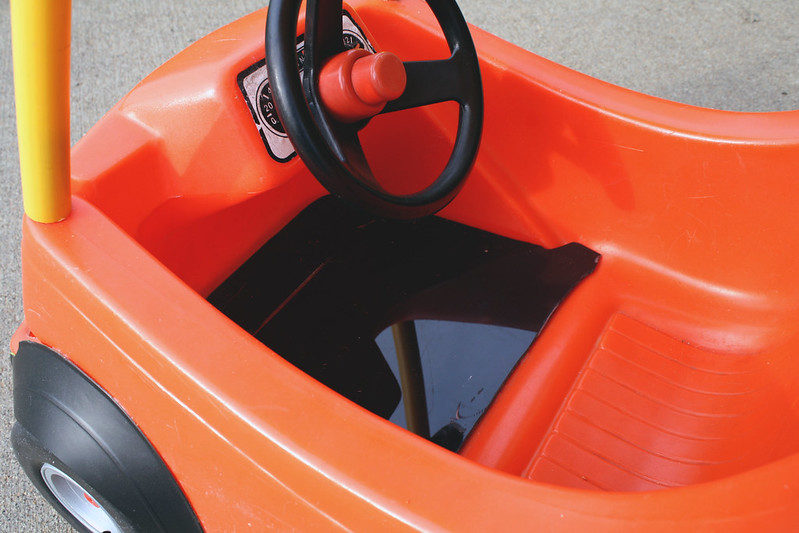 The exhaust was installed fairly hastily since it was really starting to get late. Any parent of one or more kids knows that if you stay up too late, your kids are bound to decide to wake up extra early the next morning, so it was crunch time to say the least. I hope to make a metal slip-mount hanger system for this at some point, but the glue held it in place enough to get us through the day. 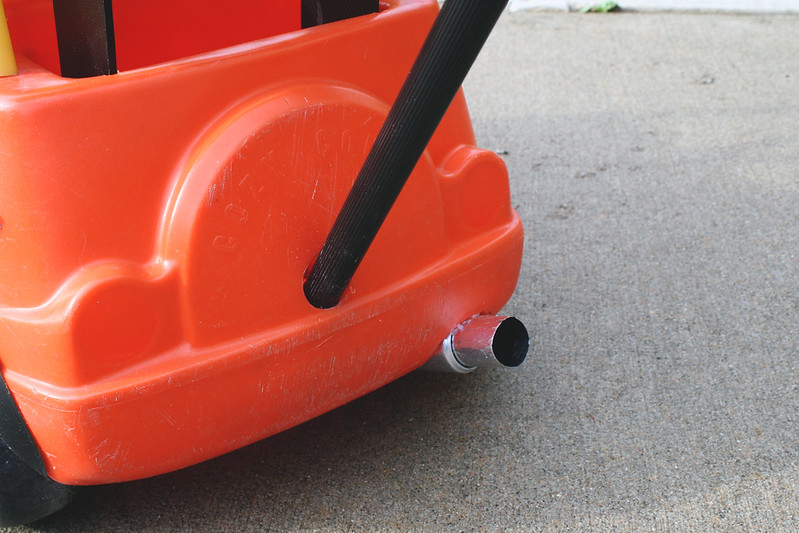 If I have learned anything as a parent of a toddler, it’s that hunching over and pushing your kid around the neighborhood can get old really fast. I managed to break both of our snow shovels during the horrendous winter we had this year, so I decided to drill a hole into the back of the Coupe and mount the handle from the snow shovel to the chassis. This comes in handy for mom and dad when pushing (or drifting) the car around the neighborhood.

I was a bit nervous when we arrived at the BBQ. Kinsey was obviously asleep when I finished the car during the wee hours of Sunday morning, so I didn’t even have a chance to test it to see if it would even roll. I was kind of worried the handle would snap, a wheel would fall off, or the cockpit would be too small for Kinsey (now nearly two years old) and she wouldn’t even want to be in the car at all. Fortunately, the car held up great and Kinsey loved driving around the meet in it.

Here are some photos that people snapped of the car during the course of the day. Many thanks to the people that took these photos for us! I have to say, Kinsey’s car got far more attention than any of my cars ever have! 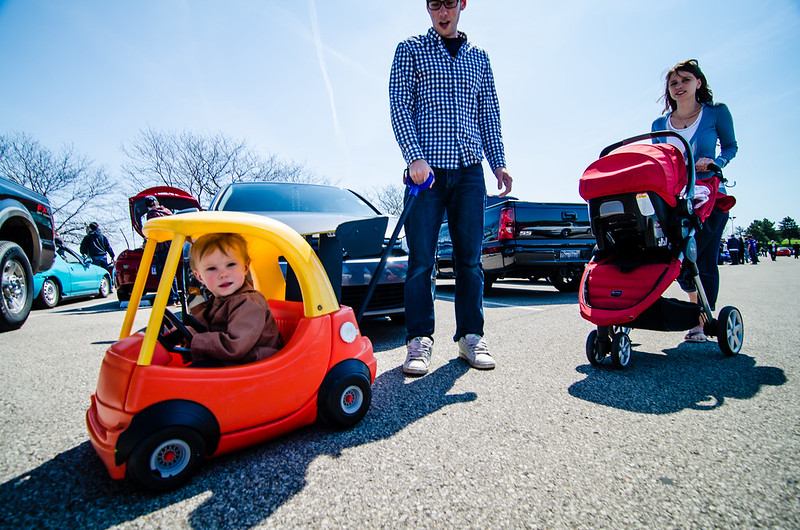 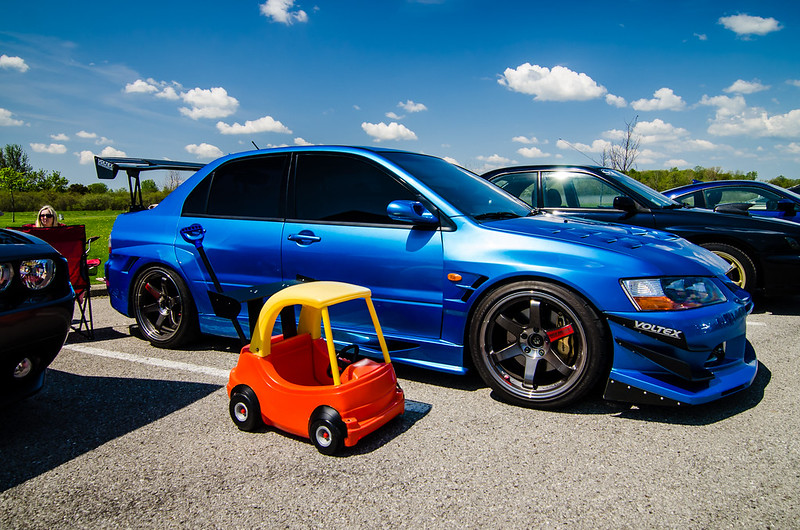 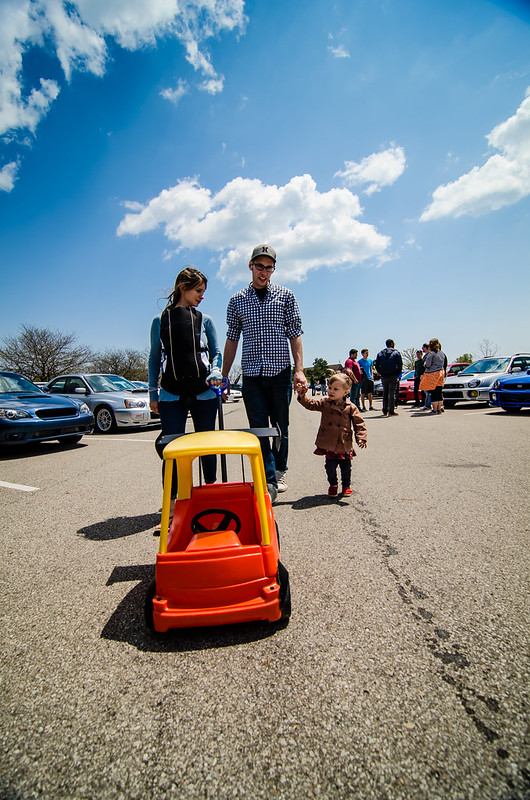 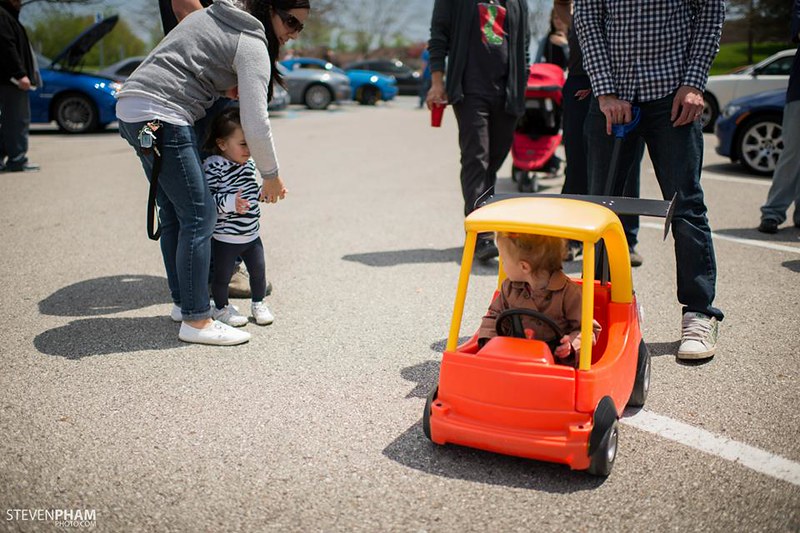 It has become somewhat of a tradition to have a “car limbo” at the XceedSpeed BBQ. This involves a limbo bar being set up and people driving their cars under it to see whose is the lowest. It inevitably becomes a Miata contest, and is a bit strange overall, but entertaining nonetheless. People even go so far as to have other people sit on the car and let the air out of the tires to get just a bit lower… 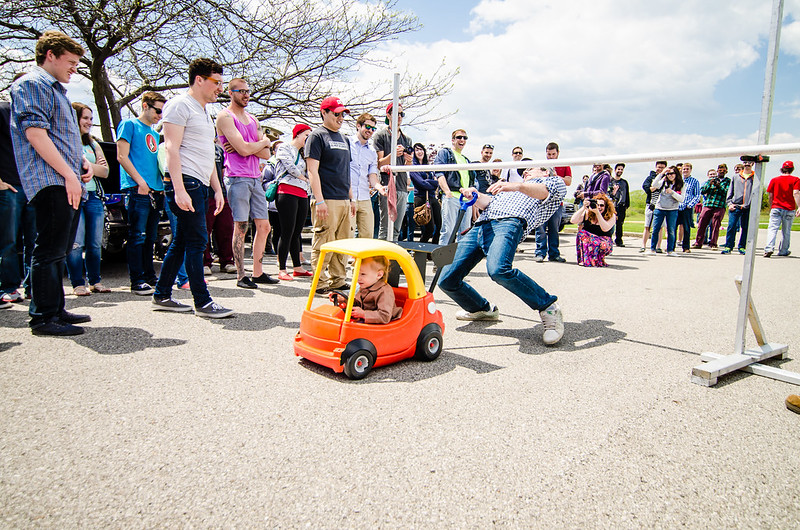 We needed to go just a bit lower, so I had to step in and add some additional weight: 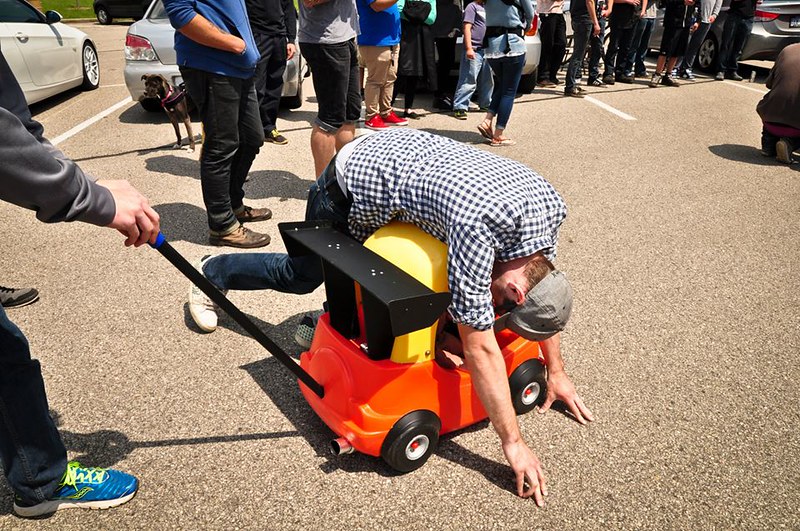 In the end, it was a great event as always and I had a blast cruising around with the girls showing off our build. It’s a great feeling to have a long-term project come together and to be able to take it out and enjoy it when the weather finally clears up. Much like the real thing though, a project car is never done. We’ll probably enjoy it as-is for a while before we tear into it again, but there will always be things to upgrade and enhance.

Thank you to everyone who has followed along with this project. Kinsey and I really appreciate all of the support and positive comments. We will probably pass the Cozy Coupe on to Kinsey’s sister Hattie as she continues to grow and look into building something with a bit more power (hint: think Power Wheels. Please Mom, can we?!)

I’ll leave you with a couple shots of Kinsey enjoying cruising in the completed Coupe around the neighborhood last night. 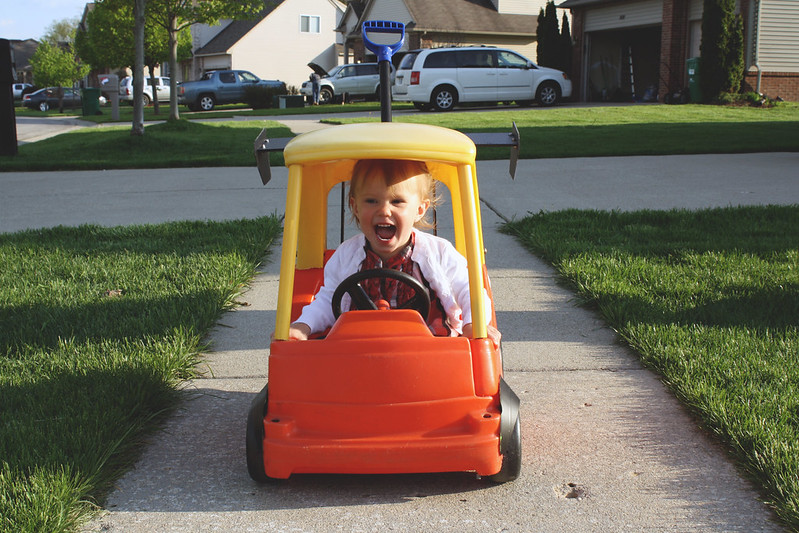 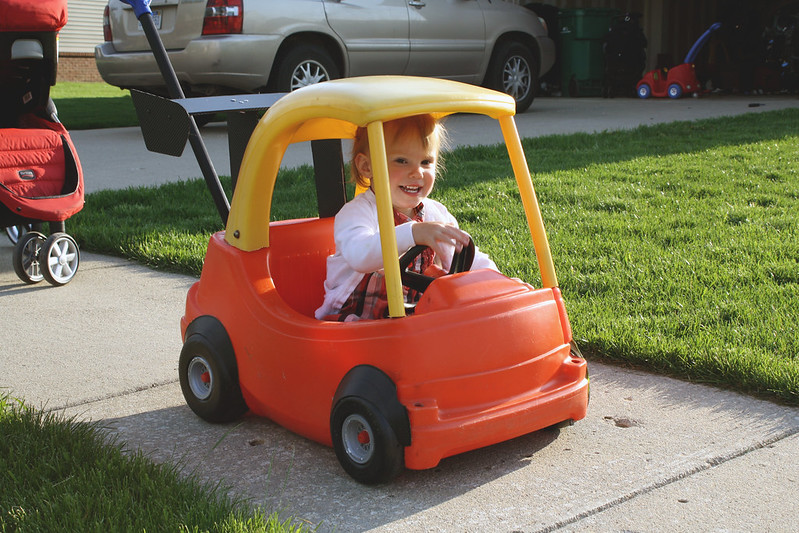 17 Responses to Cozy Coupe Project Part 4: On The Road!