I didn’t spend much time in the garage this week, but I made a little bit of progress. With the engine and transmission test fitted in the car, I measured for the one piece driveshaft and shifter extension.

After test fitting the center console, I found that positioning the manual shifter through the existing hole for the factory automatic transmission linkage left the shifter too far back, so I had to cut a new hole in the transmission tunnel for the shifter to reside within. A hole saw bit made quick work of this: 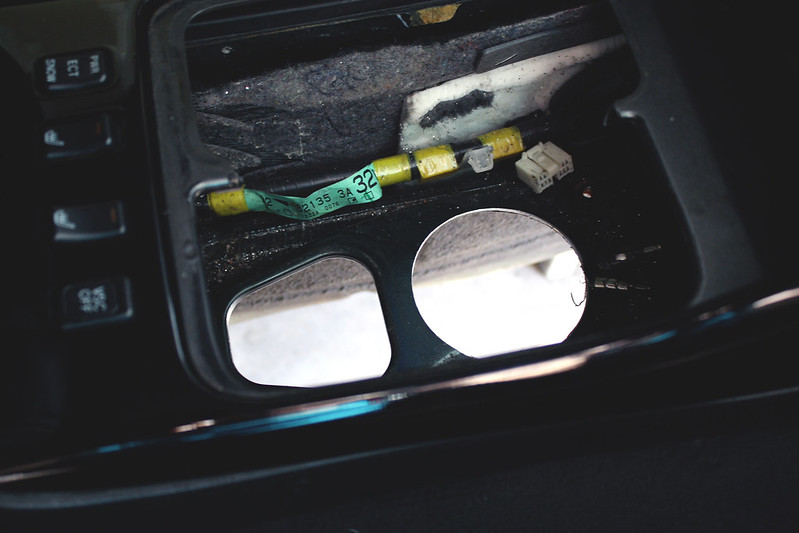 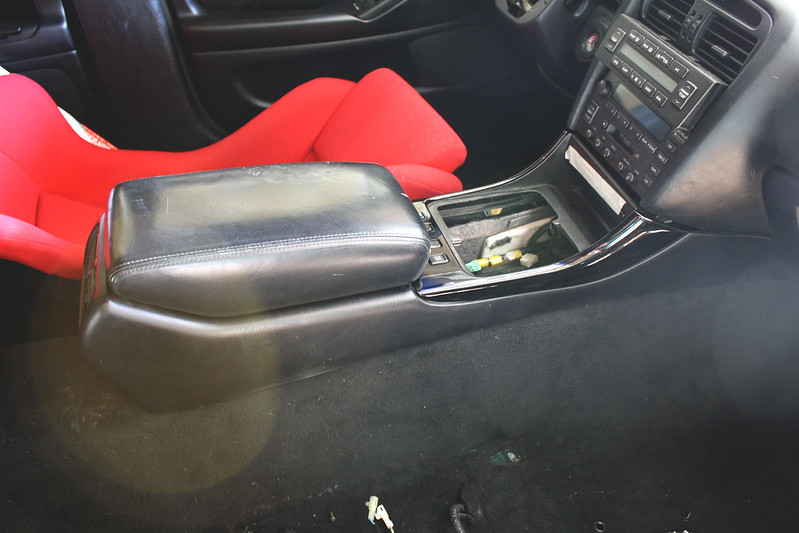 While the engine was in there, I also noticed that the heater core fittings are contacting the back of one of the turbo assemblies. I’ll have to find a way to modify this to clear (or just bolt on a big single- hmmmm…) 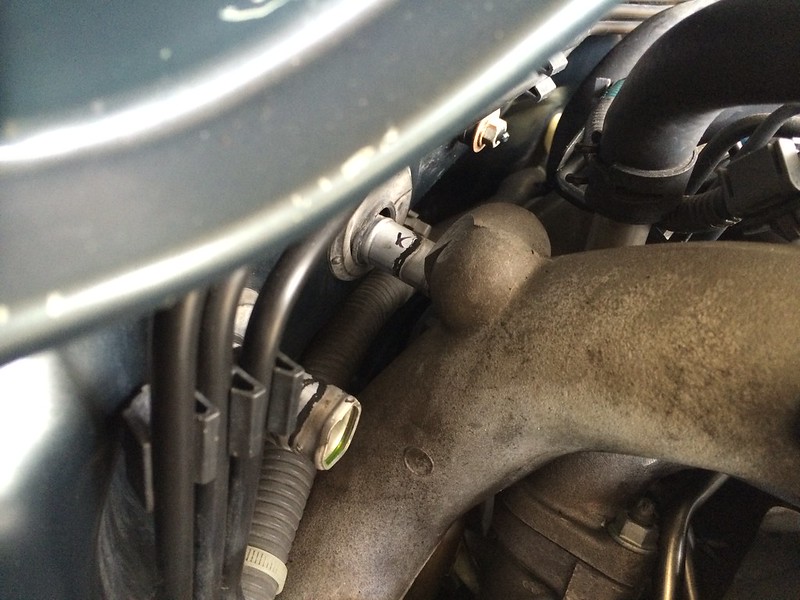 I mocked up the Drift Motion/ Energy Suspension transmission mount and after a bit of grinding I was able to get it to fit perfectly. The back side of the factory transmission crossmember had to be ground down to allow for the mounting plate to sit correctly and some new holes needed to be marked and drilled, but otherwise it went together pretty easily. 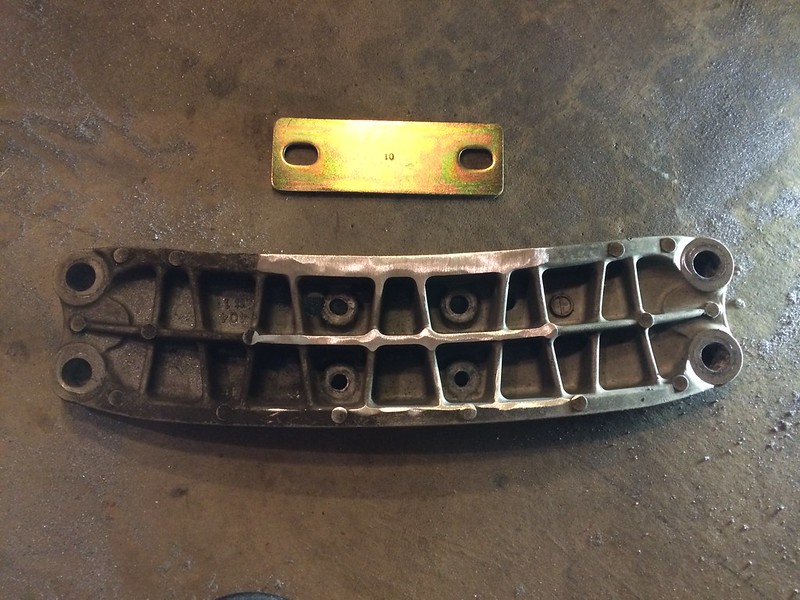 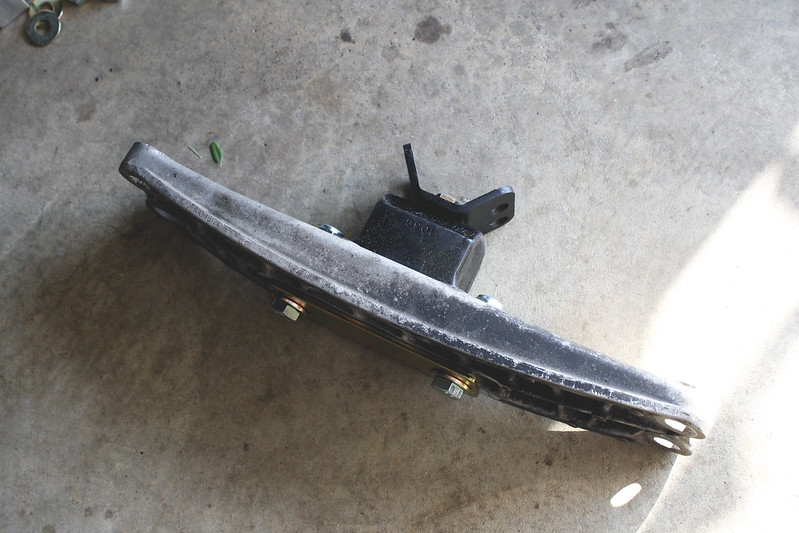 After the necessary measurements were taken and I was finished mocking things up, I pulled the drivetrain back out of the car and began disassembly. My next step will be to go through the engine and transmission to install all of the maintenance items I’ve collected. 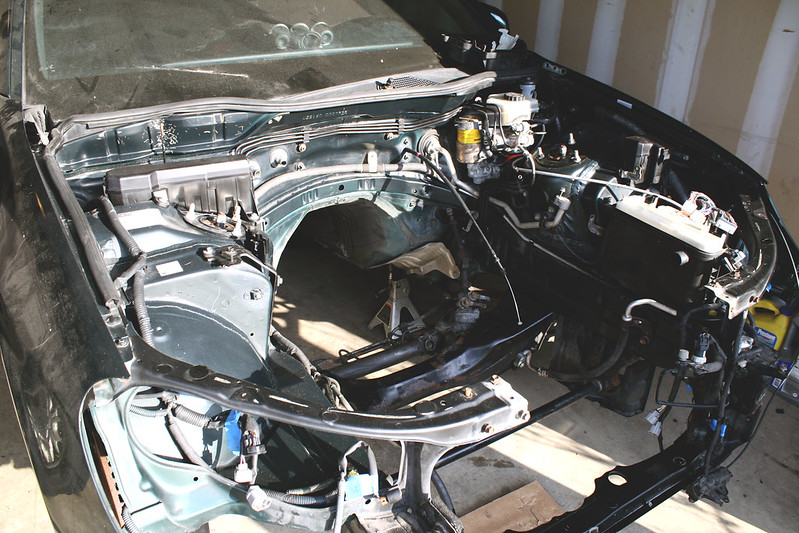 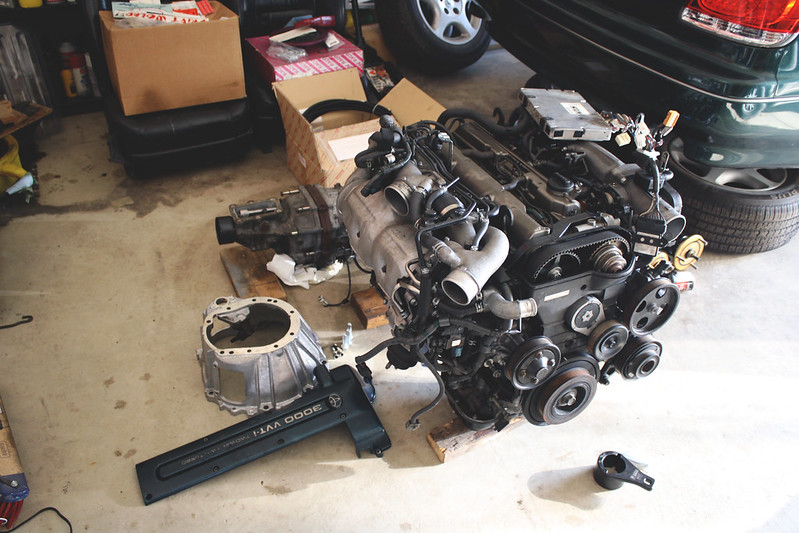 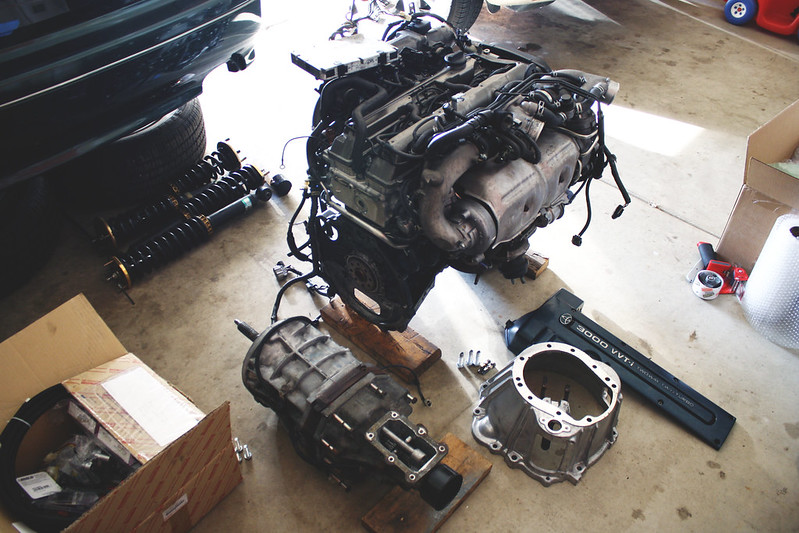 I pulled the case of the R154 apart to remove the shifter housing and linkage. I shipped these pieces out to be extended 2.5″ at Freed Engineering out East and should hopefully have them back sometime next week. 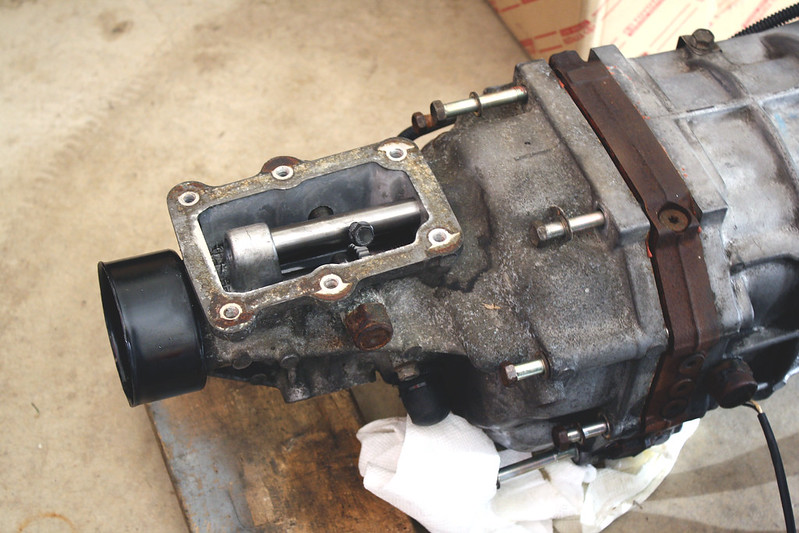 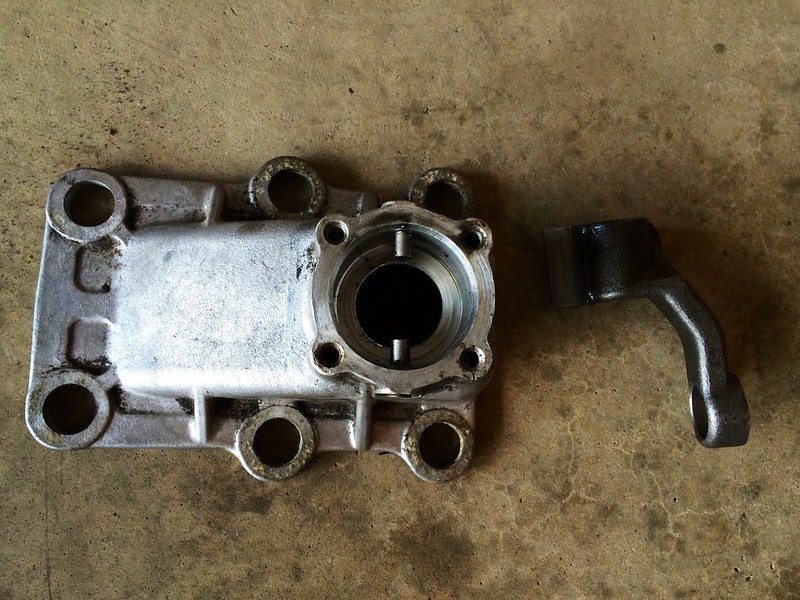 The tool to remove the crank pulley arrived so that I can replace the timing belt: 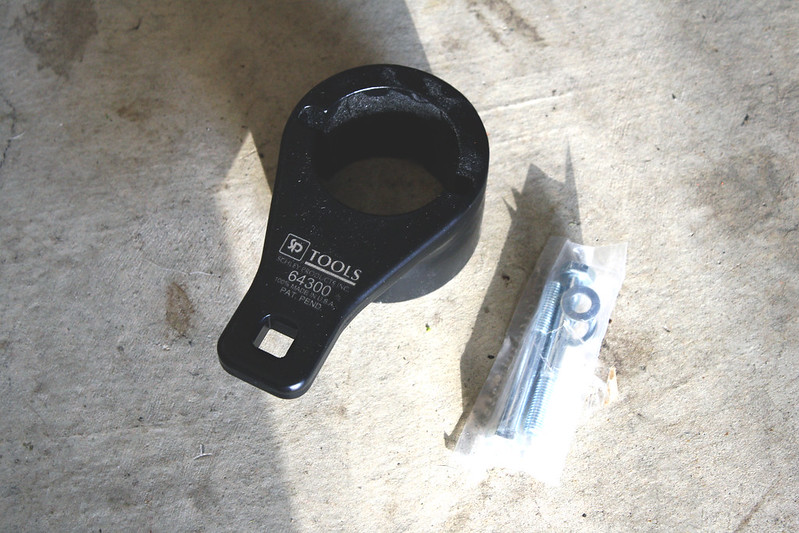 I also scored a cheap pair of LED tail lights from a friend. One of them needs a resistor replaced, but I couldn’t pass them up for the price. I’ll have to see if I can get them to work at some point later on, but they look cool on the car in the mean time. 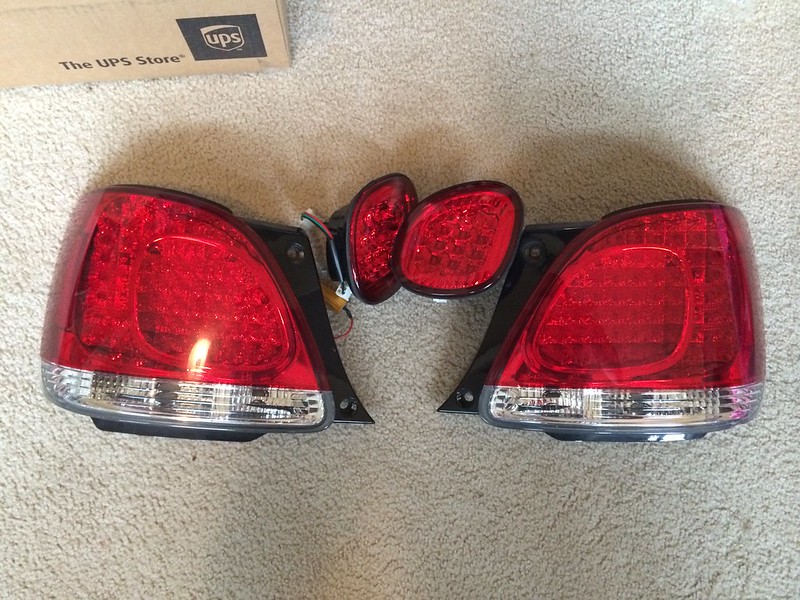 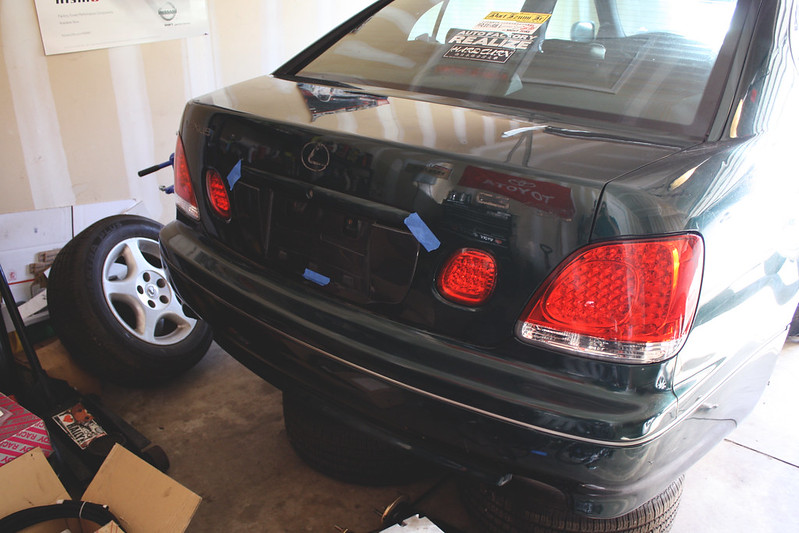 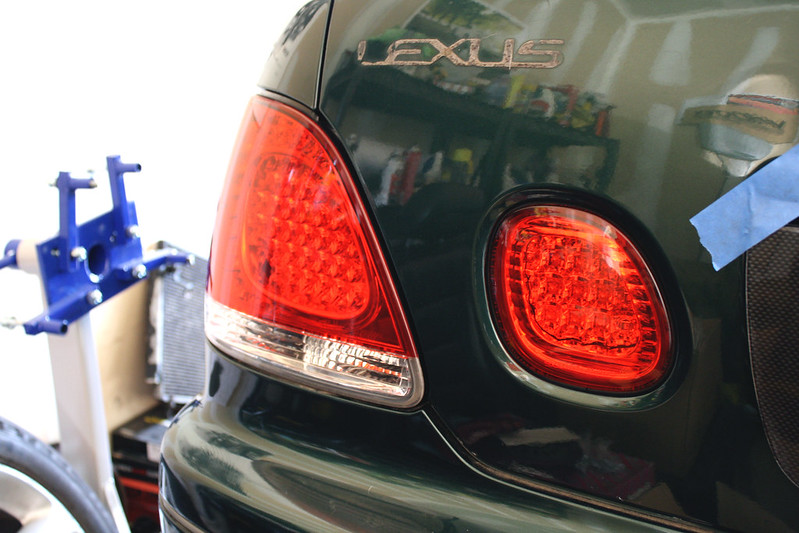 I’m hoping to spend my time on engine maintenance and cleanup this week. I should be able to move ahead with the timing belt service, water pump, thermostat, and miscellaneous gaskets and seals. As soon as that’s complete I can begin the final assembly of the engine and transmission.