Posted on October 5, 2015 by camryonbronze

Somehow it has been over a month since my wife Alicia and I drove my S13 to Wisconsin for Final Bout II. I have no idea where the time has gone, but I figured it was time to finally sit down and attempt to document our trip.

We dropped our daughters off with their grandparents on Wednesday night and spent the rest of the evening packing and preparing for the trip. I was feeling pretty good about how the car had been running all summer, but it’s always a bit nerve racking to drive the S13 on a long trip like this. When we got home around 10PM I had to install a replacement axle on the passenger side of the car. I had just found that the CV boot was torn while I was under the car a week prior and had a heck of a time finding a replacement axle. Nothing like things coming down to the wire! But fortunately everything went together smoothly and after a quick test drive the car seemed to be more or less ready for the long trip. 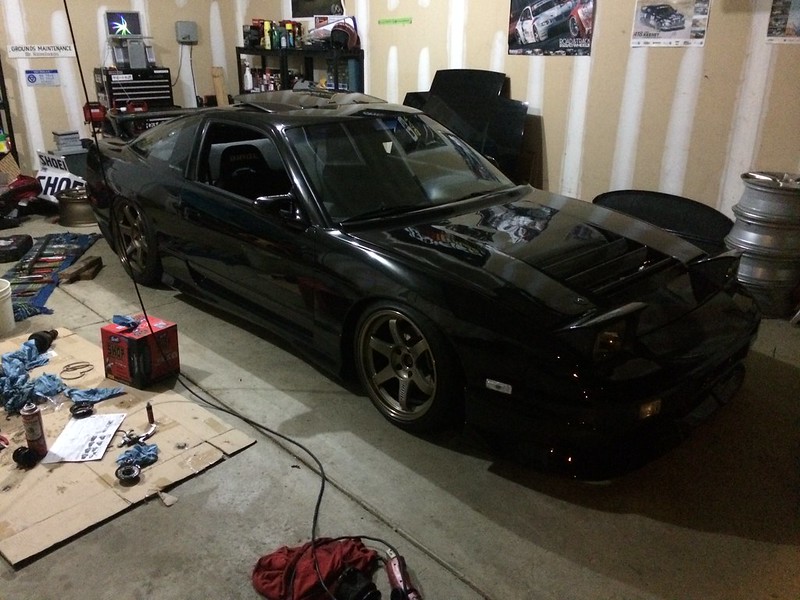 On Thursday morning I spent some time washing the car and getting it all packed up. I always wash my car before we take it on a road trip even though it always manages to rain at some point during the drive, but it’s become a bit of a tradition of sorts at this point. I saw the storm system on the radar that would come down from the North and clip us on our way through Lansing to the West, looked the sky over for a minute or two, and fired it up to head to the grocery store for some supplies. 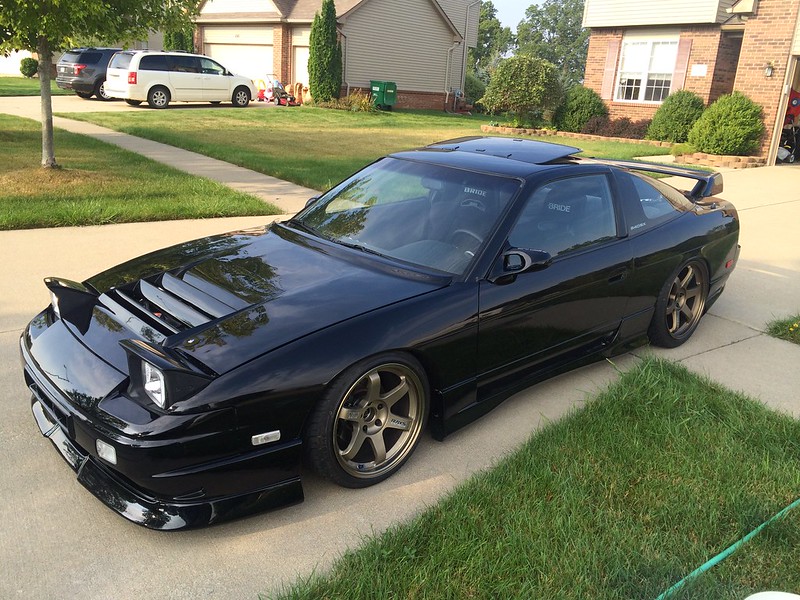 It was already feeling pretty hot out on our short trip to the store. The humidity in the midwest never ceases to amaze me. It’s gotten to the point where I can’t even imagine what it would be like to own an S13 with air conditioning that actually works, but it must be incredible. After a quick parking lot selfie, we were officially on our way… 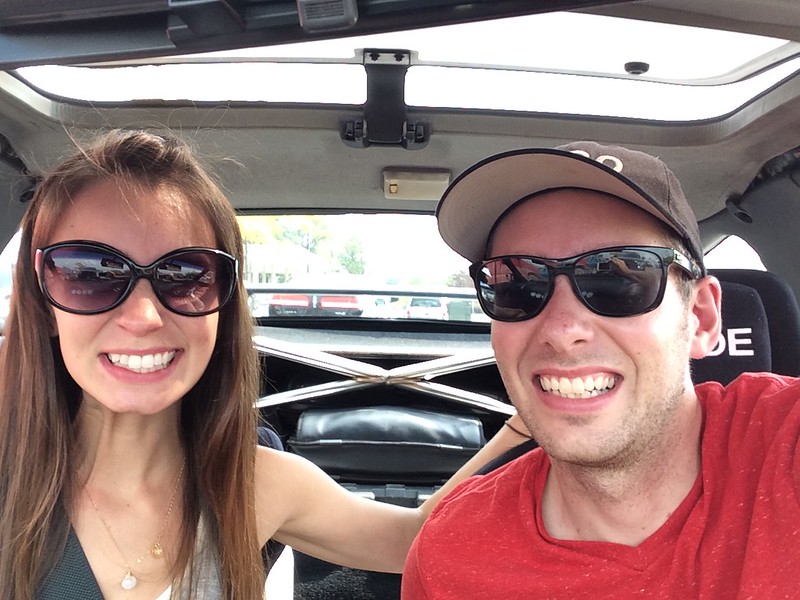 For about twenty minutes. Then we hit dead-stop traffic on I-96 and that rain storm I mentioned earlier decided to roll in. That meant sitting in traffic in mid-80s temps with the windows up while rain made its way into the various leaky seals all around the interior of my car. Fortunately things got moving again after about twenty minutes or so. We swung off the first exit to get Alicia her Starbucks drink and then finally got rolling, eventually clearing the rain and returning to the hot sunshine we had faced earlier in the day. 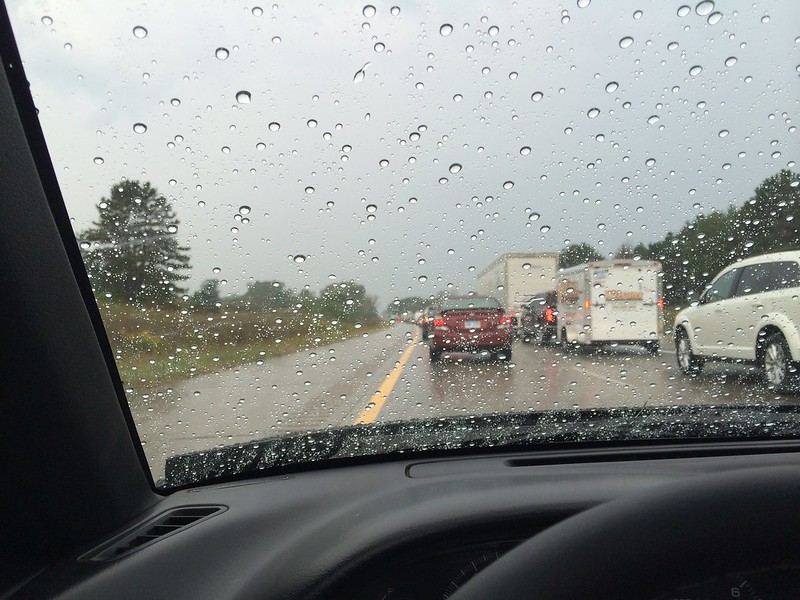 The stretch we drove on Thursday was much more miserable than I had imagined. There’s just no escape from the heat and humidity in my car, especially when you’re sitting on top of the exhaust. We stopped near Battle Creek, MI for some McDonald’s and saw a really bad accident on the other side of I-94. I guess a semi truck rear ended a bunch of cars stopped for construction and one person was killed. The freeway was littered with totaled cars and tipped over semi trucks and traffic was probably backed up for over five miles. Grateful that luck was on our side and we weren’t wrapped up in that freeway closure, we continued on towards Chicago. 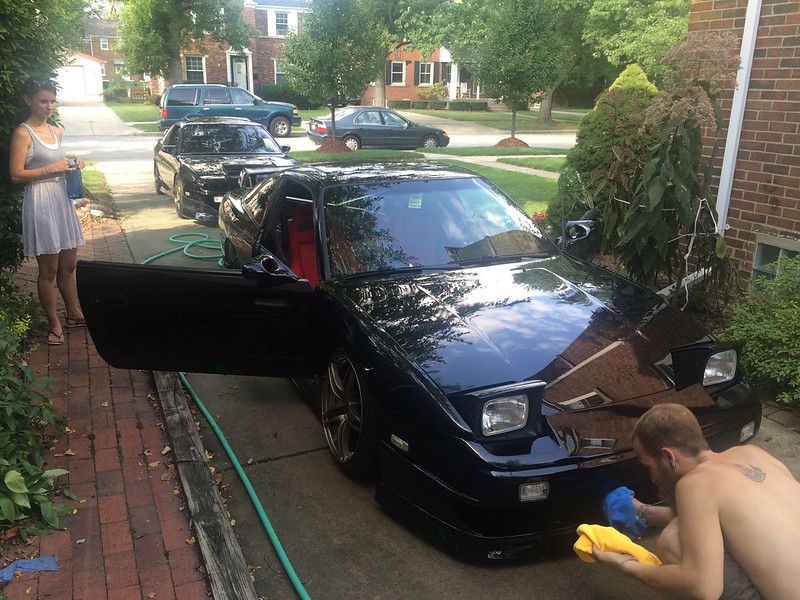 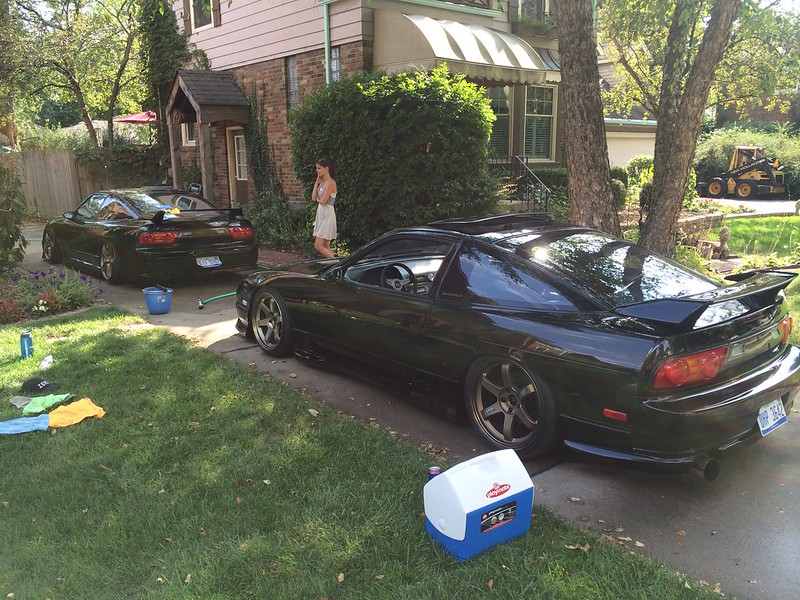 A bit after entering Indiana, we stopped at my friend Tony’s place for another break. It was nice to sit in the shade, stretch our legs, and drink some cold water in Tony’s front yard while he washed his car ahead of the event. My car had gotten pretty trashed during the rain storm we passed through, so I decided to hose mine off as well. After thanking Tony and making plans for the next morning, we knocked out the final hour to Chicago (thanks to rush hour traffic) and arrived at my brother and his wife’s apartment in Wicker Park. 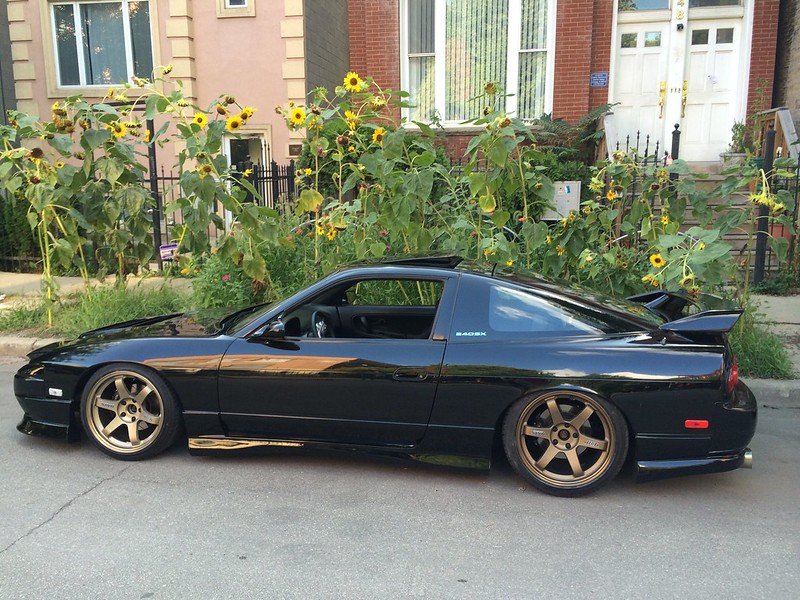 My brother was a bit concerned about leaving my car on the street outside of his place and wanted to park it in his rental garage down the street. After leaving a nice gouge in the huge speed table near the apartment, we determined that the speed bumps outside the garage were too high to attempt to clear. We ended up parking the car in the alley behind his place, crossing our fingers, and heading out to dinner. It’s always fun to spend some time in Chicago. 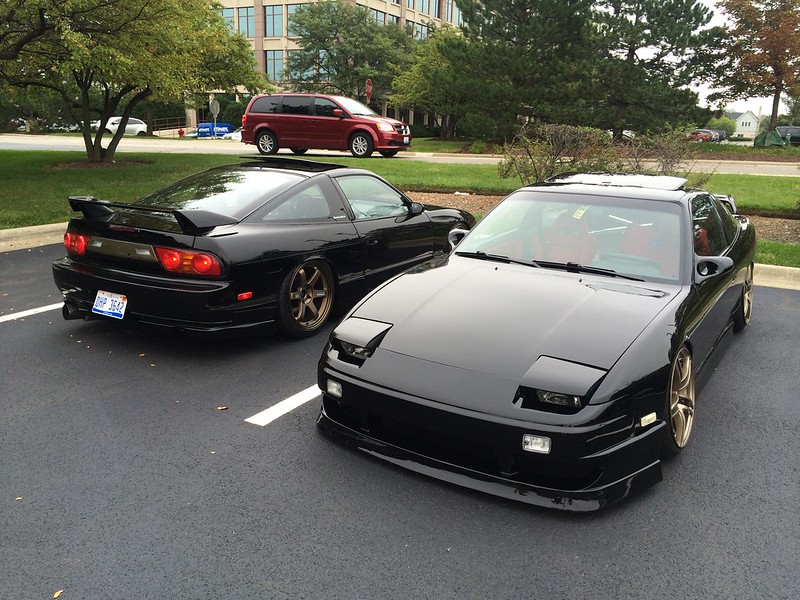 Friday morning arrived a bit too soon and it was time to head North towards US Air in Shawano, Wisconsin where Final Bout takes place. Last year a bunch of people all drove the four hour trek up to the track together on Friday morning, but this year most of the teams chose to drive up to Shawano on Thursday night. Fortunately we met up with Tony at a hotel North of the city so that we could cruise up together. After making sure we had enough cash for the tollway (but forgetting to be sure we had change, resulting in a missed payment for an unmanned toll booth that I still need to take care of) we hit the road to our next rendezvous point. 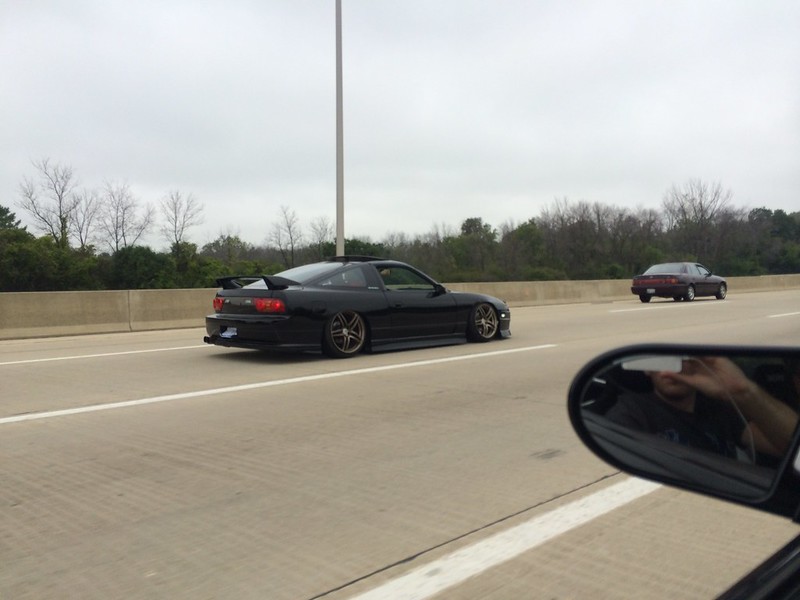 After nearly being taken out by a truck tire that exploded directly in front of us, Alicia, Tony and I exited somewhere just inside Wisconsin at Cracker Barrel. Shortly after getting out of the car the remainder of our party arrived: Benson and Nadine Hsu, Slide Squad Mark, and none other than Mr. Big Bad BH World himself. I had the pleasure of meeting Benson and Nadine at Final Bout in 2014 and had kept in touch with Benson via the internets. Benson told me that he really wanted to stop at Cracker Barrel and that they would all be driving up to the track Friday instead of Thursday like most people, we decided to meet up. 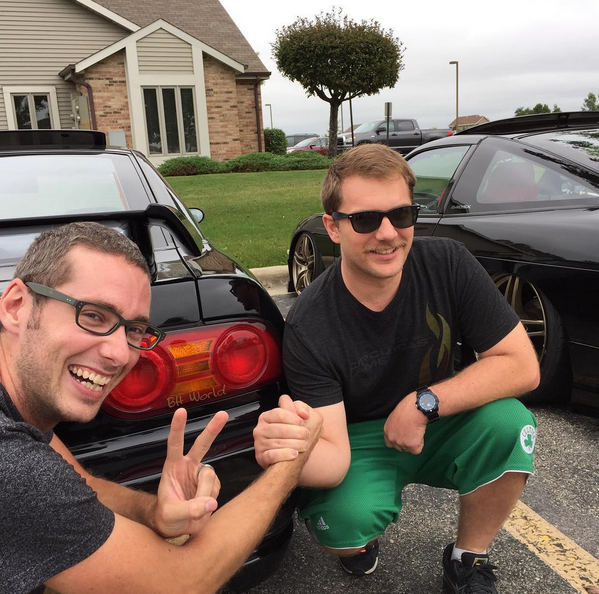 After a handshake with BH and Mark, it was time to take some selfers. It was quite an honor to meet Brian after all of these years- a true legend! Complete with mustache. 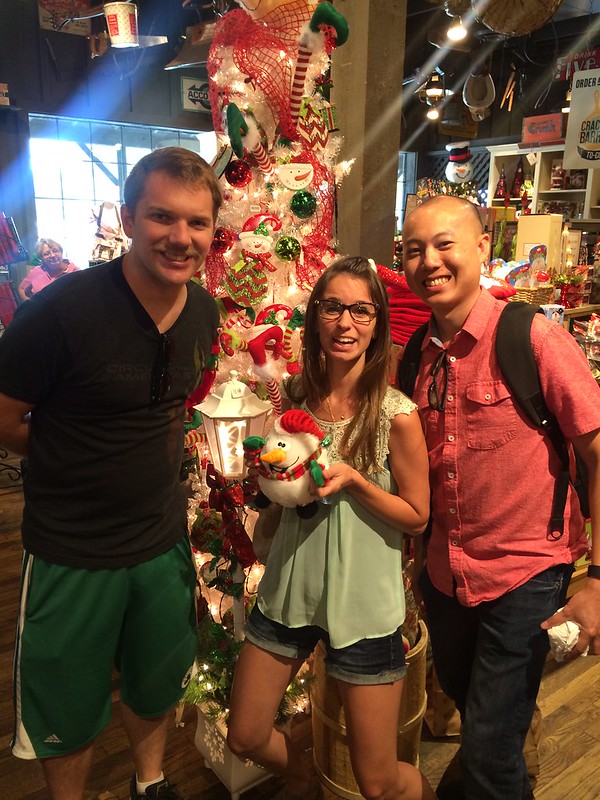 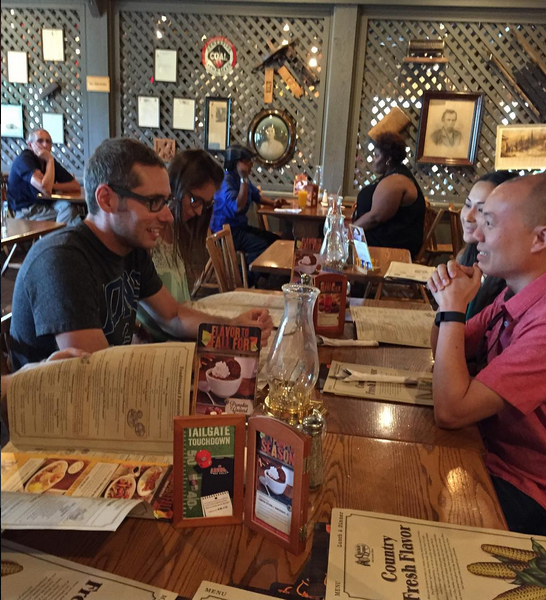 After enjoying some good old fashioned family dining and picking up some Badgers souvenirs for Brian, we hit the freeway hard to try to get to the track on time without Benson getting in trouble. Nadine was the MC for the competition and Benson and Mark were judges, so they needed to be at the track by a certain time to do some official stuff. We misjudged how long of a drive it was to the track and didn’t make it in time, but we did arrive without incident! Some cloud cover made the drive a bit more bearable than it was on Thursday. 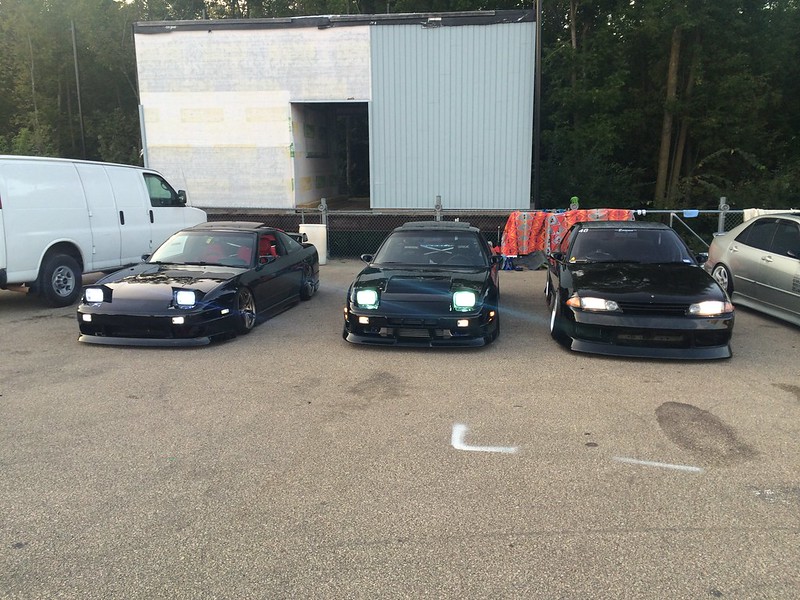 So this was it… the Final Bout (again). We purchased our wrist bands and made our way through the pits to see all of the cars and their respective drivers. I immediately made a bee-line towards the ~ESSENCE~ pits to say hi to my friend Jimmy Yates and check out his R32. I met Jimmy at the first Final Bout and we talk almost every day. It was also really cool to meet Andrew and Anthony in person as well as I had only talked to them on the internet prior to this. These dudes drove all the way from Texas (two of them in their drift machines) to hang out and compete. Talk about nerve racking! I had a much shorter drive and wasn’t even drifting. I can only imagine how stressful that long of a drive would be. 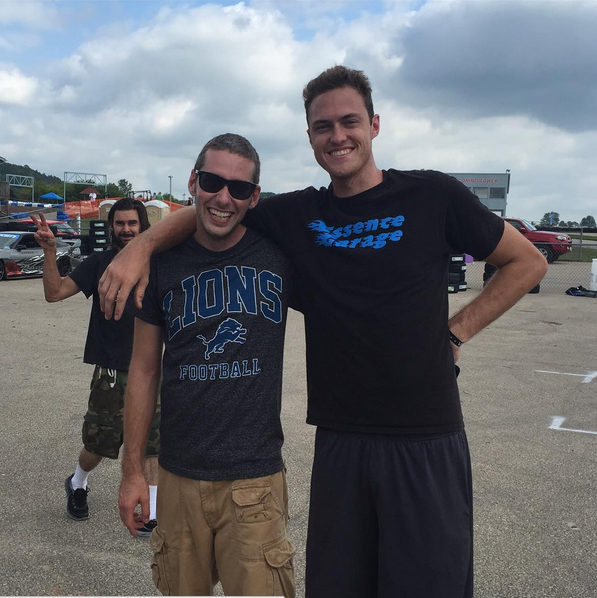 After hanging at the track for the afternoon and into the evening, we checked in at the hotel and got showered and cleaned up. Then Alicia and I met up in the lobby with Andrew, Justin, and Anthony from Essence Garage as well as Tony from BLOODRUNNER to head next door for some delicious Arby’s. Somehow they were out of roast beef- that was a first. While we were there we met up with Joe (Itai blue 180SX with bronze TE37s) and Matt (TrickyAB) from Toronto. I text with Joe every day and have known Matt from Zilvia for years, so it was really nice to meet those guys in person!

At this point it was pretty late. I killed some time hanging with friends and walking around the parking lot before heading in to get some sleep. We planned to wake up early in order to get a spot in the parking lot at the track the next morning.

That’s all for now- I’ll have Part 2 up later this week! Thanks for reading.