Posted on October 7, 2015 by camryonbronze

It was largely anticipated that Final Bout would be much larger in 2015 than it was the previous year. That prediction proved to be true. The size of the parking lot at US AIR was an immediate concern as the spectator lot was nearly at capacity in 2014. It was announced a week or so before the event that there would be an overflow lot in downtown Shawano about two miles or so from the track and a shuttle would be running to and from the track. After hearing this, Tony and I made a plan to wake up early to be sure we got a spot somewhere in the lot.

It felt a bit self-centered and egotistical to make my wife wake up at 6 AM just to go park in a parking lot, but we had suffered a long and grueling drive in what I have previously stated may be the world’s worst car. What’s the point in suffering through driving that thing if we aren’t able to park it at the event? If we ended up off-site we may as well have been driving our Highlander and brought the kids with us (which would have been fun in a way, but not in a lot of other ways.) 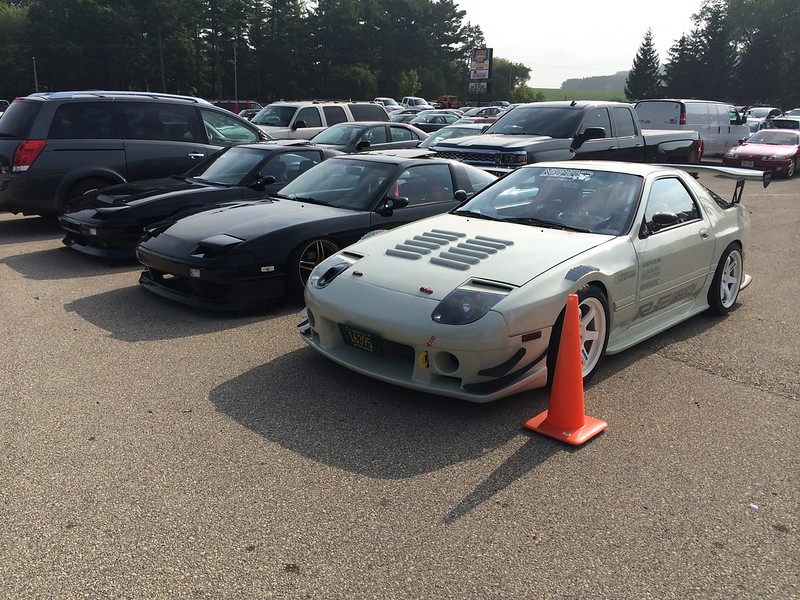 I was impressed with how many people were already in the lobby getting breakfast at about 7 AM and even more impressed with how fast Alicia was able to get ready and get out the door. When we arrived at the track the lot had already begun to fill up. Tony and I got a bit creative with the cones (without Pat seeing us thankfully) and got a couple spots at the end of the row near the pit entrance. We were supposed to save a spot for Kou and his FC (which is arguably the best in North America) as we had been chatting with him for months leading up to the event. Luckily we happened to be in the lot when he pulled in and we bumped the cone out a bit more to fit his car next to ours. Pat must know it’s one of the coolest cars around because he looked the other way as he drove by in his Gator. 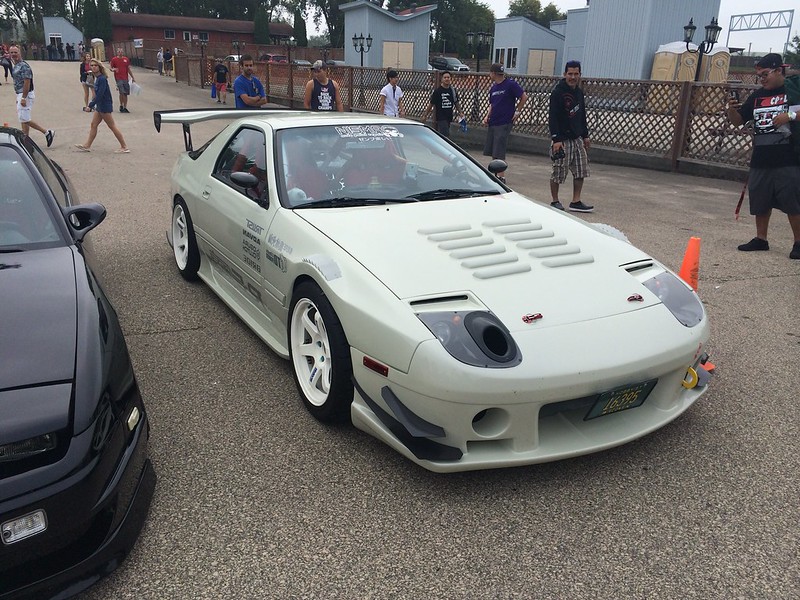 Every time I see Kou’s FC it completely blows me away. It also helps that he is one of the nicest, most soft spoken and genuine people I have ever met. I had the pleasure of writing Kou’s feature story for his car when it was on the cover of the last ever issue of Modified Magazine. I wish I had met him and seen it in person before then, but I think it still came out OK. It was really fun to have our cars together again.

Here is an AE86 I really like unrelated to what I am rambling about in the paragraphs above and below. 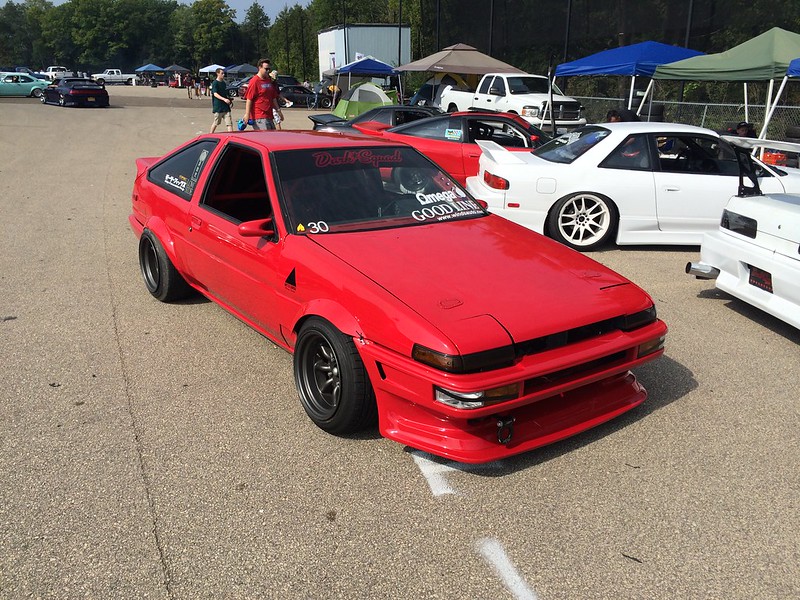 To be completely honest, a lot of Saturday was a blur. Final Bout seems to take place in a parallel universe where you can see and interact with the people of the internet in person and time passes at an accelerated rate. I remember that it was very hot and Alicia and I had to make frequent trips to the car for water and snacks to avoid passing out. Alicia couldn’t believe that none of the people at the event seem to eat, sit down, go to the bathroom, or sleep. I guess that’s just the aura of Final Bout- it’s so exciting to see everyone that you forget to do the simplest of things. She had the hang of it by the end, but Saturday afternoon was a wake up call for me- a good reminder that I needed to make sure my wife stayed alive all weekend, lol. 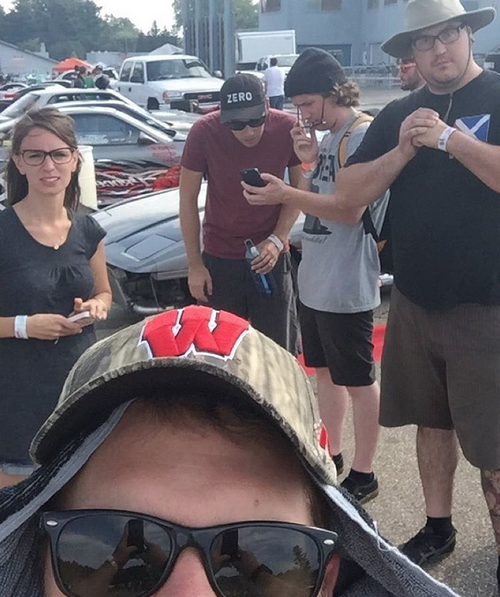 While walking around the pits before the competition we were reunited with a lot of people that we hadn’t seen since the previous year. Cody Fowler, Ryan Rieb, Oliver, Mitch, and Philstar were all among the people that I was excited to see again (not to mention many others.) One person I thought it was really cool to see was the infamous Joey Lee of The Chronicles. I met Joey at Import Alliance in 2009 down in Tennessee with my good friend Kyle who used to have the red 180SX on bronze TE37s. Joey is more or less the face of the Honda scene and said some very nice things about our cars when we met him so I have done my best to stay in touch and keep up with what he is up to over the years, being that I am a huge closet Honda fan. He’s also been a big supporter of me getting my car back and building it up again. It was cool to see Joey at a drift event in the midwest- a definite change of pace for him! 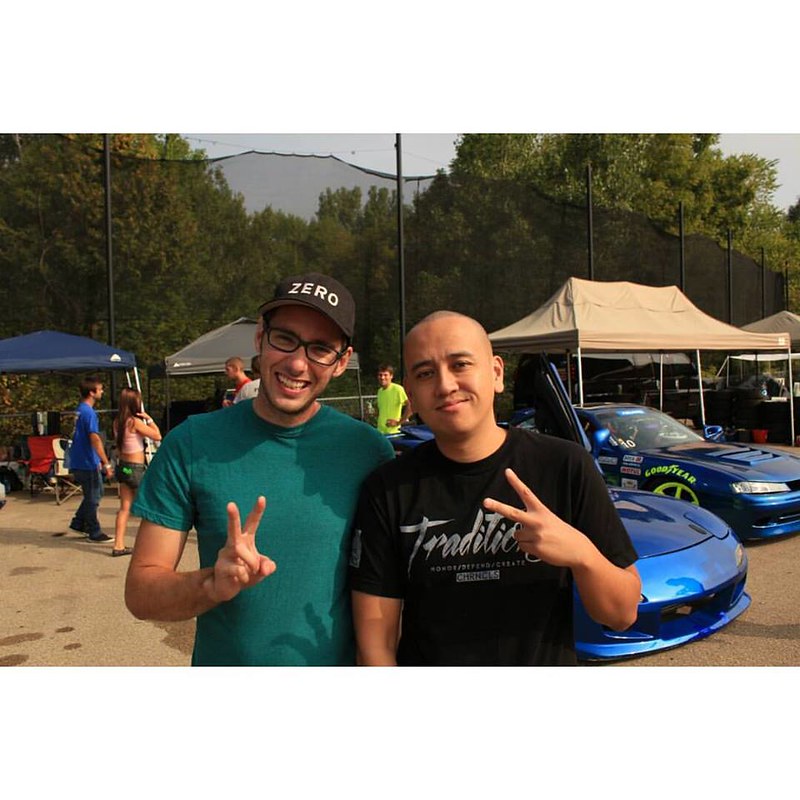 At one point when we returned to my car I noticed a puddle flowing from the front bumper. After a quick inspection it turned out to be coolant, which was not good as it was over 90 degrees F outside. It turned out to be a leaky idle air control valve coolant hose that I thought I had fixed prior to the trip. The hose clamp tore through the hose on the drive down, but luckily I hadn’t seen any overheating. We decided to leave it for the time being and grab some lunch with BH before the competition. Brian bought Alicia and I some brats for helping him get out to Final Bout which was very generous of him- thanks Brian! 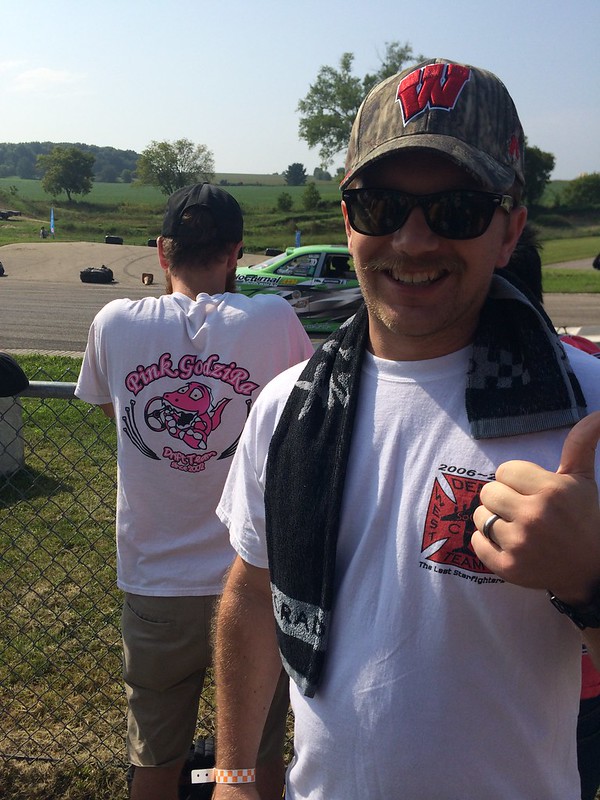 The competition is probably the thing I look forward to the least at Final Bout. Don’t get me wrong, it’s a lot of fun to watch, but I almost enjoy watching the free runs and just walking around to chat with people I only see once a year more than the actual driving. We found a spot in the crowded bleachers and watched with Tony and BH for a while which was a lot of fun. Essence did a parade lap on their second run to honor team BLOODRUNNER which was really neat. It was fun to listen to some of the kids “vaping” and whatnot in the crowd complain about it. It was also entertaining to listen to Nadine, Mark, Benson, and Rob’s commentary during the competition runs.

After the competition ended, it was time for some free runs. I was particularly excited for this as I had never been on a ride along at a drift event. In fact, Final Bout 2014 was the first organized drift event I had ever been to. I didn’t bring my helmet with me last year so I made sure that Alicia and I borrowed a couple so that we could hopefully get a ride with the Essence guys since I had become pretty close with Jimmy and Andrew over the last year. 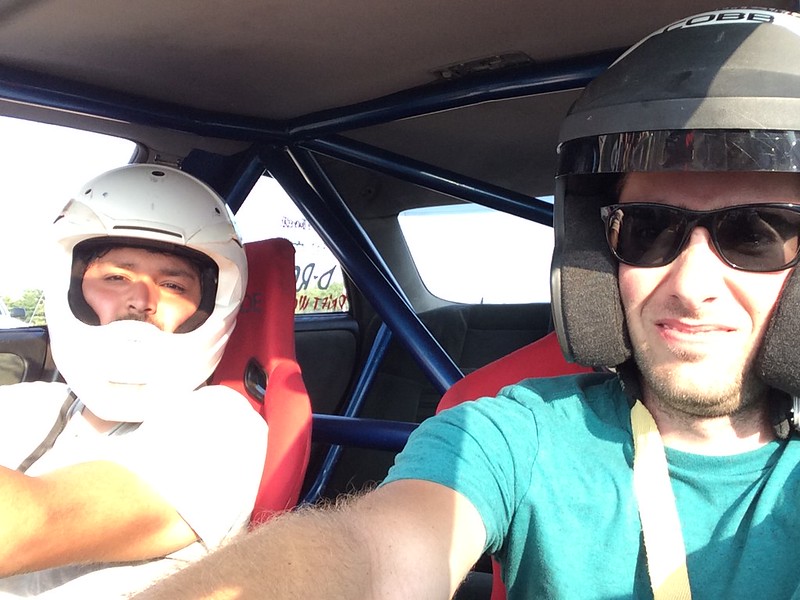 My first ride along came from Anthony (AKA @camryonchrome) in his JZX90. Anthony is a very quiet dude, but one of the nicest people I met at the event. He was more than willing to give me a ride and it did not disappoint. His car is pretty violent when it builds boost, and most of the time I couldn’t tell what was going on, but it was a ton of fun. I wish it was easier to own one of these cars here in the states because they’re a total blast. I was overcome by the smoke at the end of the run and tried to be sneaky about putting my window down, but it didn’t work. Anthony caught me and put the windows down for me. I had no idea it gets so smoky in the car when you drift. Who knew? lol 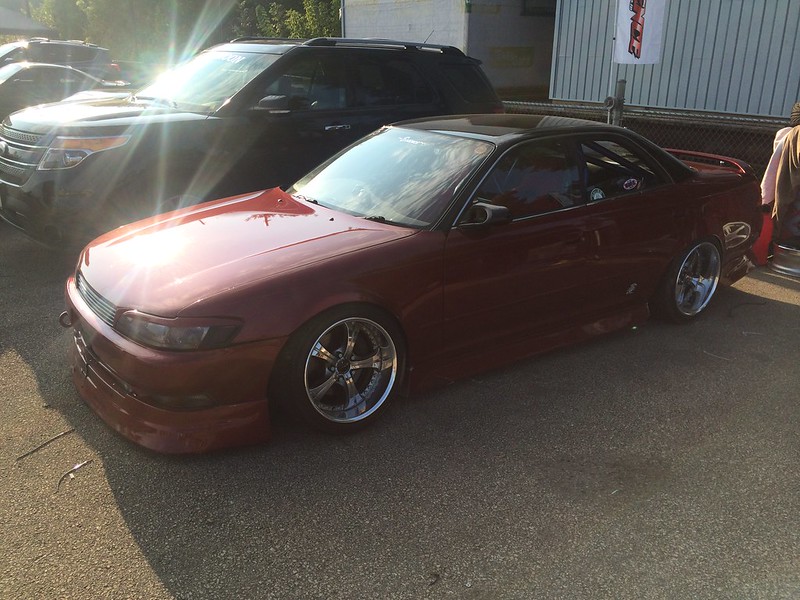 After a couple of laps we went back to the pits to the car cool down. I’m really grateful to Anthony for giving me an excellent first drift ride along. Such a cool car!

After some more spectating the day began to wind down. Jimmy drove us to the local auto parts store to pick up some coolant and a new hose to try to fix my car’s leak. I was fortunate enough to have Jimmy and my friend Loren give me a hand with trying to fix the car (Loren is the owner of my old Kouki 180SX aero and DMAX hood and has a really cool 180 that he grip races. Always cool to see him.) None of us could get the hose to go on, so I had to resort to using my secret weapon: Tony. Without hesitation, Tony pulled out his lighter and heated the hose up. He then proceeded to install it and button everything up within about ten minutes. That’s a trick I soon won’t forget. Many thanks again to Tony and the other gents that helped get my car back on the road. 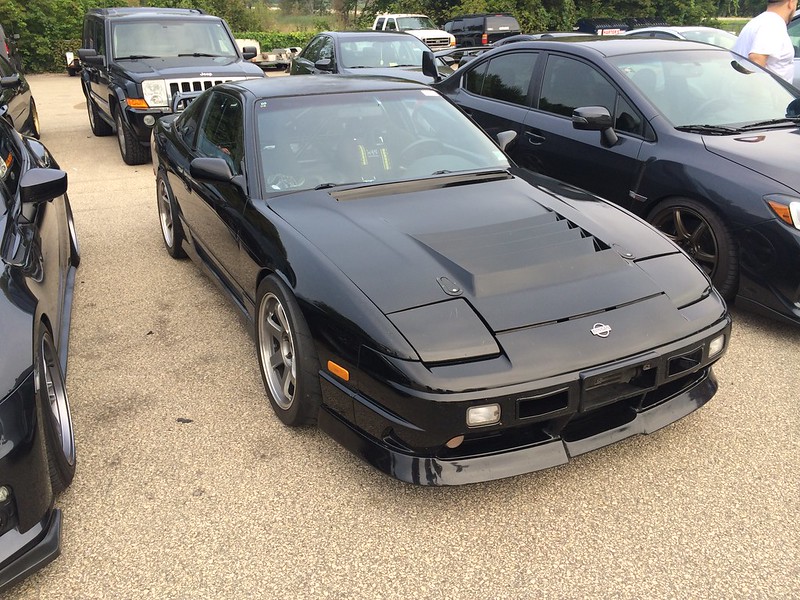 By the time we finished monkeying around it was dark out. We all cruised back to the hotel for a much deserved shower before heading out to dinner. I ate at a Chinese place in town with Teddy and a bunch of other cool guys the previous year, so we decided to head there again. When we arrived we were the only people there with about one hour to go until they closed. We told them we could leave if they were trying to close up shop, but they told us it was fine aside from the fact that they were out of rice (Arby’s is out of roast beef and the Chinese place in town is out of rice. Are we seeing a theme here in Shawano during Final Bout weekend?) 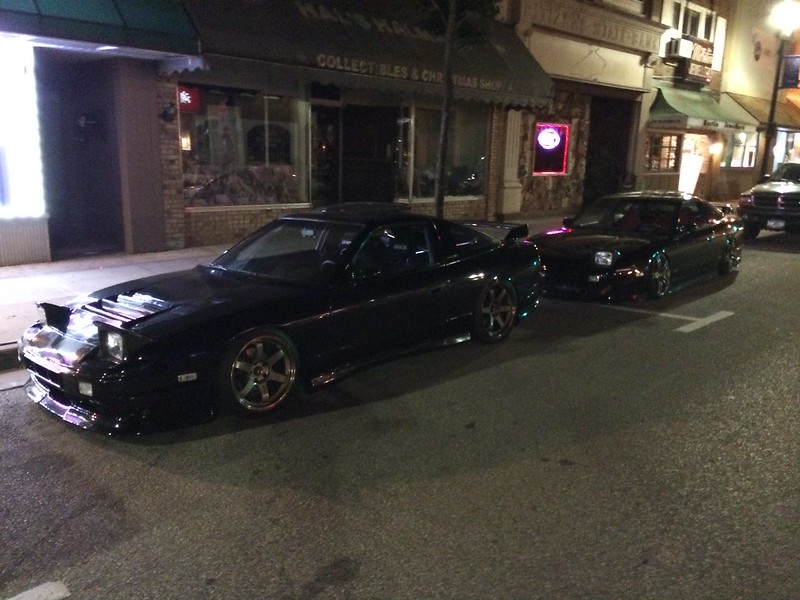 Despite the awkward atmosphere, the food was delicious. It may have just been the fact that I was on the edge of death after being in the sun and breathing in toxic fumes all day, but it sure did seem good. I think we were there with Jimmy, Andrew, Anthony, Tony, Martino, and Joe. If I forgot someone I really apologize! It’s been too long for my old man memory.

The man. The myth. The legend. 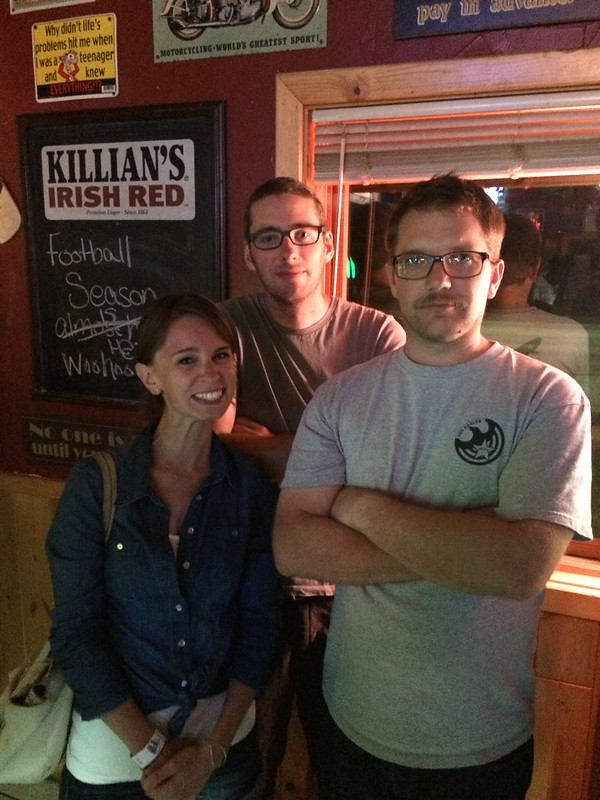 I can’t really remember what we did next, but I am pretty sure we headed over to the Longhorn bar after dinner to meet up with everyone. There was a huge group at this small local bar last year on Friday night of the event, but this year the party was on Saturday. As a result I was thoroughly exhausted and a noisy bar wasn’t where I was dying to be. Jimmy bought me a pop since I don’t drink alcohol so that I had a cool glass bottle to hold onto like everyone else. We stayed and chatted with BH, Nadine, and Benson for a bit but both of us were exhausted. I think Alicia and I left at about 10:45 to go back to the hotel and pass out.

I think I will probably have one more post after this one to wrap up the rest of the trip- but maybe there will be two. Trying to remember everything we did and all of the cool people we met is taking me back! It’s going to be a long winter. Thanks for reading!