Posted on December 7, 2018 by camryonbronze

I’m going to keep this week’s post fairly short and sweet as I have been on a family vacation down in Florida for close to a week. It’s really nice to get a break from the winter weather at home back in Michigan each year and take a quick visit to stay at my in-law’s condo. The kids always have an awesome time at the pool and we enjoy a quick burst of sunshine before returning to the frozen tundra of the North.

I was fortunate enough on this trip to take a little bit of time for myself and drive three hours North to visit some friends that I have met through the S13 community- Brett, Hayden, Brent, and Dan. All of these guys reside close to each other in the Orlando area and frequently hang out and work on their cars together- something I think has a lot of value since I’ve only got a handful of friends with a similar taste in cars that live within four or five hours of me. 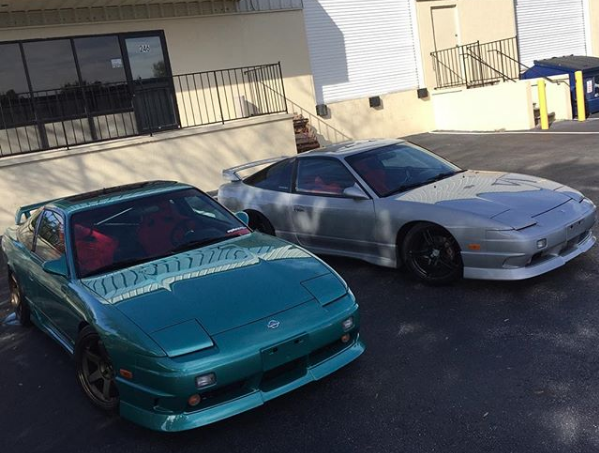 Brett’s cars are very elusive and rarely come out of hiding,
so I had to steal this photo from his Instagram.

I first met Brett (@noisy4ag) through Zilvia back in 2010 or so when he was building his teal 240SX. This car is the most immaculate example of an S13 fastback that I have ever seen in the US. Brett was way ahead of the game on the OEM restoration front, and as a result both of his S13s are super clean with lots of freshly replaced and long discontinued OEM components inside and out. Yes, Brett actually owns TWO fully restored and immaculate S13s, the teal version featuring a tidy KA-T setup. The car was featured in Super Street a few years back. 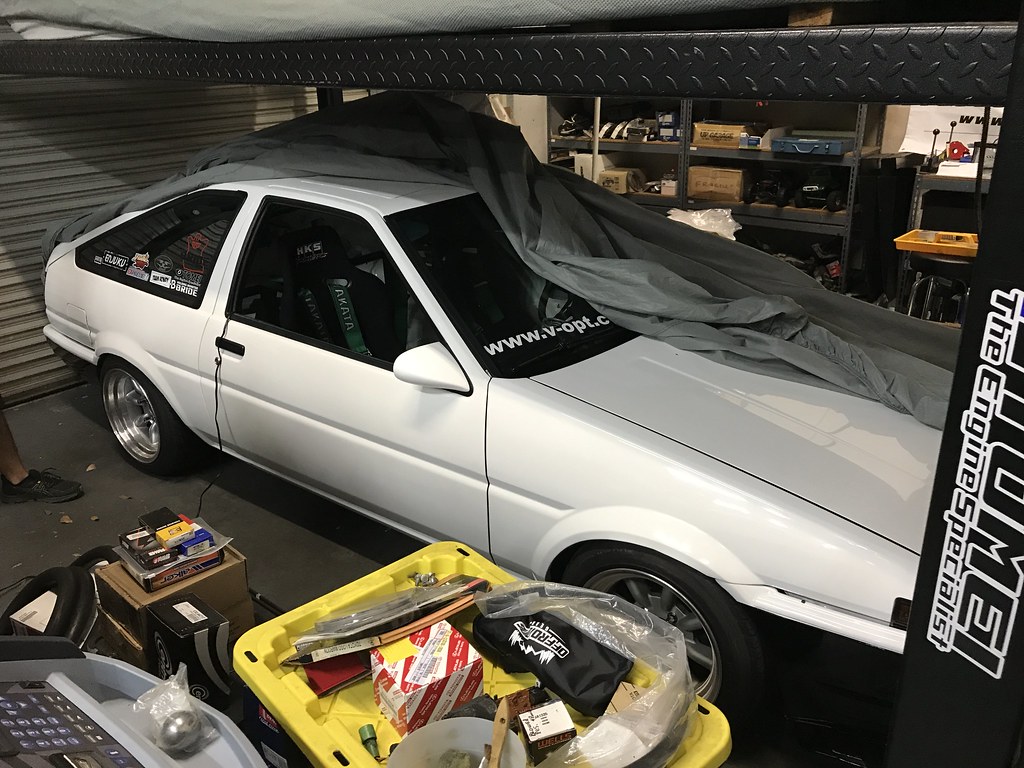 In addition to his two S13s, Brett also has a really nice supercharged AE86. The fascination with Toyotas has expanded over the last year or two to include a few off road vehicles like this neat ‘Yota pickup truck. I admit that I don’t know too much about this stuff, but it was definitely cool to check out none the less. Brett even dabbles into the rotary world- we took his grandfather’s ultra clean FC RX-7 out for a spin when we went to dinner. 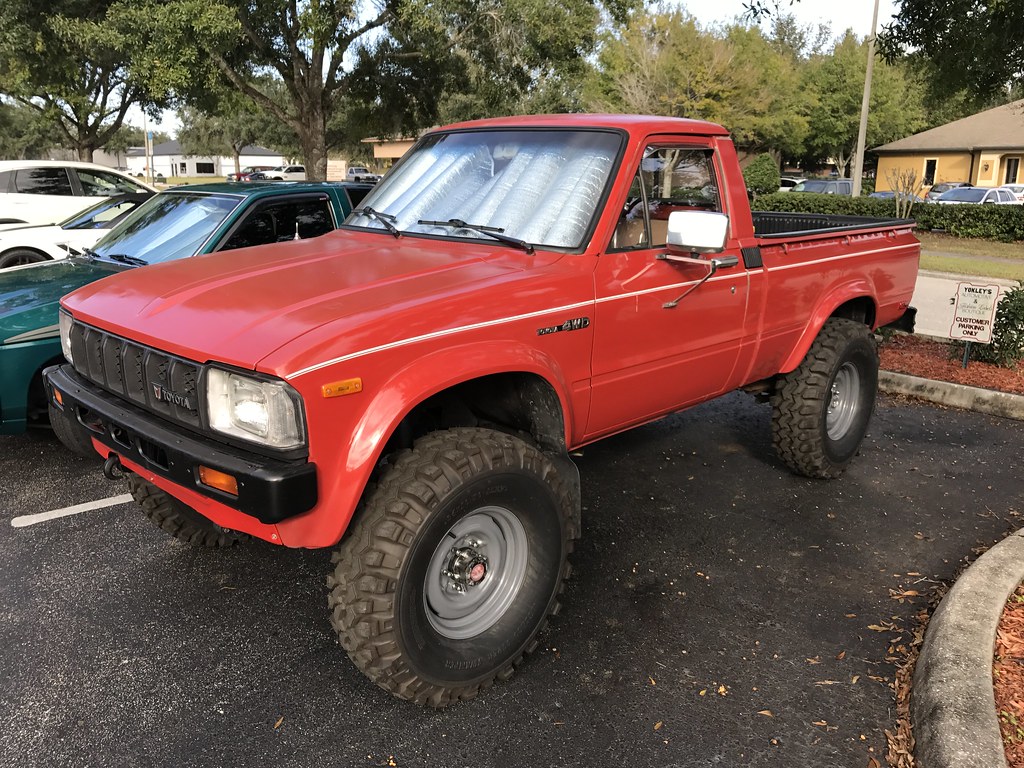 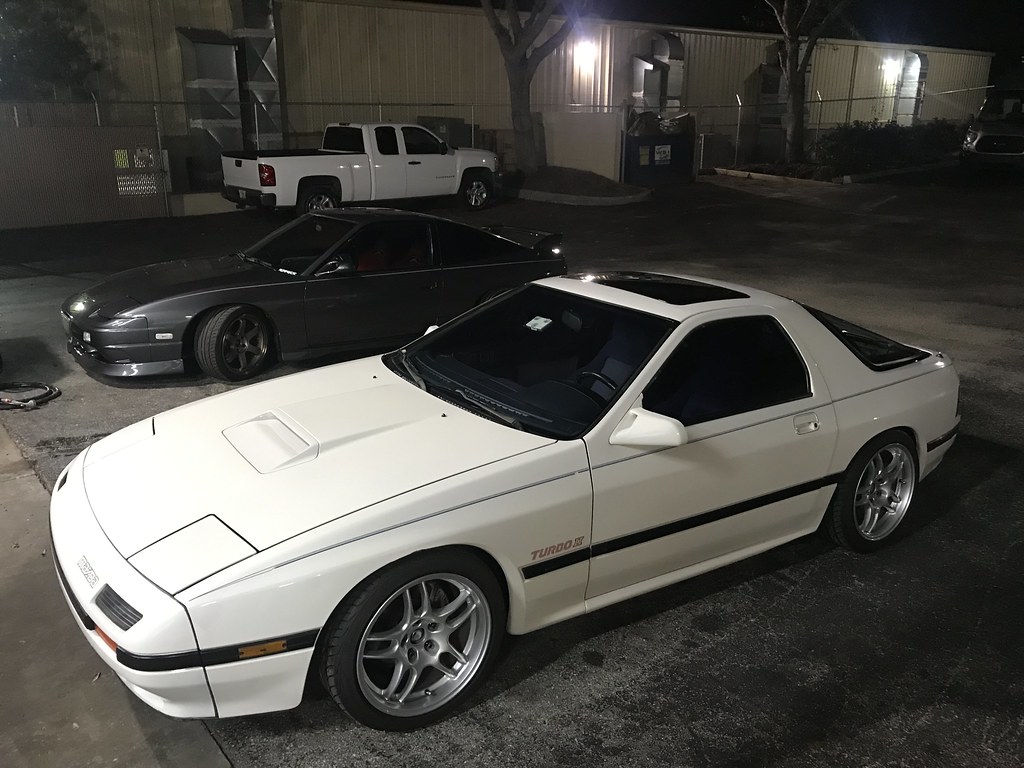 If you’re into S13s, you have probably seen Hayden’s car around on Instagram (@hb_s13). He’s got an incredibly clean example that he sourced bone stock with around 36k miles on the clock a few years back. Riding in Hayden’s car during my visit last time I came down here is partially what inspired me to add some more creature comforts to my car like functioning heat and sound deadening. It’s totally bazar to ride in one of these cars with working heat, A/C, and an automatic transmission. The exhaust is still stock as well and there are almost no creaks or other odd noises while cruising down the road- super cool to experience. He recently added the bronze 17/18 TE37 setup in place of his Panasports which I think compliment the factory paint color nicely. Looking forward to seeing the manual swap in the car sometime soon! 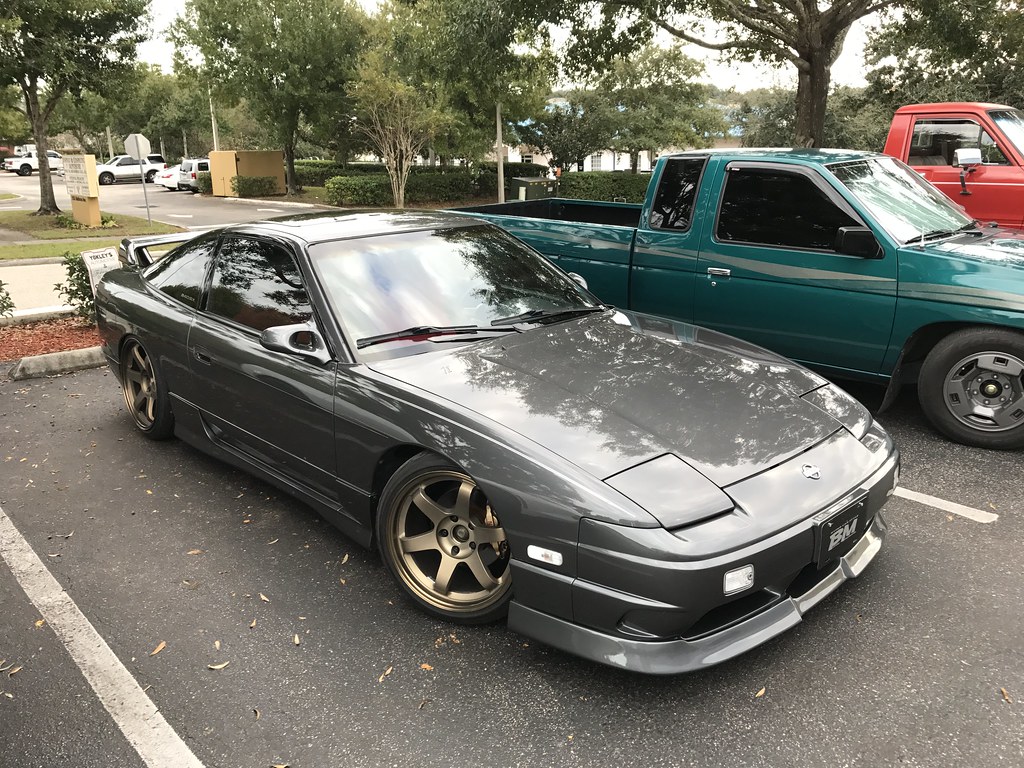 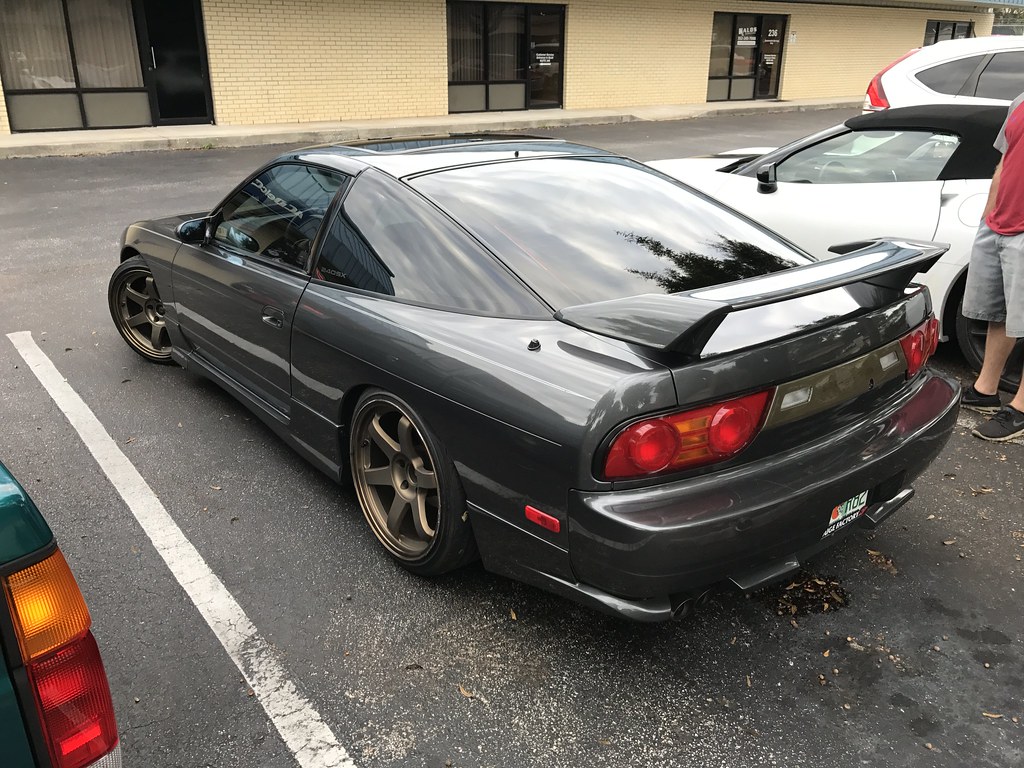 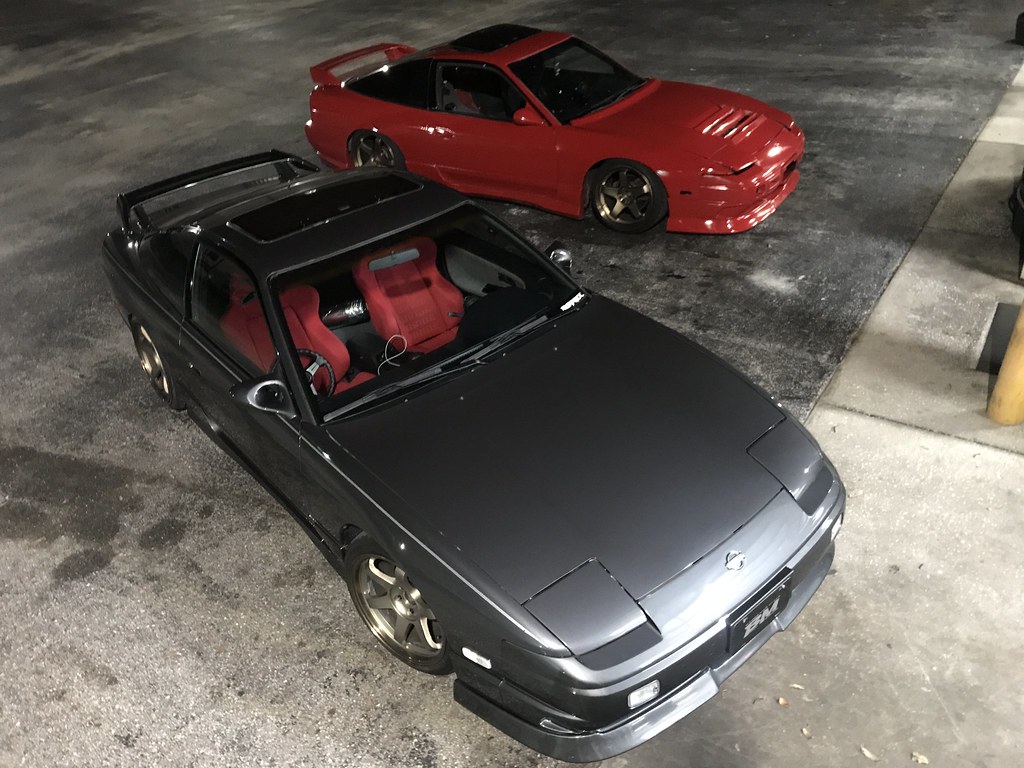 Hayden’s brother Brent (@brrrentbeakes) has built a host of really cool cars over the years including S13s and S14s. His latest project is this JZX90 that he just painted black last week. It was wild riding around in this car as well as it is still NA and automatic for the time being. Everyone always jokes about these cars essentially being oversized Camrys, and I would be lying if the seats didn’t feel similar to the Camrys I have owned over the years. This is another car I am really looking forward to seeing more of in the future as Brent always does a really nice job putting a car together. 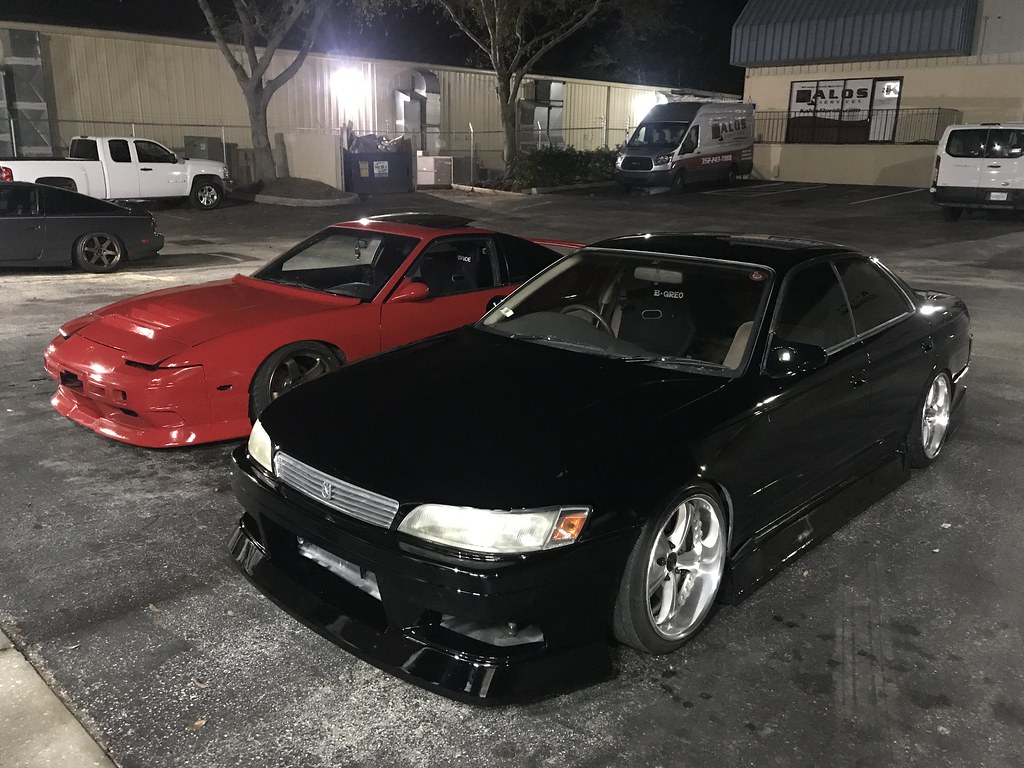 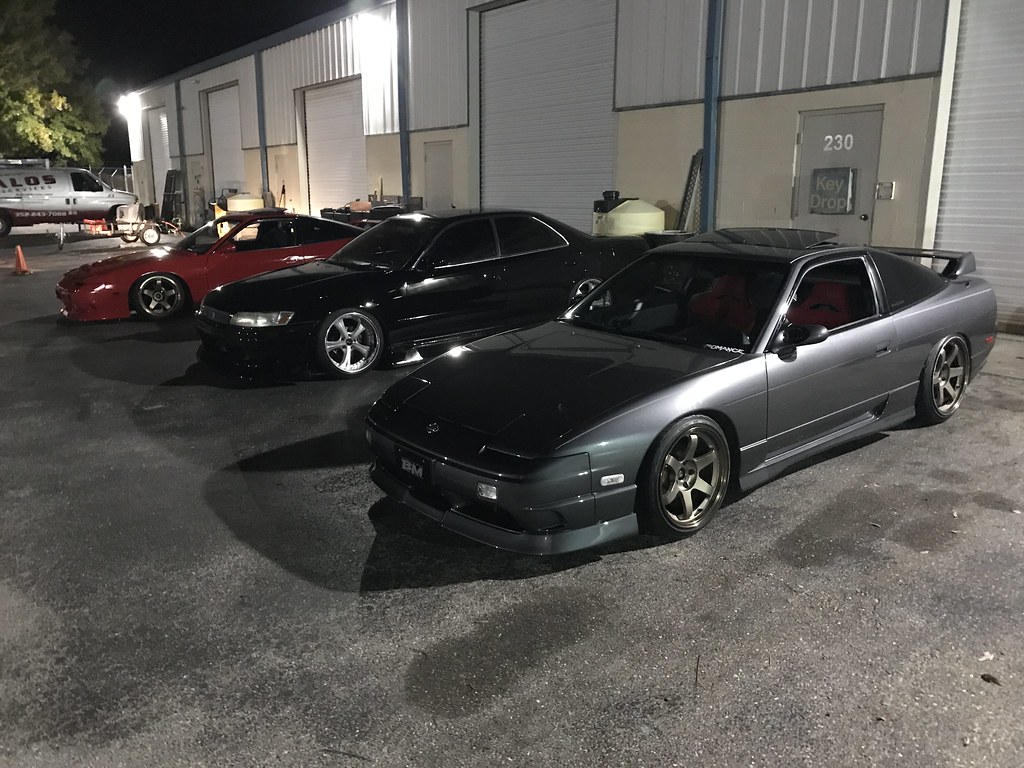 Perhaps the car from this dynamic duo that I was most excited to see on this trip was Dan’s S13. Dan (@__dzd__) has been working really hard to piece together all of the components for a refresh of this machine for the last year and I’ve been on board with his plan for quite some time now. Brent and Dan just painted both of their cars last week, so they were still awaiting the finishing touches, but it was still really cool to see. 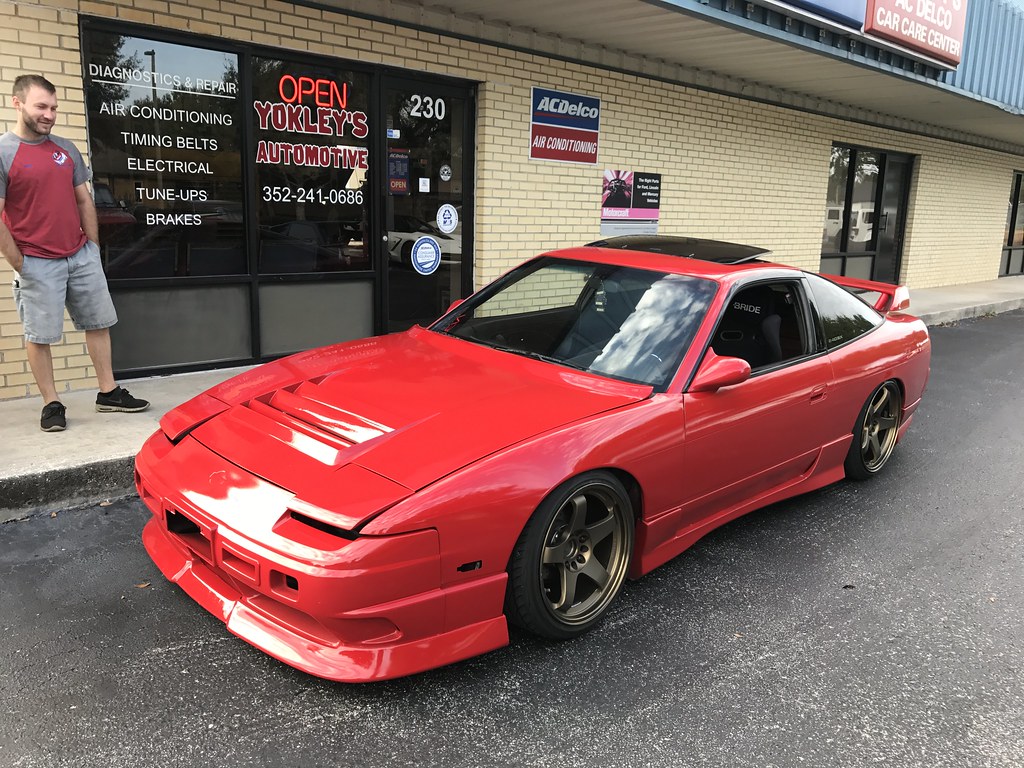 Dan’s previous iteration of the car included a set of bronze AVS Model Vs and Sexy Style aero. This time around the exterior features an OEM kouki 180SX front bumper with plate cutout and genuine R33 GTR N1 ducts, as well as a Hot Road aero kit consisting of a front lip, side skirts, and rear valence. A Koguchi Power hood really adds to the aggressive feel of the car and compliments the plate cutout and N1 ducts perfectly. I know Dan had his heart set on a pair of Ganador mirrors for the car, but I don’t think the East Bear mirrors could look any better. The whole car has a bit of a Break Itoh vibe to it, which is just fine with me as it’s my favorite 180SX of all time. 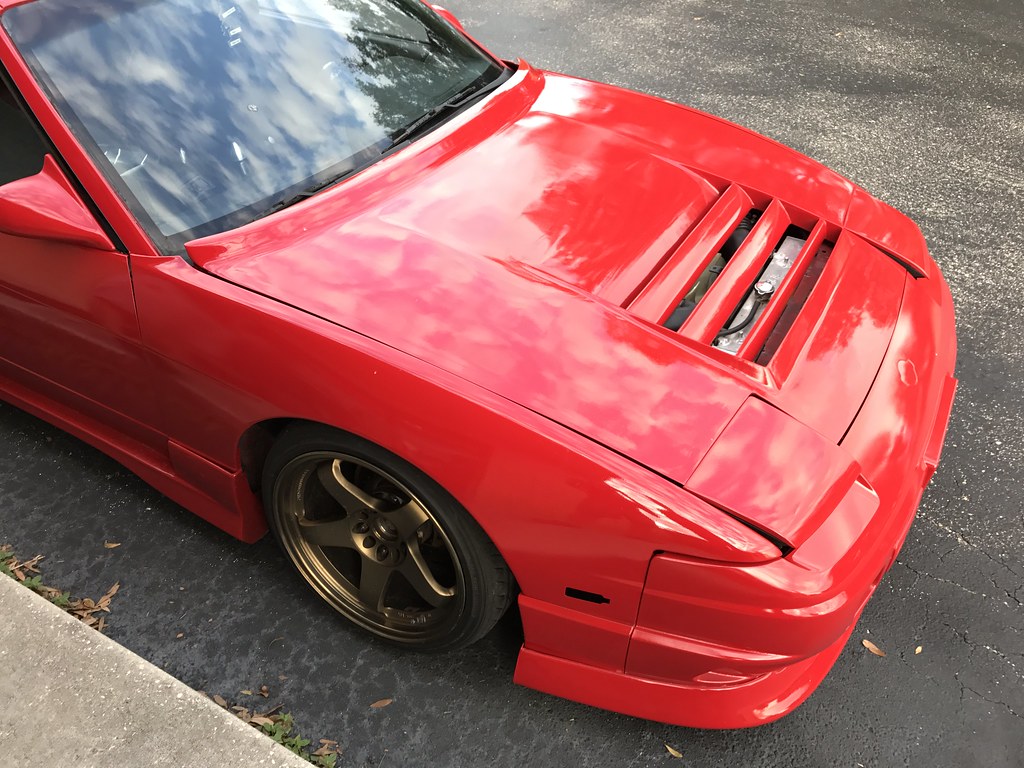 The final piece that really takes this version of the car over the top is the set of 17/18 staggered NISMO LMG4 bronze wheels. I still can’t believe Dan managed to get a hold of these in the condition he did, especially with both pairs matching in color perfectly. I know Dan is still tweaking the wheel fitment a bit, but the overall presence of the car is just awesome. 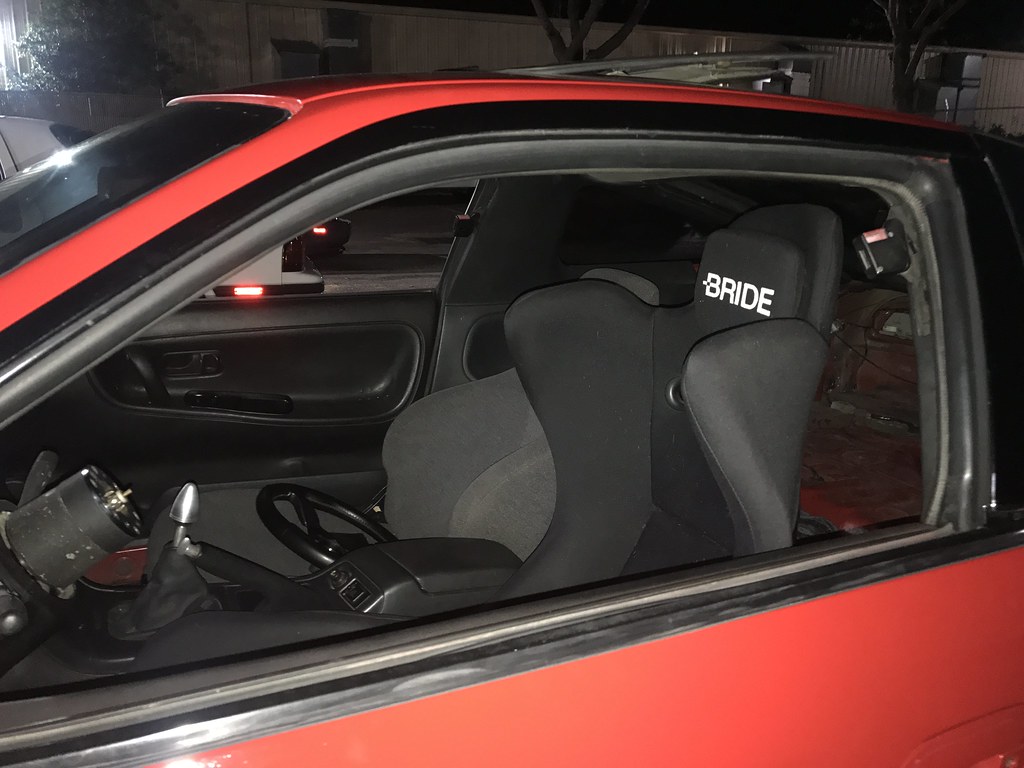 A Bride Maxis and Pivot shift knob reside in the interior. The interior of the car will be Dan’s next area of focus as I know there are a lot of details he wants to add to refine it including a clean dashboard and some brand new carpet. I think he would also like to add a NeXt Miracle Cross Bar if the opportunity presents itself, so here’s to hoping it all pans out at some point! 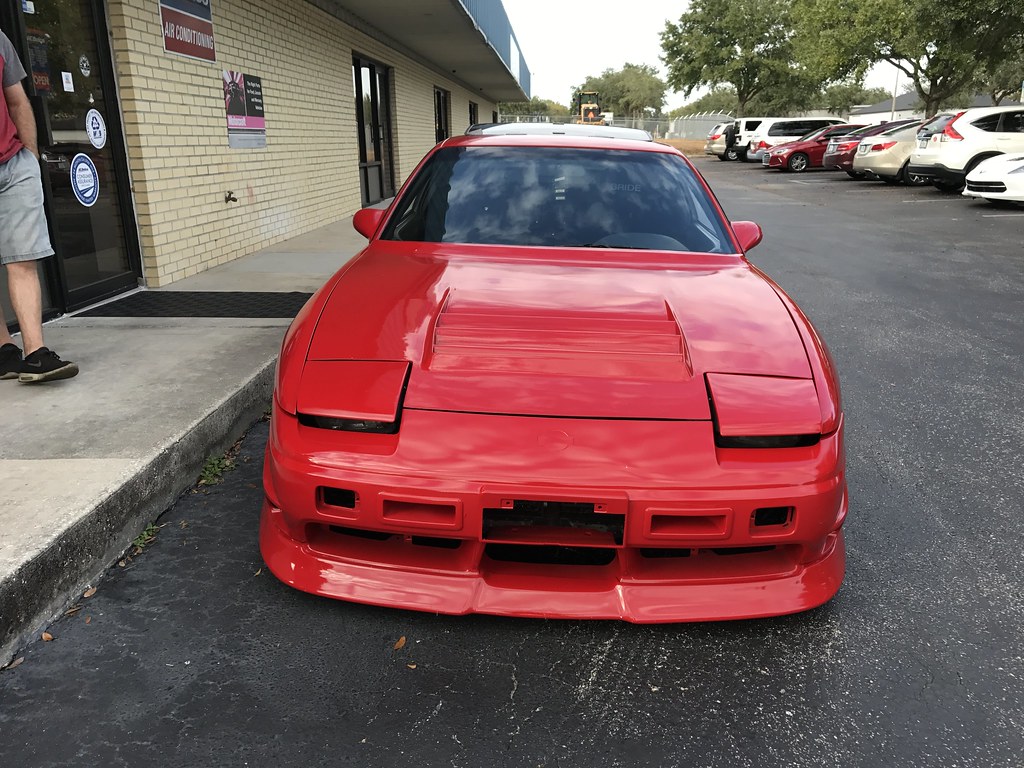 I really enjoy Dan’s car because it reminds me of simpler times in the S chassis community. For many of us, the build process ended quite a while ago and the thrill of the chase has long since departed. It has been a lot of fun for me to chat with Dan and watch him go through the process of adding all of these different components to attempt to build the S13 he has envisioned in his head. It’s awesome to see his dedication and I was honored to be able to check out his most recent progress in person with my own eyes instead of just through the internet. 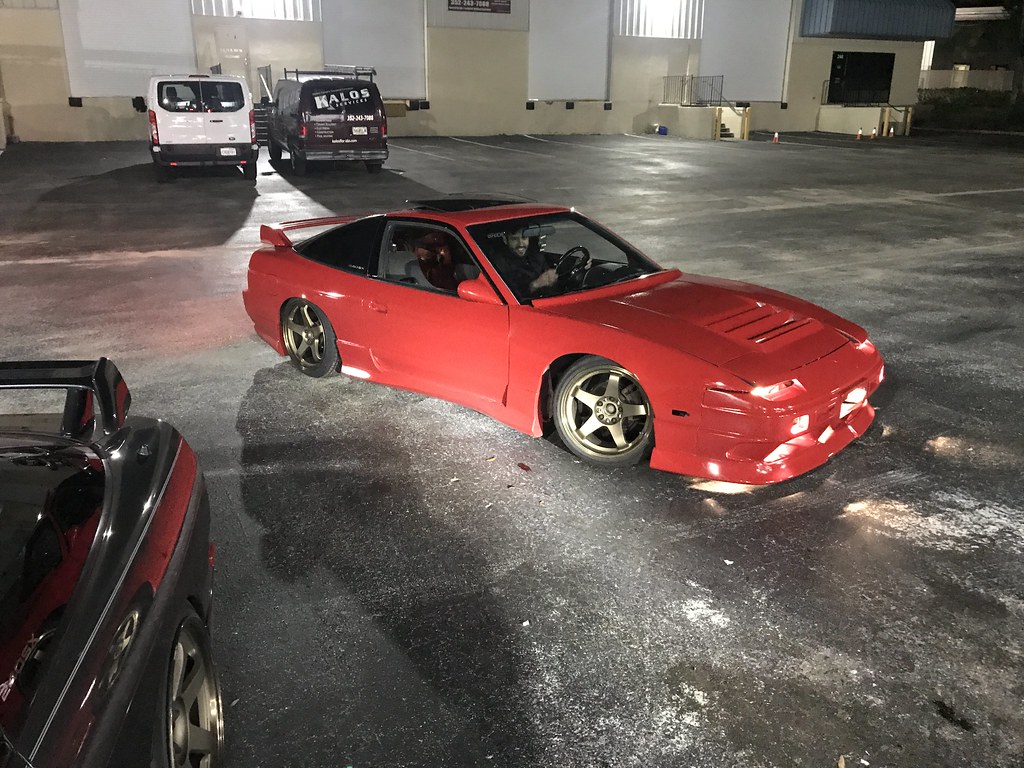 Experiences like these are what this community is all about. The fact that we can all stay connected through the internet and social media to share a common passion about these cars and help each other out is really amazing. The world feels smaller than ever these days and I often feel like I have friends all over the world- even if I have never met them in person. When I do get a chance to hang out in person, it’s always a good time. 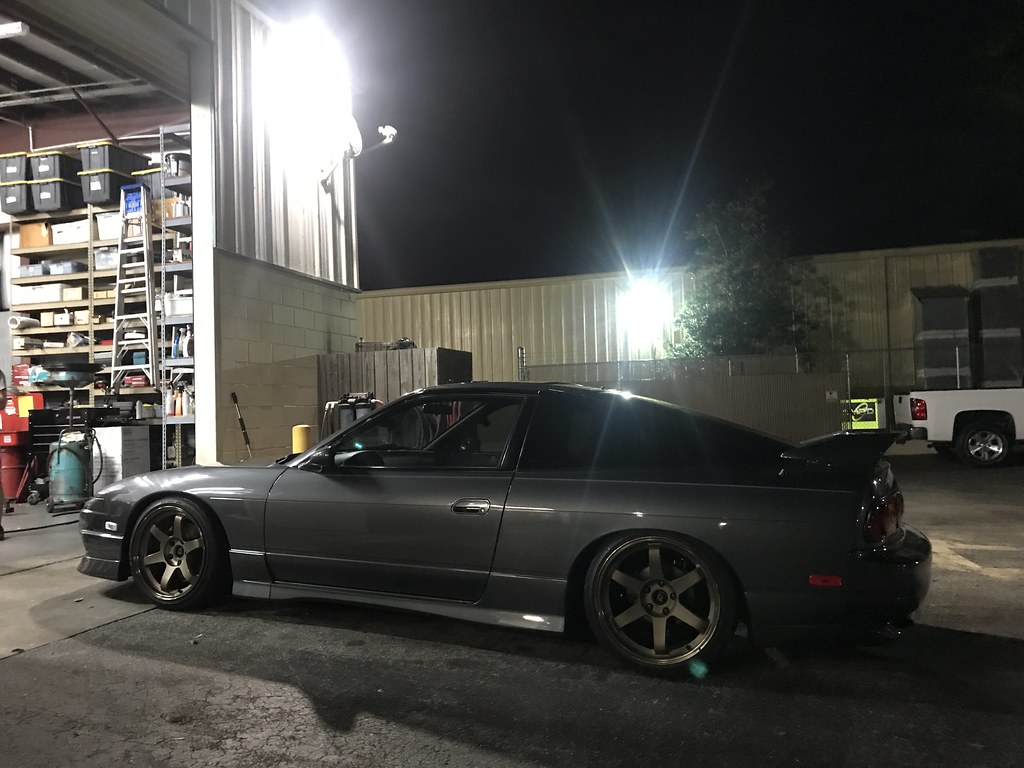 I’ll be returning to cold and snowy Michigan tomorrow night- after which it will be time to get the red coupe torn apart and parted out so that I can get my garage back! I hope to check in next Friday with some decent progress on that front. As always- thanks for stopping by!