Last Saturday morning I drove an hour and a half away to my friend Tim’s house to hang out with him and another S13 owner/friend of ours named Greg. I have known these guys for a really long time and we have all been tinkering with these cars for about a decade now, so we always have a good time when we get together. 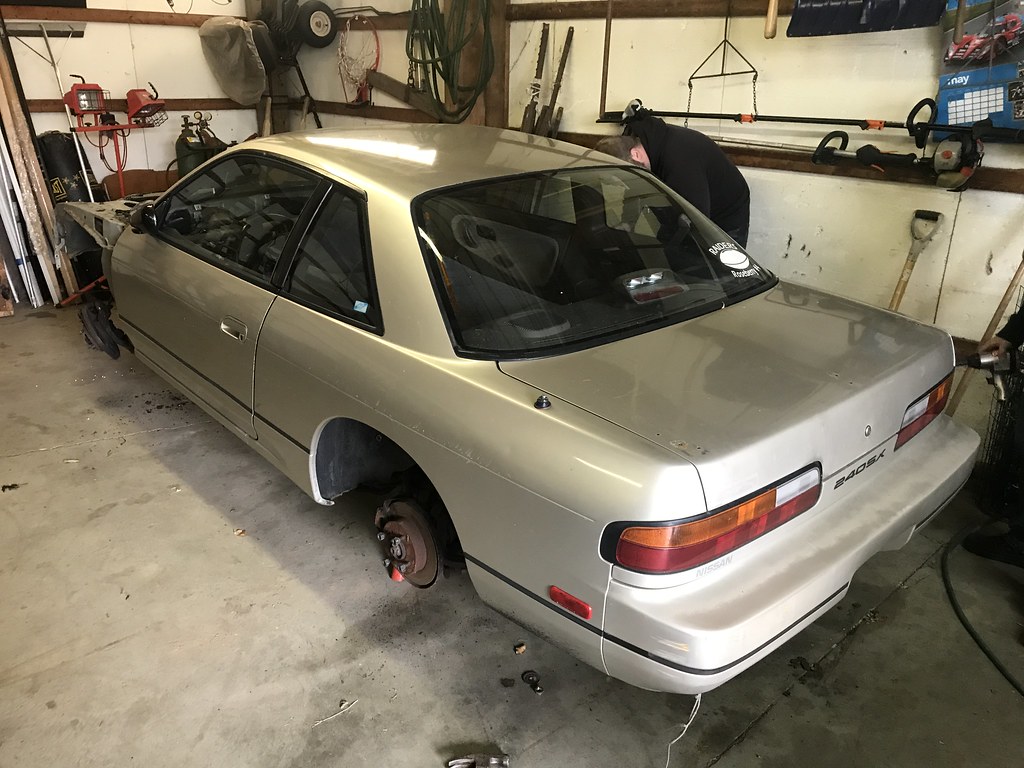 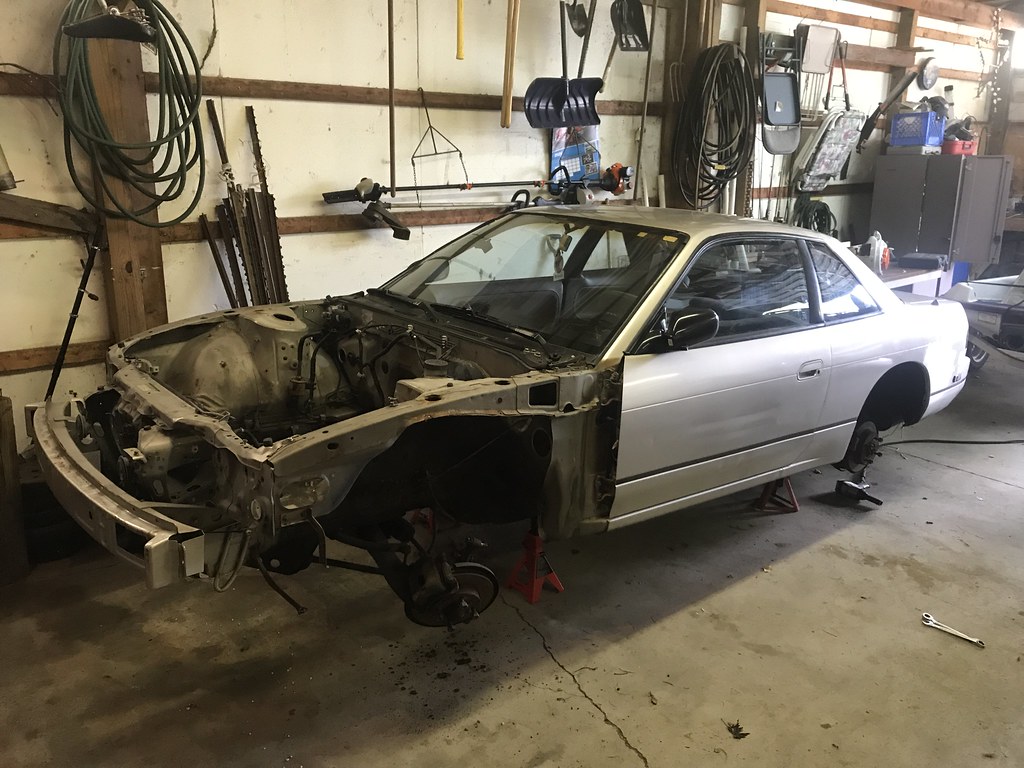 The first order of business was to travel out to Tim’s parents’ house where my PS13 chassis is currently being stored to remove the stock wheels and suspension. I needed to grab these items to install them on the red donor coupe I recently parted out so that I could sell the complete chassis as a rolling unit. It would have been a lot easier to leave these items in place for when I eventually transport it to my home, but selling a shell is a lot easier if it can be rolled. I unloaded a number of black interior items I have acquired into the coupe for storage purposes while Tim and Greg made quick work of the suspension removal. We determined that these items had probably never been removed before- which is crazy since this chassis has over 300k miles on it. All of the clips in the trunk were still intact and the rubber covers were in place over the rear strut tops. Really cool to have a chassis like this that was never modified! 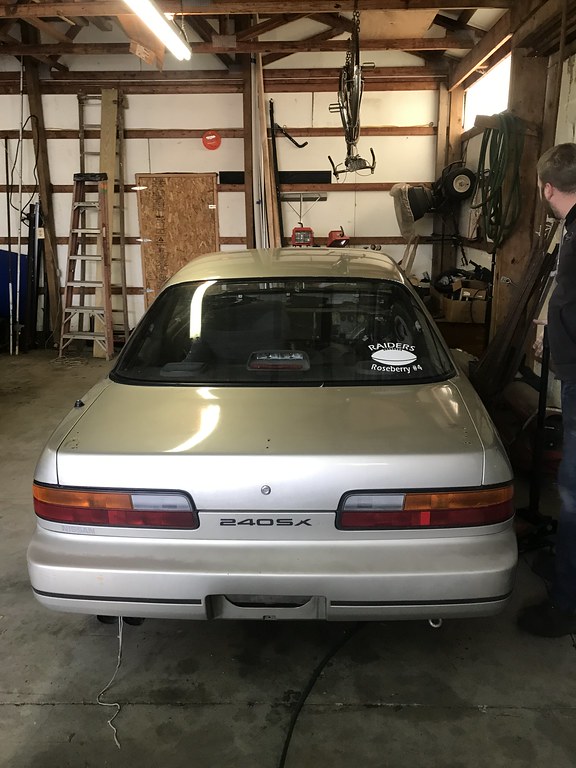 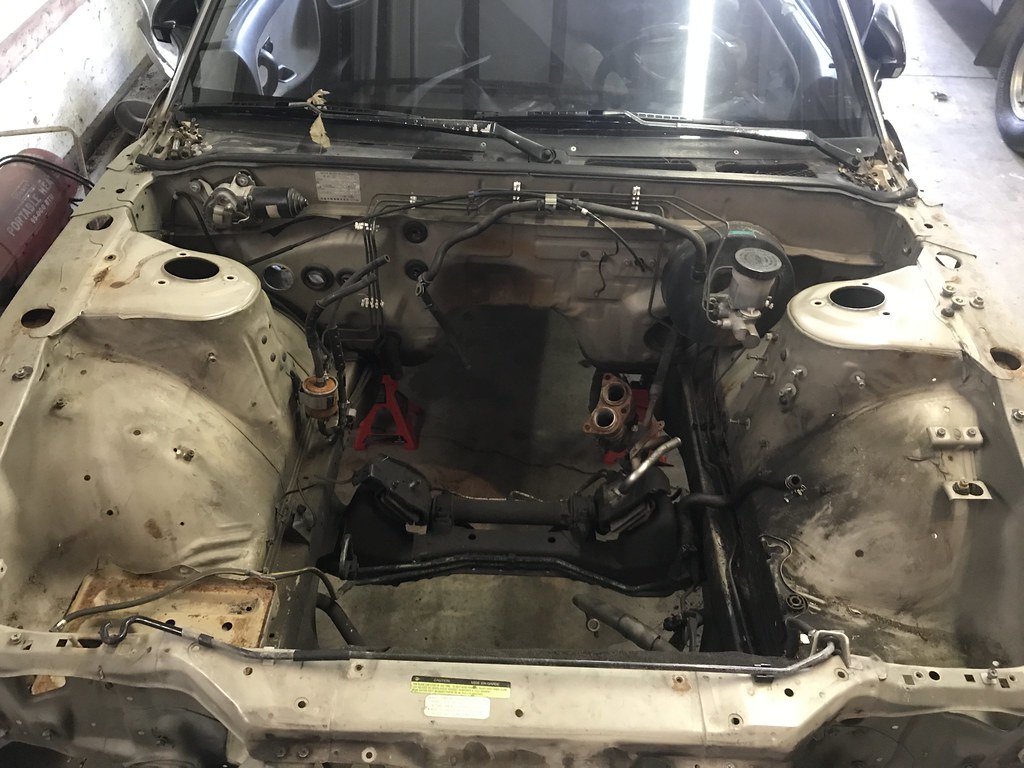 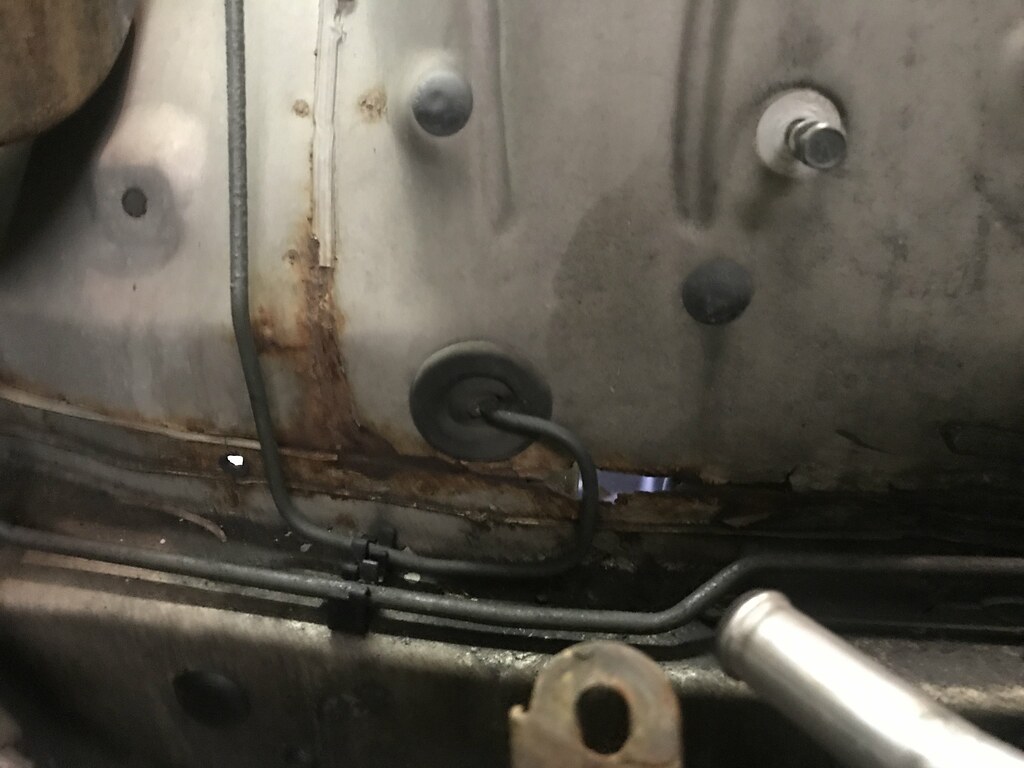 I grabbed some photos of the only rust on the chassis while I was there to run them past my friend Mike at Detroit Drifting Company. Mike did all of the welding on my black S13’s engine bay when I shaved it back in 2012 and also made a very similar repair to that chassis, so I am hoping to have him do the same thing to the coupe this spring before I transport it home. We’ll see what happens! It’s unfortunate that there is any rust on this chassis at all, but the fact that the rest of the car is rust free and stock makes fixing it seem more than worth it. The rear quarters haven’t even been rolled! 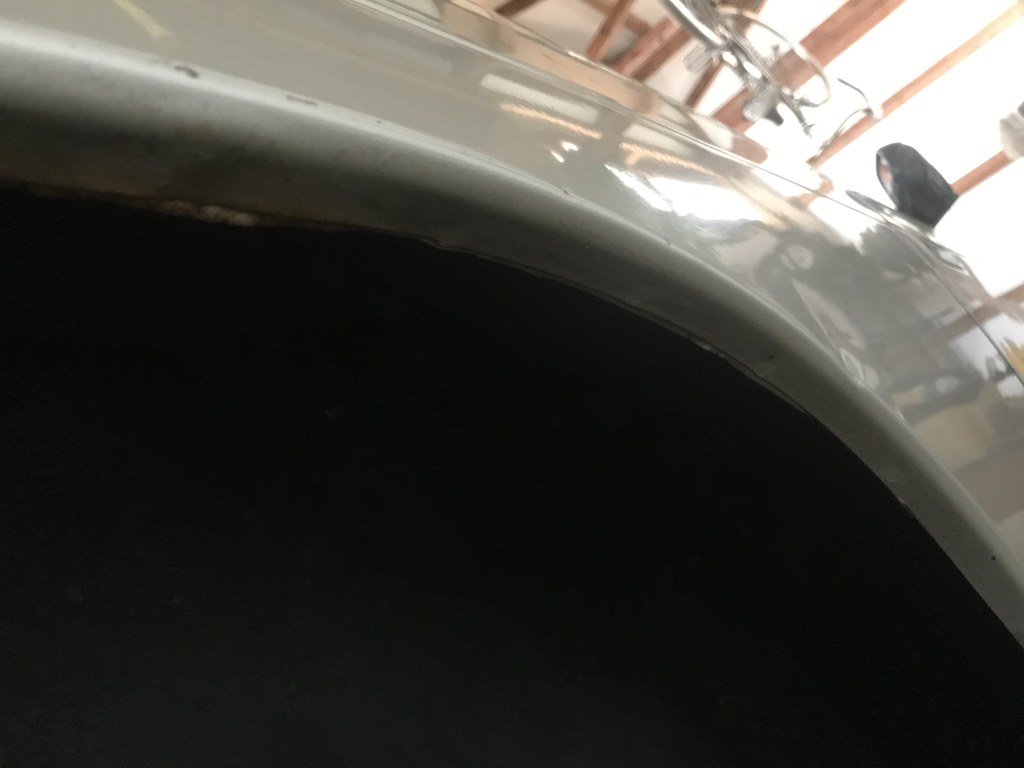 After retrieving the suspension and wheels, we grabbed some Taco Bell before tearing into Tim’s red S13 hatch. We managed to mate the engine and transmission before dropping it into the car- only to find that there was resistance when trying to turn the engine to install the CAS. After pulling everything back out, we found that the slave cylinder bolts were contacting the clutch when trying to rotate the engine. Since the slave was not installed, the bolts were threaded too far into the transmission. A stupid error, but at least it wasn’t something more serious! 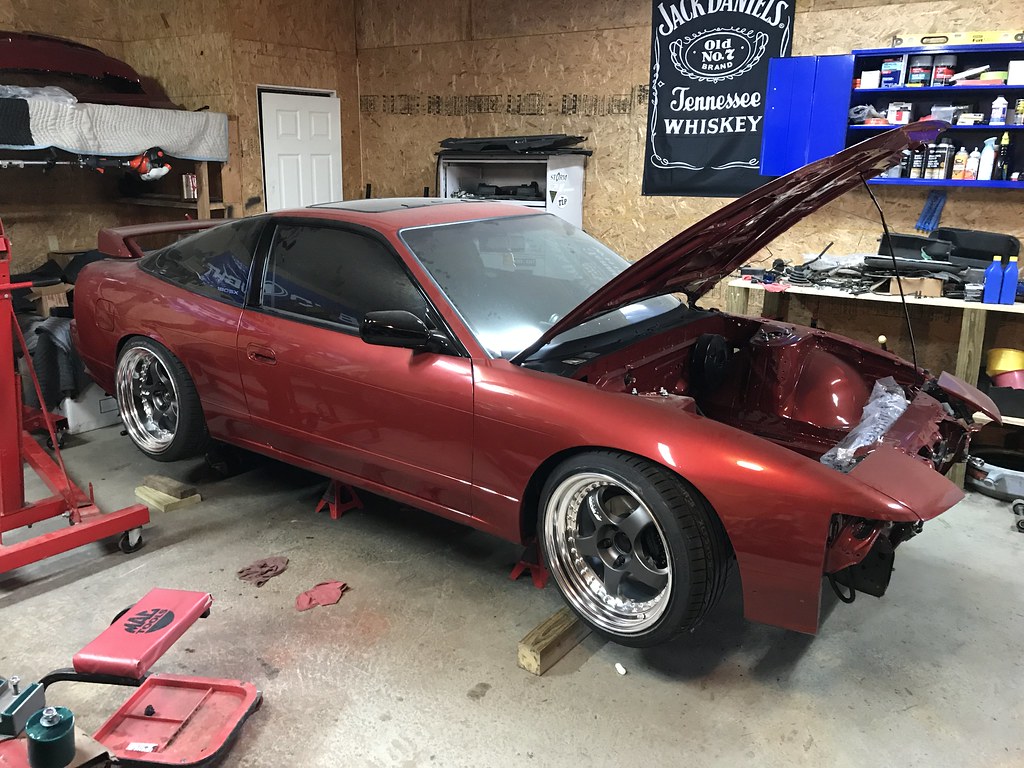 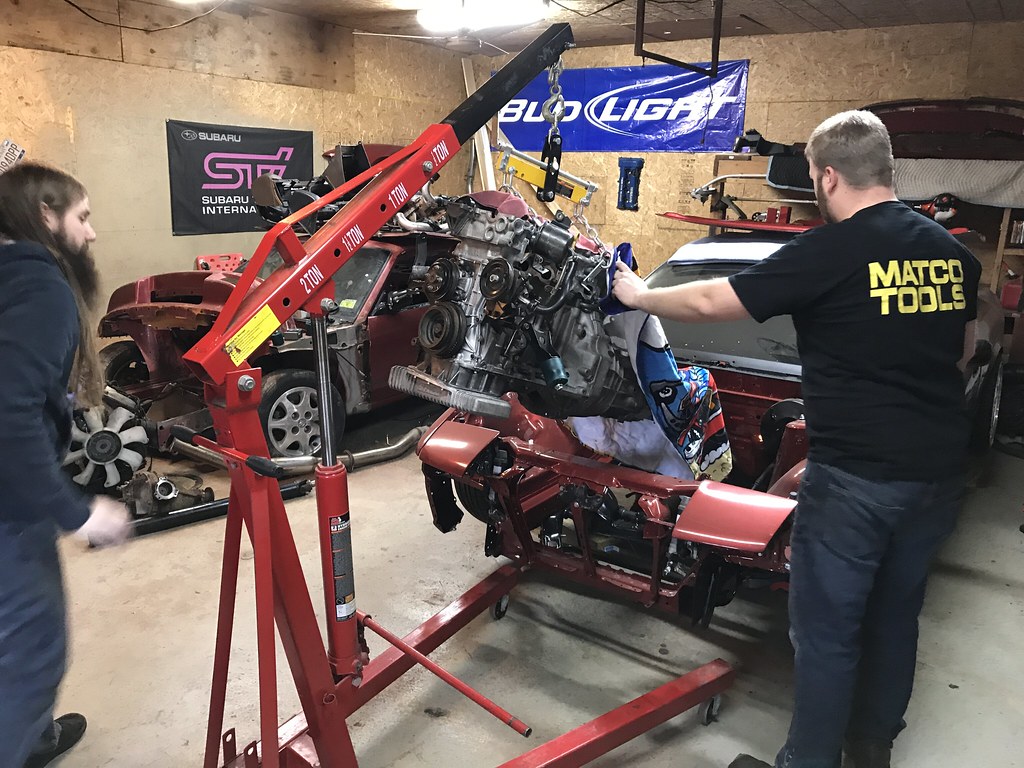 It was good to make some progress on Tim’s car. Hopefully it will be running and on the road sometime this season. It would be nice to cruise around in the cars together. Fingers crossed this is the year! 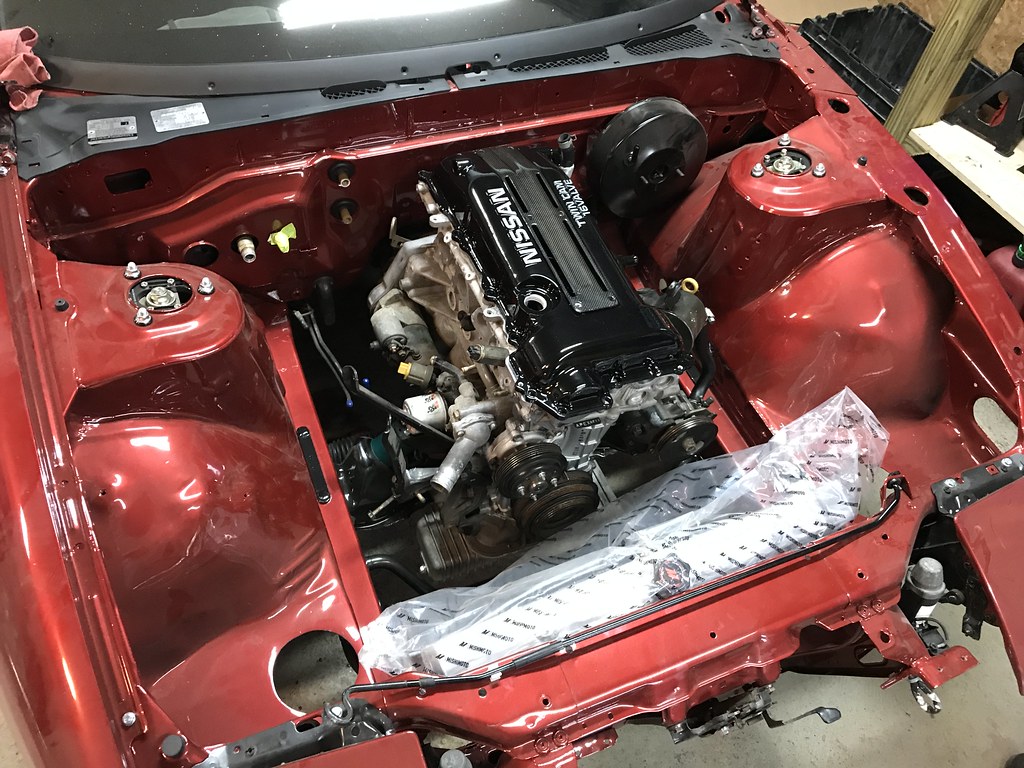 Back home again, I was able to install the suspension and wheels on the red donor coupe before posting the rolling chassis for sale. Hopefully I will be able to unload it soon so that I can free up some space in the garage. Unfortunately this car did not turn out to be “rust free” as the previous owner described it to be, but I am sure I can still find a good home for it. I had a feeling that was not the case when I bought it, but knew it had the components I needed for my own build. 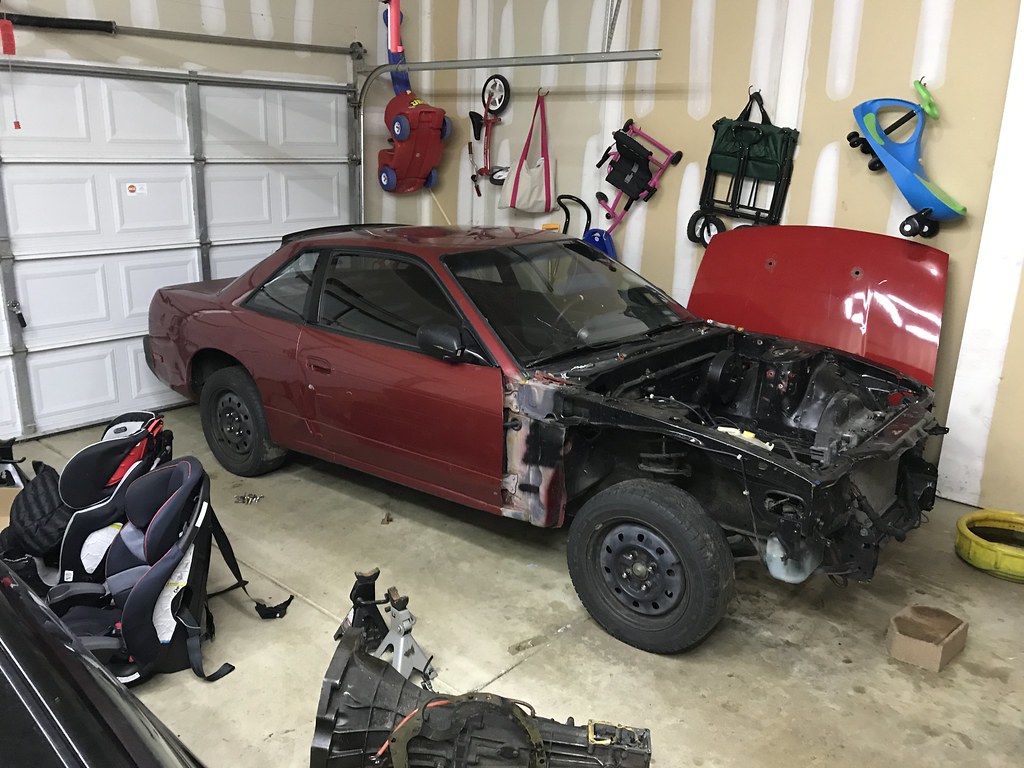 I picked up a couple of items I needed for the PS13’s SR20 refresh this past week including a stock shifter assembly (thank you to @Reneh240 for sending me this!) and a stock exhaust manifold from Tim. I’m planning to shoot the exhaust manifold with a quick coat of paint before installing it, along with a new factory manifold heat shield sourced from Japan (just like I installed on the SR in my black car) when it arrives. 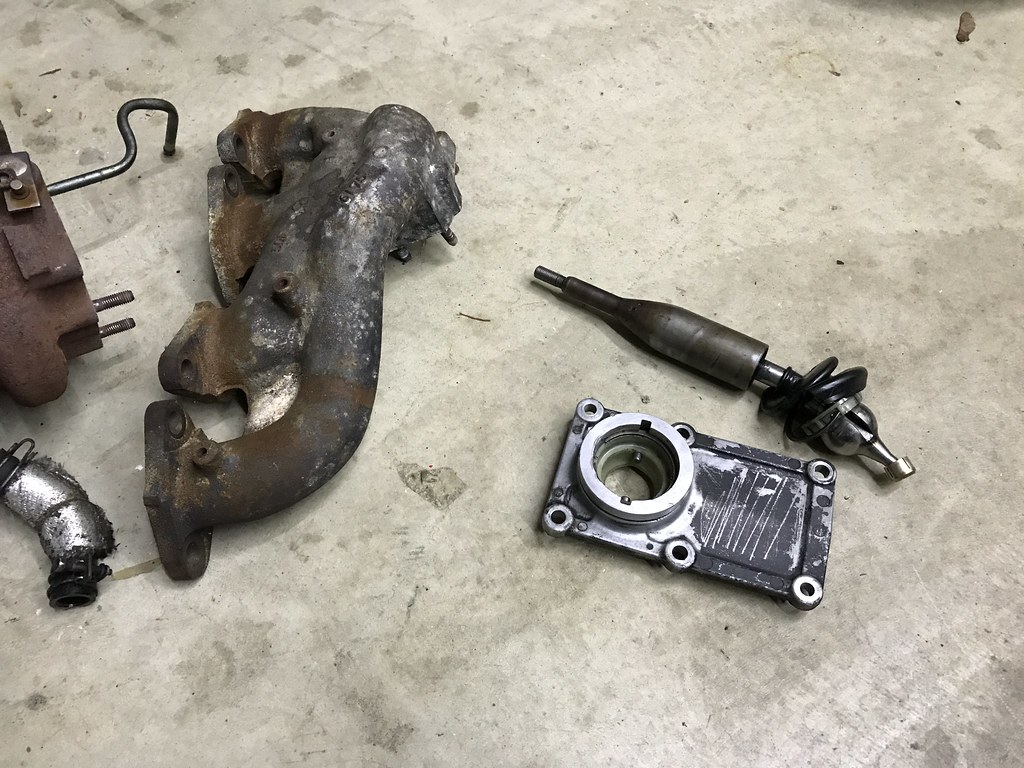 I’m still waiting on a few engine maintenance items from Japan, but I did receive another order of support items from the states including bolts for the oil pan, nuts and washers for the exhaust manifold, nuts and locking tabs for the turbo, shifter assembly and clutch slave boots, water pump studs and washers, and some other gaskets and seals for the transmission. I still need a few things to complete the refresh, but this is a great head start on beginning to put everything back together. 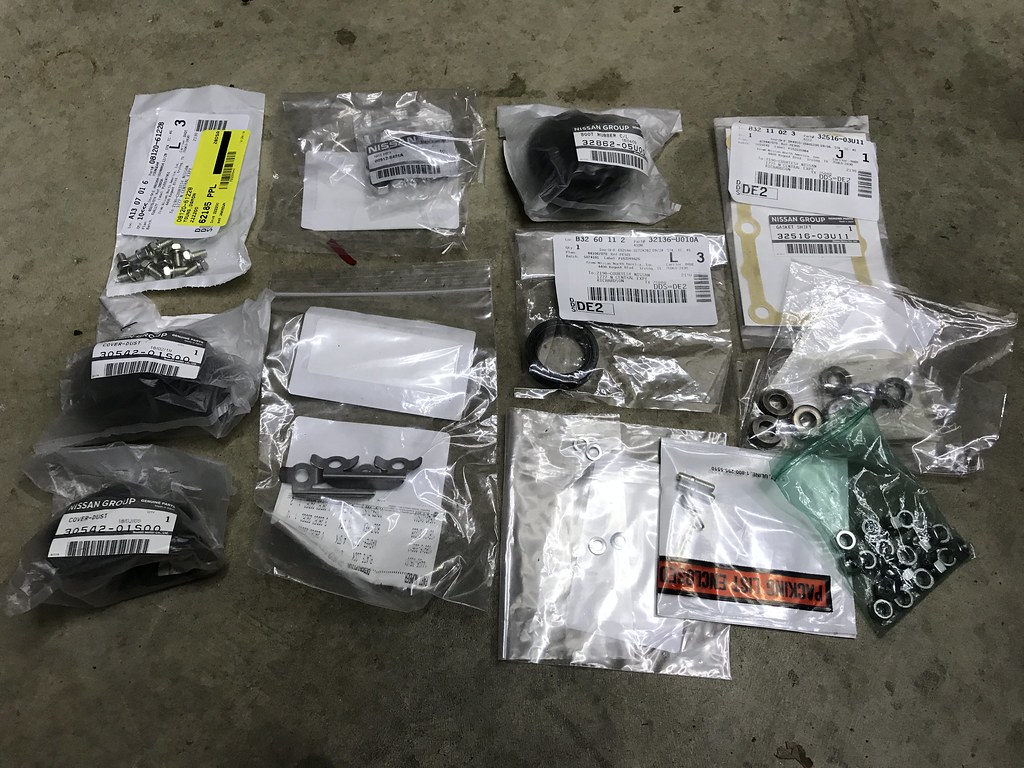 My wife is going on vacation with some friends next week, so I have been taking a break from too much garage work to spend time with her and ensure that I have enough to do in the evenings while she is gone. I usually get pretty bored without her around after the girls go to bed so I’ve been trying to save up my projects to keep busy. If all goes well I should begin engine reassembly next week. This is the portion of the year where it begins to feel like winter will never end, even if there isn’t much snow. I’m trying to keep the motivation flowing!

Thanks as always for stopping by! Have a great weekend.

4 Responses to Slow Progress > No Progress