Posted on February 1, 2019 by camryonbronze

The weather conditions in Michigan over the last week have not exactly been conducive to building cars (or even leaving the house at all really.) Last week we were hit with a decent ice storm that canceled school for my daughters for two days, only to be hit with a snow storm and bitterly cold temperatures this week that resulted in school being canceled four days straight. It was -6º this morning but without any wind, so I guess they determined it was safe for the kids to go to school again. What a crazy couple of weeks. Winter took a while to get rolling this year but we are definitely in the thick of it now.

With temps dipping as low as they have lately, I haven’t had too much willpower to make it out into the garage at night. I am definitely motivated to work on the cars, but it just isn’t worth it when it’s that cold outside. I did manage to get a few things done before the really cold temps hit though. 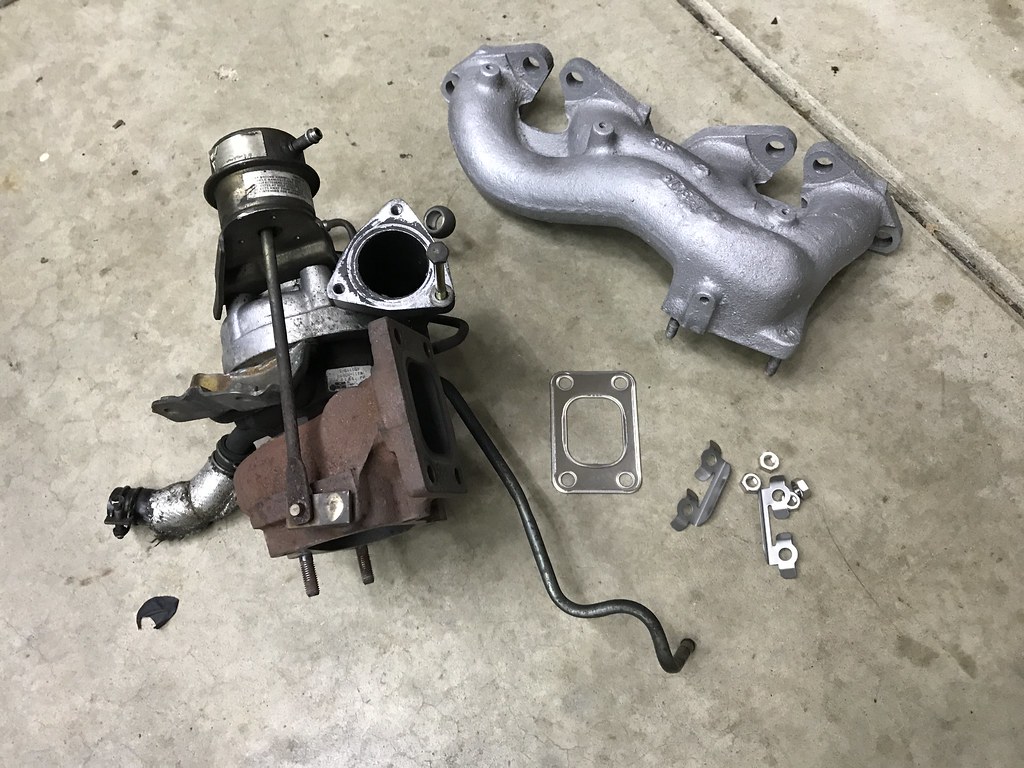 It’s so nice to assemble the turbo and exhaust manifold when the engine is out of the car.

I’ve slowly been working my way through a number of the OEM items I ordered and helping them find their way onto the engine. A couple weeks back I finished cleaning the engine up and started installing things on the hot side. I hit the exhaust manifold with a quick coat of paint that will likely discolor once it gets up to temp like it did on my other SR, but I am planning to cover it with a brand new heat shield from Nissan anyway. I mounted up the turbo with fresh gaskets, locking tabs, and hardware before bolting the manifold to the head with the proper OEM nuts and washers that were absent when I removed the Megan turbo manifold that came on the engine. It looked to have been assembled with a mix of random hardware so that needed to be corrected. 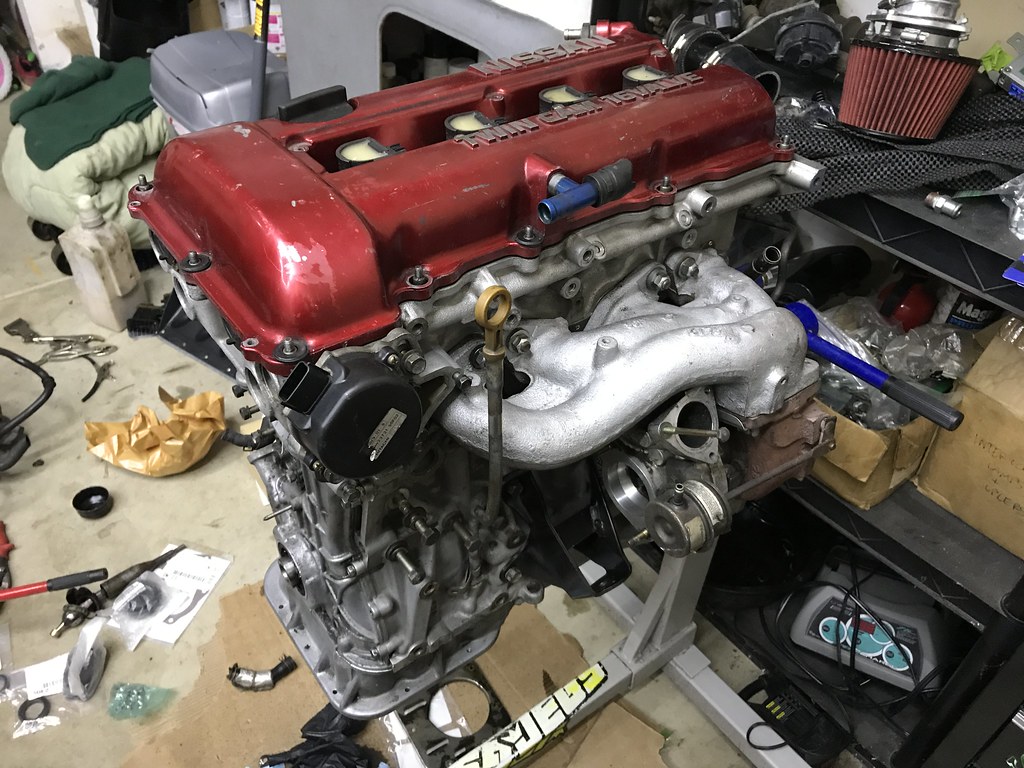 Still waiting on some OEM hardware to replace missing or random items that came on the engine when I got the car, but the hot side is more or less coming together.

With the turbo assembly largely in place aside from the hardware and other items I was still waiting on, I removed the crank pulley to clean up the front cover behind it where the front main seal had clearly been leaking. I finally picked up a seal puller and was able to make quick work of replacing the front main seal, cleaning the crank pulley, and reinstalling it. I would love to replace the entire oil pump and front cover assembly like I did on my first SR many years ago, but I am trying to keep this a simple refresh like I did on the SR currently in my hatch. It’s easy to get sucked into going crazy, but I am trying to keep a level head about it and find a good balance. 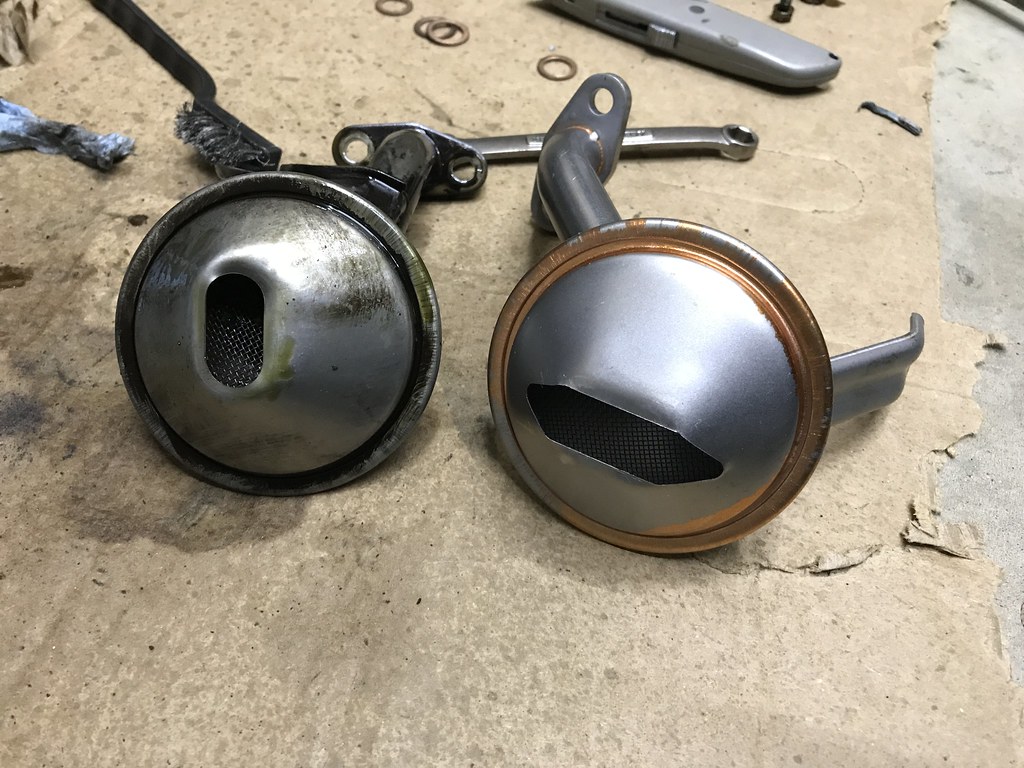 Nissan revised the oil pickup design on the later SR20DET engines- always a good idea to replace yours if you’re working on an S13 SR.

To my surprise, I found that a Tomei oil pan was installed on this SR when I removed it from the coupe. While it was a super nice piece, I decided to part ways with it in favor of a stock oil pan. I ran an oversized GReddy unit on my car for many years but recently decided it’s probably not needed for a casual street car. The issue of oil starvation always worried me, but I don’t really do any aggressive driving to deem a large pan necessary in my opinion. I installed a new S14 oil pickup and gasket on this engine along with an OEM oil pan and fresh hardware from Nissan. It’s a shame the RTV Nissan provides is orange and not gray or black, but I decided to just roll with it this time around. I’m not really looking to win any “Best Engine Bay” awards with the PS13 build- I just want it to look relatively tidy and stay reliable. 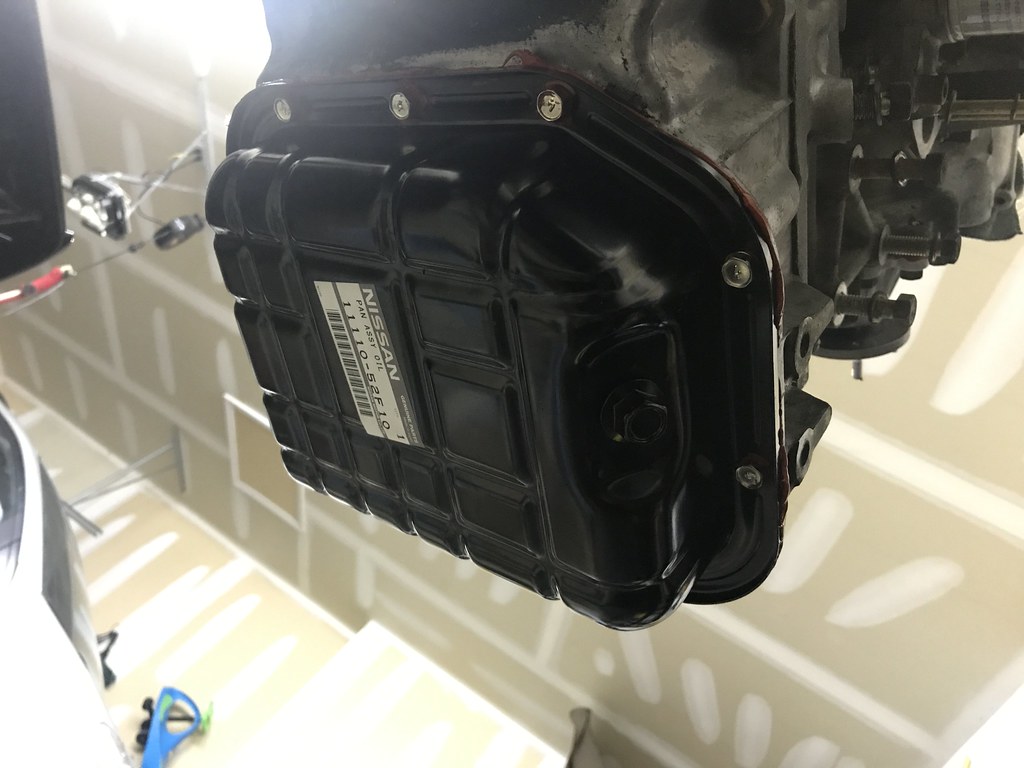 I next turned my attention to the water pump and installed a new OEM unit along with the proper studs, washers and nuts from Nissan. Oddly enough, I had to source the nuts from Japan as they were discontinued stateside. I’m sure I could have easily found something at the hardware store that would work, but I love to use the factory stuff whenever possible. Also note the freshly installed OEM  oil filter in the background. 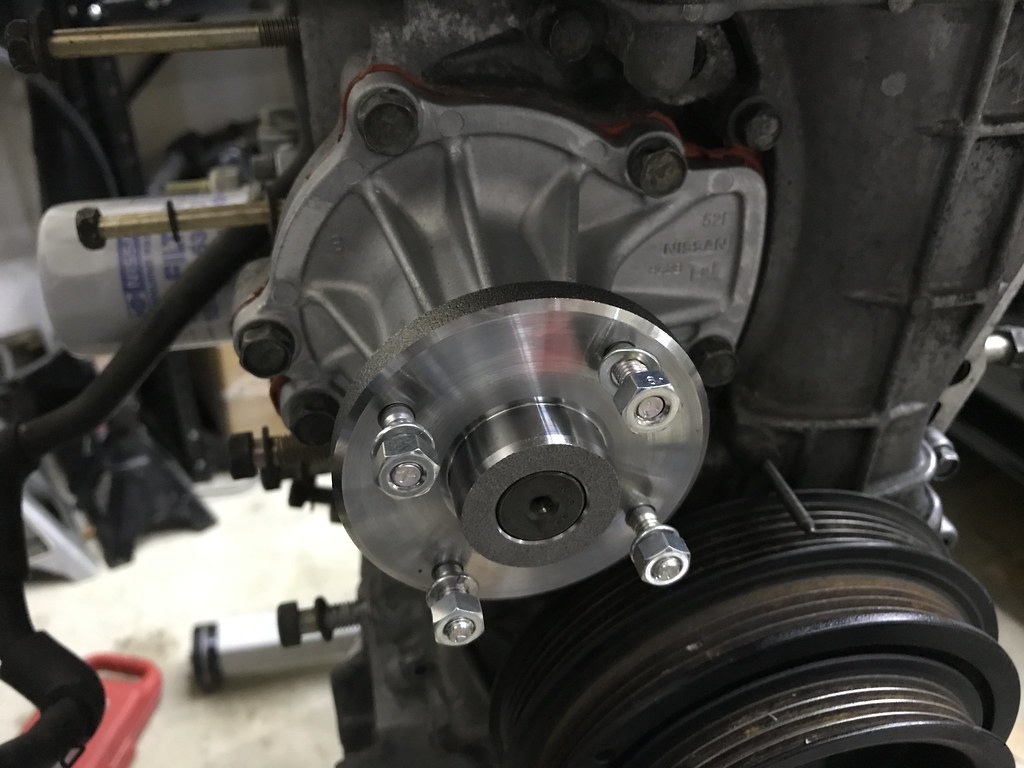 The engine overall could probably be cleaner, but I am content with it for now. Most of it will be hidden once installed anyway. I just wanted to get it clean enough to spot any potential leaks once it is up and running.

At this point, this is more or less how the engine sits. I’ve been waiting on some replacement hoses from Japan to arrive to get started on the intake side of things, but I should have just about everything I need (knock on wood) by next week. It’s supposed to warm up here quite a bit over the next three days so I am looking forward to being productive in the garage and making some more progress. I sent my valve cover out for powder coating, so hopefully that will be back relatively soon as well. 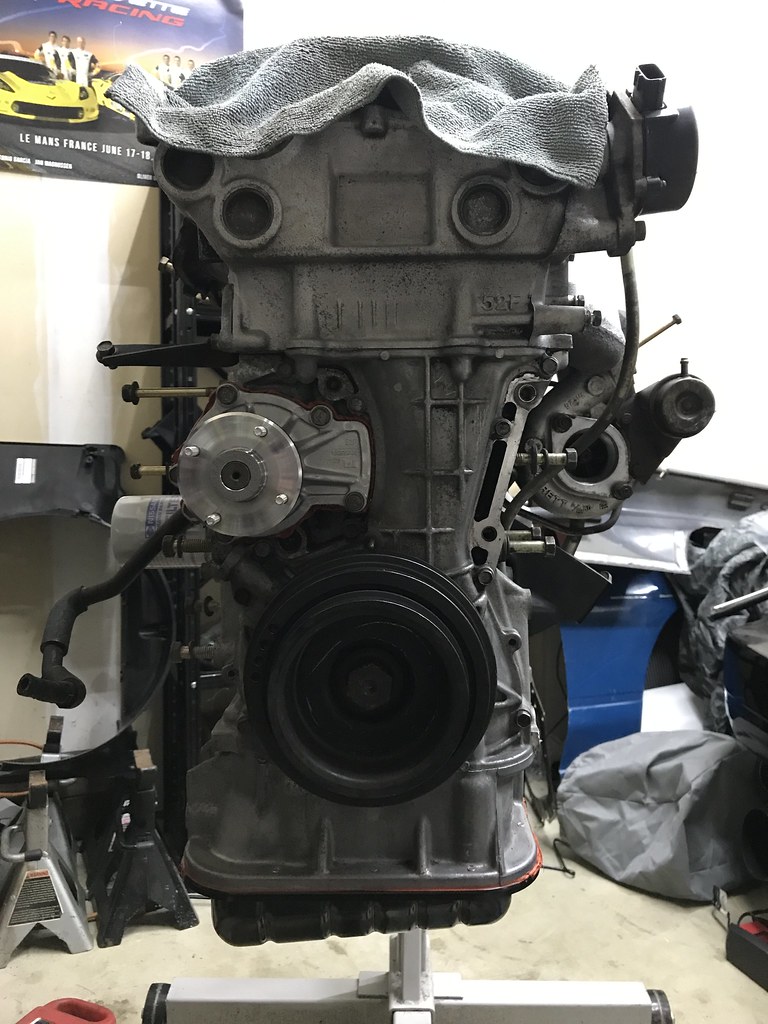 I haven’t done much with the transmission yet, but I should have all of the remaining refresh items that I wish to get into here by early next week. I did manage to install a fresh gasket and the OEM shifter base plate I sourced to replace the ISR short shifter that came on the car though. I also removed the output seal but have not installed the new one just yet. I’ll likely focus more on the transmission side of things once the engine is completely back together. 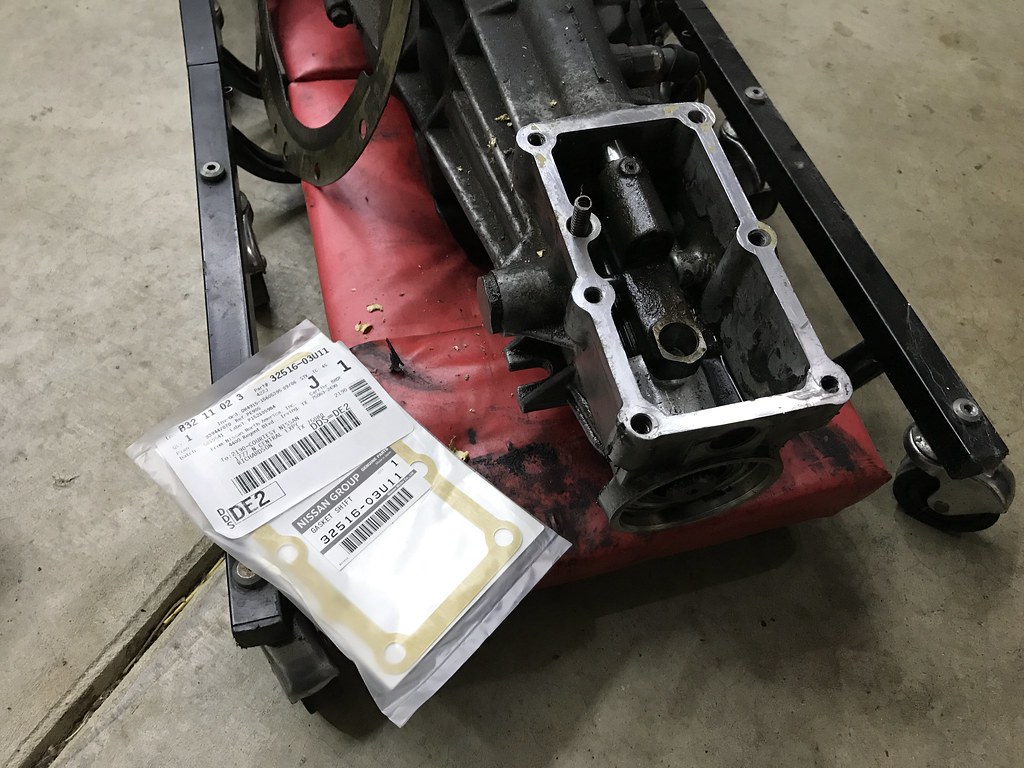 I fell a bit behind on documenting my progress so things have become a bit jumbled, but these are a few of the different parts orders that have arrived in the last couple weeks. I have primarily been sourcing the more common SR rebuild items from NissanParts.cc, while usually ordering all of my hardware and more niche OEM items from CourtesyParts.com. For any SR specific items that are fairly less common, I have been sourcing them from the RHD Japan OEM Store. 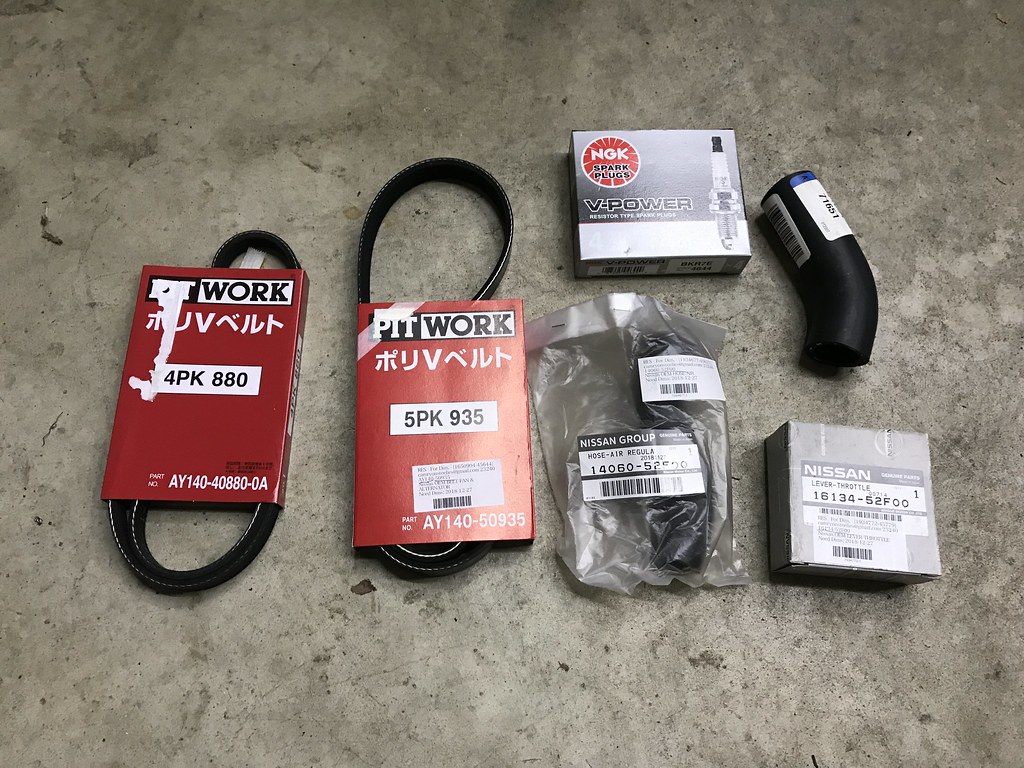 The first shipment from RHD Japan included new alternator and power steering belts, the idle air control valve hose that runs under the intake manifold, and an OEM throttle pulley to replace the GK Tech unit that was installed on the engine when I got it. I also picked up a couple items stateside- a set of spark plugs for the engine and a large coolant hose to replace the unit under the intake manifold. It’s not a perfect fit and will need to be trimmed slightly to fit, but I found that the OEM one was discontinued in Japan. 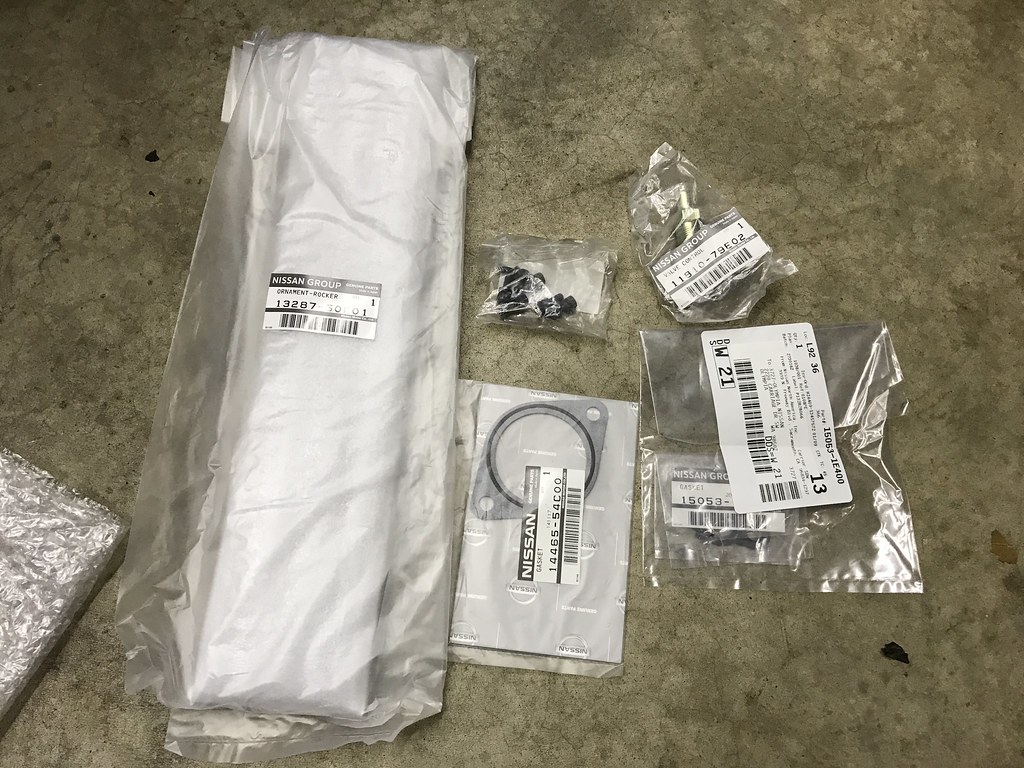 The next batch to arrive was from NissanParts.cc and included a few items that I missed when I ordered my gasket kit- a turbo inlet pipe gasket and S14 oil strainer gasket. While they had a sale running I also ordered a brand new coil pack cover with OEM hardware and a replacement PCV valve to install when the valve cover is back from being powder coated. 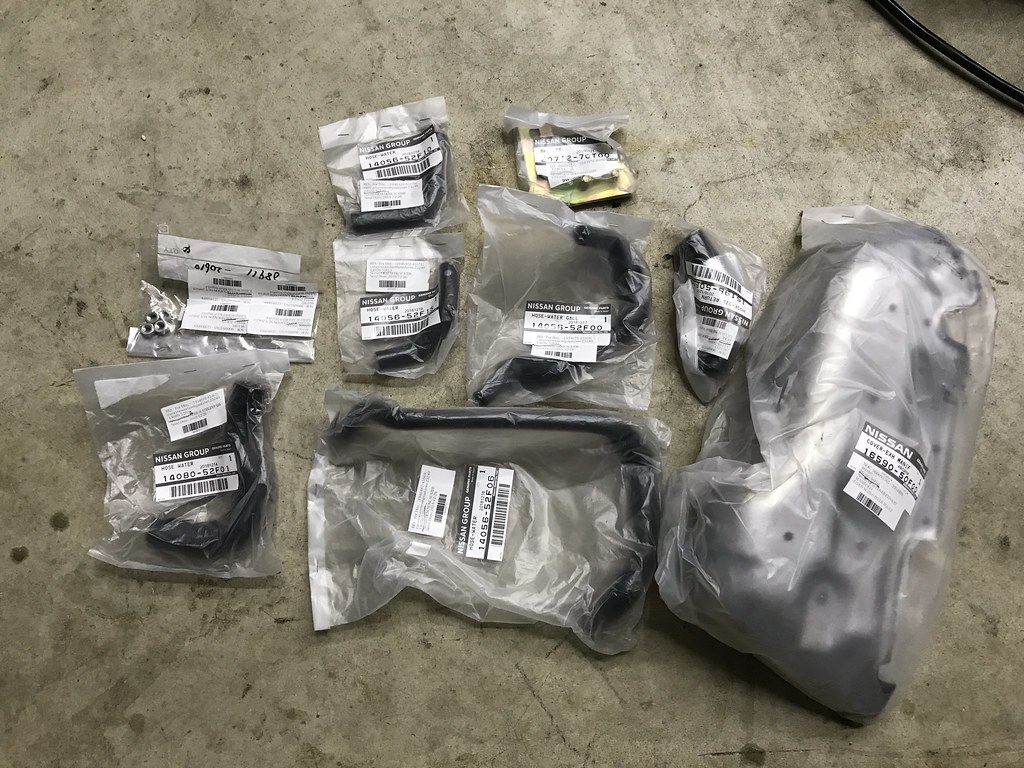 The last order to arrive from RHD Japan took nearly a month due to one of the items taking a few weeks to make it to their facility before the order could be shipped. This batch included three different water hoses that run under the intake manifold, as well as the two water hoses for the IACV. I was really excited to get my hands on the actual Nissan replacements for these as I have always had to come up with my own solution in the past or reuse the old hoses (which always concerns me a bit.) Also included was a  turbo drain hose for the hot side, heat shield for the turbo manifold, nuts for the water pump assembly, and the exhaust bracket that mounts to the transmission mount. I was glad to find this piece as it has been discontinued in the states and is essential to a proper exhaust install. 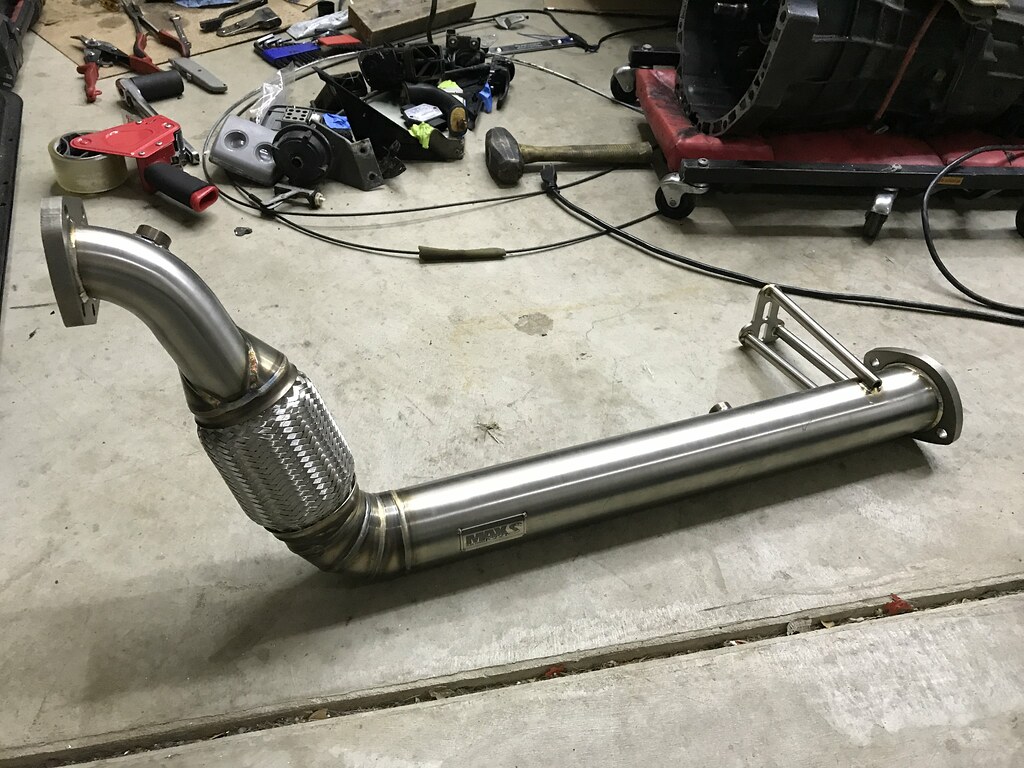 Speaking of exhaust, I found a great deal on a Parts Shop Max Cobra downpipe and I couldn’t pass it up. I’ve been planning to run one of these on the PS13 just like I do on my black car, but wasn’t going to purchase one until later when the car is close to being fired up. I was able to save so much over retail pricing on this brand new unit that I had to snag it while I could. 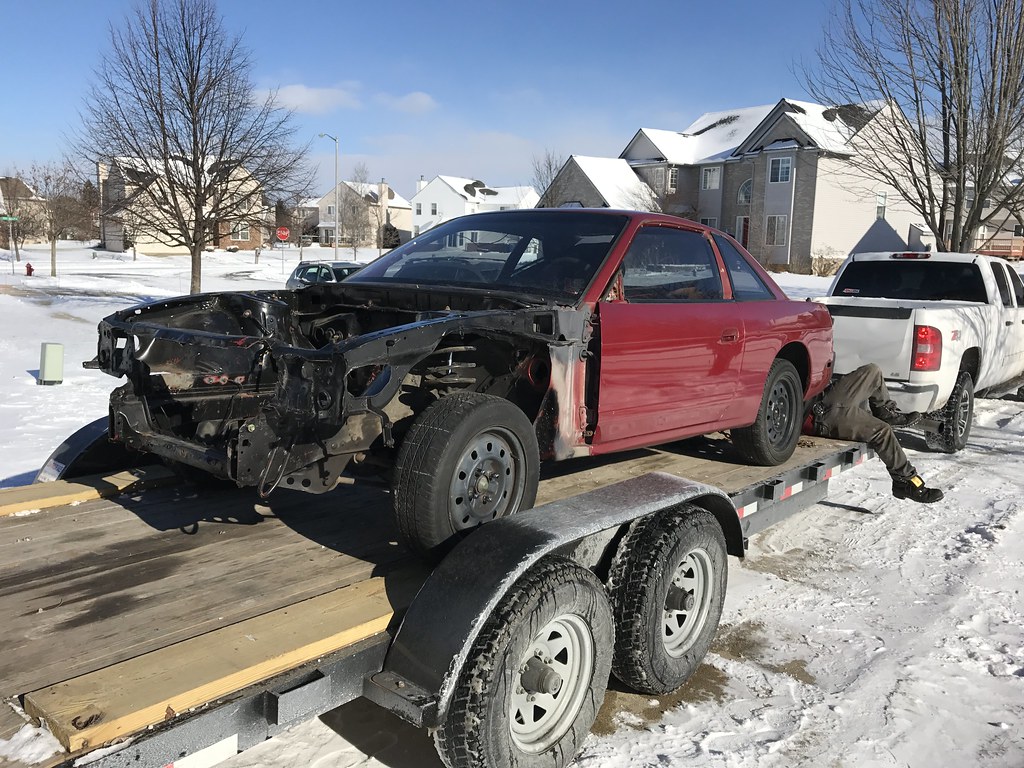 And finally, about two weeks ago I was able to sell the donor car as a mostly stripped rolling chassis. I was thankful someone was able to come and pick it up rather quickly and without much fuss as this allowed me to put my wife’s van back in the garage before the really nasty weather hit. I still need to sell the wheels and tires from that car, but otherwise all of the items are gone and cleared out of my garage. I’m really thankful for how well buying and parting that car worked out. I never anticipated having a complete drivetrain for the new PS13 build so quickly, but things could not have worked out better with buying and parting out the donor chassis. Sometimes things just fall into place!

So there you have it! That’s where everything stands with my garage at the moment. I’m looking to harness the mild weather this weekend in order to get organized and make some more progress on the PS13 SR20 setup. February and March are typically the most difficult months to make it through here in Michigan, but I’m feeling pretty motivated.

Thank you as always for reading the blog- I appreciate the support! Have a great weekend.