Posted on March 8, 2019 by camryonbronze

I’ve seen a lot of varying opinions expressed online as of late about the morality of stripping an S13 of its parts and scrapping or otherwise disposing of it. I thought it might be fun to talk a bit more about this issue and try to understand both sides of the coin where S13s are concerned in 2019. 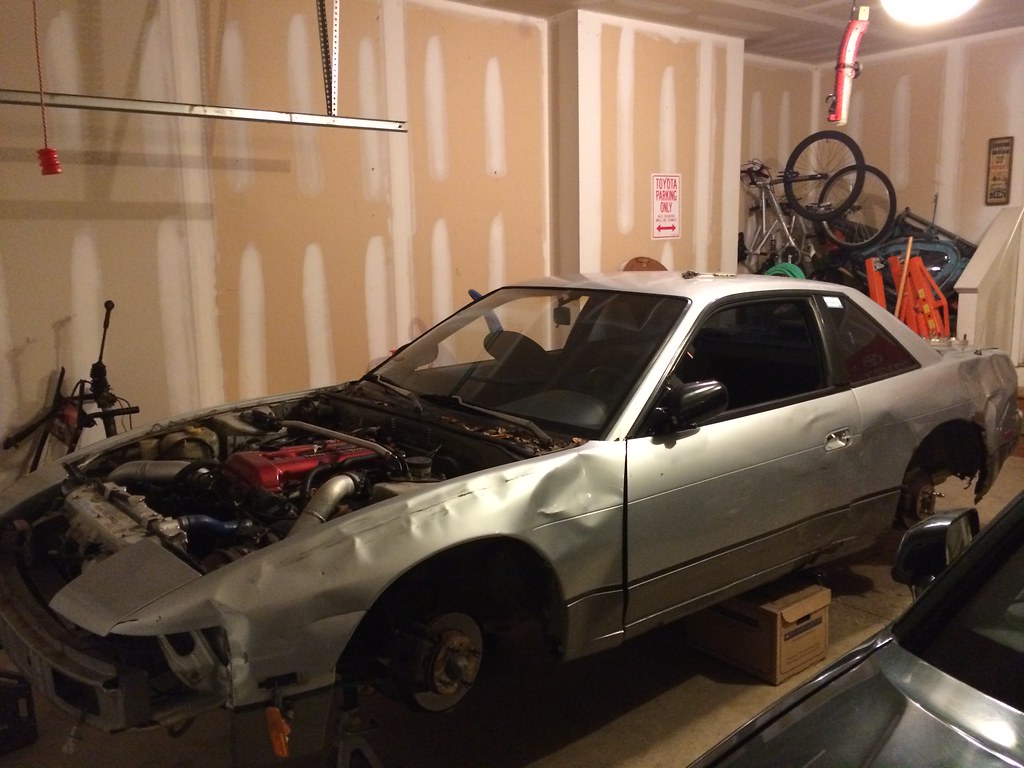 Would you feel guilty about parting this thing out?

I’ve purchased a couple of S13s now where my sole intention from the get-go was to part them out and use the drivetrain for my own builds. The first was my two tone coupe that I bought in 2014. My friend Tim had purchased it for a really good price and was going to swap the SR20DET into a cleaner chassis, but decided to stick with finishing his LS swapped FD instead. I had just bought my old 240SX shell back to rebuild and needed an SR swap for it, so this was the perfect opportunity for me to snag one that I knew was in good, running condition for a great price (as opposed to taking a gamble with an importer.) 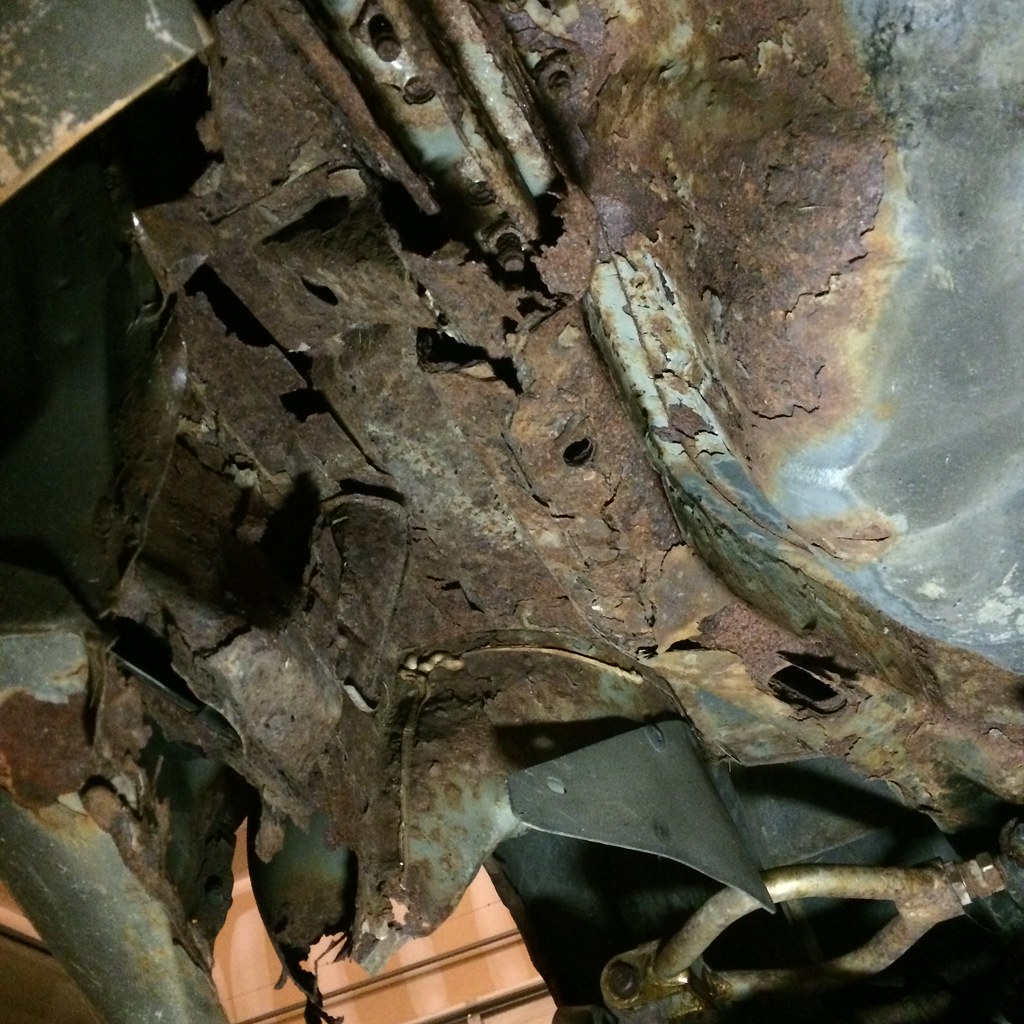 Only a small portion of the rust that was on this thing.

The chassis itself was in absolutely horrid condition. The blue interior (which no one seems to want) had mice living in it, the quarter panels were smashed in, and you could clearly see the ground through the rust in the trunk. The frame rails both completely fell apart when I lifted the car to remove the drivetrain and the jack stands shot through the floor, breaking the fuel and brake lines in the process. By any stretch of the imagination, this car was nothing more than scrap metal. After I removed the drivetrain, two way differential, and coilovers, I sold the rolling chassis to someone for $200 or so. I believe they wanted to try to cut off a portion of the front end to use on an S13 that had been wrecked, but I am not sure if this ever happened or not. 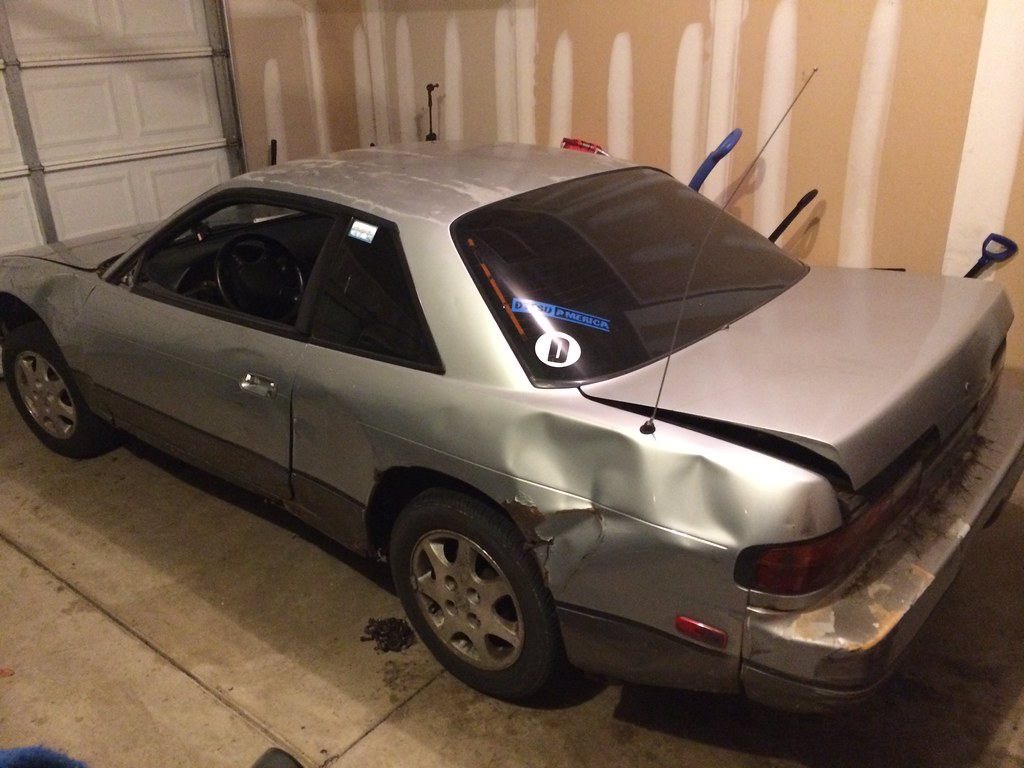 That will buff out, right?

Some local people were upset with me for not “saving” this chassis. They told me it all could have easily been repaired- all I needed to do was cut out the rust and add some new metal. This would be an absolute waste of time in my opinion, but to each their own. I felt that by selling the chassis whole instead of crushing it, I was giving someone an opportunity to save it should they have the time, knowledge, and motivation to do so. I think it is highly unlikely that the car ever saw the road again, but would it have benefited the community much if I had not taken it apart? Possibly, but I think that SR20 living on in my black S13 offers a lot more to the S chassis scene than trying to save that car would have. 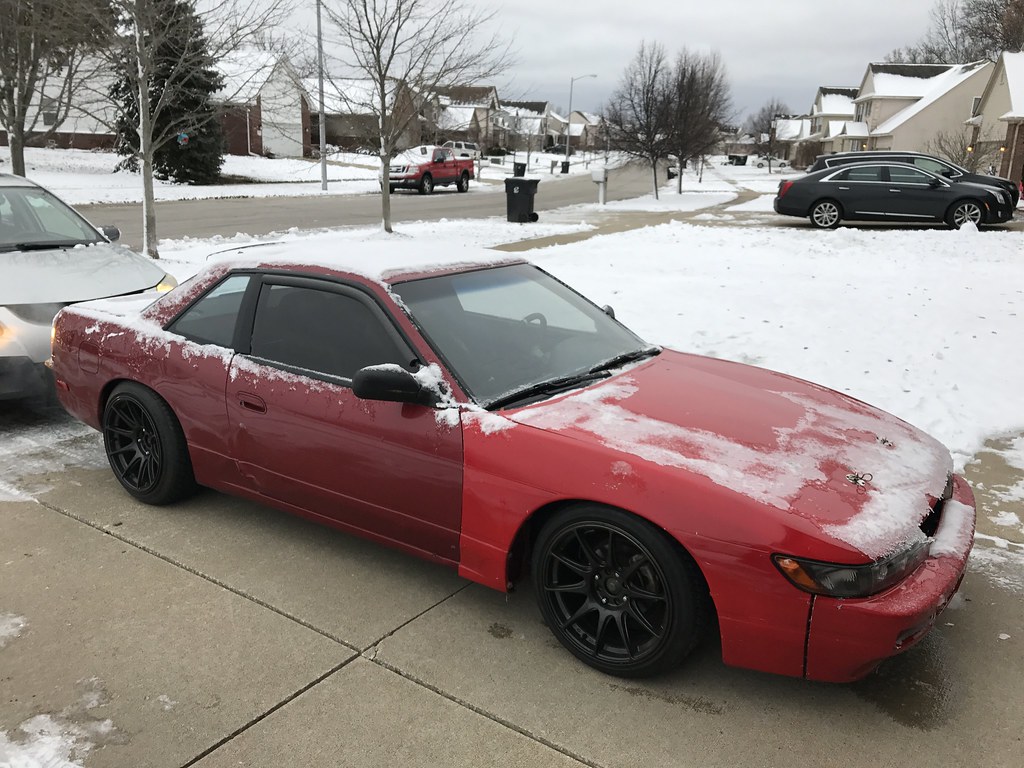 While this coupe appeared to be much nicer than the two tone,
it definitely had its fair share of problems.

I recently repeated this process last November by purchasing another running and driving S13 coupe with an SR drivetrain to serve as the donor engine for my champagne rolling chassis. I saved the engine swap, radiator, and Silvia hood for my own build and sold the remaining items to other people to assist with completing their own builds. While I stripped the chassis fairly bare, I did sell it as a roller for $300 to someone local that plans to use it to build a drift car. Like the other coupe I parted out, I am not sure if it will ever see the road again- but if I had not done this, that person wouldn’t have found a car to build on that met their budget and specific needs. This chassis also had its share of rust and a number of areas had been repaired with new metal including the floor and frame rails (which, of course, was not disclosed to me when I bought it.) For most of us this chassis would not have been clean enough to work from to meet our standards. 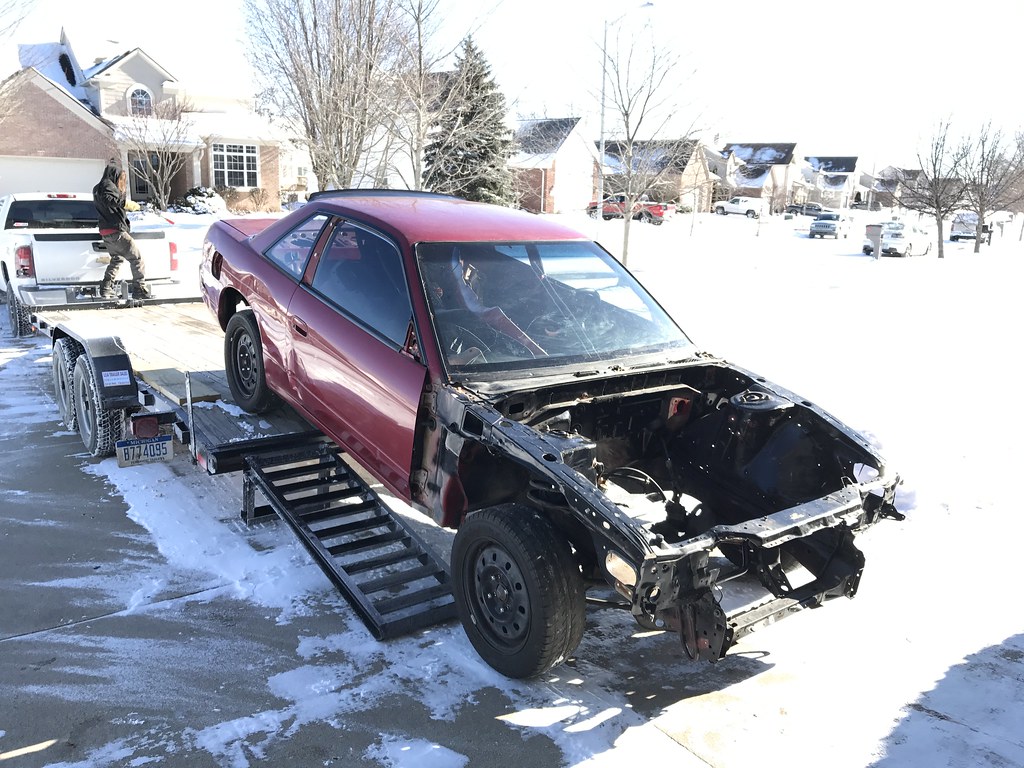 The stripped rolling chassis heading to its new home.

People are often outraged to see S13s being parted out- and I can understand their frustration in many ways. There are only so many decent examples of these cars left on this planet and the numbers seem to dwindle by the day. However, I think a lot of good can come out of these cars being picked apart. Part outs allow those of us that wish to rebuild these cars to a higher standard to obtain the components we need to do so. Many of the parts have been discontinued at this point so there isn’t much hope for fixing them up without buying things from another car that has been taken apart. While it may reduce the number of S13s left in the world, it increases the number of quality examples- which I think is something we should all strive for. Don’t get me wrong though- would I want to see a super clean, bone stock S13 chassis get completely stripped apart for parts? Of course not. But so many of these cars have been beaten within an inch of their lives at this point that I think parting them out only makes sense. 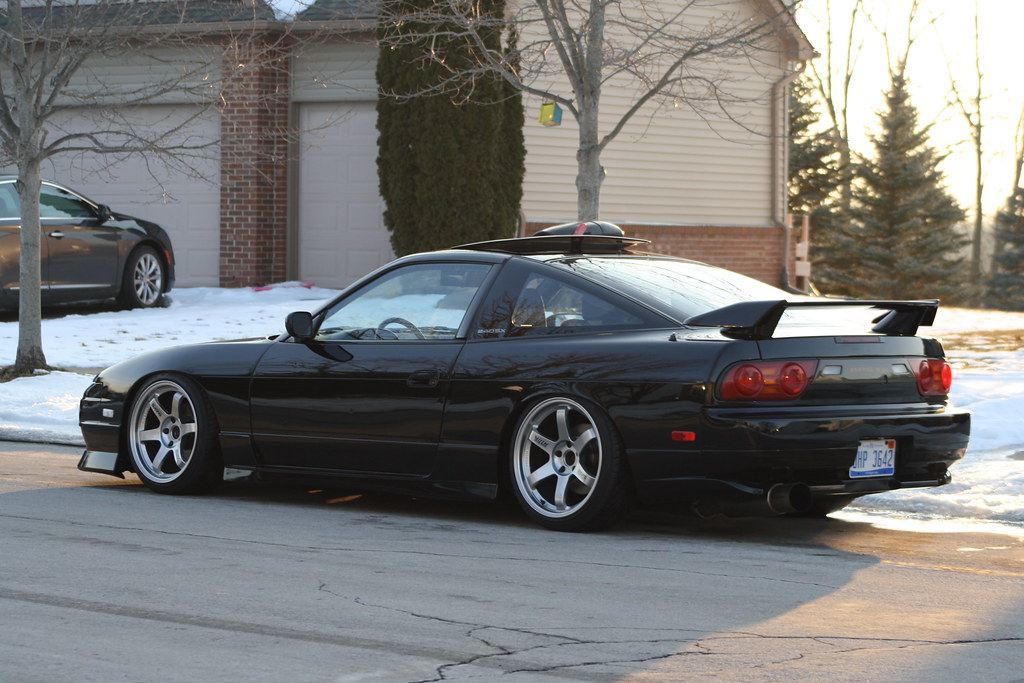 The SR20 drivetrain from the two tone coupe now resides here- seems like a better solution, no? I hope to have a similar success story to share for the engine from
the red coupe in a few years time.

I’ll always be just as bummed out as the next guy to see an S13 being ripped apart or neglected, but in a lot of ways I would almost see that happen instead of seeing junky, poorly-executed cars on the road. If a 26 year old chassis (best case) is riddled with rust or major body damage, it’s unlikely that 99% of people are actually going to invest the time and money into that car to save it. Removing and selling (or giving away) all of the useful components from these cars allows others to further preserve their own examples- which helps allow more people to enjoy and appreciate the S13 chassis. It’s a win-win in my book.

What do you think? I would love to hear your thoughts. I’m always open to discussing anything related to these cars so feel free to drop me a line.