Posted on March 1, 2019 by camryonbronze 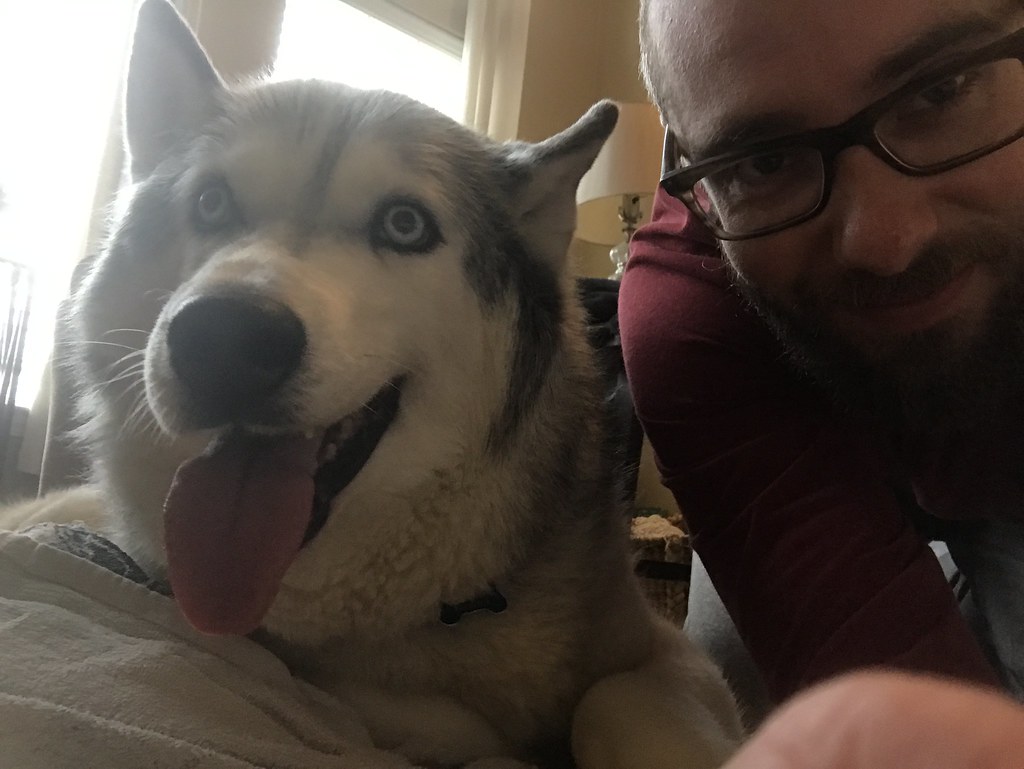 To be completely honest, this has been a difficult week for my family. Our Siberian Husky Tomei passed away unexpectedly on Tuesday morning and it has been really hard to deal with. He stopped eating over the weekend and was very lethargic. We took him to the vet on Monday morning and they determined that his spleen was enlarged and he had fluid around his heart in addition to his heart rate being through the roof. The vet thinks he may have had a heart issue for quite some time and there wasn’t really anything that could have been done to help him. We got Tomei just a couple months after we bought our home in 2010, so it has been a really weird adjustment to get used to. Thanks to everyone that reached out to wish us well this week- it meant a lot to us! We are really going to miss him. 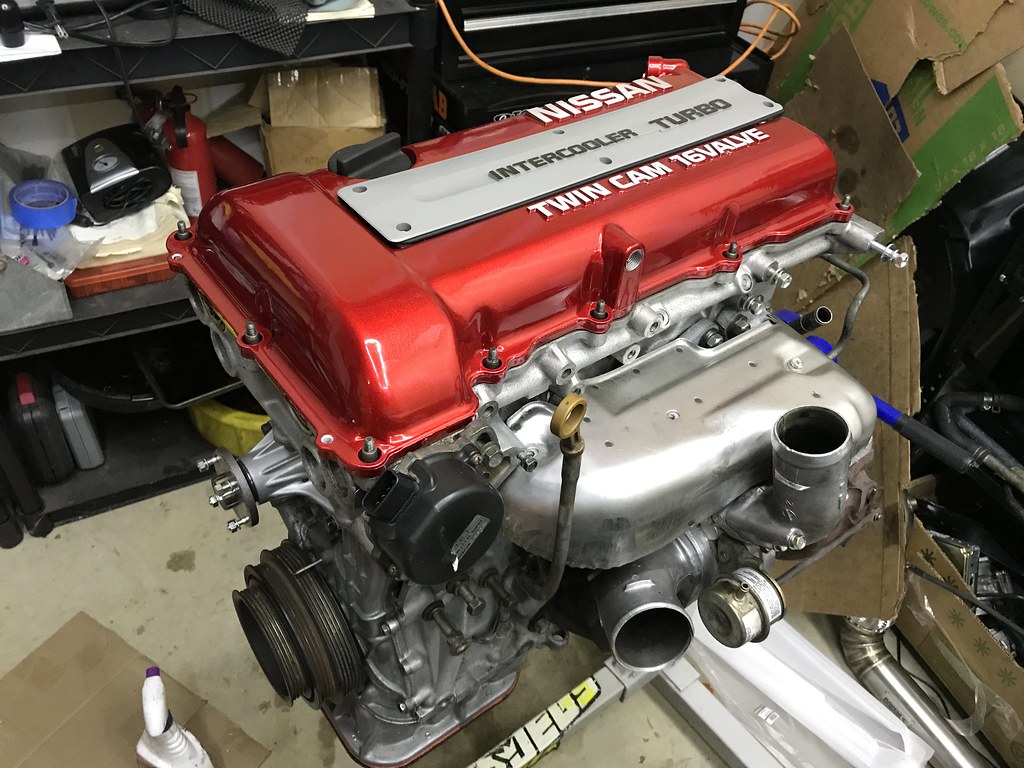 Despite being a bit scatterbrained, it felt good to spend some time in the garage last night and work on the SR20 for the coupe a bit. I haven’t shard engine progress in a while since I haven’t gotten a lot done, but I’ll try to get everyone up to date. If you recall, the T25 that came on this SR had a weird clocking issue and wouldn’t bolt up to the manifold properly. A friend sent me his old T25 and I was able to get everything reinstalled again along with the new OEM manifold heat shield I sourced from Japan. I also tossed the water neck back on. 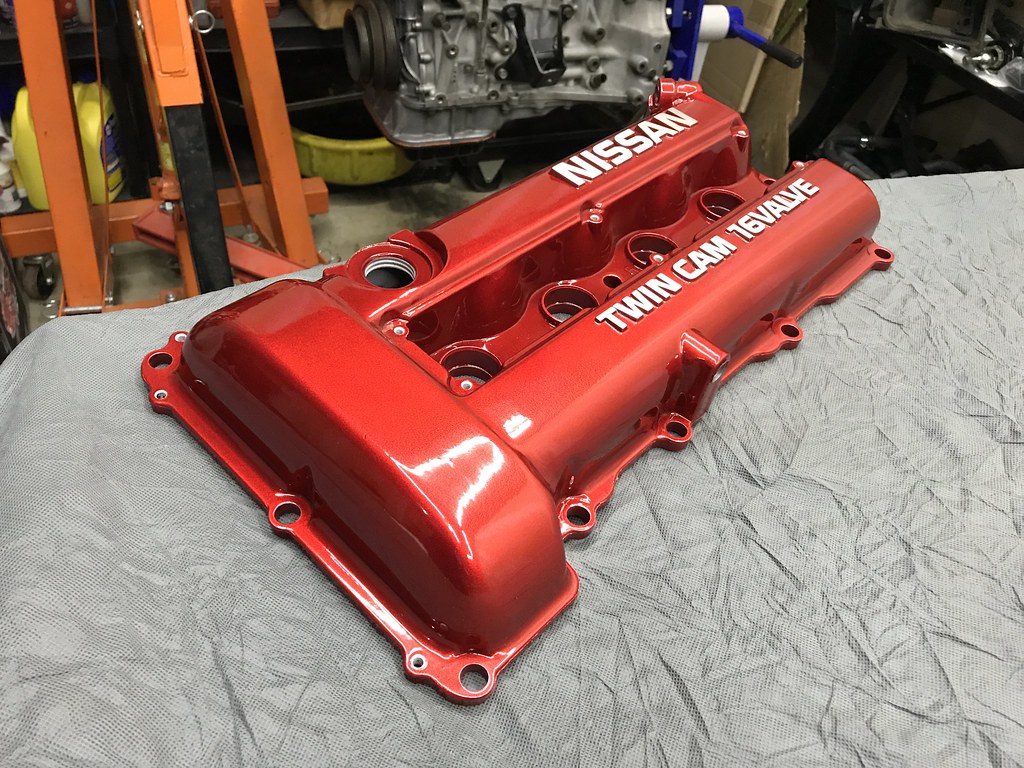 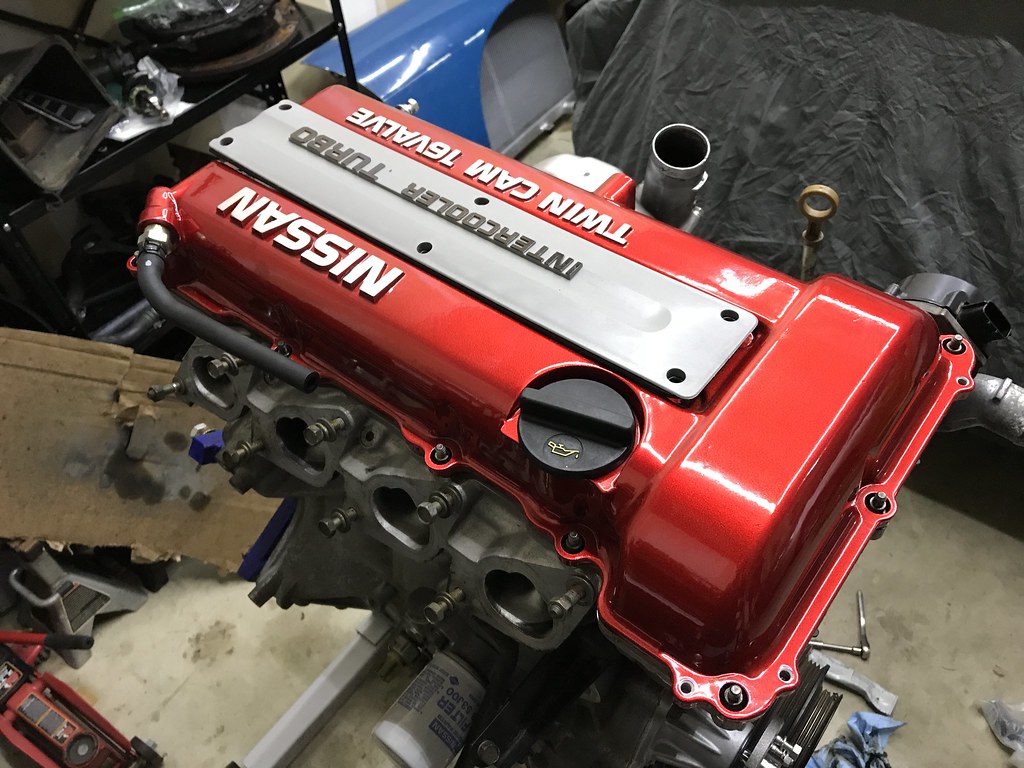 As you may have noticed, I got my valve cover back from TRG Coating and I am really pleased with how it turned out. I wanted it to be pretty similar to the factory SR20 redtop color so I ended up going with the same color my friend Greg just had done for his SR- looks pretty nice! Installed a fresh PCV valve and hose (yes, I bought the actual hose from Japan- how nerdy is that?) in addition to a new valve cover gasket, but stopped there since I don’t have the new washers and nuts for installing the valve cover yet. Once those arrive, I can bolt it down and install the new spark plugs, coil packs, coil pack cover, and catch can setup. 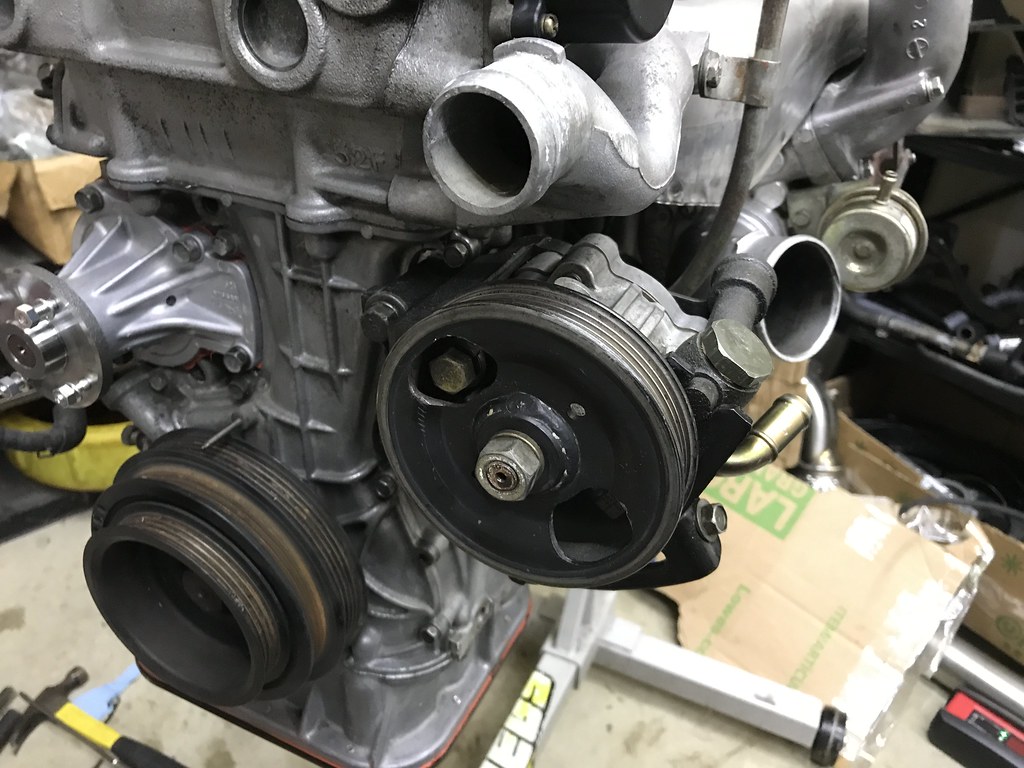 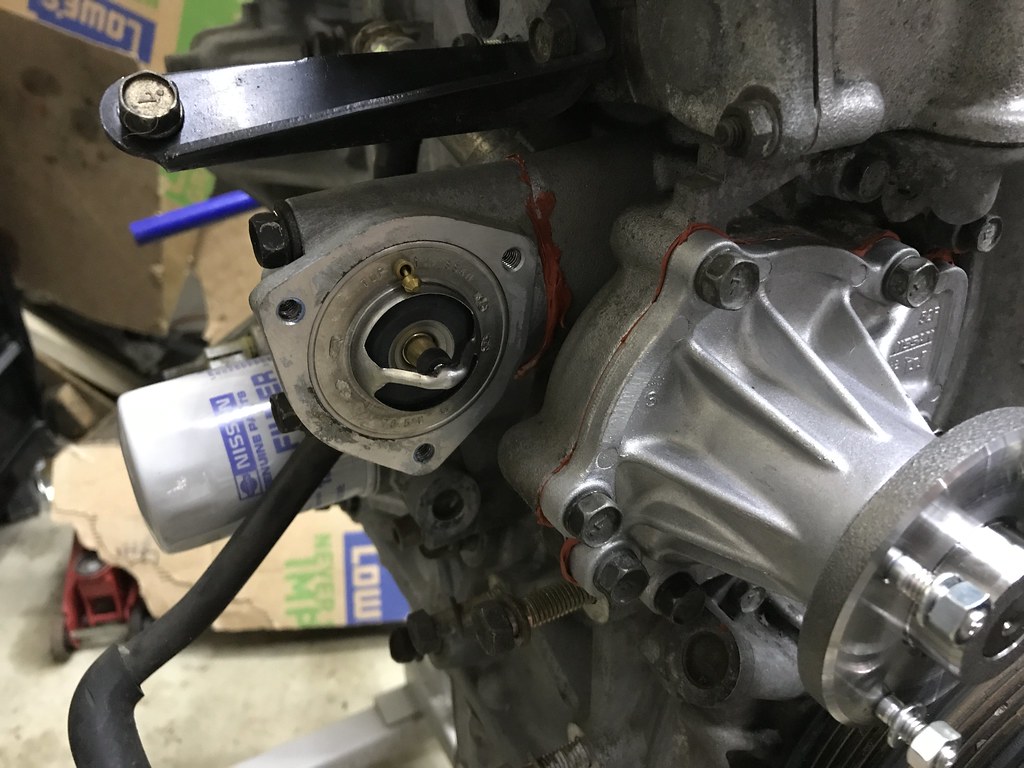 Last night I started by cleaning and installing the power steering pump and bracket. Next came the thermostat housing and a new thermostat from Nissan. I didn’t elect to go with a NISMO thermostat since the engine is relatively stock and only sees light street duty. The Koyo radiator and factory clutch fan setup should be more than sufficient. 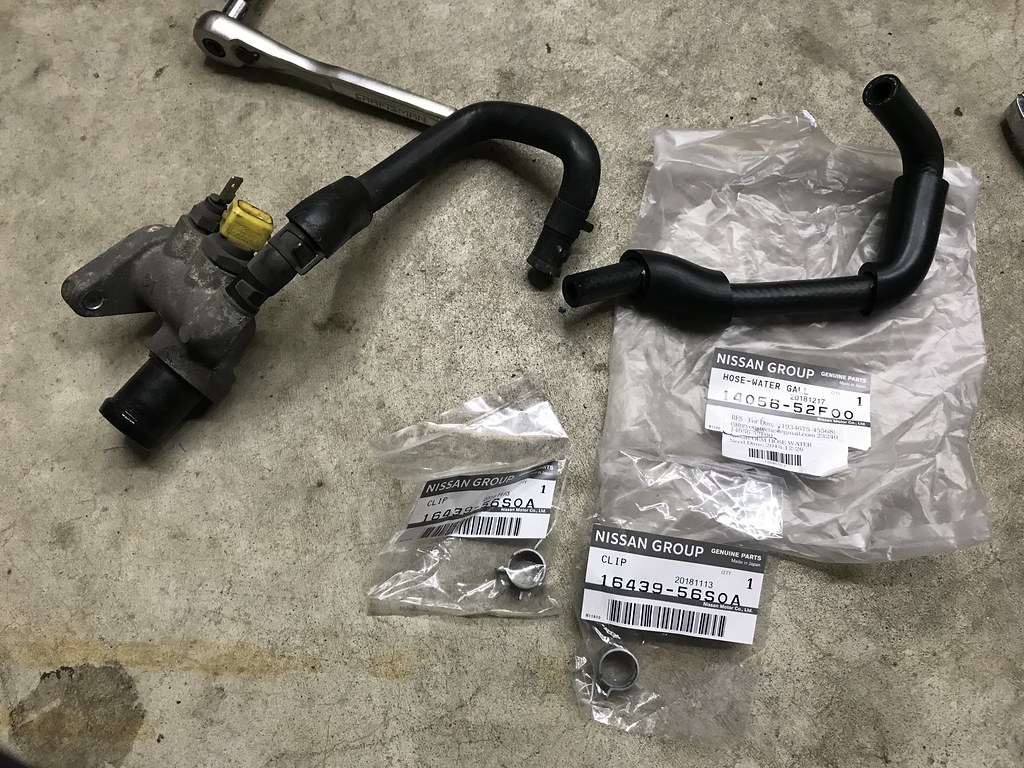 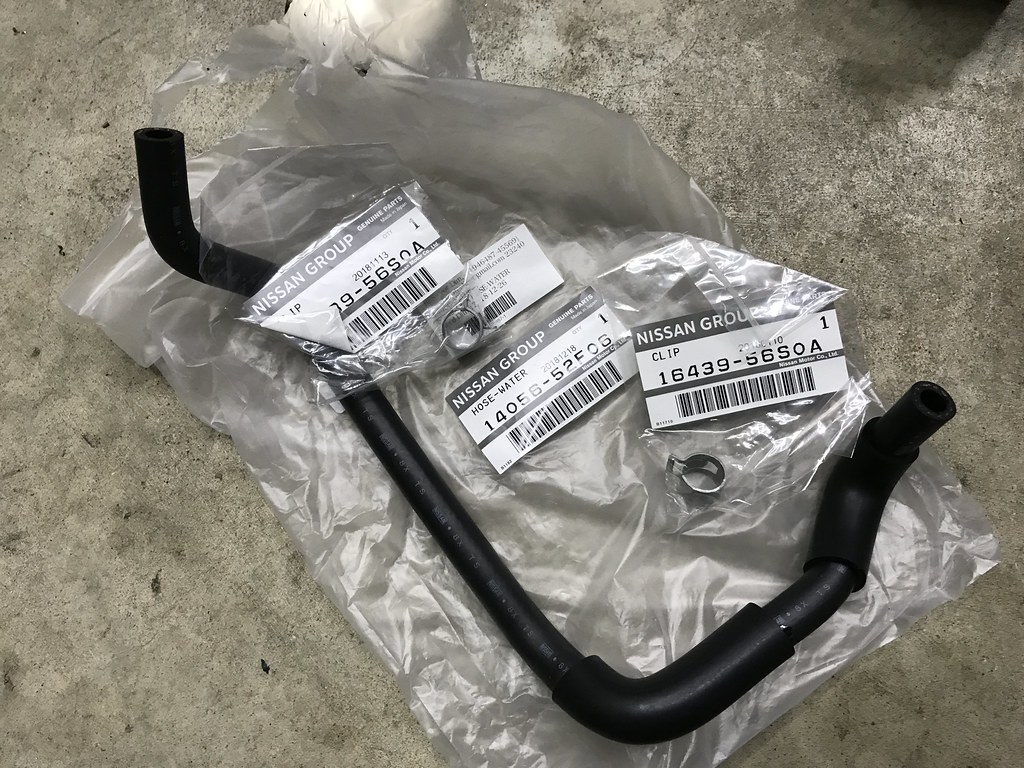 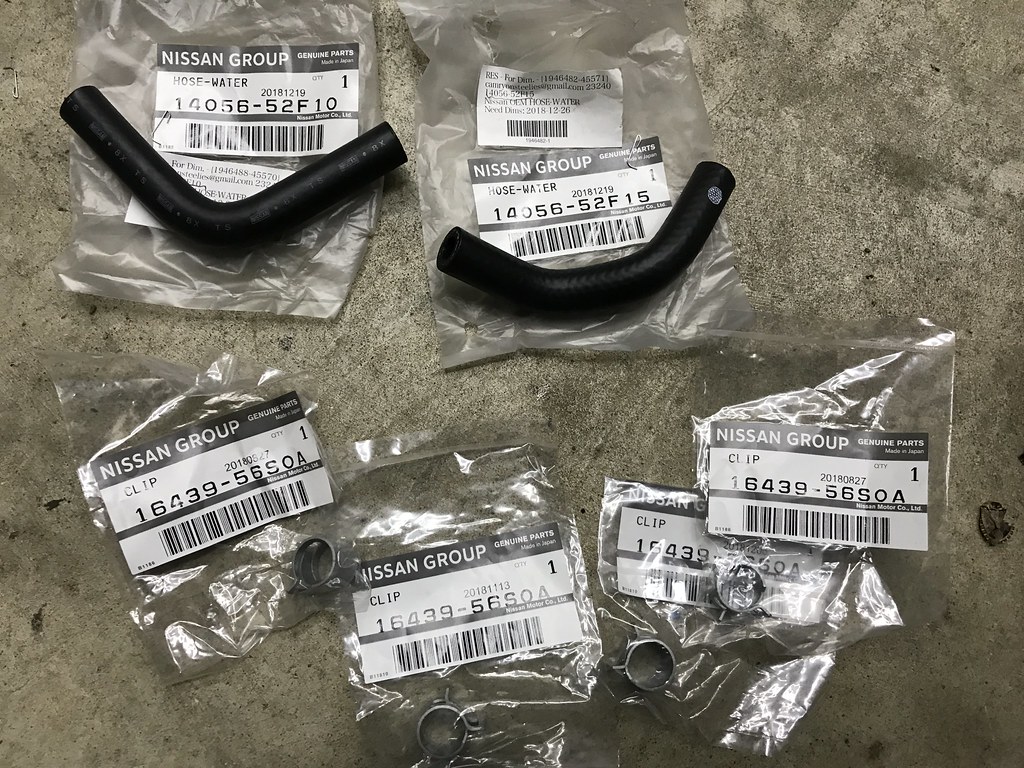 These are the coolant hoses and clamps for the IACV. 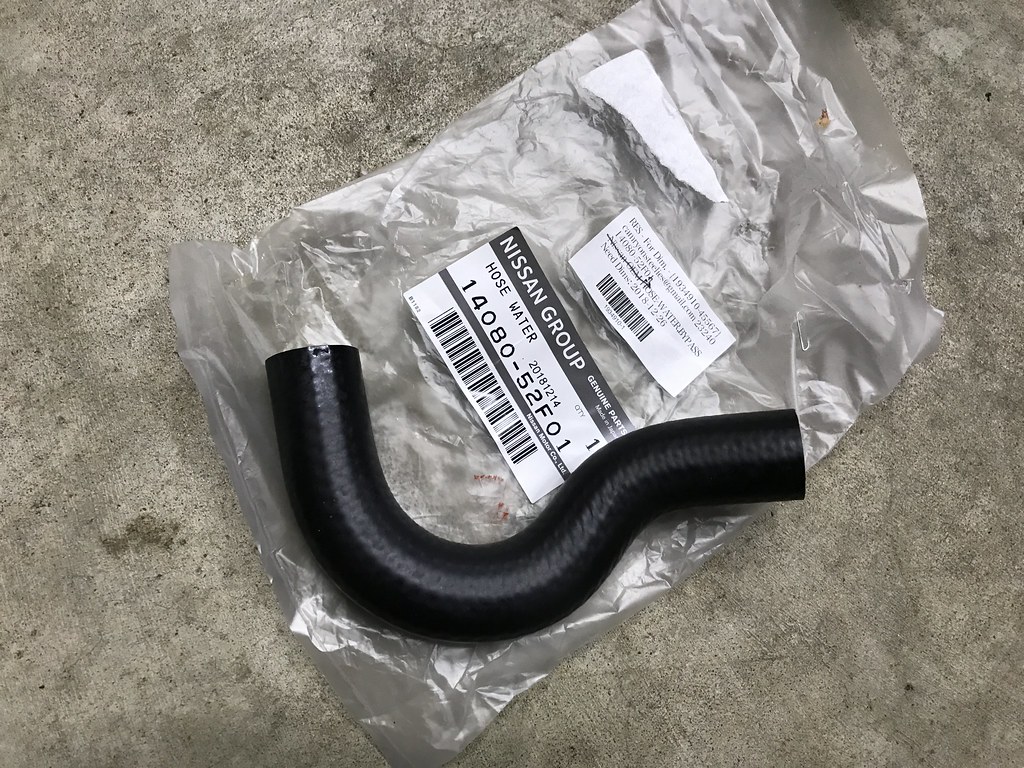 I next moved on to breaking down the intake manifold a bit and installing a slew of new coolant hoses and clamps. I purchased as many coolant hoses as I could from Japan which is really satisfying. On my previous SRs I have always just left most of the hoses alone or used generic stuff from the local auto parts store. I would eventually like to go back and do the same thing for the engine in my hatch at some point if I can since I am sure most of those hoses are really brittle as well. 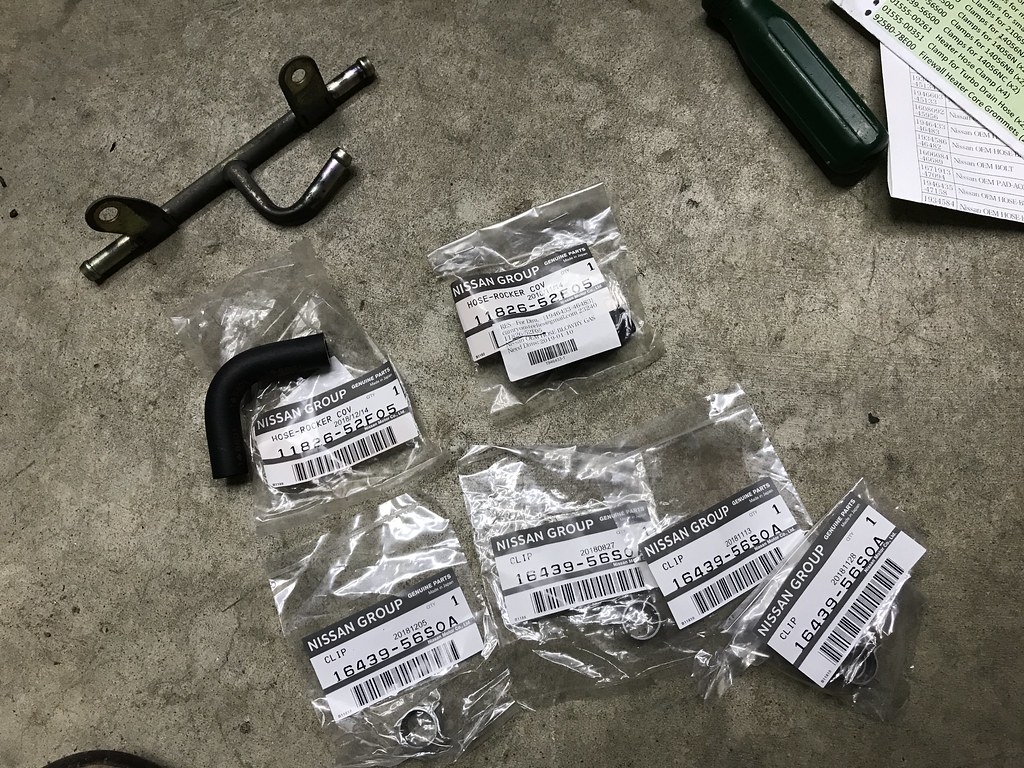 I even managed to snag the PCV system hoses that bolt near the fuel rail. Mine broke apart when I removed them so I was glad to have these. 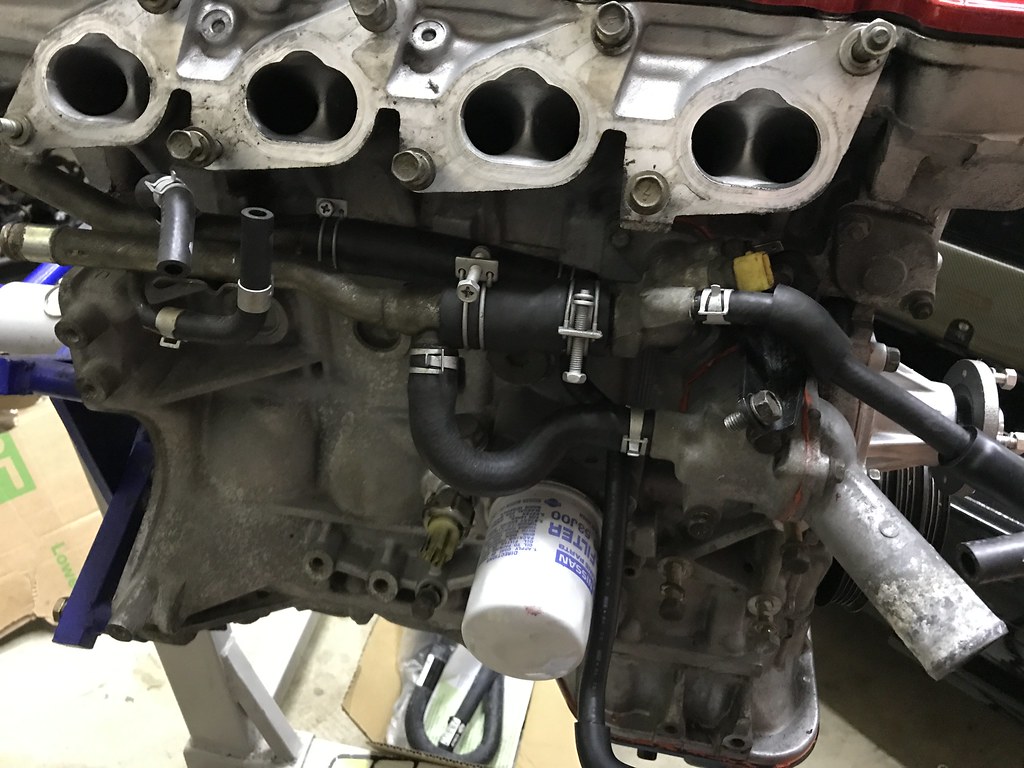 The main hose assembly is now bolted back up- the only thing I need to do is modify the metal tube assembly a bit to get the heater core hoses to mount properly. I did the same on my hatch and it worked out pretty well, so we’ll see what I can come up with. All of the hoses were replaced with genuine Nissan replacements aside from the two straight hoses- those have sadly been discontinued, so I had to improves on those. I did replace all of the clamps with new units from Nissan though. 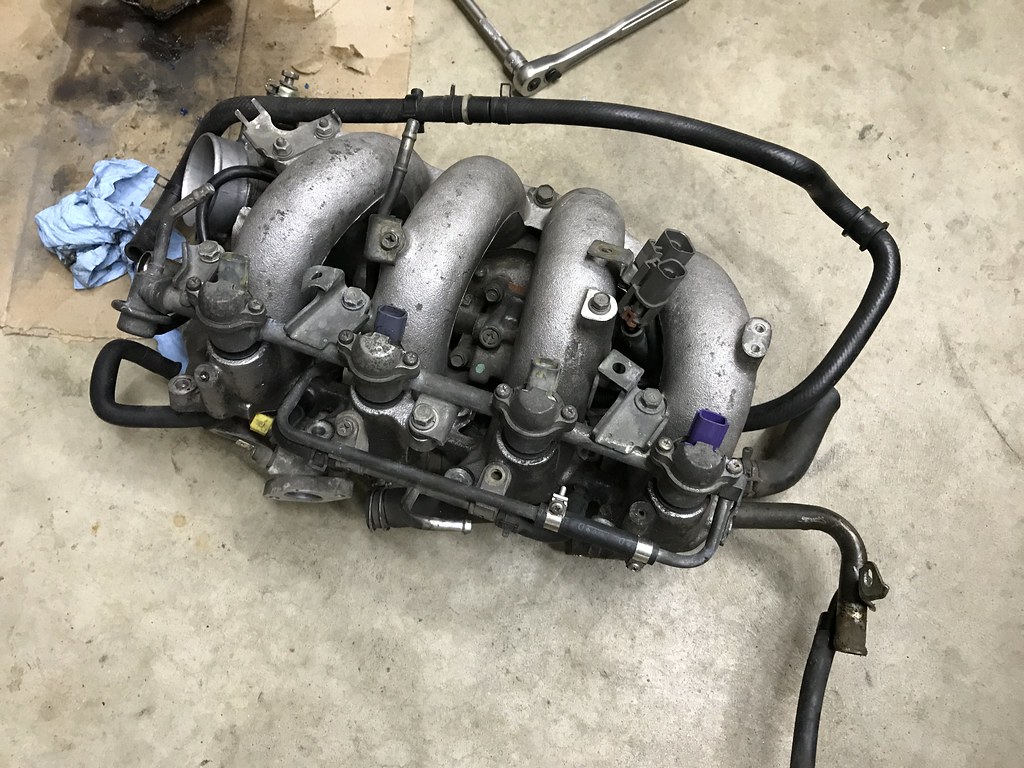 The next thing I will need to do is finish breaking down the intake manifold and clean everything before replacing the gaskets, as well as the gaskets for the throttle body and idle air control valve. This feels like a good amount of progress though! The engine should be completely back together in the near future- but fortunately there’s really no rush. 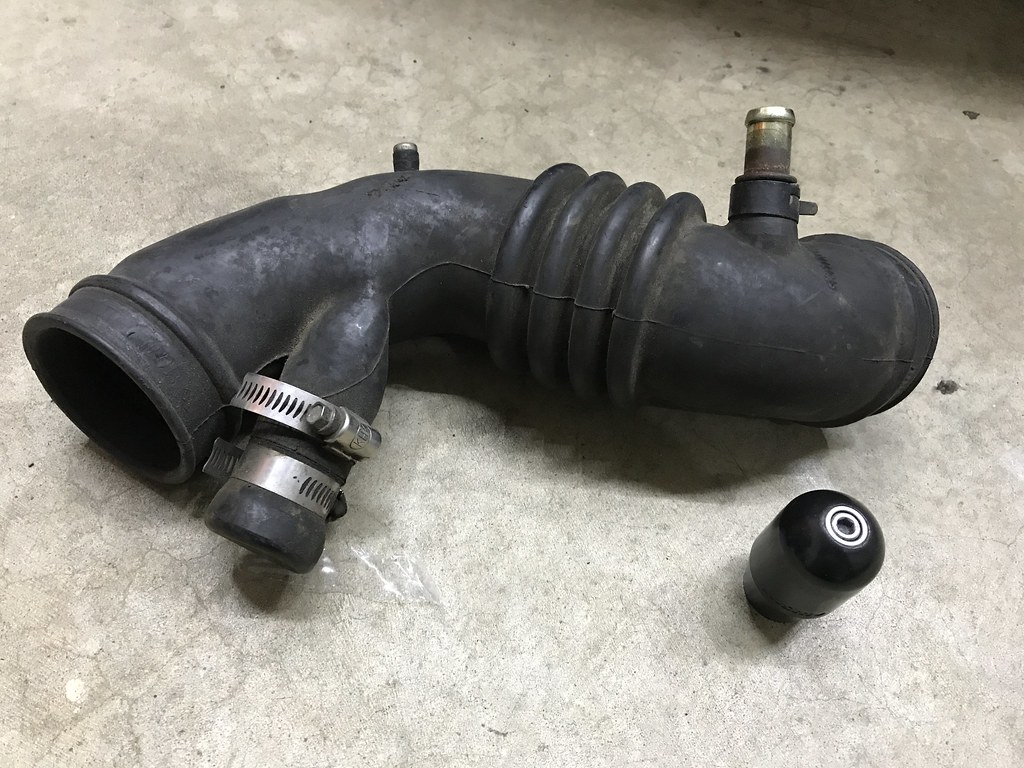 Not many new parts to report this time aside from a stock intake tube
and a NISMO GT shift knob.

I’m really anxious to have the coupe shell home to work on it this spring, but it will likely still be a couple months before that happens. There’s some rust I need to address in the engine bay before the engine can be dropped in, but it will be great to see this thing sitting in the bay when it is all back together.

Thanks as always for stopping by- much appreciated! Have a great weekend.

2 Responses to And Suddenly, It’s March