Let There Be Light

Posted on February 22, 2019 by camryonbronze

With my S13 coupe chassis currently being stored an hour and a half away from my home for the winter, there’s not a lot of actual progress related to the chassis itself to be shown here on the blog. I have been focusing most of my time and energy on refreshing the SR20 swap for the car since I have that here at home in my own garage. As a result, that is what most of the build updates surrounding my second S13 have focused on thus far. It’s still a lot of fun, but there’s something about putting all of this effort in and sharing progress without seeing photos of a physical car that feels a bit… well, boring. 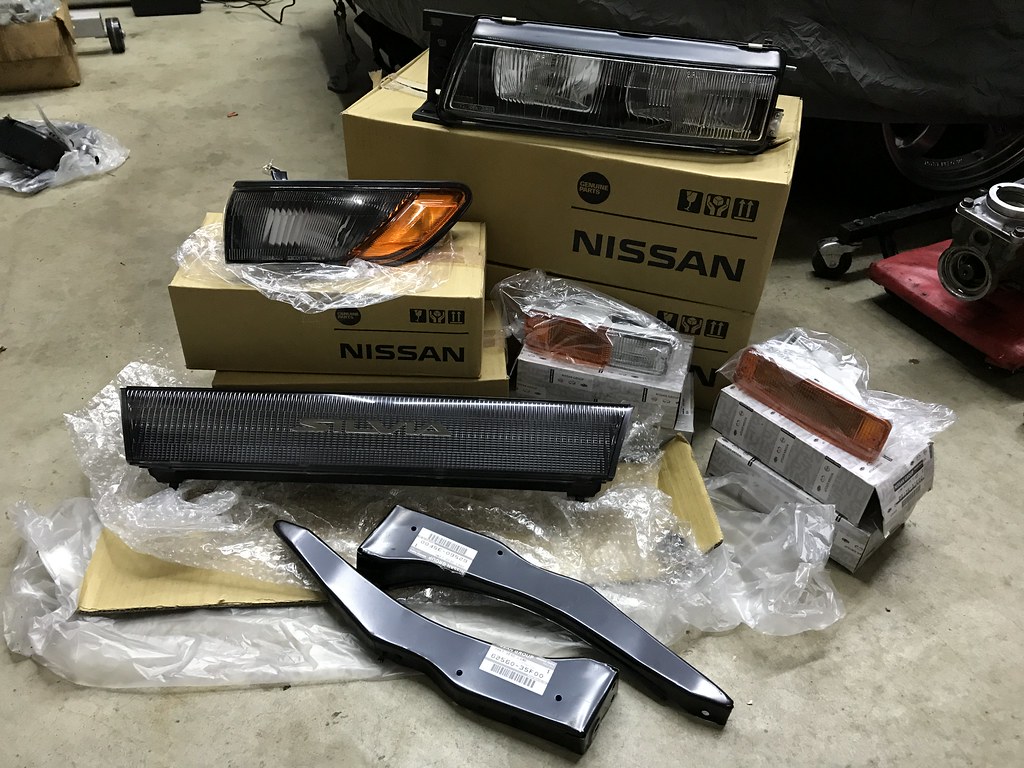 While the bulk of the content so far is centered around the coupe’s power plant, there are other things happening behind the scenes. In fact, I collected a few miscellaneous items prior to even owning a coupe chassis just on the off chance that I would someday day be able to build one. Since the production period on the PS13 was much shorter than the 180SX, we are well into the time where items are being discontinued by the day and certain restoration parts are becoming increasingly difficult to find.

Before we dive in, here’s a bit of back story for context: One of my first experiences with the S13 chassis was through a friend of mine named Mike. He worked at AllSpeed Performance, a shop in West Michigan that used to work on and tune my Toyota Solara in college. Mike bought a champagne S13 coupe just like the one I have now with an SR20 swap and built the car from the ground up. One of the items I assisted him with late one night was installing a Silvia front end on the car. My Solara did not have any “JDM” parts available for it since it was only sold in North America, so I thought this was the coolest thing at the time. In fact, when my Solara was totaled a few months later and I began researching S13s shortly before I bought mine, I had saved tons of photos of S13s with Silvia front ends- even some of them being Sileighties. I considered doing the same to my own S13, but thankfully decided not to go through with it. To make a long story short, I’ve wanted to complete a Silvia front end swap on an S13 chassis myself for over ten years now. 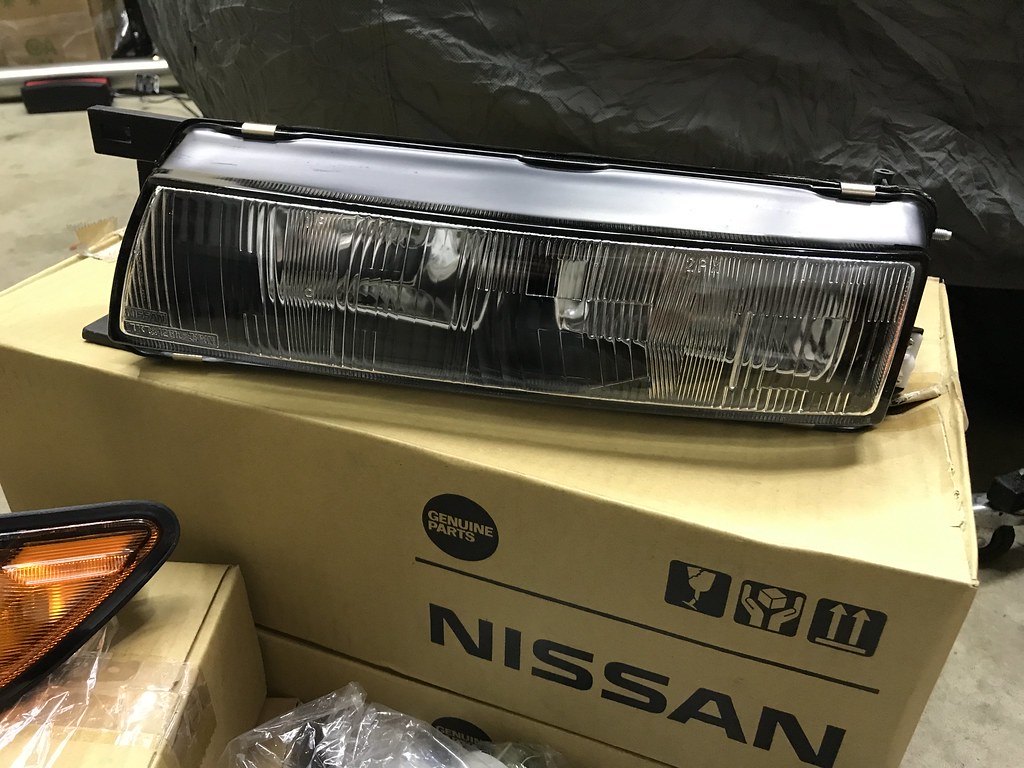 Ok, back to present day. I knew that at some point down the road I would hopefully have the chance to build an S13 coupe with a Silvia front end should the cards all fall into place. Arguably one of the most difficult items to find for a decent price these days is a pair of PS13 “brick” headlights in good condition. Examples of these lights with broken mounting brackets often sell for outrageous prices which makes locating a reasonable set fairly difficult. The Double and Triple projector versions can be had used for much less, but don’t offer the same tough appearance (though they do have much better light output.) With the prices I was seeing used pairs of these lights for, I decided to see if it would be possible to find the part numbers and source a brand new pair from Japan for about the same price.

As luck would have it, I was able to do just that. Who knows how long these sat on the shelf for in Japan, but I am fortunate enough to say I’ve got a pair of brand new Silvia brick headlights sitting in their boxes patiently waiting to make their way onto a car. It was a pretty awesome feeling pulling these out of the box for the first time- super cool. I recently ran the part numbers again to see if there were more available and one side bounced back as discontinued. It’s likely these are one of the last pairs of brand new brick headlights to come out of Japan. While I missed the boat on some new PS13 parts, I am thankful I wasn’t too late joining the game to get a hold of these. The thought of actually installing and abusing these lights is a bit difficult to handle, but I guess it doesn’t make a lot of sense to let them sit in a basement either. 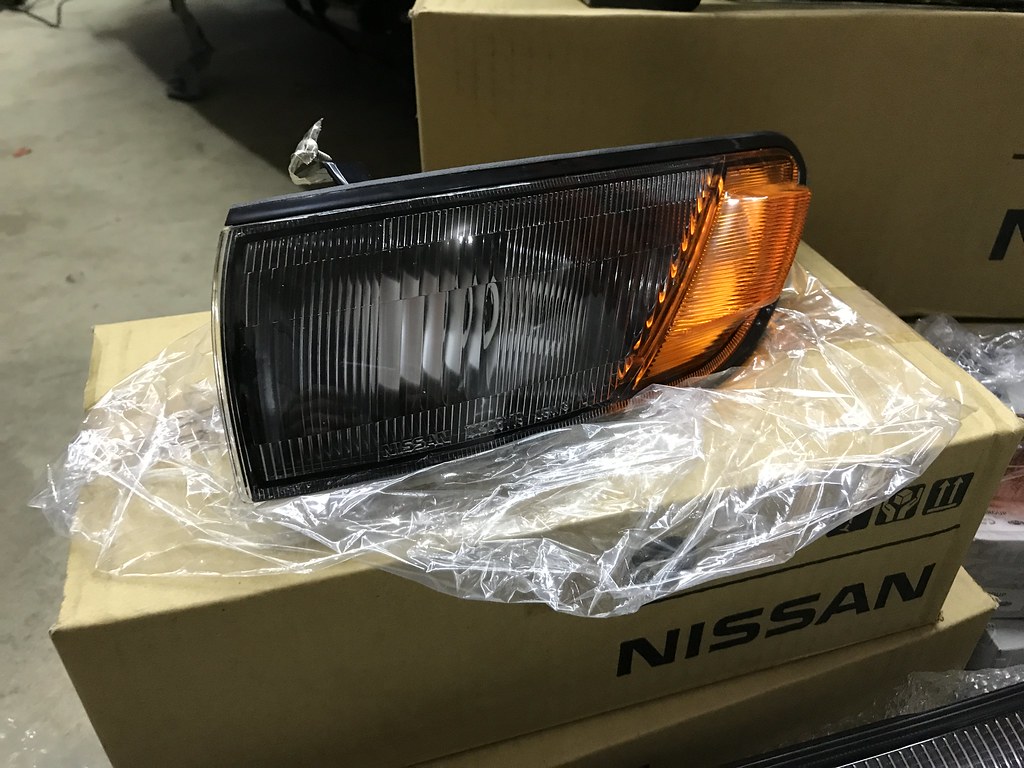 After securing the holy grail of PS13 lighting, I decided to try my hand at some of the other lights on the front end. I purchased a pair of brand new corner lights and had them shipped over from Japan- again, for roughly the same price as a pair of these without any broken tabs typically sells for in the states. They also include mounting hardware, bulbs, and the proper bulb sockets for them which is a huge plus. 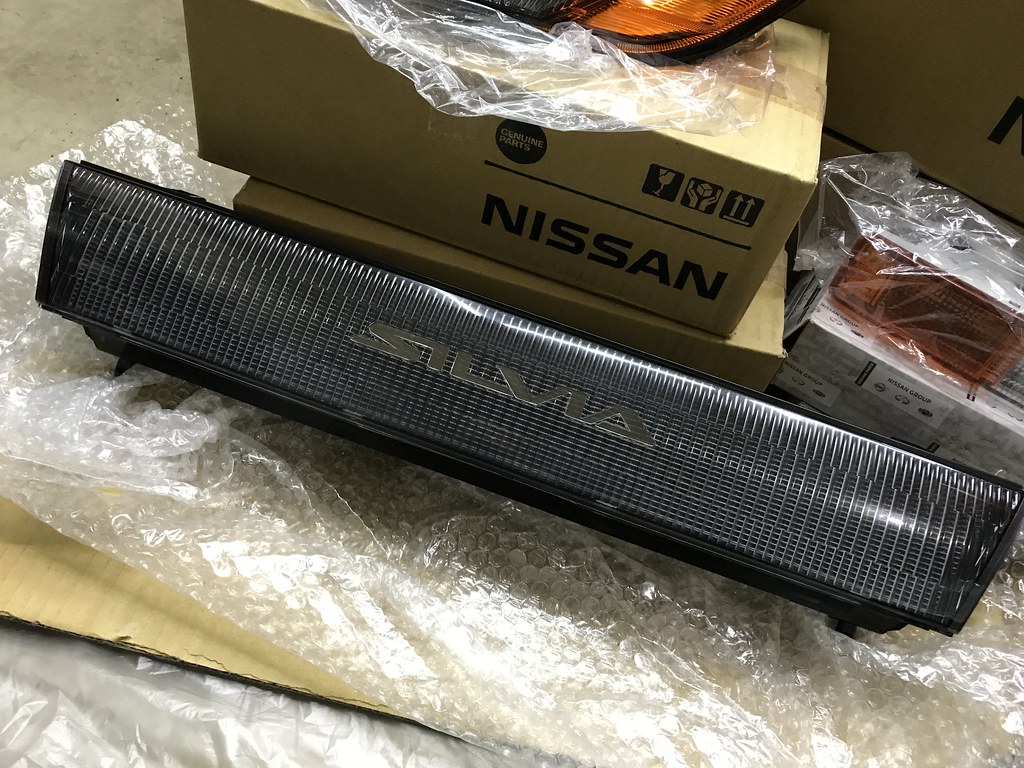 A major debate for any PS13 builder is the front grille. While most tend to opt for the GTR style grille, I have always thought the “SILVIA” center grille is a pretty cool piece. It gives the front end a really interesting and nostalgic look. I was able to buy one of these brand new from Japan as well. I’ll likely pick up some sort of GTR grille to have on hand as well as a second option, but it bothers me that it essentially needs to be a replica piece. NISMO did sell a GTR grille for the car, but they are insanely expensive and next to impossible to find. This may just be one of the rare instances where I am forced to settle for a replica part- or just run the OEM Silvia grille. 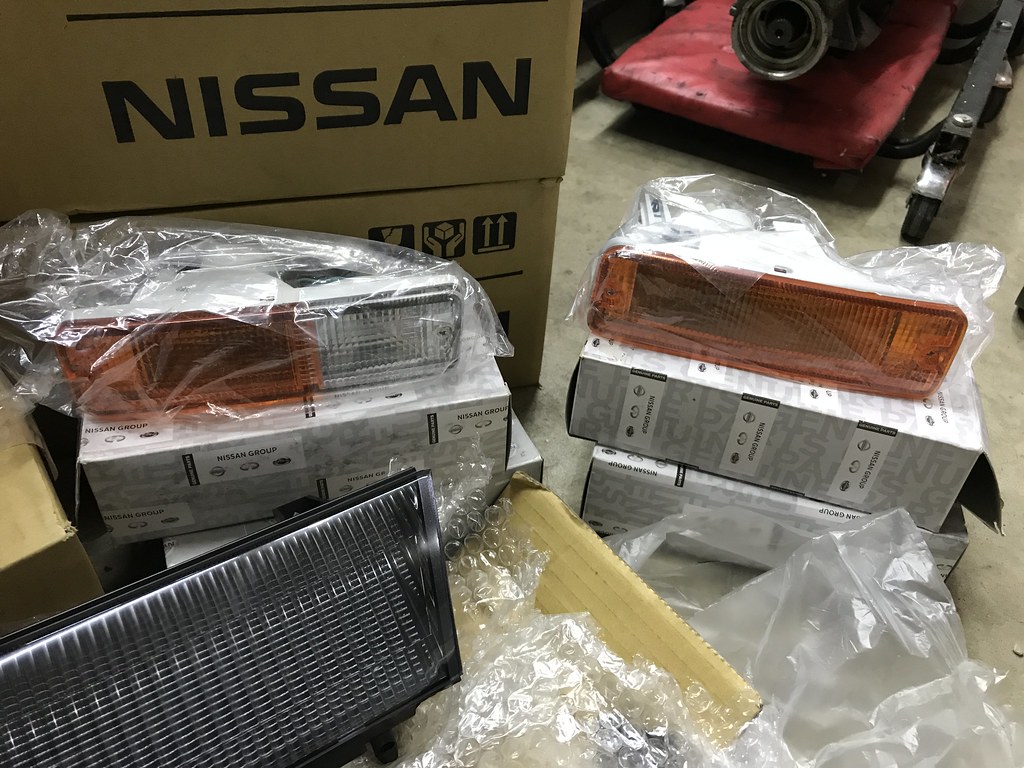 When it comes to turn signals for a PS13 front end swap, there are two popular options. The first is the pair of amber lights that come with the car from the factory. These are still readily available new and very affordable which is nice. I was able to pick up a set that was in stock here in the states from Nissan Race Shop.

The second option that arguably looks a bit cooler is the JDM 180SX zenki front turn signals. These lights are half clear and half amber and feature a running light in addition to the turn signal. I had a tough time tracking down a pair of these as one side has been discontinued by Nissan. As luck would have it, I was able to find one side in stock at a shop here in the states and the other listed on Yahoo Auctions Japan, both brand new. I saw a brand new pair of these sell for $250 on eBay a few months back so I was delighted to have a pair for much less than that. I haven’t decided yet if I will use these or not since the car did not come equipped with them from the factory, but I do favor the look of these a bit more than the standard PS13 all amber version. Tough call! It will be fun to have both on hand to try out though. 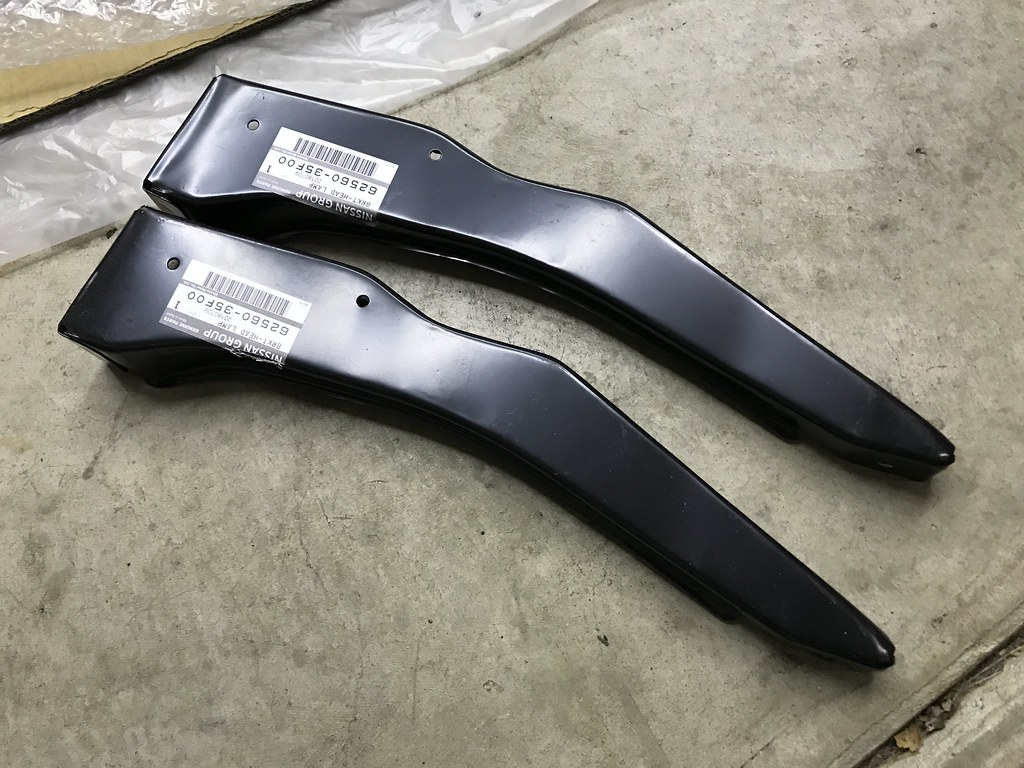 Finally, I picked up a pair of Silvia headlight brackets to install the lights properly. These are one of the few items for this front end swap that are affordable and still readily available. Oddly enough, the 240SX coupe I just parted out did not use these at all on the Silvia front that was included- the lights were held on with a couple of zip ties.

So there you have it! The beginnings of the exterior of my S13 coupe build. I have actually had the more or less complete exterior setup for the car in my garage for a month or two now, but I have been holding off on posting anything about it until I can make some more progress. I would really like to have the car at home in my garage with the items mocked up for some proper photos before I post more details related to the exterior, but time will tell when Spring arrives and I can get all of my ducks in a row. I don’t think there is much about the exterior of this car that is really going to surprise any of you anyway.

Thank you as always for stopping by- I really appreciate you allowing me to share my cars and ramblings with you. Have a great weekend!

PS- Today is the last day to order a T-Shirt before production begins. See the link on the store page to preorder. I likely won’t have any extras made or do a run of these again in the future. Thanks for the support!