Posted on September 23, 2019 by camryonbronze

While I was out last night picking up some groceries, I was reminded by the chiming low fuel light on my Pontiac Vibe (not the best daily driver by any means, but it’s relatively bulletproof, cheap, and gets me from A to B) that I needed to gas up. I proceeded to make my way from the grocery store to the gas station next door and laid eyes upon an unfamiliar sight in my town- an S13 at the pump adjacent to mine.

The car wasn’t the prettiest by any means, but they rarely are when I happen to see one on the street in Michigan. In any case, it was all one color which was a decent start. The car had some replica TE37-esque wheels, painted altezza tail lights, GTR-style over fenders in the rear with stock metal fenders up front, and some sort of FRP aero kit. Inside was the typical pair of bucket seats, a roll cage with a gutted interior, and a cracked dash. 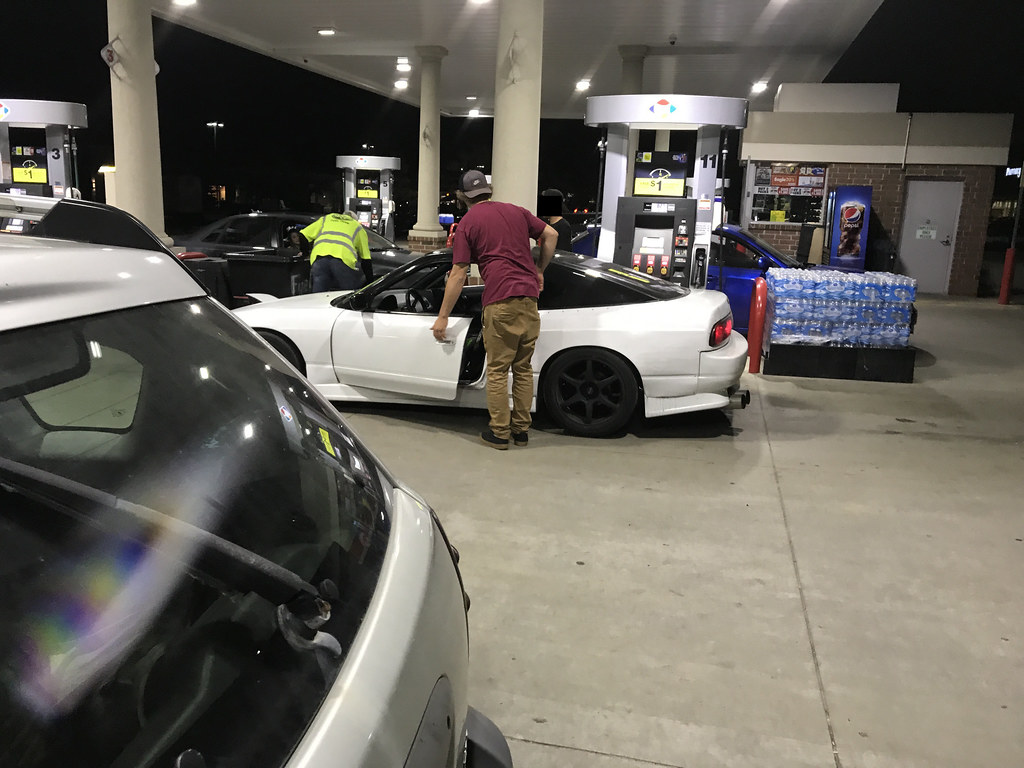 I had seen this car a few times in town over the past couple weeks, so I thought it might be nice to introduce myself to the owner and ask about the car. In hindsight I probably should have just kept my mouth shut, but I had nothing better to do while I waited for my gas tank to fill up.

The owner looked really young to me- probably 16-20 range. He was scratching off lotto tickets with his buddies. I told him he had a nice S13 and that I had a couple of them at home myself. He seemed like it was really difficult to look in my direction and felt that acknowledging my existence was a chore. I guess he was really focused on his lottery ticket. I heard his friend scoff and make a comment under his breath about my Vibe, which is totally understandable- even though he WAS facing the vehicle’s good side.

Feeling the need to redeem myself a bit, I pulled up a photo of my car from Wekfest a few months back and walked over to show it to him. After glancing at the photo, he muttered, “Ah. What’d that thing cost you?” as if I had just recently bought it and paid a fortune for it. I explained that I had owned it for 11 years, which felt a bit strange to me when I really thought about it- he was probably my oldest daughter’s age at most when I bought the car. “I don’t really care how mine looks at all,” he told me. I’m not sure if that was supposed to tell me that he liked to drift or he assumed that I don’t drift based on the photo of my car- who knows.

At this point, the news that he wasn’t going to become a millionaire (at least not that night anyway) must have broken, because he suddenly seemed slightly more interested in having an actual conversation. I asked if the car was KA powered, and he boasted that it was indeed SR swapped. When I acknowledged that my cars were as well, he seemed to downplay the power plant and explained that “when he blows it up” he would like to do a 2J swap. I asked how long he had owned the car, and he said about two months or so.

By this point I had said goodbye and gone back to my car to finish filling the tank. For whatever reason, I began to feel a bit angry about the interaction I just had. In my mind, this “kid” came off as arrogant about an S13 that was really a fairly standard sight as far as these cars go. As he and his friends drove away in their various loud vehicles with replica wheels, I found myself slipping into a mindset that I think many people in our community do these days. I immediately felt disrespected- that the “kids” are ruining the car scene. It made me wish I hadn’t said anything at all. 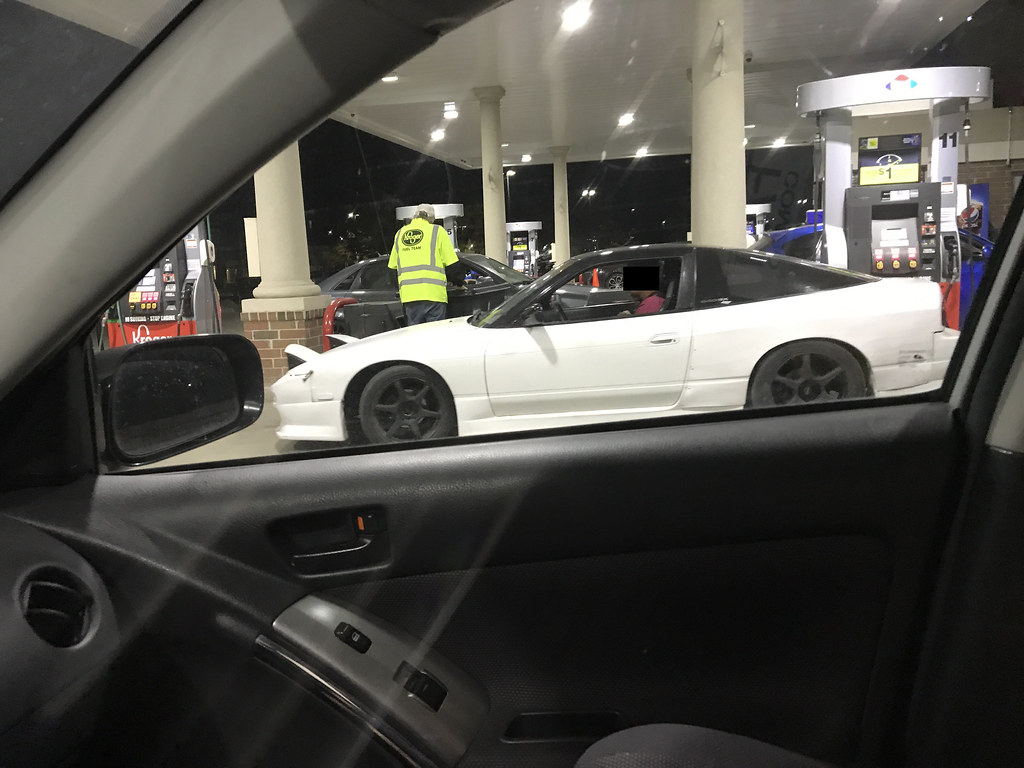 As I spent some more time thinking on the conversation I had later that night and into this morning, I realized that I was acting like a hypocrite. In all honesty, I was probably being just as arrogant to think that him and his friends should respect me for my own S13 when I was standing at the gas station in a banged up Pontiac Vibe. I’ve had these sorts of interactions in my own S13 dozens of times at gas stations over the years, and while I try to always be kind to anyone that takes the time to talk to me about the car, I am sure I have come off just as distracted or cocky myself in the past.

In thinking about the interaction further, I wondered how differently things might have gone if I were driving my own S13 when I pulled up to the gas station. Had I not sold my TEs a while back, I probably would have been as the weather was unseasonably warm for late September yesterday. I wonder if he would have said something to me rather than me starting the conversation. In all honesty, if I had driven my 240 I probably wouldn’t have said anything to him and would have waited for him to say something- kind of an arrogant thing to do, but that probably would have been my play.

What is it about building cars that makes us all develop an ego? I guess the hobby itself is sort of centered around drawing attention to yourself in a backwards sort of way. Everyone wants their car to be unique and to represent who they are. We all want to stand out and be recognized, whether we admit it or not. But I think the whole Instagram generation sort of thing goes to our heads too. I often get a few messages a week from people telling me that they read about my car online or have followed my build for years and how it influenced them in a positive way. It’s a great feeling and I always appreciate when people take the time to do that, but it can easily go to your head. We don’t always want to admit it, but it’s true.

But out in the real world, there isn’t a username and follower count floating over your head. There isn’t an endless highlight reel of photos to scroll through showcasing your latest accomplishments (without any of the setbacks along the way, mind you.) I think this is true of everyone to some extent, whether they are into cars or not. It’s so easy to judge a person based on their appearance, their clothes, their job, the car they drive, or where they live rather than by the actual conversation you are having with them.

This interaction was a great reminder for me to check myself. Don’t judge a person just based on how nice you think their car is, their age, or their appearance. You never really know what other people have experienced or what they are experiencing as you speak. Don’t blame the younger generation for “ruining the car scene” or for doing their thing. Sure, this kid could actually be a jerk for all I know, but that’s probably not the case. I know I definitely acted like an idiot when I was younger. This conversation reminded me that is important not to become jaded, arrogant, or entitled. I’ve always tried to maintain a humble attitude, but in the car scene (and life in general) it’s easy to lose sight of what’s right without even realizing it.

Anyway, I just felt like this was an important story to share. I hope it was entertaining if nothing else and maybe even makes you think a bit. Let’s continue to try to be kind and helpful to each other to continue moving our community in the right direction. We all stumble along the way, but that’s a part of accomplishing something in life. Maybe the next time you find yourself frustrated at a person or situation, you’ll step back and look at your own behavior too. This was an eye opener for me.

In any case, I hope to have an update for everyone on the status of my cars later this week. Life has been CRAZY and I’ve been distracted with parting out a couple of rusty S13s which is keeping me from getting much done with my own cars. More on that later this week…

Thanks to everyone that stops here to read this blog- I sincerely appreciate it! Have a great week.

2 Responses to A Random Encounter