Posted on November 22, 2019 by camryonbronze

This week my passion for the 180SX returned with a vengeance. It’s no secret that I have been less than hyped on my hatch over the past few months after electing to sell my silver TE37s and let the car sit for the season to focus my efforts on the S13 coupe I picked up about a year ago. A surprise medical expense meant that something had to give, and I elected to sell my wheels instead of items from the coupe build to try to keep the momentum moving. After all, this was my fourth season on the silver TEs- and while I think they look amazing on the car, that is also a long time for me to commit to a single look. Parting with them felt like the logical choice as it gave me an opportunity to try something different in the future when I had my ducks in a row- not to mention they sold very quickly. 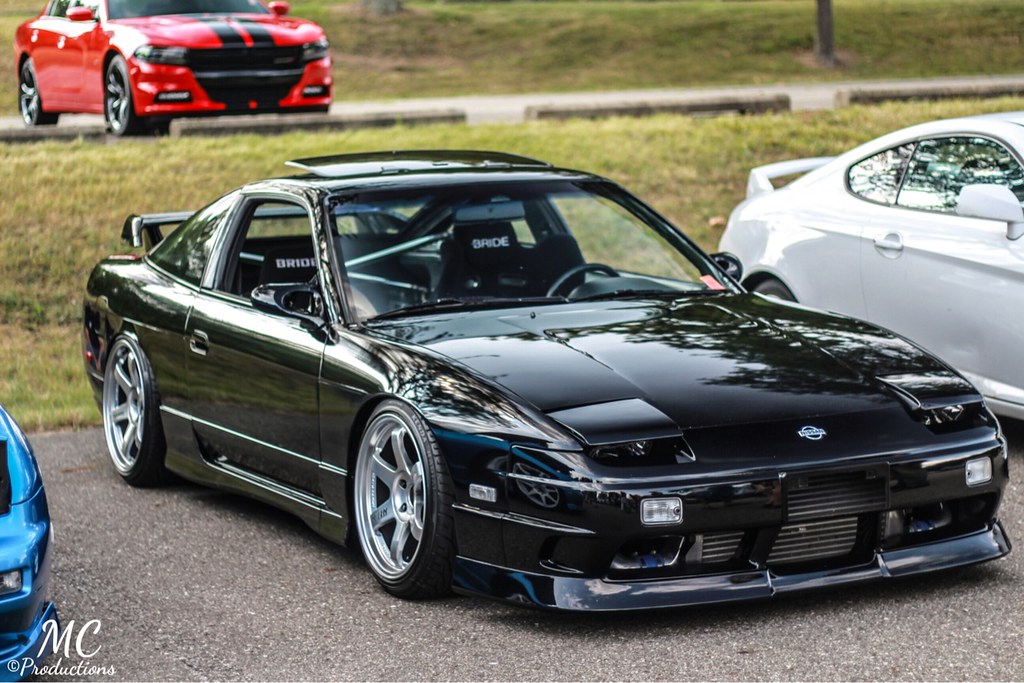 Oof. 2017 was an amazing stage- and probably the last time I feel the car
was relevant and true to my roots with the chassis.

As the hatch sat for the summer, I started to question if I should even be keeping it around. I had been tinkering with it for the last eleven years after all (save for the two year span where I famously parted it and sold the shell, only to buy it back again like an idiot…) so I thought maybe it had run its course. Perhaps the next decade was to be devoted to the coupe chassis and starting a new adventure from scratch. This dash still resides in my basement waiting for the next
set of gauges to find their way into it.

My biggest issue with the hatch has been the fact that there aren’t really any wheels out there that excite me anymore. For many years it felt like I was climbing the ladder of cool wheels, eventually owning just about every different model that I really cared to try on the car. In my eyes it doesn’t really get better than TE37s. I always struggle if bronze or silver looks better on my car, but I think bronze has the slight edge overall. The only wheels left that I really get excited about are a set of bronze 17/18 NISMO LMGT4s. Jimmy and I agree that these are probably the final frontier. They’re just expensive and very difficult to source, especially in 17/18 specs and shades of bronze between the pair that actually match. It’s not impossible, but will definitely be a long shot. 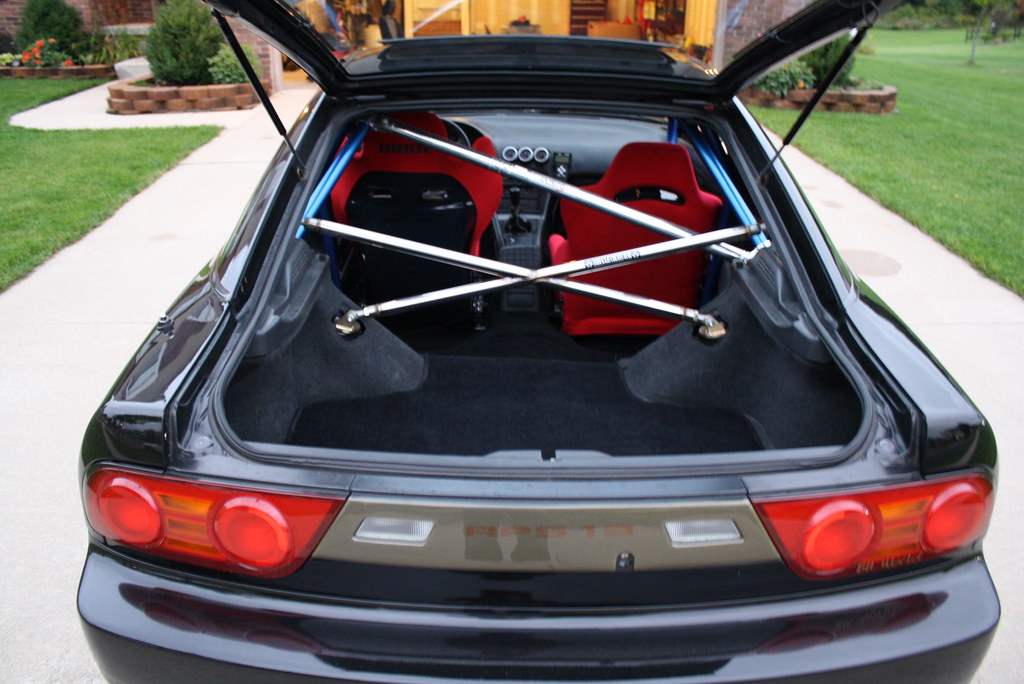 The other issue is the whole restoration angle. About two years ago, I became obsessed with the idea of restoring my S13. I started scouring Japanese schematics and new old stock overseas to try to collect tons of items in an attempt to restore the car to like-new condition. While this process can be really rewarding, it can also be a curse. I’m essentially left with a big box of OEM parts in my basement that I don’t want to install until I can afford to paint the car properly. But for some reason, instead of addressing the rust issues and getting it painted, I elected to attempt to build a second S13 (that also needs a paint job) instead. Yes, I realize that makes no sense. I don’t really have a good explanation to be honest, haha. Chalk it up to getting “lost in the sauce.” 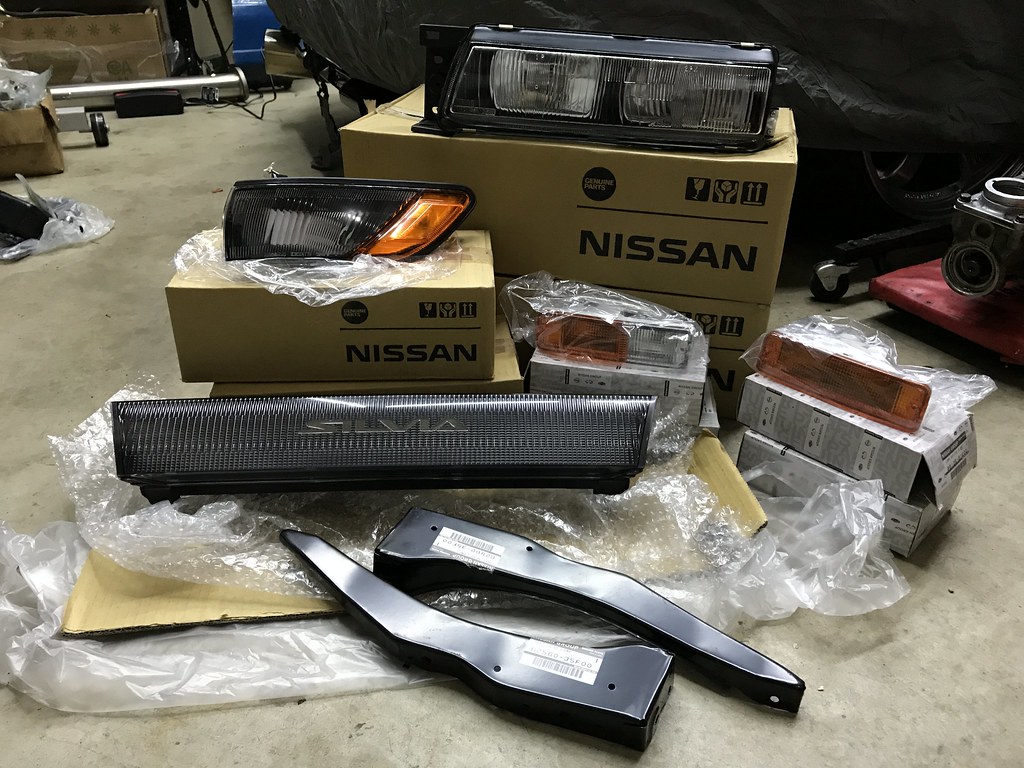 New old stock… super cool, but can I bring myself to actually use it?

Discontinued and new old stock items are really cool, don’t get me wrong. I would be lying if I said it isn’t a bit of  flex to have things BNIB items like Silvia brick headlights, 180SX quarter glass, a new S13 center console, etc. in my collection – it feels really cool. But at the same time, I have never been a hoarder. If I can’t make use of a part and it’s sitting around, I always find myself wanting to cash out on it. The other problem with these items is their value immediately decreases the second they’re removed from the packaging and bolted onto the car. It’s highly satisfying, but also a poor financial investment. I try to always have an exit plan with the money I spend on these cars. It’s not always possible with wear and maintenance items, but I am careful with the parts I purchase to ensure that I can almost always get my money back or make a profit should I change my mind. 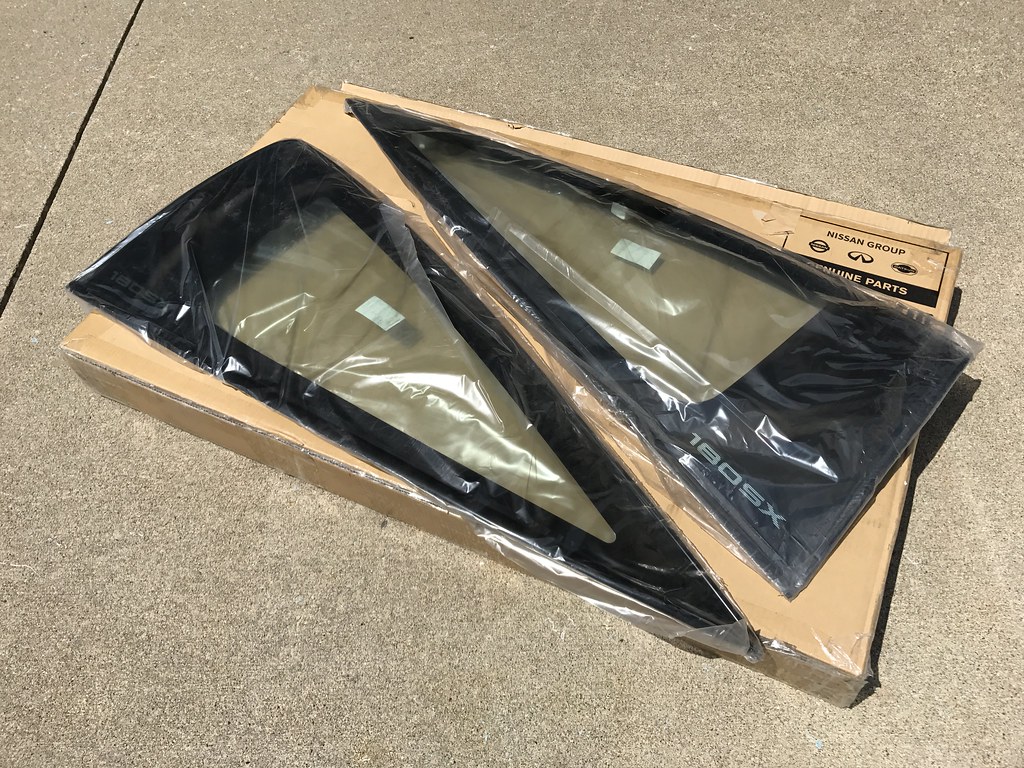 The restoration angle is picking up steam with the S13 community, and for good reason. I’m just at a point where I am having a hard time with it. Once you drop all of that coin on moldings and weather stripping, you install them and forget all about it. 9 out of 10 people will never even notice the difference. And not that building a car is about being noticed by others, but I would imagine that most of you are in a similar situation to mine where every dollar counts. Does it make sense to spend the money on these restoration items when the car doesn’t even have paint, coilovers, or nice wheels yet? It’s something I have really struggled with lately as I would love to have those items for the coupe before they are inevitably discontinued. 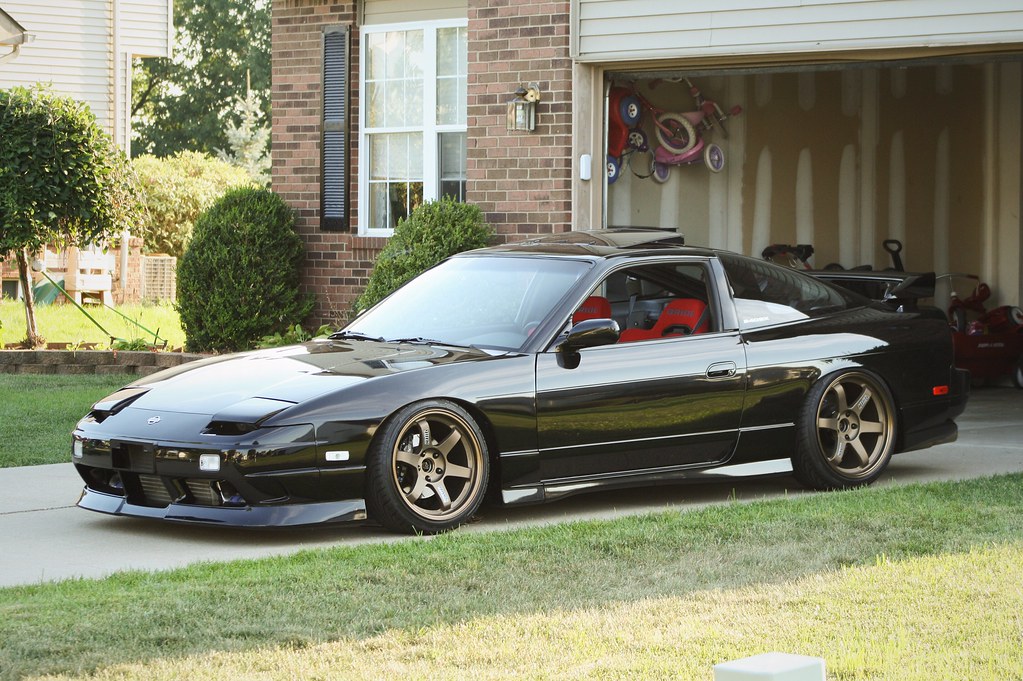 I think this was one of the best stages for the car. Summer 2016.

To be totally honest, I really miss having cool parts on my hatch. I don’t think I would ever shift away from OEM aero parts, but I miss the bread and butter modifications that make this chassis so cool- Ganador Super Aero mirrors, R33 GTR N1 ducts, Koguchi Power bonnet, Defi Link Meter II gauges, Bride seats, and the NeXt Miracle cross bar. I’ve owned all of these parts in the past (some of them multiple times,) but ultimately let go of them in my pursuit of restoring the aging chassis and eventually building up a second S13 chassis. 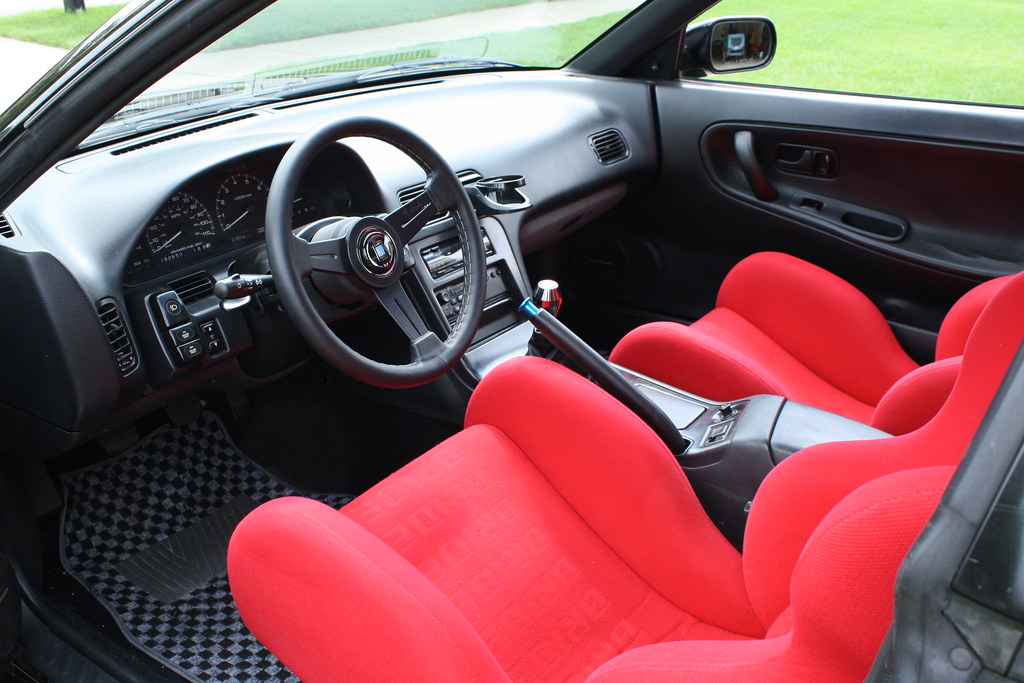 I find myself once again at a crossroads. I still love the thought of building and completing the coupe, but suddenly I miss the simplicity of the past. Focusing on only one car has always been my MO, and I’ve always discourage others from trying to build two or more cars at once. While parting out a few cars this summer helped with the financial undertaking of building and maintaining a second car, there’s still a lot of work ahead of me. The question now is which route I want to pursue- trying to exercise patience with a couple of mediocre cars sitting in the garage as time passes by, or parting with one to kick start the other and produce a nicer product in the end. 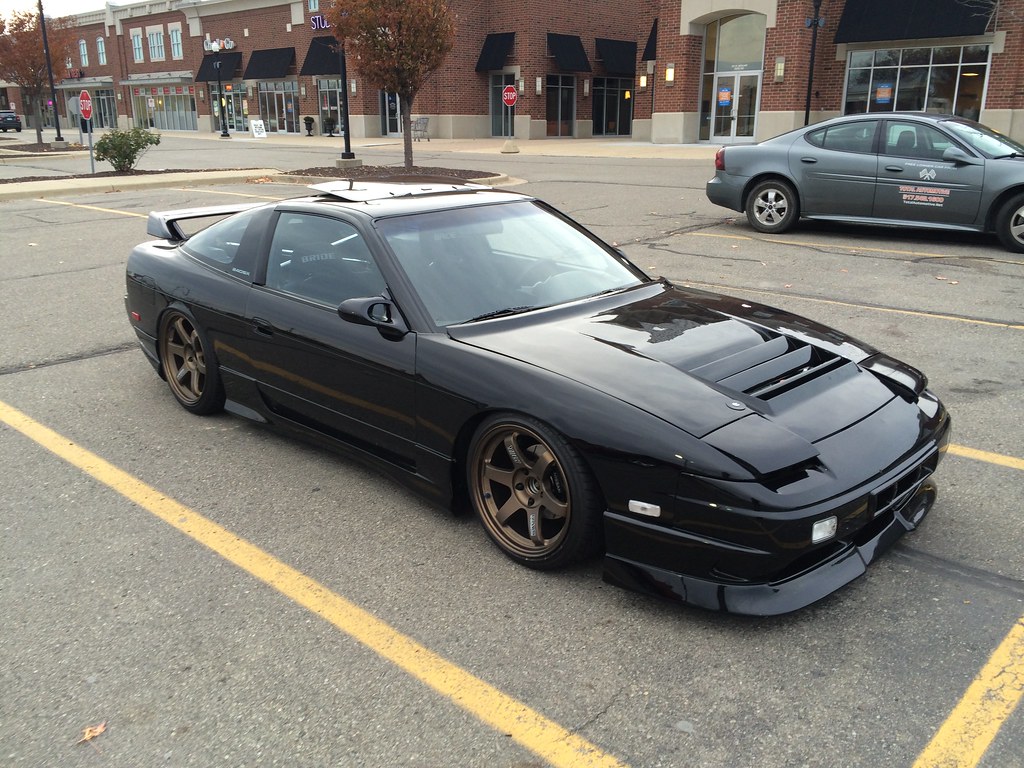 This week I elected to remove all of the “branding” from my Instagram account and take down all of the stories of parts I had for sale. I believe it was about a year ago that I decided to try to take Instagram and this blog a bit more seriously, which I don’t think was necessarily a bad thing- but lately I’ve had a desire to get back to my roots and remove myself from all of that noise a bit. Trying to make my interactions on the web more serious than they really are can result in an added pressure to create and share content, which really is not necessary since this isn’t my job. I think removing myself a bit from that mentality will be a good thing. This is something I do purely for enjoyment and that’s what makes it successful. Taking it too seriously can result in sub-par results. 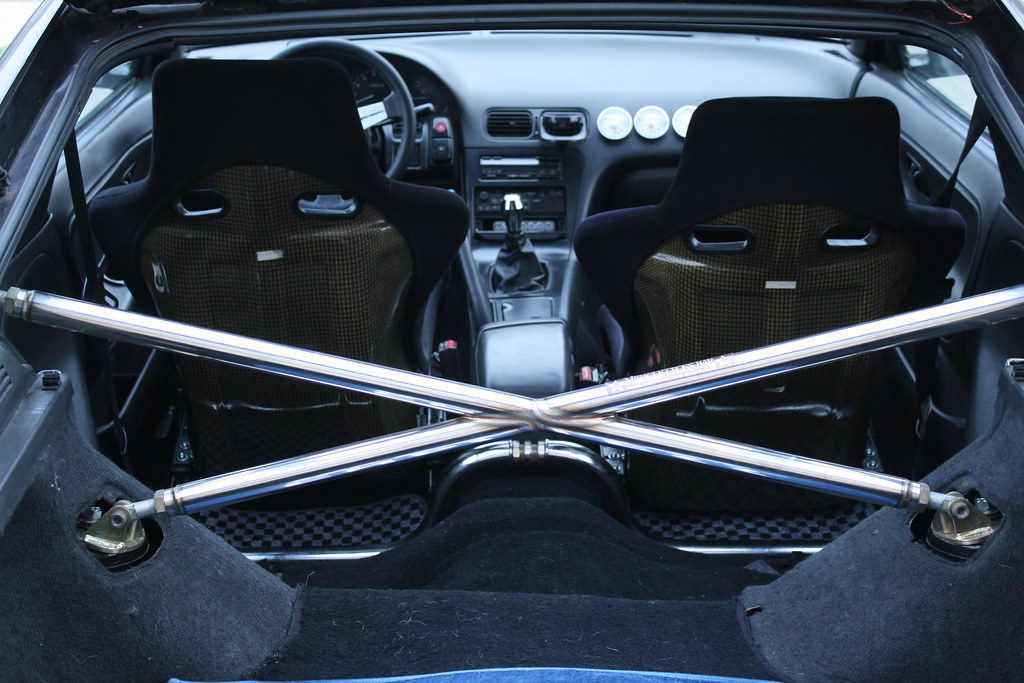 All this to say I am basically just transcribing my thoughts onto a digital screen. Nothing is set in stone and things can change in a matter of hours, as I’m sure you can probably relate to. But this week has definitely been all about the idea of modifying the hatch and returning it to its former glory. Plus, it has been a while since I wrote a good old fashioned pointless ramble on the blog. I guess we’ll just have to see what happens.

I hope you have a great weekend! Take care.

6 Responses to Bound to Happen