Posted on November 18, 2019 by camryonbronze

Here we are again- the blog has been neglected for the last month. But it isn’t due to a lack of inactivity! I’ll try to pick up where I last left off in October. About three weeks ago, I took a trip down to Houston, Texas visit my BFF Jimmy and a slew of other great people. Spirit always offers the same Friday morning to Sunday evening flights down there and they are always very affordable, so this is typically my go-to choice for a short guys weekend away when I get the opportunity. 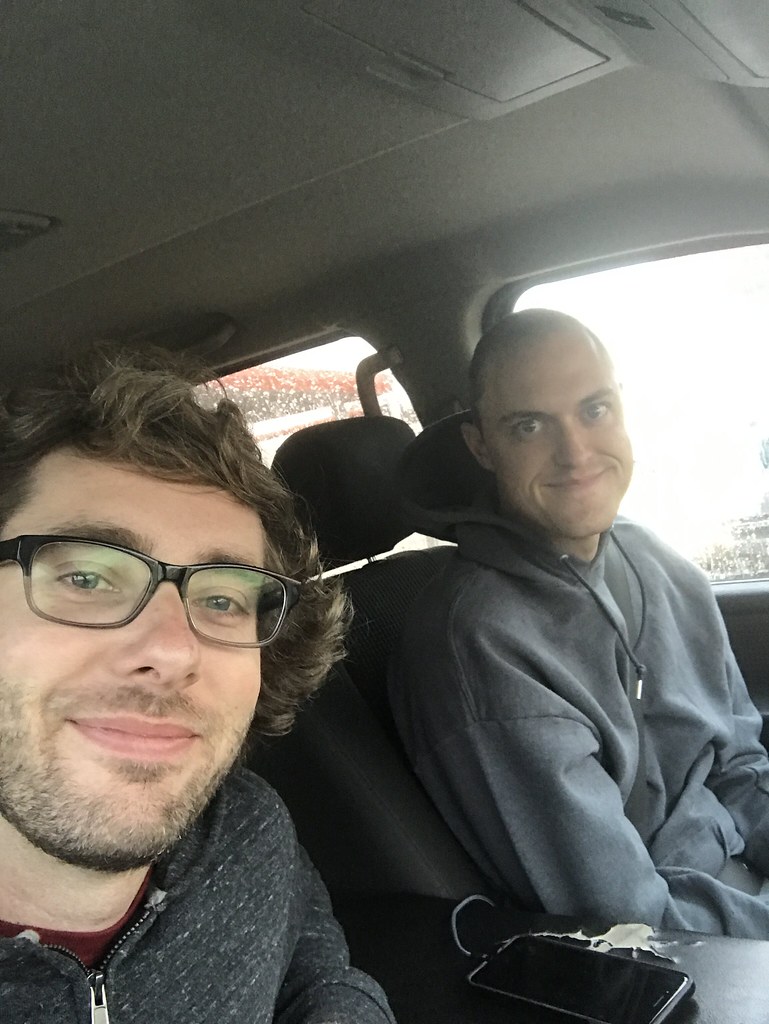 We had a lot of fun going out to eat, dinking around with cars, and hanging with friends. One of the main reasons I was excited to visit is that Jimmy and I have been chatting about his return to the S13 chassis for the last five months or so. He had been gathering parts and a couple different chassis options during that time but had decided to keep a low profile and not really tell anyone about it. By the time I arrived he had most of the pieces collected, so we worked on installing everything and mocking the car up to take a look at what he had created. 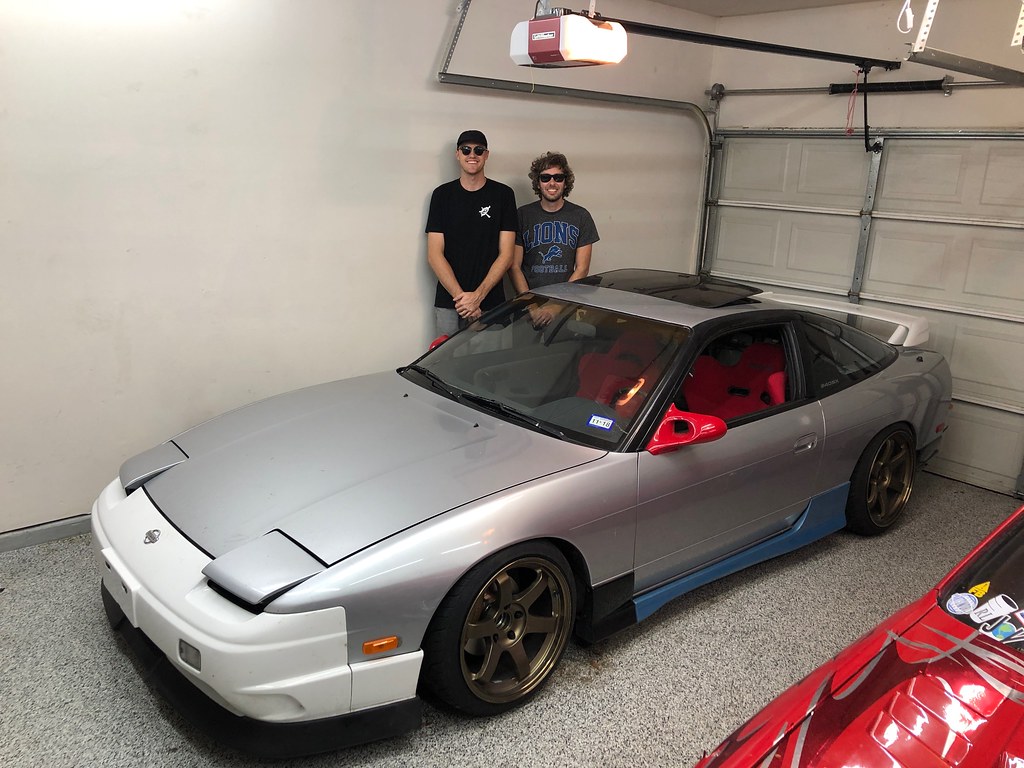 I ended up tackling tucking the front driver’s side chassis harness and installing some of the aero. We kind of just did it quickly to get an idea of what the car will look like since it will all need to be taken apart anyway for paint soon. If you know me, you know that I love photos of in-progress S13 projects- so I was pretty geeked to help sit the car on the ground and take a look at what Jimmy had pieced together. It was a satisfying feeling and I am glad Jimmy allowed me to be a part of it. Harris and Kev were also a huge help that weekend. We got to surprise Kev by having him walk into the garage and see the car for the first time which was also really entertaining. 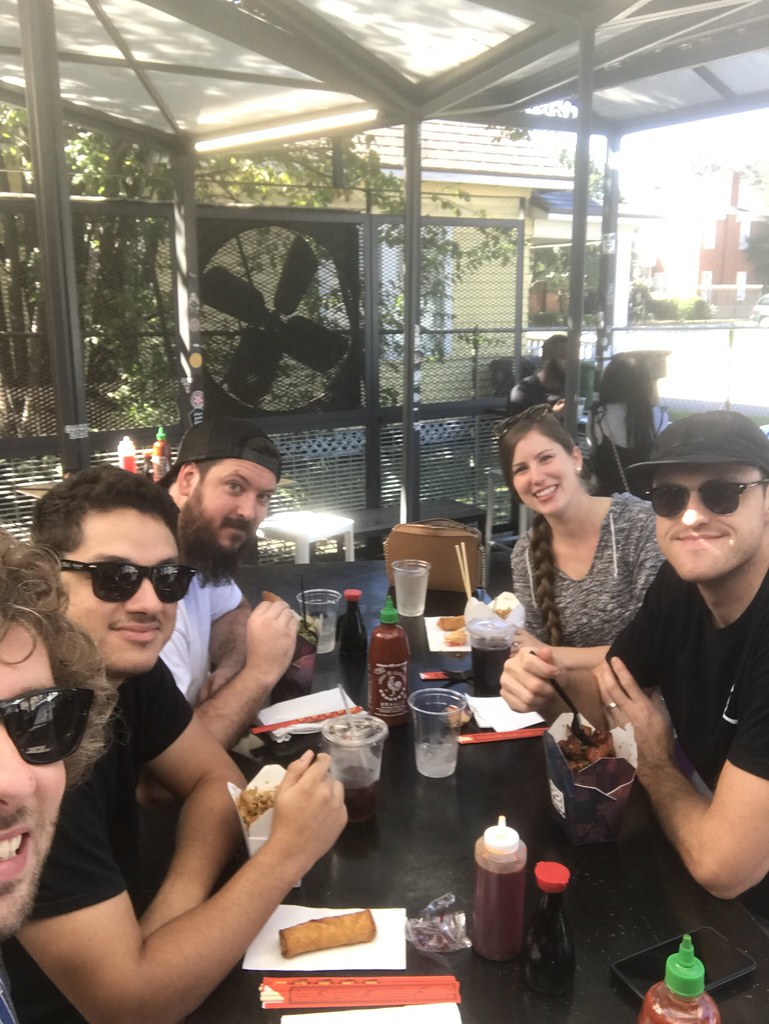 Another cool stop on the trip was visiting Josh and Michael from Fat Cats at their BMW service shop EMG. While we were hanging out, the legendary Andrew came by on the way home from picking up his freshly swapped 1JZ IS300. Andrew has been wanting to swap to a turbo power plant for many years, so it was super cool to be a part of seeing him drive it for the first time. The car now sounds as amazing as it looks! 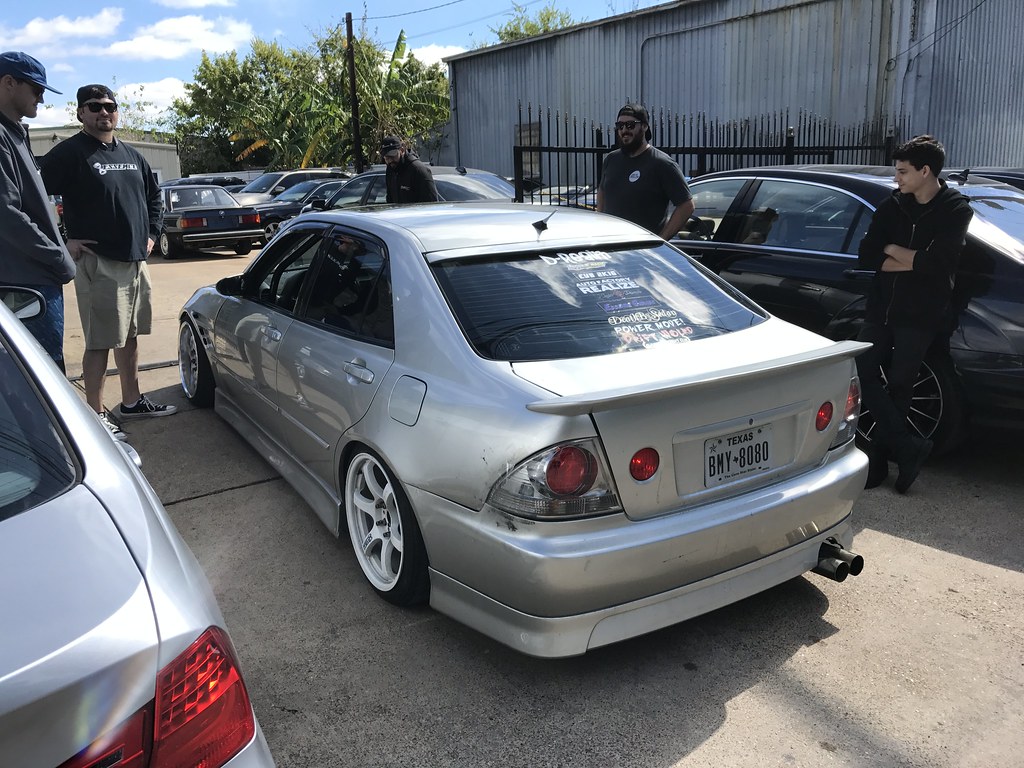 After arriving back home, I wrapped up the month of October by celebrating Halloween with my kids and getting rid of as many parts from the parts cars as I possibly could. In the last week or so I managed to sell all three KA engines I had sitting around which really freed up a lot of space in the garage. I now have both cars in the garage and on jack stands for the winter which is a great feeling. With the part outs more or less finished and everything tucked into the garage, it was time to start ordering parts and getting back to work on the coupe project.

The goal I have set for this project is to have the car running and moving under its own power by spring with a fully assembled black interior. While it feels like this is a fairly modest goal, things always tend to take a lot longer than you expect them to. That being said, I feel it is a pretty realistic goal to work towards and I am pretty motivated to make it happen.

I started by ordering a small quantity of Dynamat since it was available with fast shipping on Amazon Prime. I will need more than this to do the entire car and have since ordered more, but this was just to get me by and allow me to make some progress on the car while my wife was out of town a couple weeks ago. I started by adding sound deadening to the passenger side firewall so that I could then install the HVAC setup. After getting both of those items in place, I reinstalled the dash bar and steering column. I also started situating the body harness and getting things connected.

In the mean time, I ordered a few items that have been on my list to meet my goals for the spring. The first was a generic hot pipe and a TRUST intercooler kit- the same ones I am running on my hatch. I was glad to find the intercooler in stock from a vendor in the US as it was backordered for a couple months in Japan. 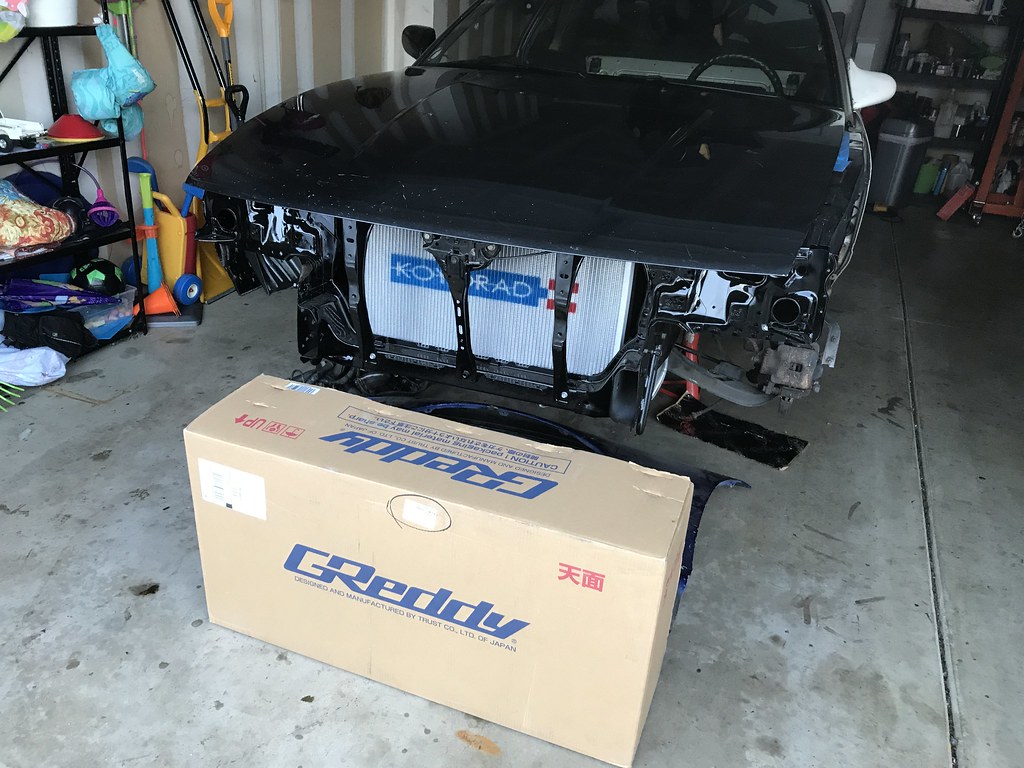 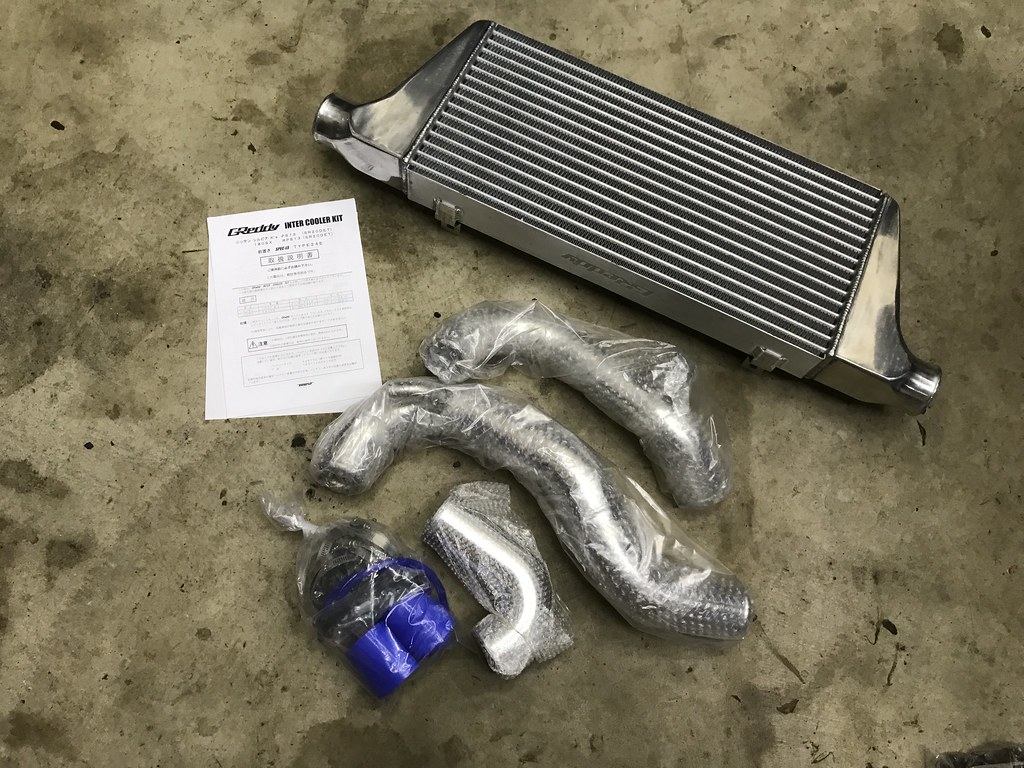 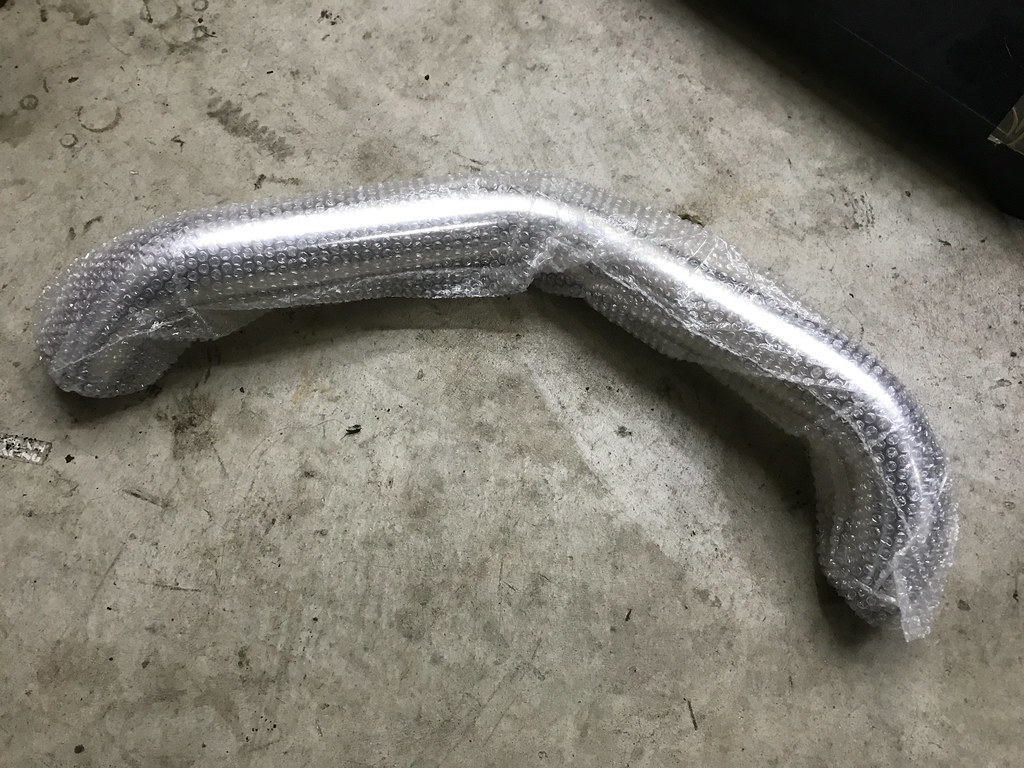 I installed the core quickly the other night just to get a look at it but haven’t had a chance to install the rest of the piping yet. Still lots of work to do in the engine bay so I’m sure that will happen sometime soon. 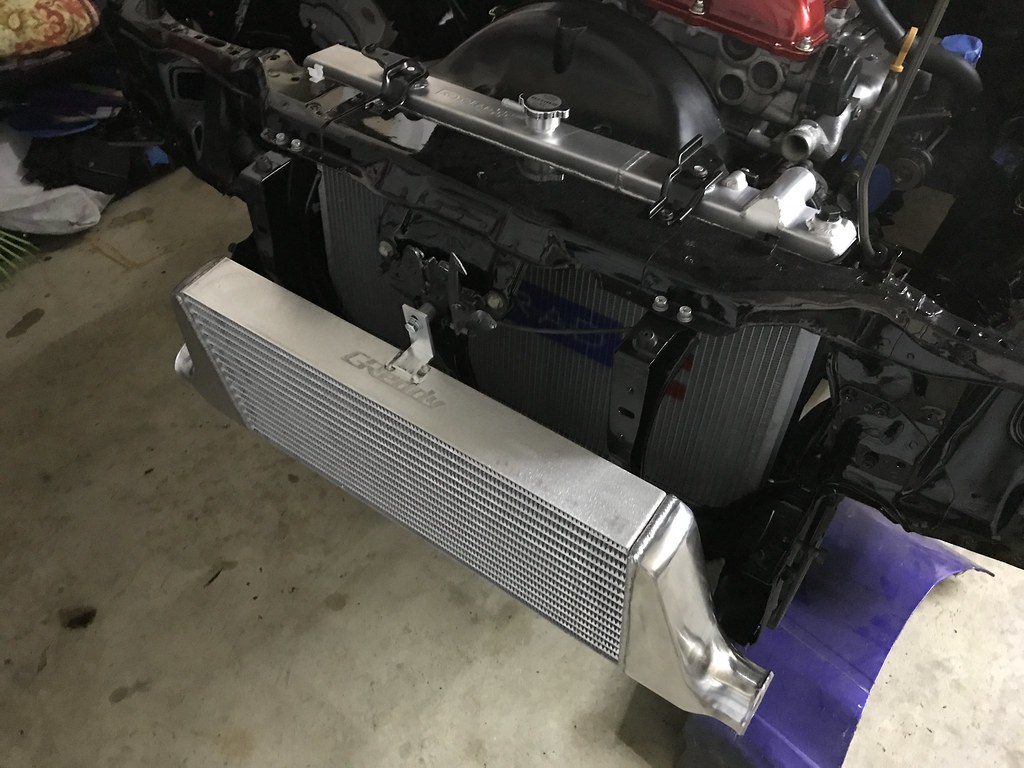 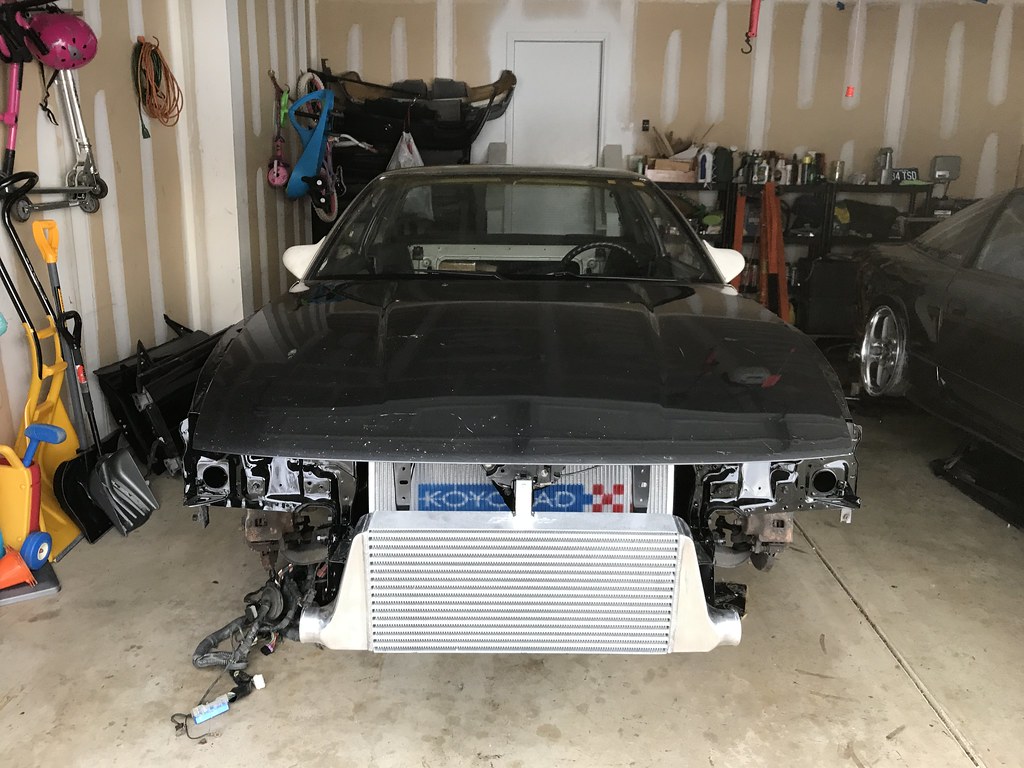 I also picked up a K&N filter and some redline gear oil for the transmission. I would prefer to have a cooler intake system, but it’s tough to beat the cost and convenience of the K&N. Perhaps I will look into something better at some point, but this will get the car on the road and running in the mean time. 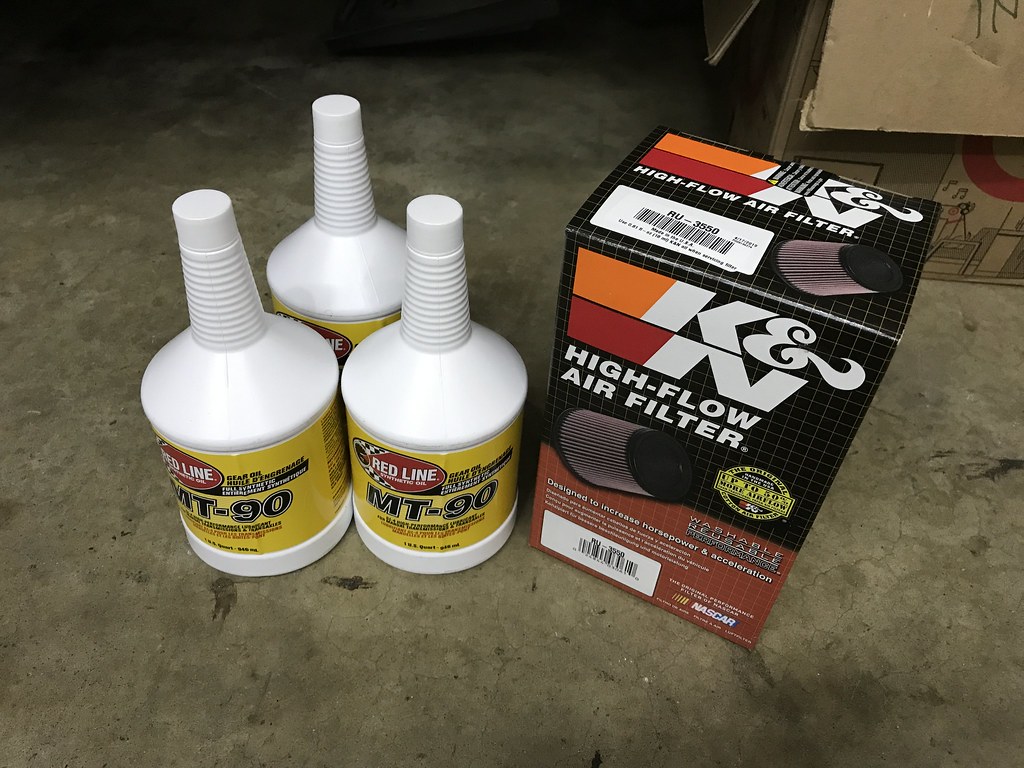 Last night was the first time I had worked on the car in about two weeks. I started by installing the manual driveshaft. Since the previous owner had removed the auto driveshaft before I bought the car, I also sourced new nuts and bolts from Nissan. The washers were discontinued, so I kept a set of those from one of the cars that I had parted out. It was tough for me to bolt the driveshaft up to the filthy rear differential, but I am trying to complete the car in phases. I want to be able to drive it a bit on stock suspension to work out any bugs and save up some funds before I tackle completely refreshing the rear subframe and suspension, so this will be fine for the time being. 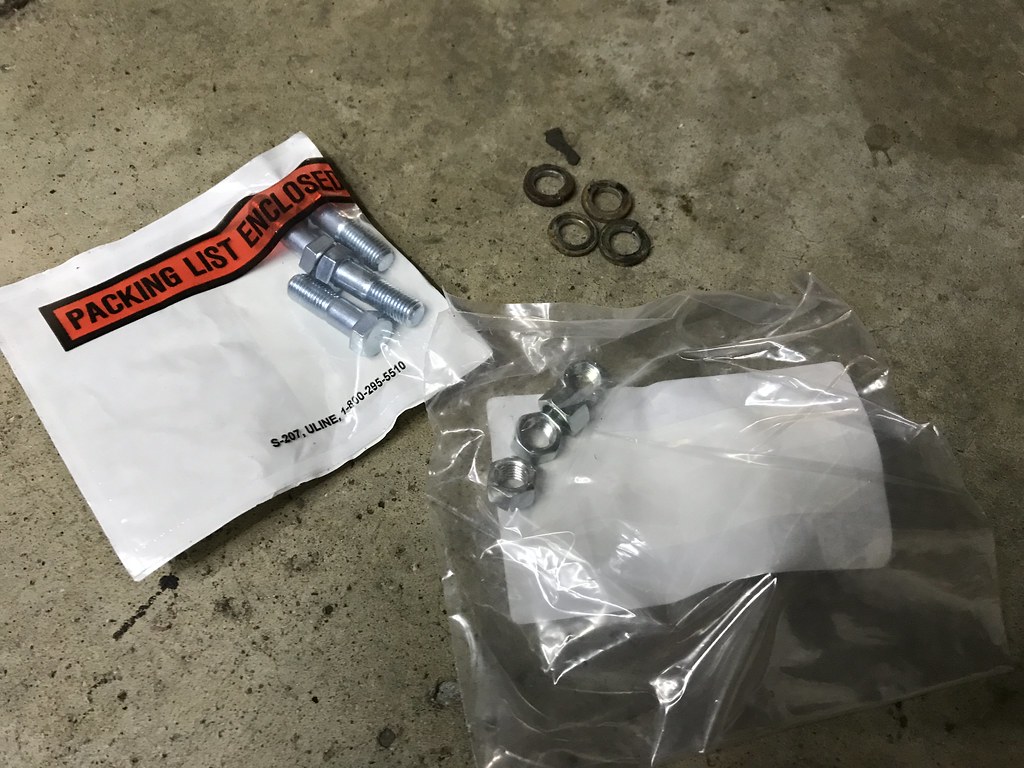 After the driveshaft was installed, I put the transmission fluid in and installed the stock shifter assembly I sourced to replace the ISR one that originally came with my swap. I also added a fresh rubber boot before bolting everything into place, topping it off with a NISMO GT knob just like the one in my hatch. 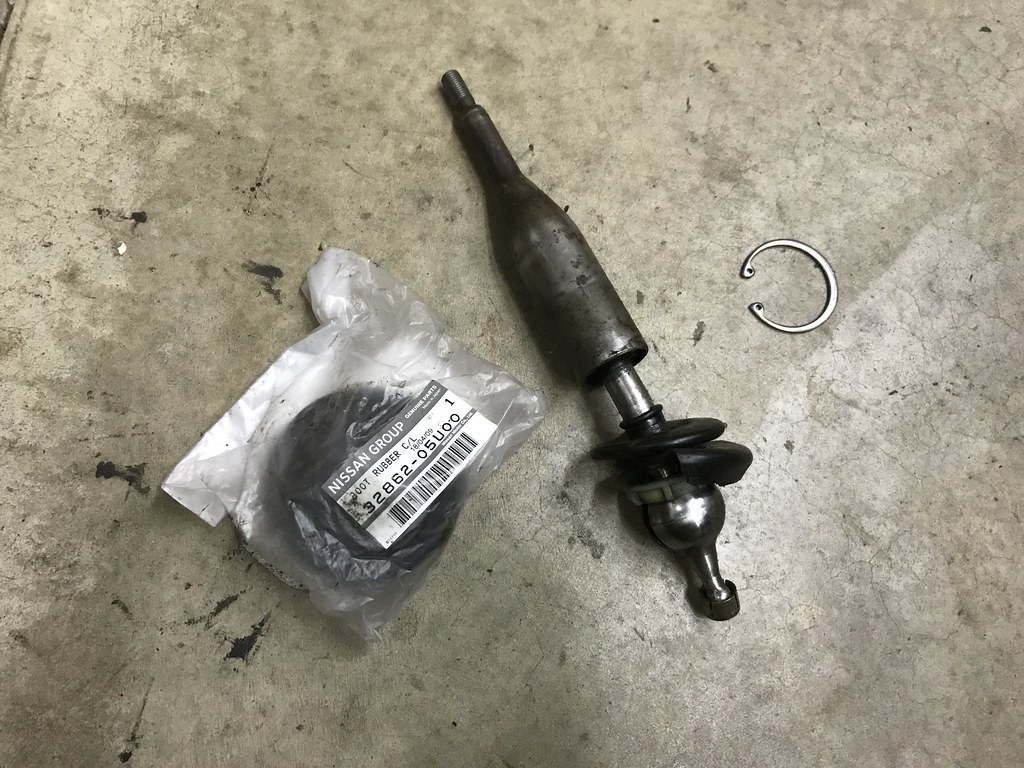 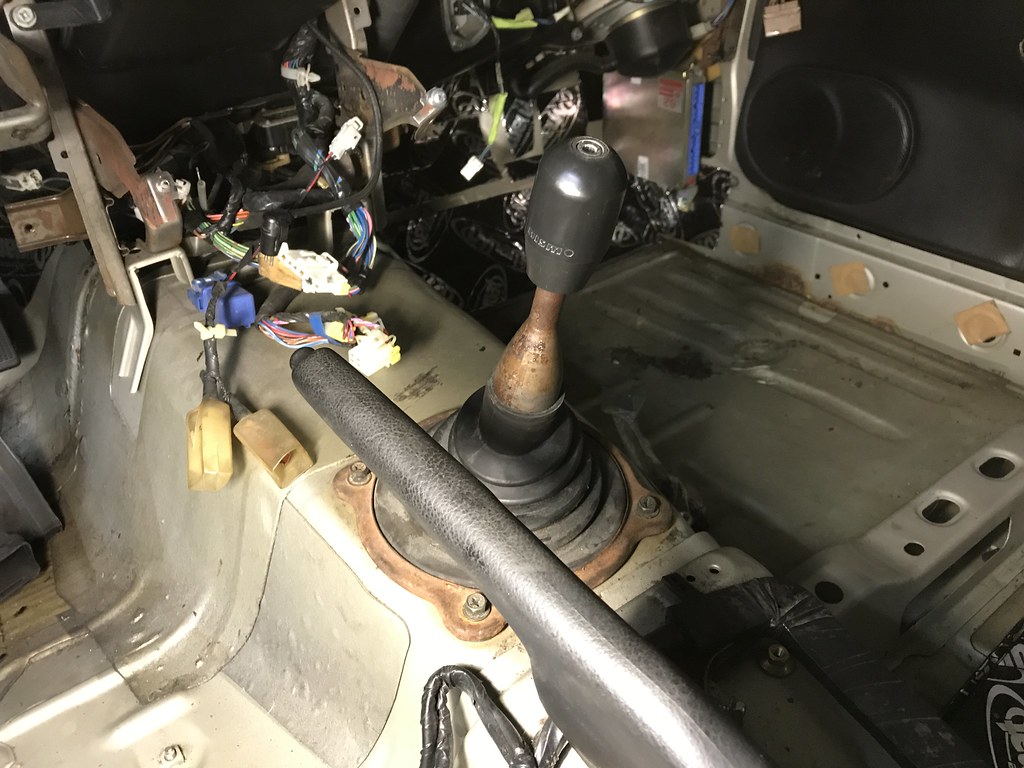 First time this car has seen a manual transmission!

An order arrived yesterday from TF Works in Chicago- GK Tech coolant overflow tank, Circuit Sports poly exhaust hanger bushings, and a Walbro 255 lph fuel pump with install kit. Everything in me wanted to purchase an OEM Nissan coolant overflow tank, but I just couldn’t stomach the cost for a plastic tank. This one looks nearly identical and should get the job done just fine. Shoutout to TF Nick for the stickers! 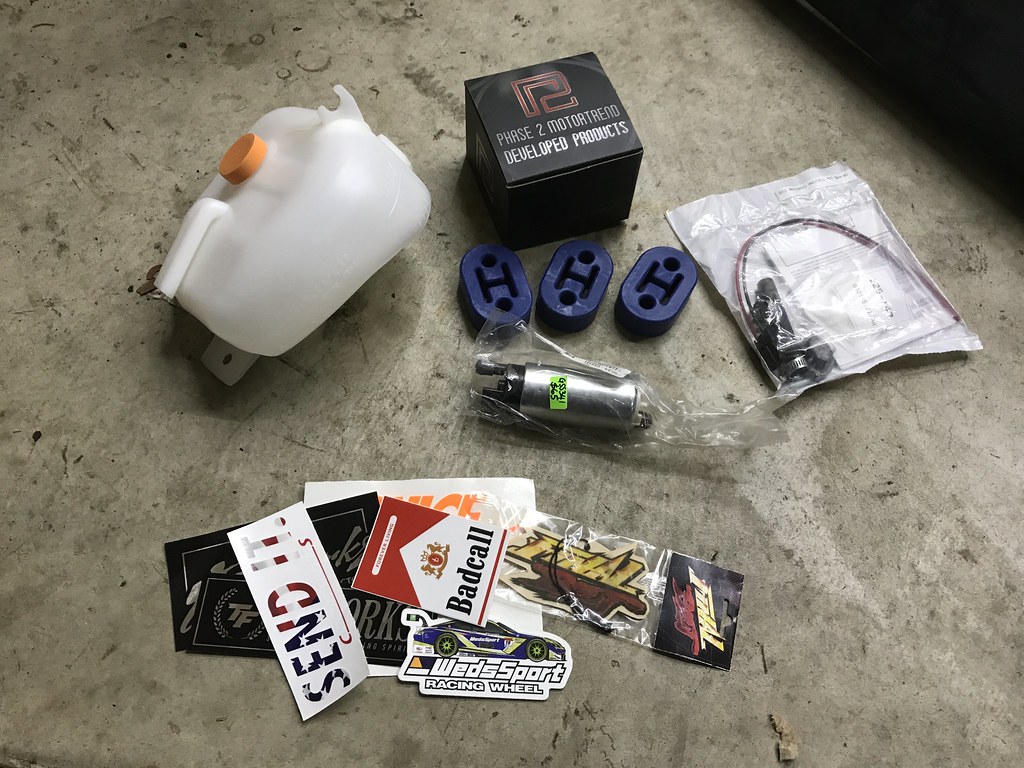 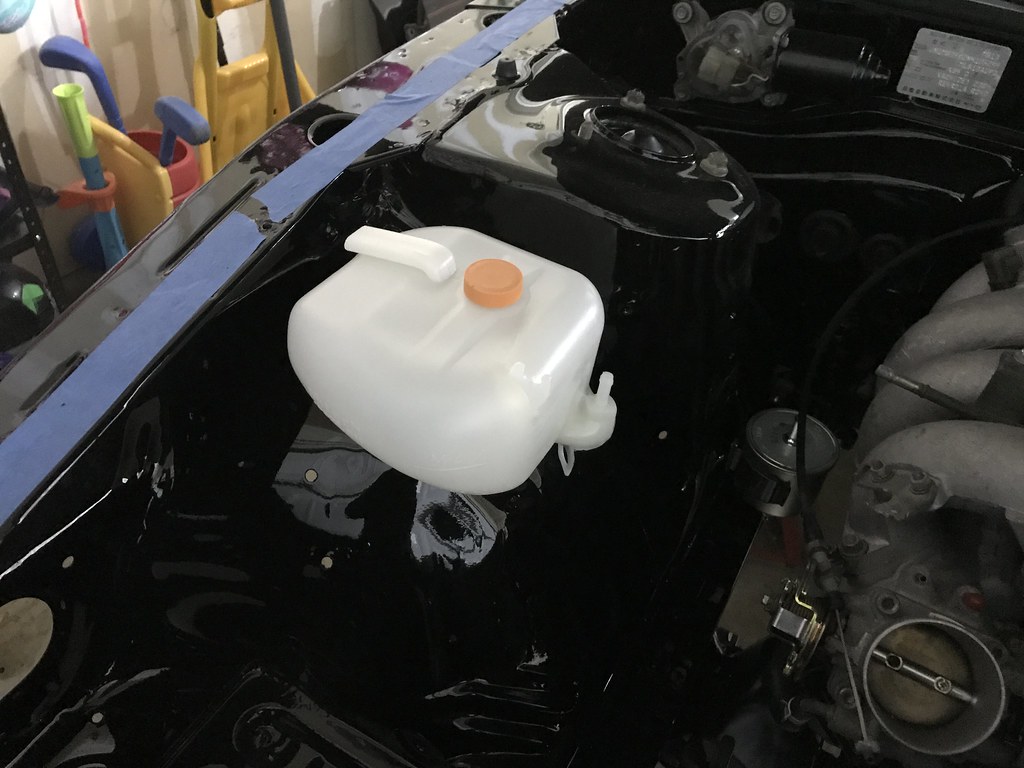 As for the Walbro pump, I have heard of a few people having issues with them as of late. These used to be the go-to when I got into S13s, and I have never had a problem with them- so I decided to keep it going. I managed to install the pump last night with a fresh o-ring, but I need to finish replacing all of the rubber fuel lines from the tank to the engine and back. 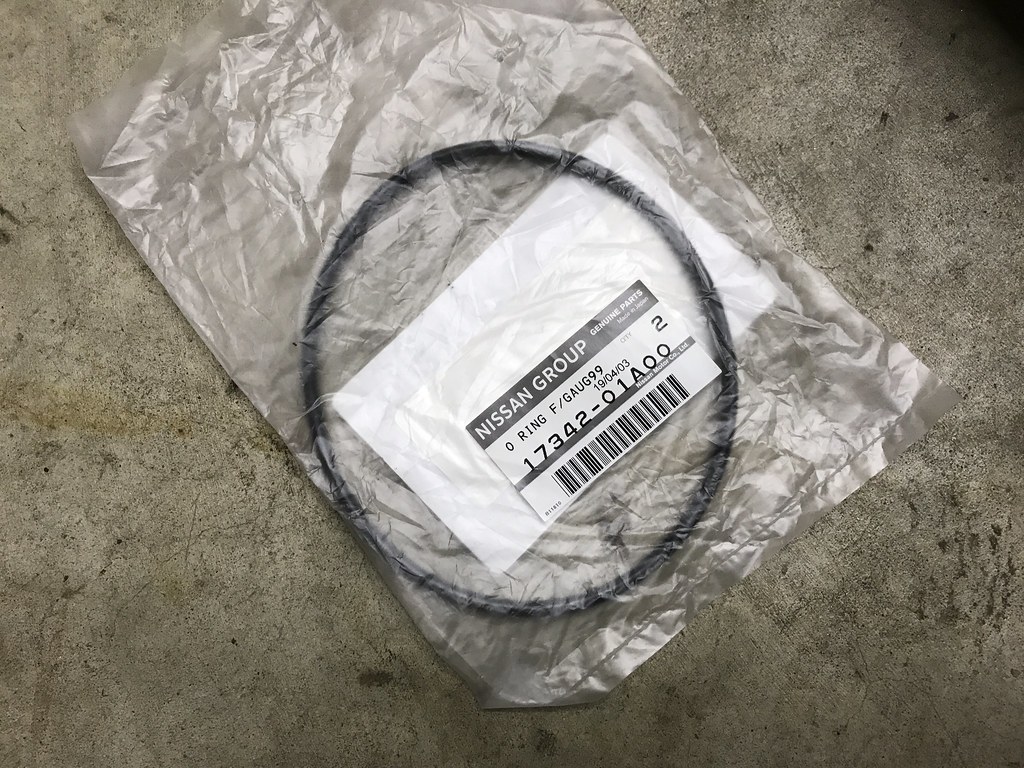 Finally, one small interior item I picked up is a new mirror block off plate for the mirror switch location on the center console. The console that came with the car is missing this piece, so I picked up a new one like I did with my hatch. You may have noticed I also installed a pair of Aero Marker side mirrors I got from a friend a couple months back. I am sure I will switch off between these and stock mirrors, but they look pretty cool on the car in the mean time. 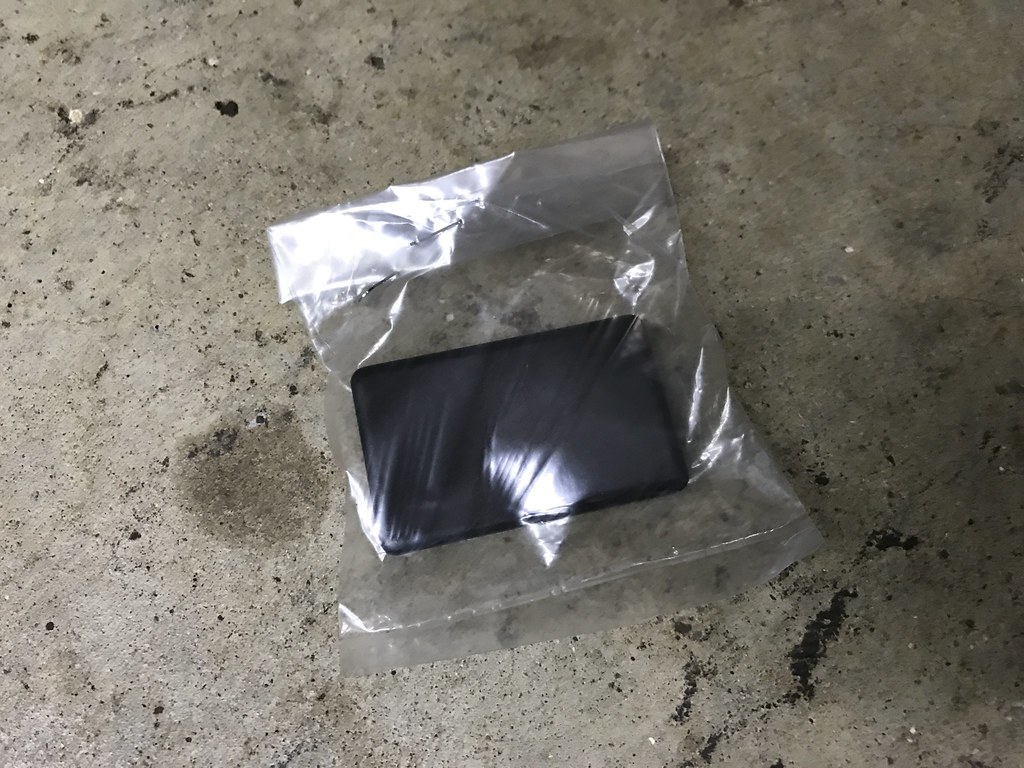 As for the hatch, not much is really going on currently. I have been using it as a reference for installing various items on the coupe which is really nice to help me remember how things should be installed. I ended up just keeping the car in my garage with the coupe for the winter- which arrived with 8.5″ of snow this past Monday despite the fact that it is technically still fall. The daily drivers are currently outside in the elements, but I have been trying to do a good job of keeping them clear of snow and warmed up should my wife need to drive anywhere. We’ll see if that lasts all winter, haha. 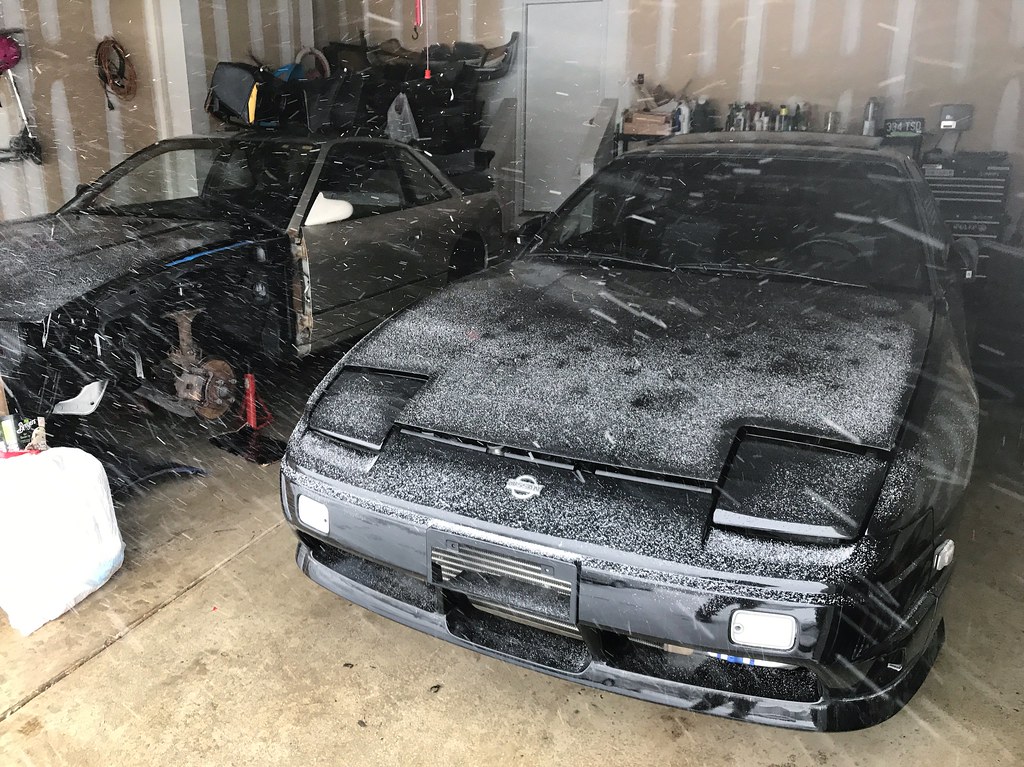 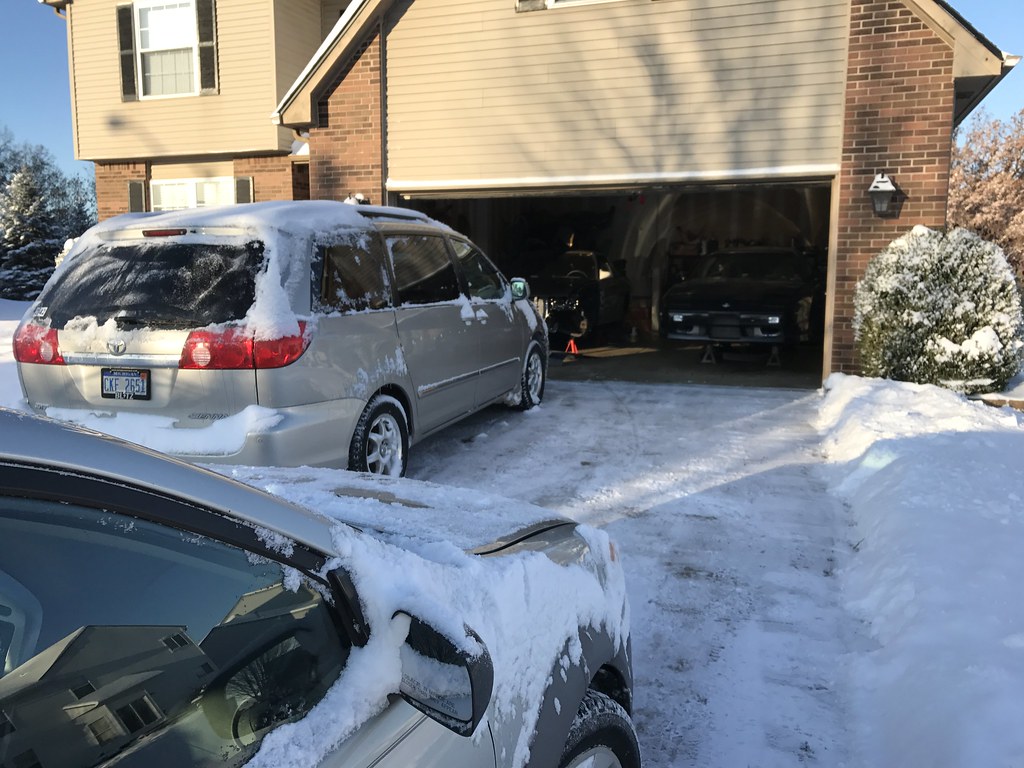 I ended up getting a message from someone in California on Instagram that offered to sell me a brand new OEM kouki 180SX front lip for a pretty solid price. I already had an OEM lip, but I have always thought it would be cool to own a brand new one ever since I went kouki aero in 2010. I ended up buying it and selling mine, so I will eventually need to get that painted and installed. Probably pretty pointless, but I thought it would be cool and decided to go for it. 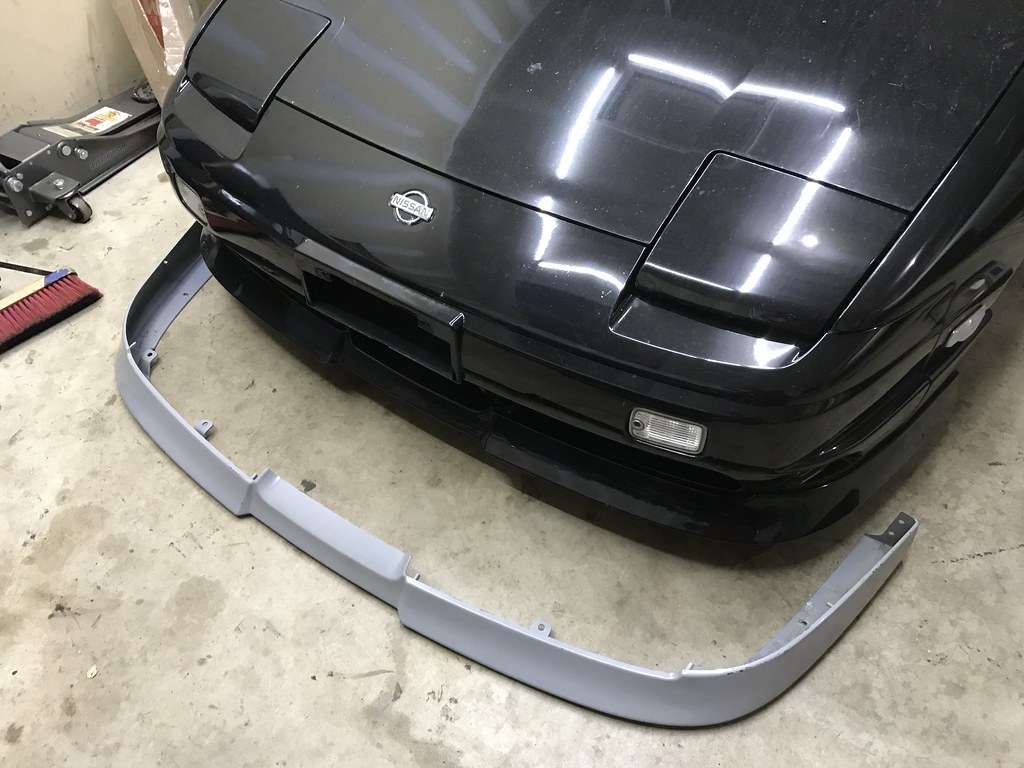 A set of AVS Model V popped up for sale in Wisconsin, so I decided to pick those up for the car for next season. They’re powdercoated silver and are 17×9/18×9 +35. I’ll need to run some spacers, but I think they could look pretty cool. The wheels are currently with a friend in Wisconsin, so I am not sure when I will get a hold of them. I could end up selling them, but I haven’t decided what the play is just yet. I would definitely like to be able to drive this thing a lot more than I did during 2019 next year, so I’ll likely end up using them. 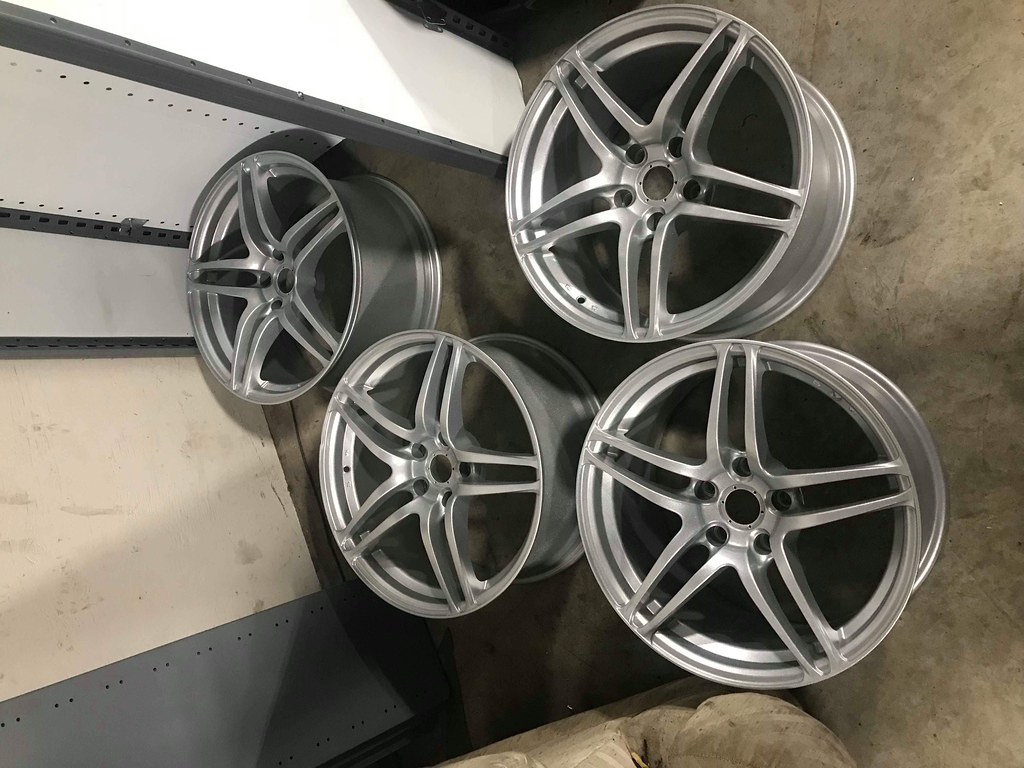 Speaking of other people’s wheels, I have a set of 17/18 Blitz 03 sitting on the car at the moment. Joe and Martino of REACT came down from Toronto and brought these to me a couple weekends ago since Jimmy is buying them from Joe. I am going to ship them down to Jimmy in Houston, but had to toss them on the car to check it out first before I did that. Gotta say, they definitely look pretty cool! 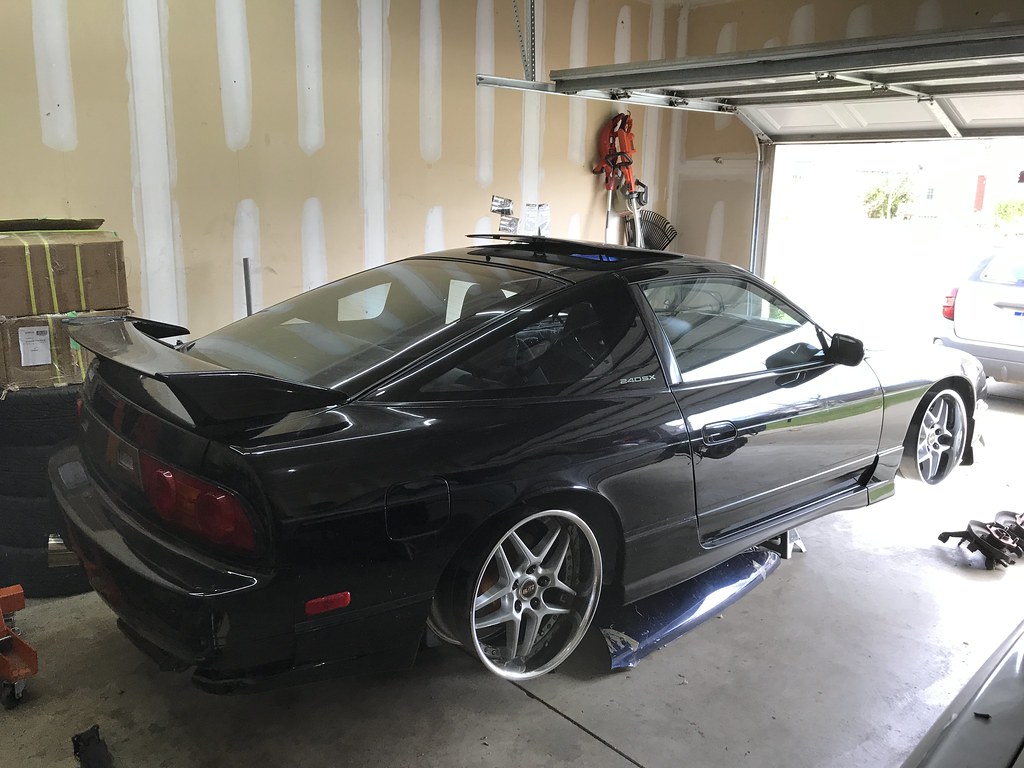 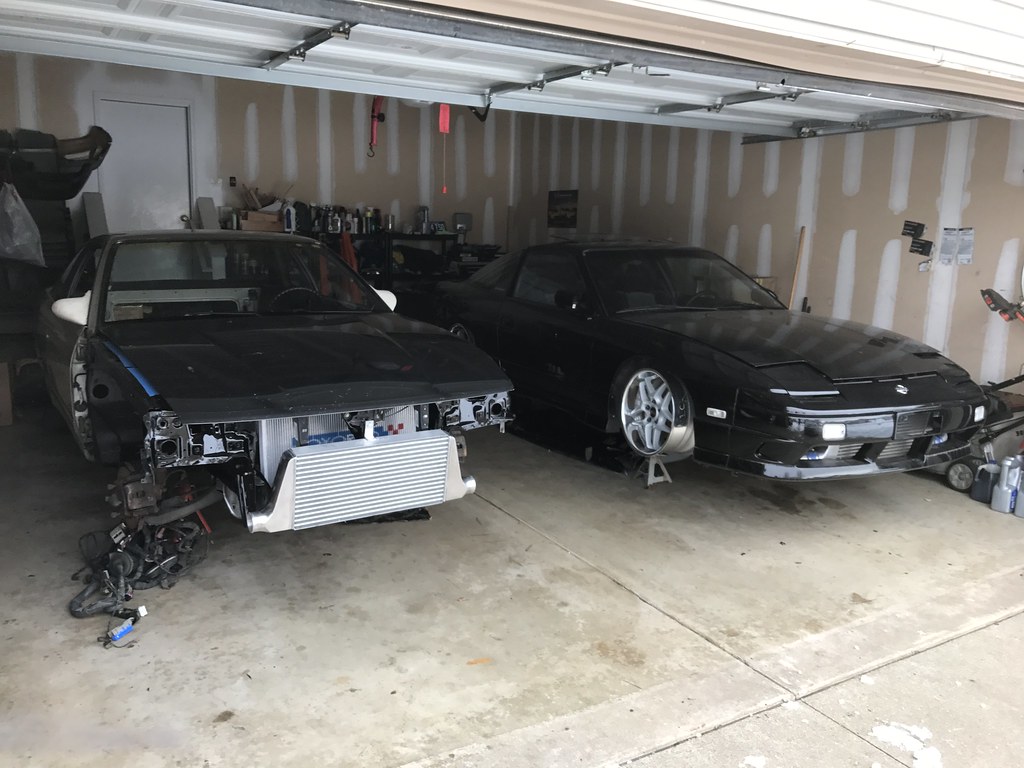 Anyway, I think that is about where things stand at the moment in my garage. I’ve got a few more parts arriving next week, so I hope to make some solid progress on the coupe. I’ll try to do a better job at working on the car and documenting it here in the weeks to come. Thanks as always for stopping by!