2020- Man, it is weird to type that out. Time flies! It’s been just over a month since my last update so I’ll try to rack my brain a bit about what has been going on since then. I of course celebrated Christmas and New Years with friends and family which is always a hectic but nice time of year. I don’t think I really touched my cars through the remainder of December aside from installing the NISMO clutch line and slave along with the stock clutch hard line. I also buttoned up installation of the Walbro 255lph fuel pump.

In what has become a bit of a routine for me, I found myself distracted by yet another parts car opportunity shortly into the new year. After parting out three of them between August and November of 2019, I told myself I was done with it until the weather broke in the spring so that I could focus on my own coupe build. However, the weather has been really mild with above-average temps and a general lack of snow, so I sort of left my mind open should the opportunity arise. I ended up sending a lowball offer on a black ’89 coupe that was relisted after New Year’s with a lower price thinking nothing would come of it, but to my surprise the seller accepted my offer. Not only that, but he threw in a spare KA24E engine as well. 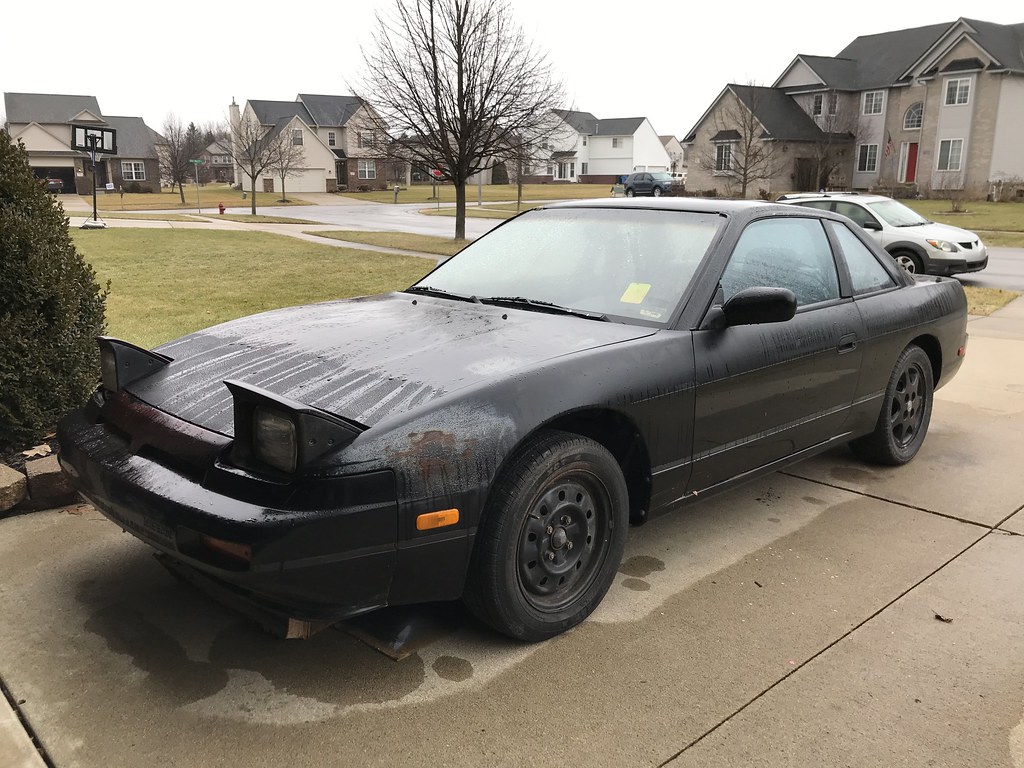 Part of my offer on the car was that the seller deliver it to me. He lived about two hours away, so I had expected him to decline- but I guess he was tired with the selling process and just wanted to be done with it. He arrived on a Friday evening right after my kids went to bed and we got the car off of the trailer and into my driveway. The fuel pump wiring was a bit messed up, so he had to connect a battery directly to the pump in order to make it run. One of the tires was flat due to dry rotting, but the unloading process was uneventful. 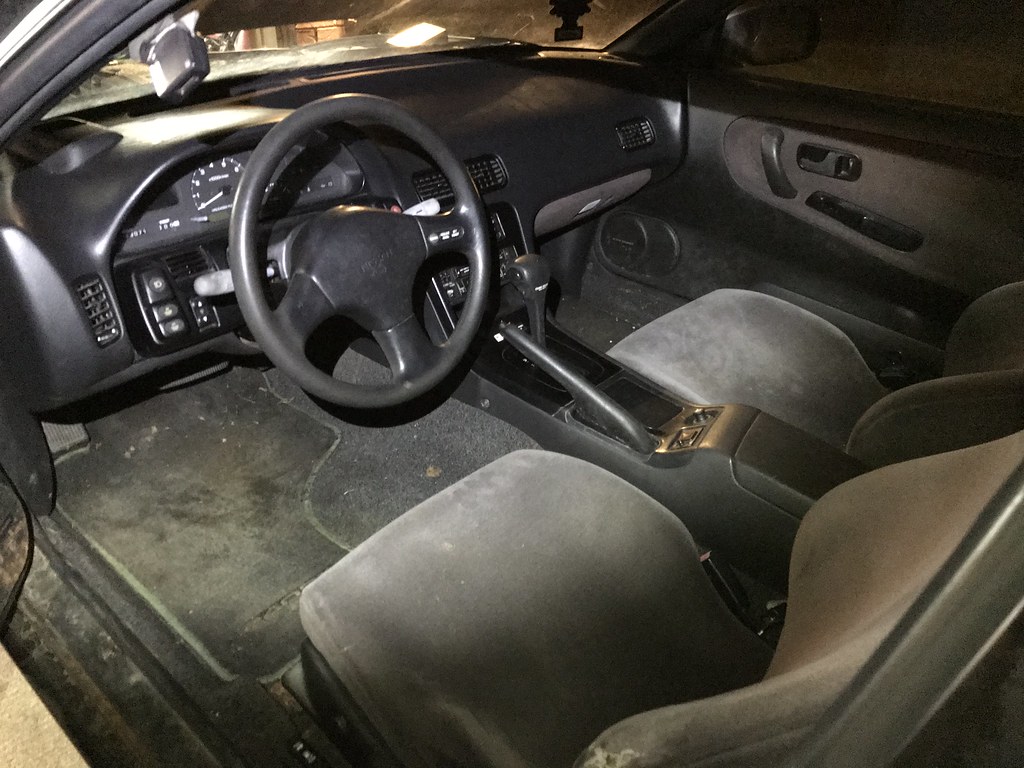 The car is a KH3 1989 240SX with a single cam KA and automatic transmission. Shockingly it only has 83k original miles on it and was essentially in stock condition. I don’t think any of the interior had ever been taken apart before, so there were a lot of good parts to sell and even a couple to keep for my own cars. It bummed me out to tear down a car with such low mileage, but rust has really taken a toll on this one as usual. The frame rails are virtually gone and there are large holes in several spots along the floor. I was excited to see that the car had a working heads up display (HUD) though! I had never seen one of those in person. The HUD windshield is even uncracked- though I doubt it can be removed from the car without destroying it. 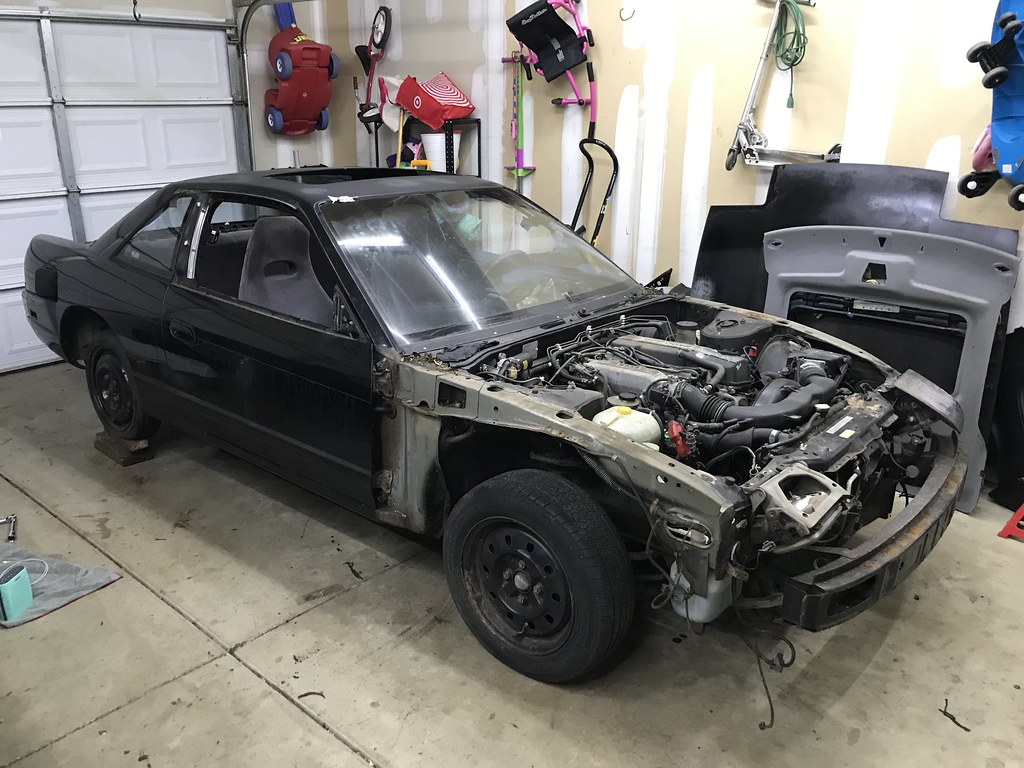 Three weeks will have passed since I got the car tomorrow which is roughly how long it typically takes me to find the time to tear them down. My hope is to complete it by this weekend and get the shell out of my garage ASAP so that I can bring my coupe back into the garage. It’s been sitting outside in my driveway while I tear this parts car down and I am worried someone in my neighborhood might complain- though I haven’t heard anything just yet. Fingers crossed it stays that way! In any case though I would love to have it back inside and out of the elements. 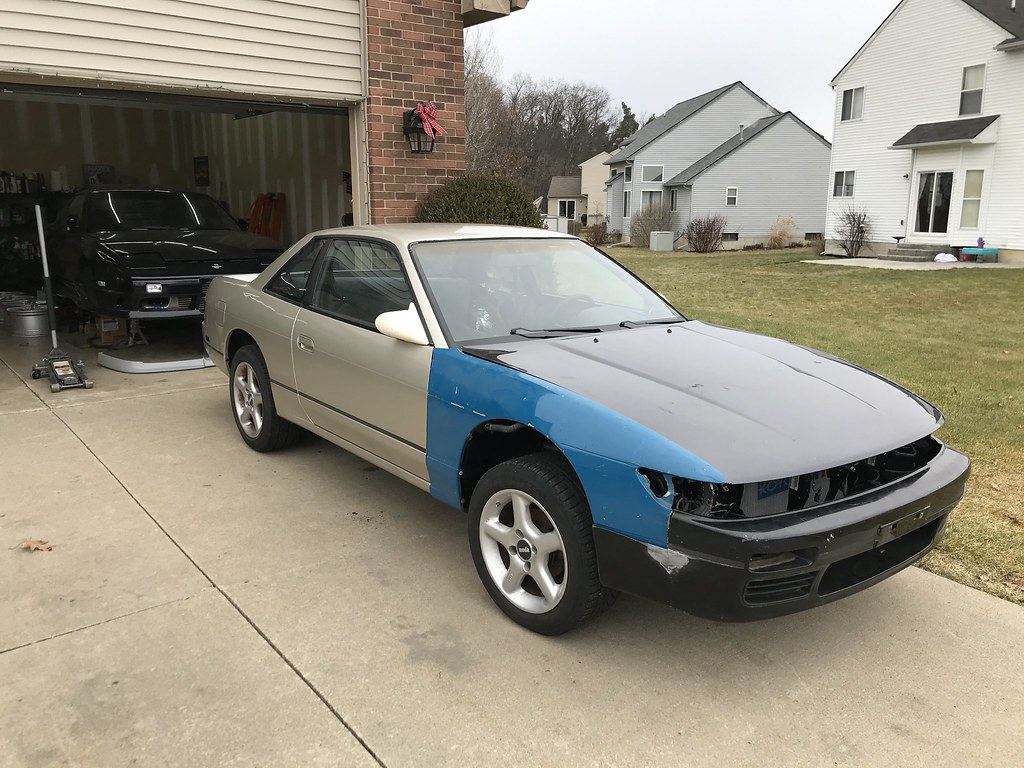 In other news, Trucky and Red brought me my AVS Model Vs from Wisconsin when they came from Chicago to pick up some parts I had for sale. A number of people passed these wheels along to get them to me and I am super appreciative of that! I tossed them on the car for a quick visual and I think they have the potential to be pretty cool. I have tires for them from my TEs but need to order some spacers before I can install them. I’m kind of holding off on that for the moment in case something I want more comes along before spring, but unless it’s a set of 17/18 bronze LMGT4 I doubt they are going anywhere. I’ll also need to have my new front lip painted before spring as well, but I’ve got a bit of time before that needs to happen. 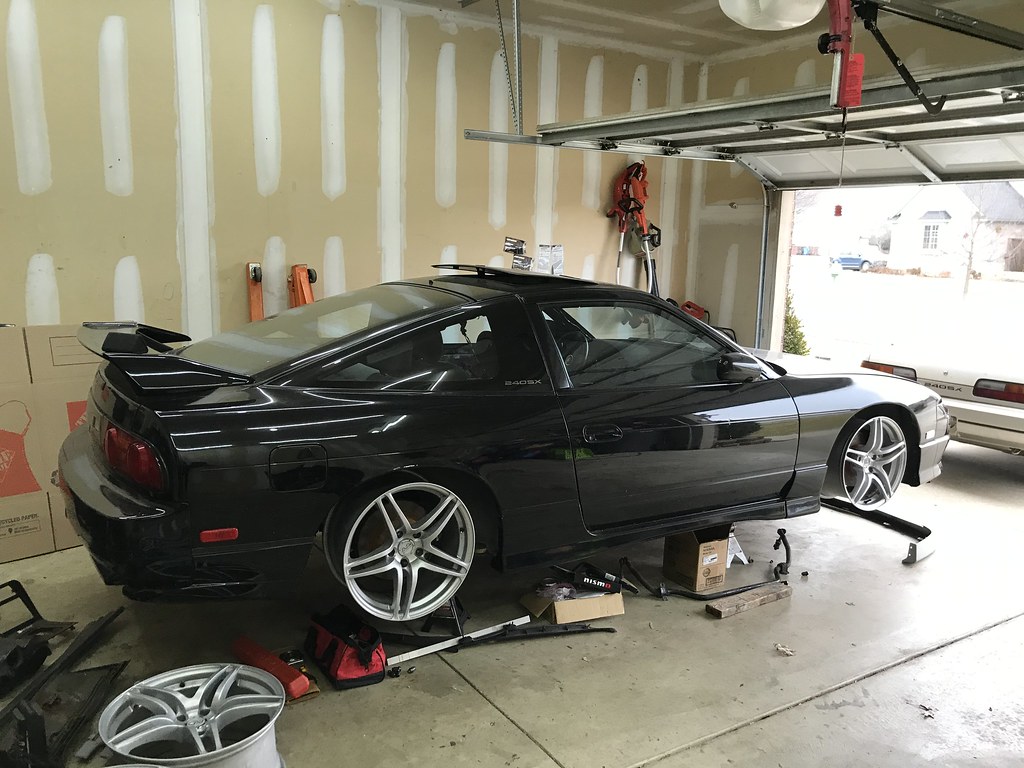 So that’s where things stand right now. The other thing that has taken a bit of my time this week is an email I got from Flickr explaining that they are raising their yearly subscription rate again for their image hosting service. This has been my home base for the last ten years and where I store and host all of my car related content. If you see a photo on this blog or in my build thread on Zilvia.net, that’s where it is currently hosted. My gut reaction is to not renew my account and find another solution as I think the company is likely going to go under, but that means dead images all over the place. It would take a very long time to go back and fix all of those images here on the blog as there are over 300 posts, so I am not sure what I am going to do. Many have encouraged me to just share my build content on Instagram exclusively, but I like having the opportunity to write in a format like this. Even if very few people read it, it’s therapeutic for me and I enjoy having such a detailed record of my progress over the years. I guess we’ll see what happens.

Finally, I saw that an artist named Duncan Brooks that I follow on Instagram was open for commissioned drawings back in December and reached out to him to see if he would create drawings of my hatch and what I hope to have my coupe looking like by the spring. I am really excited about how they turned out! You can see more of his work on his instagram account @duncanbrooksdesign. 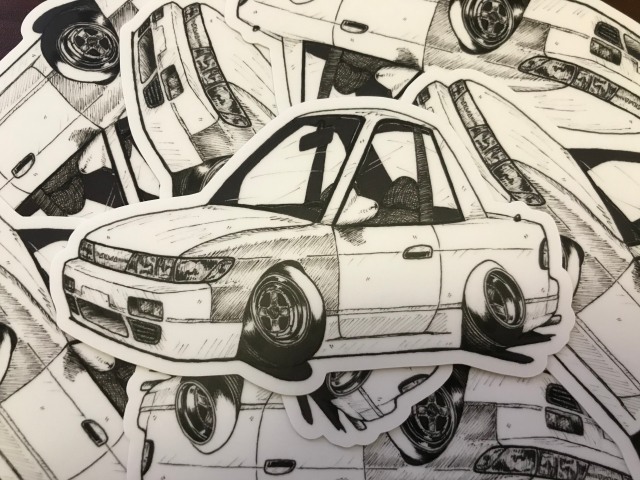 With Duncan’s permission, I had them turned into stickers. I’ve added these to the store page- drop me an email if you’d like to snag some. I’ve also restocked some of the previous illustration stickers that I created in the past.

I’m looking forward to enjoying life and trying to continue to create cool things in 2020. In roughly a month I will be traveling to Houston, Texas for Final Bout: Special Stage South. It should be an awesome time! Looking forward to it.

Thank you as always for stopping by and checking out my long-winded posts. It means a lot to me to hear people still check it out from time to time! I’m doing my best to try to keep things rolling. Happy New Year!