Posted on March 6, 2020 by camryonbronze

Houston has become a bit of a second home for me in the past few years. After meeting Jimmy at the first Final Bout event back in 2014, we became fast friends and have been really close ever since. Fortunately flights are always very affordable from Detroit, so I try to make it down there at least once a year to see Jimmy and all of the other great friends I have made down there.

2020 has been no different thus far. Despite just being down there back in October, I returned sooner than I had anticipated- but not just to hang out with the usual suspects this time. Final Bout announced a few months back that there would be numerous Special Stages this year around the USA, including a stop at a local kart track not far from where Jimmy lives in Houston. Naturally I couldn’t miss this opportunity as I have never attended a drift event down there. It would be really cool to see everyone drive in their home state as when I come down we typically just hang out and don’t really attend drift events.

I arrived around 9:30 AM on Saturday, almost an hour ahead of schedule. I have never had this happen with a flight before, but I guess we must have had a good tail wind. Jimmy was kind enough to scarf the breakfast he had just sat down to at Waffle House and rip over to pick me up from the airport in his R32. It’s always a cool feeling to get picked up from the airport in a D car. 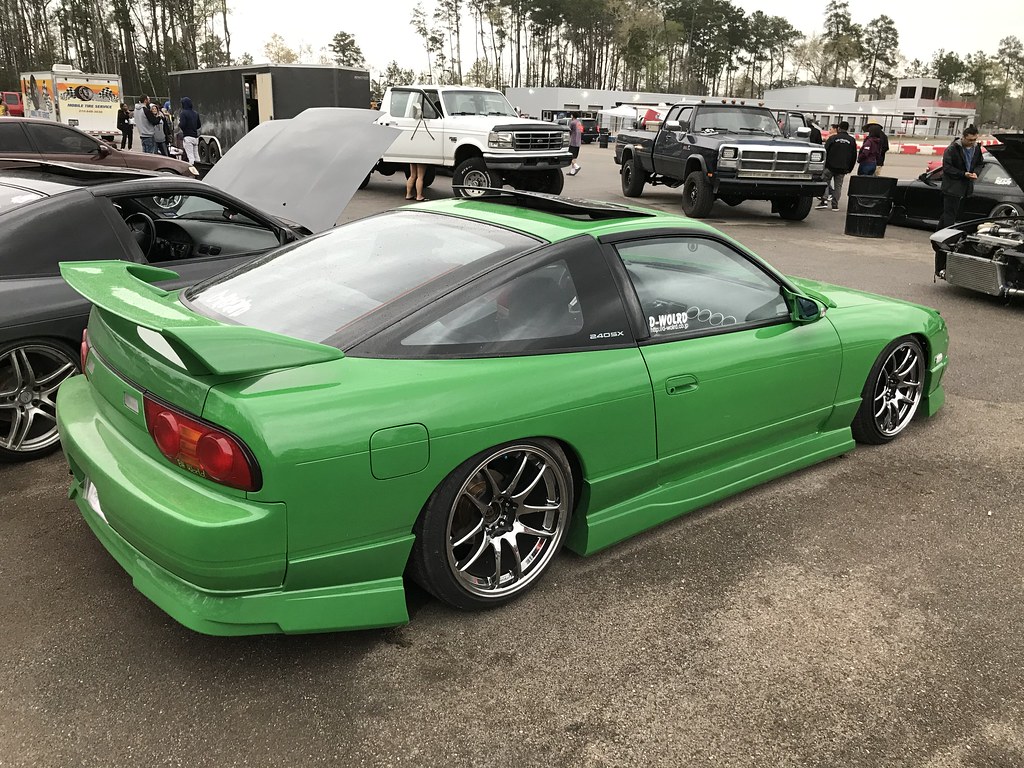 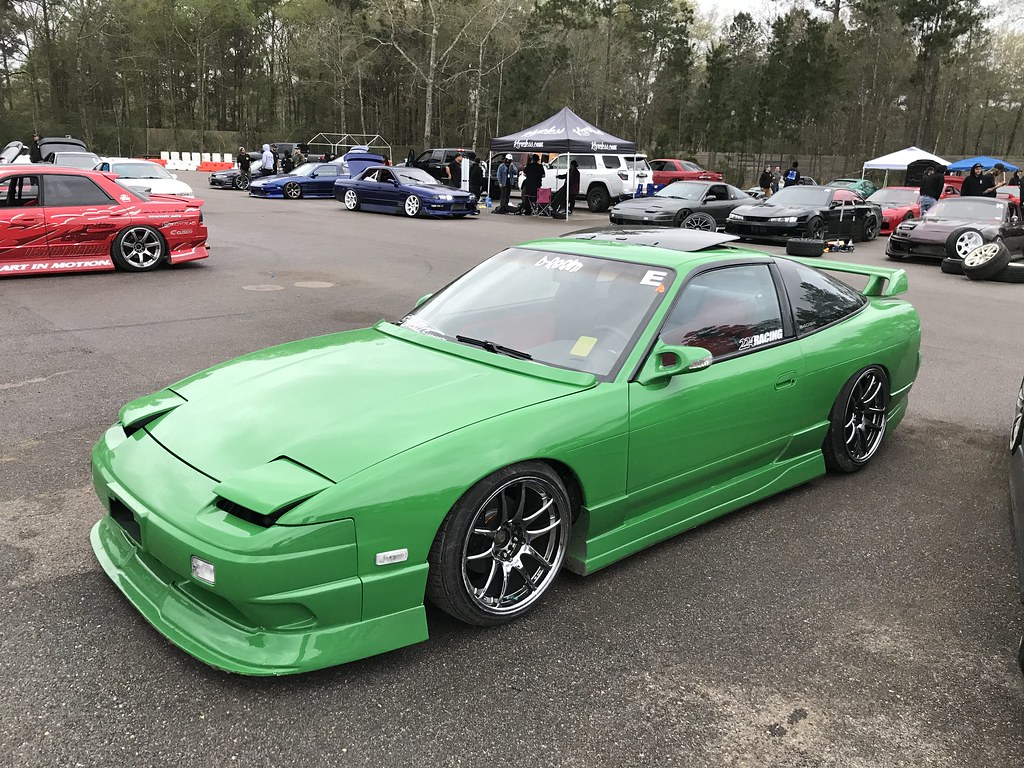 Logan’s car was one of the ones I was looking forward to seeing most. The body work on this car is amazing. Great to meet you Logan!

We then cruised right to the venue hosting the event, a local kart track called Speed Sportz. It’s a really cool facility with a couple of kart tracks that looked like they would be really fun to race- though I didn’t get to on this trip. We spent the day on Saturday greeting everyone as they arrived to set up their pits. It was super cool to meet lots of people I had talked to online and to see lots of friends as well. 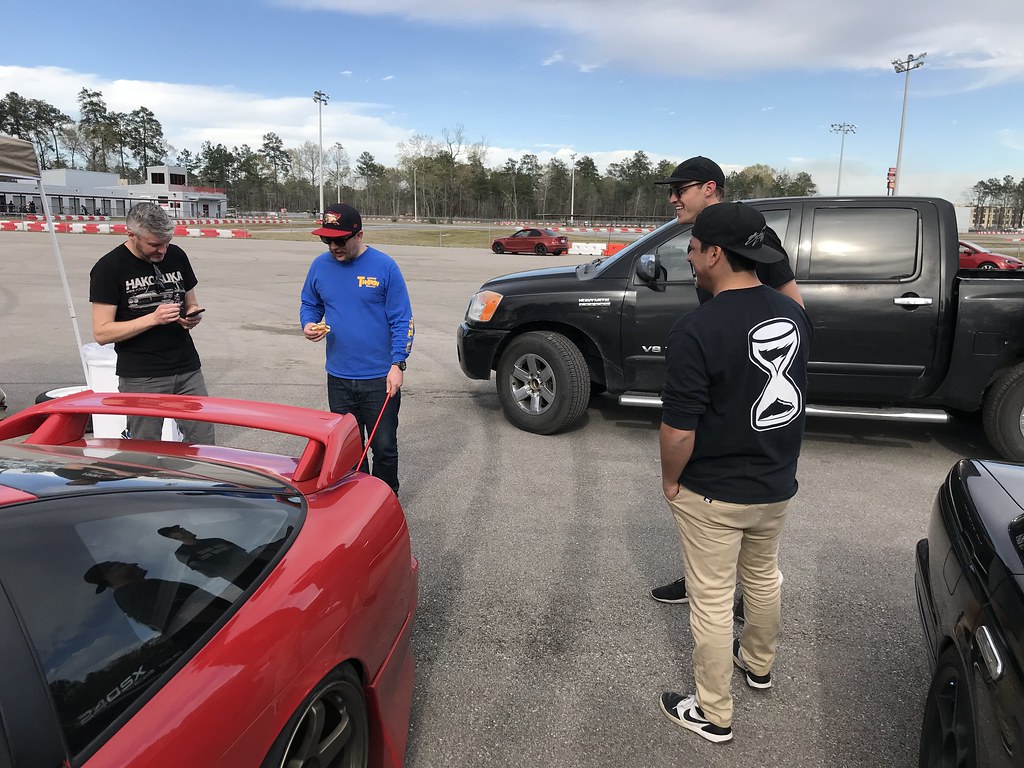 We left around 4 PM to head to downtown Houston for a pre meet hosted by none other than John P and Mayday Garage. It was super cool to see all of the cars taking over the highway on the way there- something I won’t soon forget. The meet got pretty wild and was very similar to the WekFest premeet I experienced during a Houston visit a couple years back, though with seemingly less shenanigans and police activity. There was a live metal show going on which added to the crazy atmosphere. 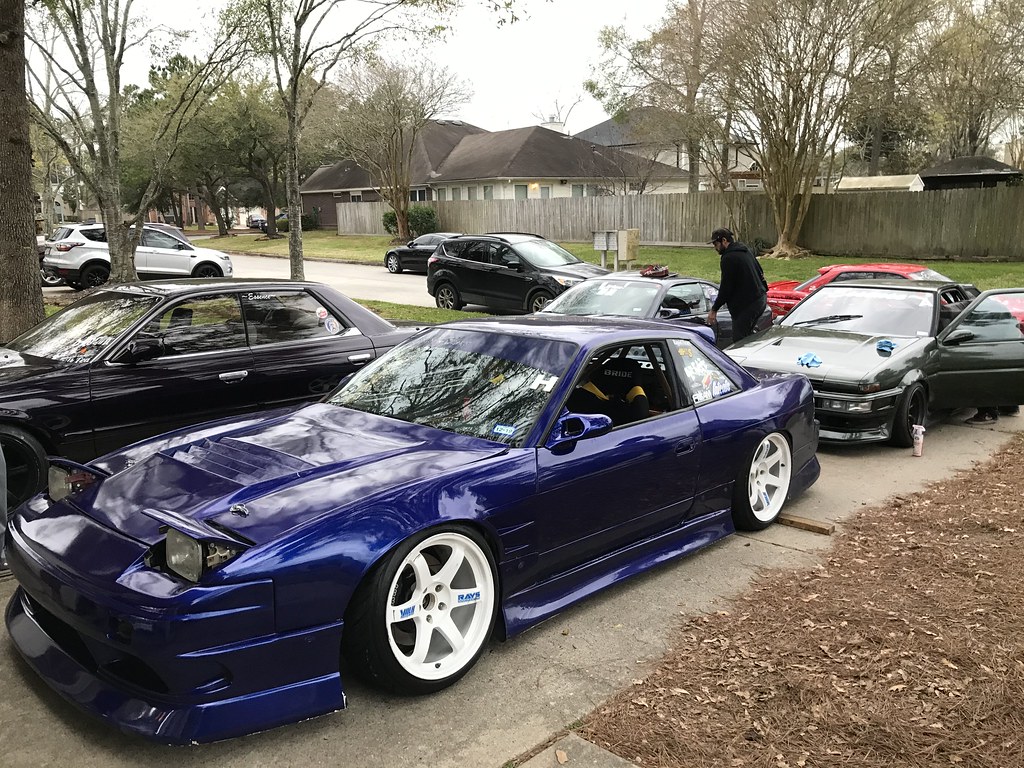 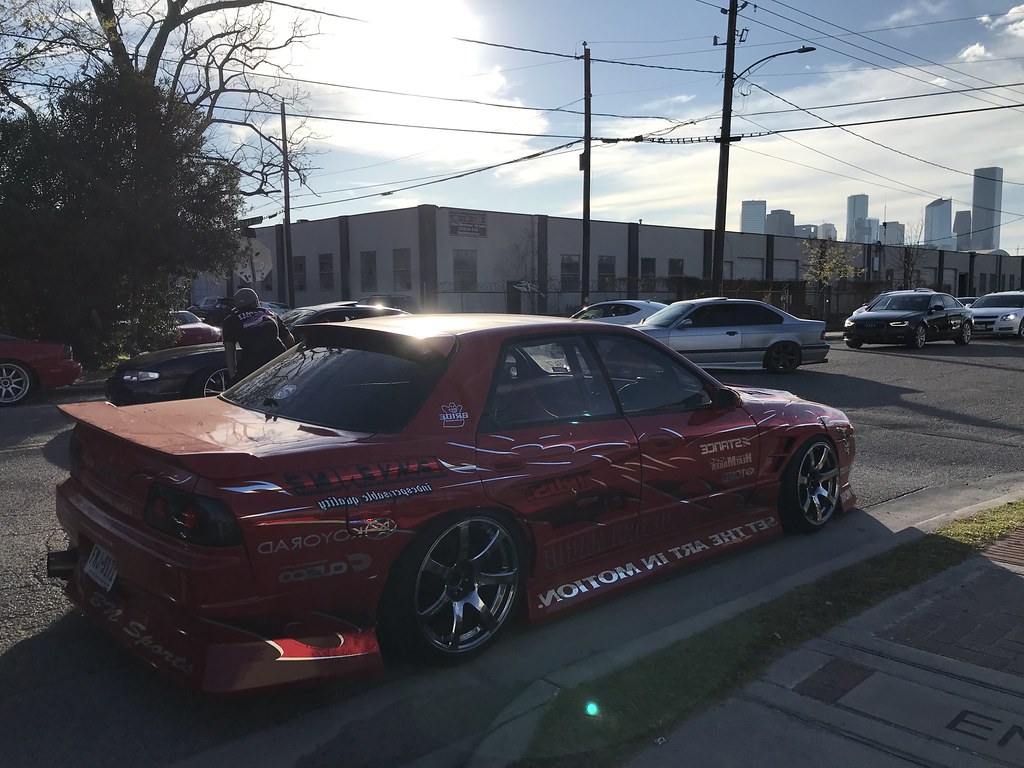 At one point I noticed that Streetstyle Jay and crew happened to roll by which was really cool to see. It’s crazy to see cars and people you’ve talked to online for years just cruise by in real life. Very cool to meet all of those guys and see their cars! We ended up leaving the meet fairly early (much to my delight as I was ready for some food and Tylenol at that point) and heading back to Jimmy’s house to have some pizza and celebrate Triggs’ birthday. We ended up going to bed at a fairly reasonable time as well which was great. 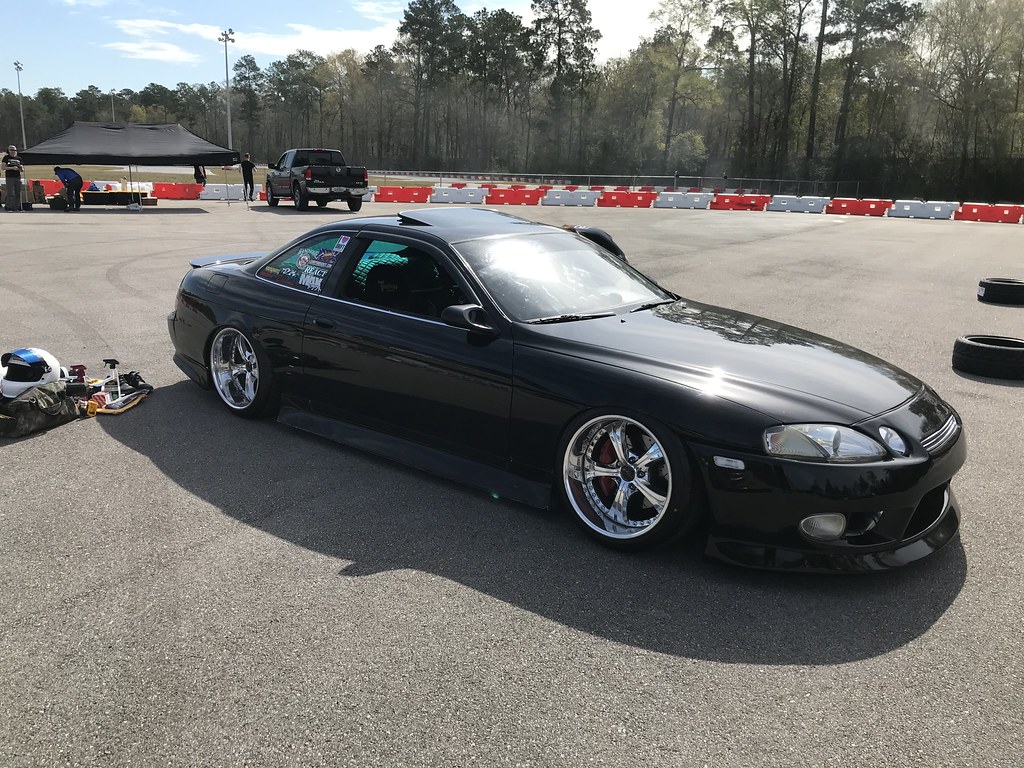 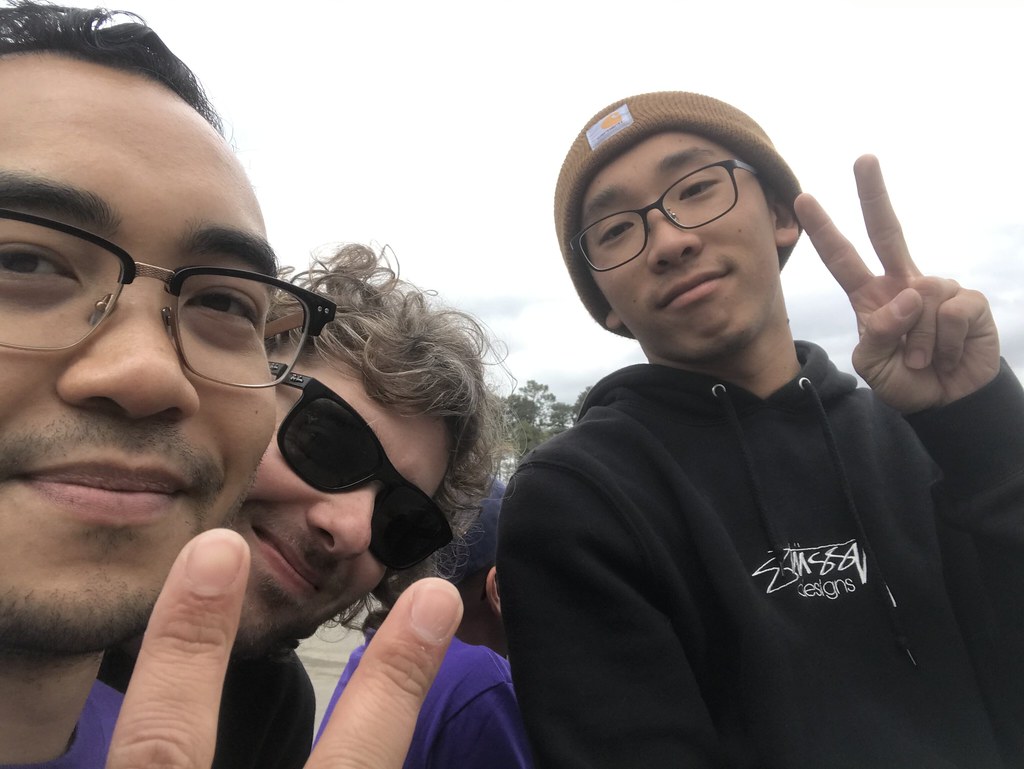 On Sunday, we woke up and headed over to the track for the event. A lot of the event itself is a blur as the event went by really fast, but it was a great time. There was a lot of great driving, but the event wasn’t without its share of carnage either. Unfortunately some of my friends from FatCats were involved in a crash with Mike’s S14 taking the brunt of the damage, but everyone was OK and I think he was in good spirits despite the damage. Thankfully he was able to get back out there to enjoy some driving later that day. 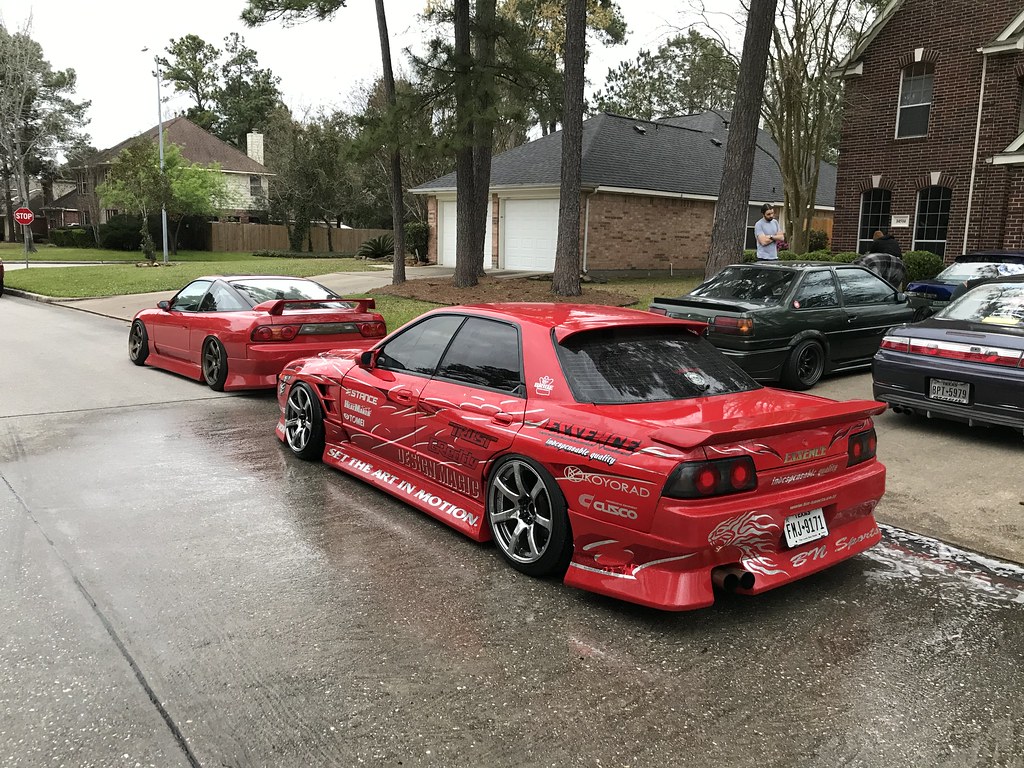 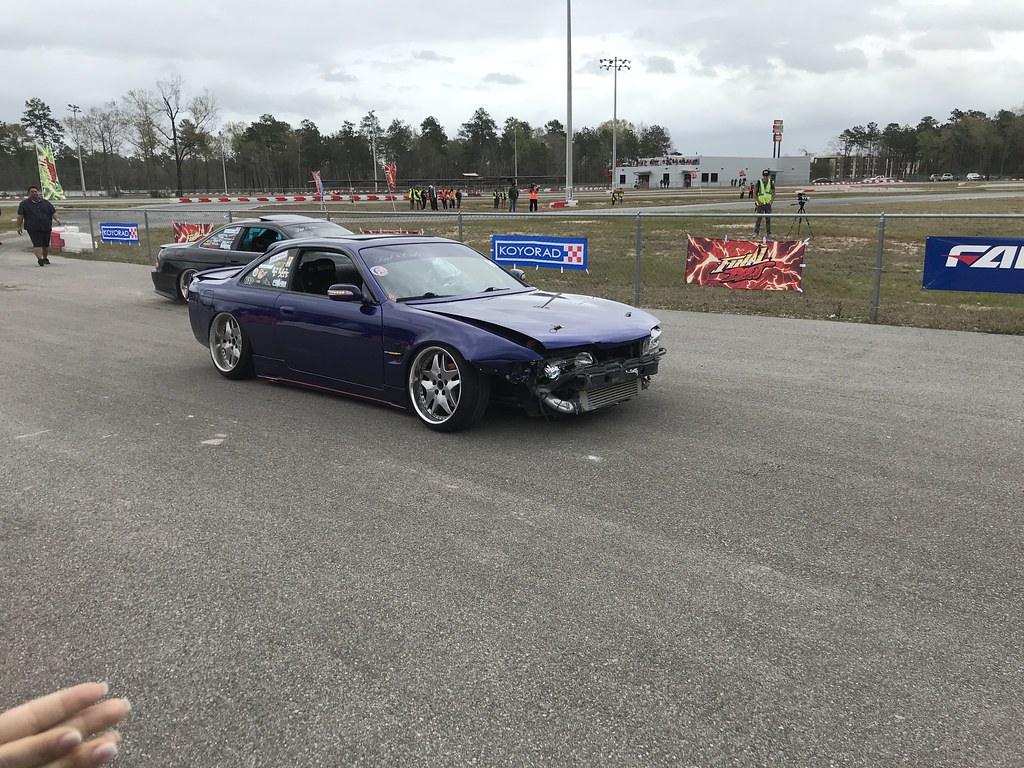 The aftermath of Mike’s crash. 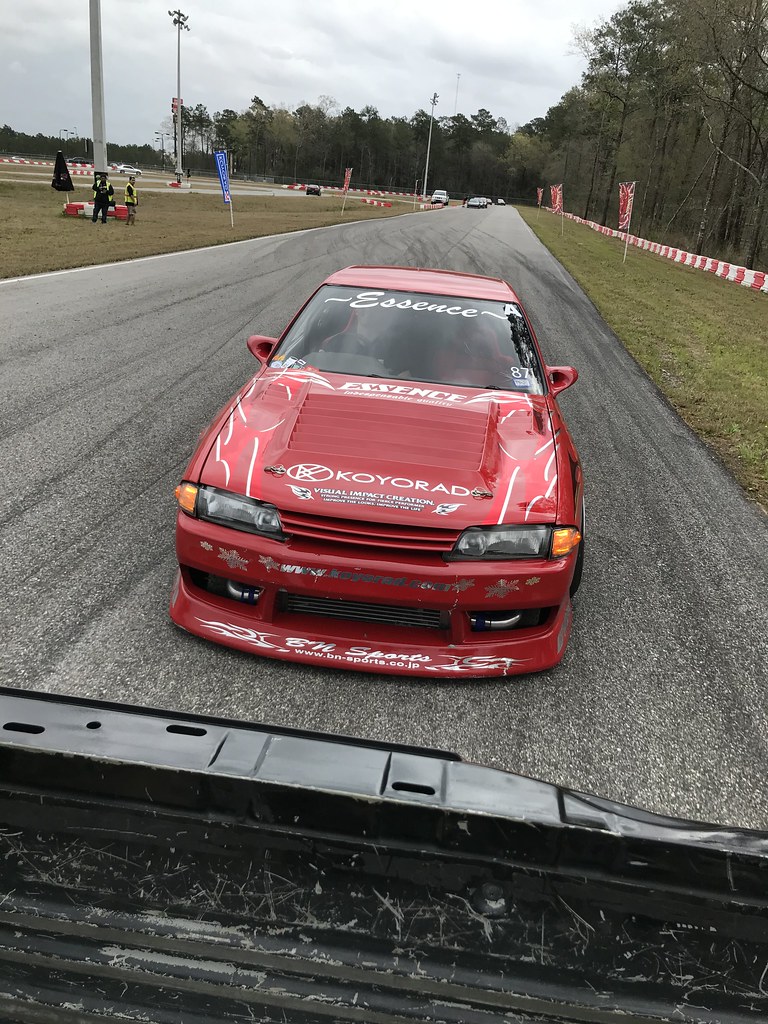 Cool shot of Jimmy’s car on track I took from the back of his truck after a quick on-track repair. 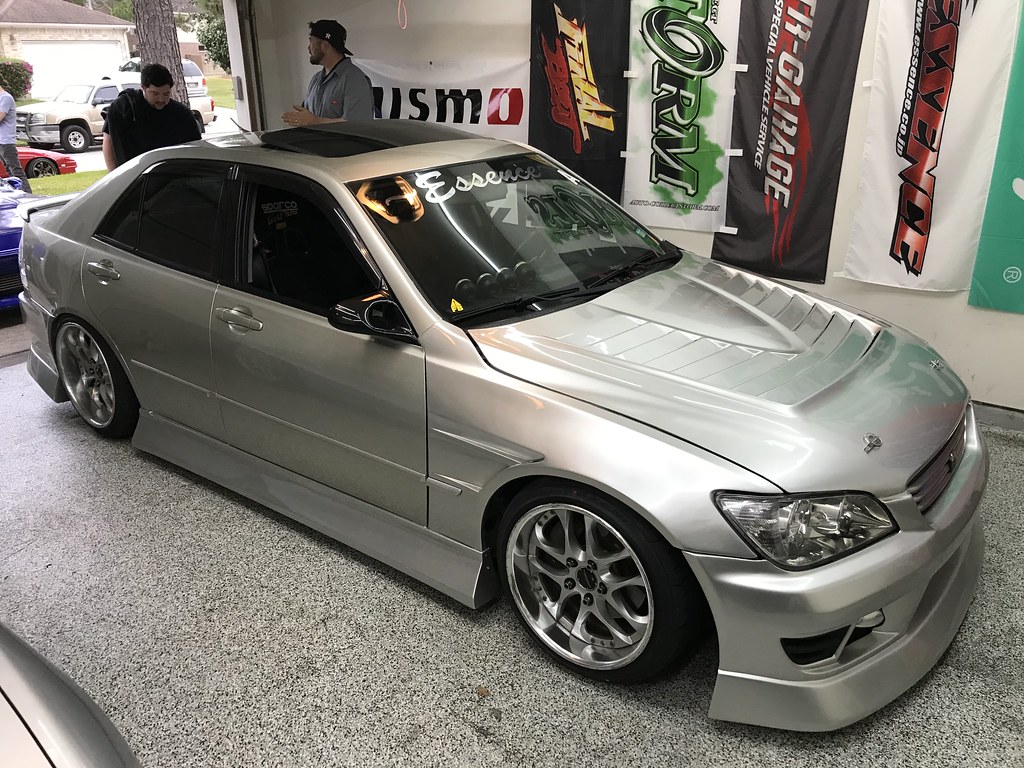 Andrew’s car fresh out of the paint booth and back on BN aero. So good!

Before I knew it, darkness had fallen and we had finished cleaning up after the event. I got to meet some cool people like Josh Buckley and Stewart Leask at the event which was awesome. I had known about Stew for many years through Zilvia and talked to him a fair amount, so it was nice to meet him and his wife. We headed back to Jimmy’s place before going out for some delicious and authentic Texas Mexican food at Taco Bell. 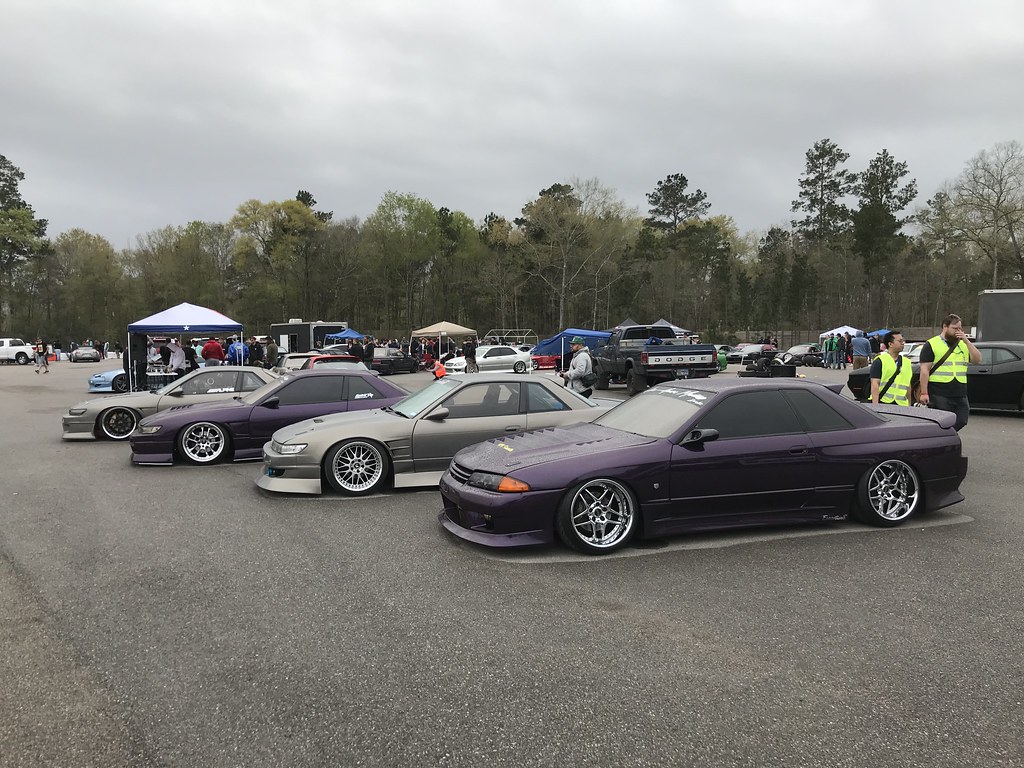 Very cool to see all of these cars and meet the owners!

Monday was very low key. It felt great to sit around in Jimmy’s driveway and shoot the breeze while everyone washed their cars from the event the day before after going out for a nice breakfast. Later in the afternoon Simba, Ilia, 3L, and Gaz came over to hang out for a bit. Gaz traveled from the UK for the event and was a really cool guy. In the afternoon Jimmy decided to remove the livery from his car as he was ready for a change, so we peeled all of that off rather quickly with all of us working on it. I was hesitant, but I actually really like the more street style of the car without the stickers on it. It turned out really nice. 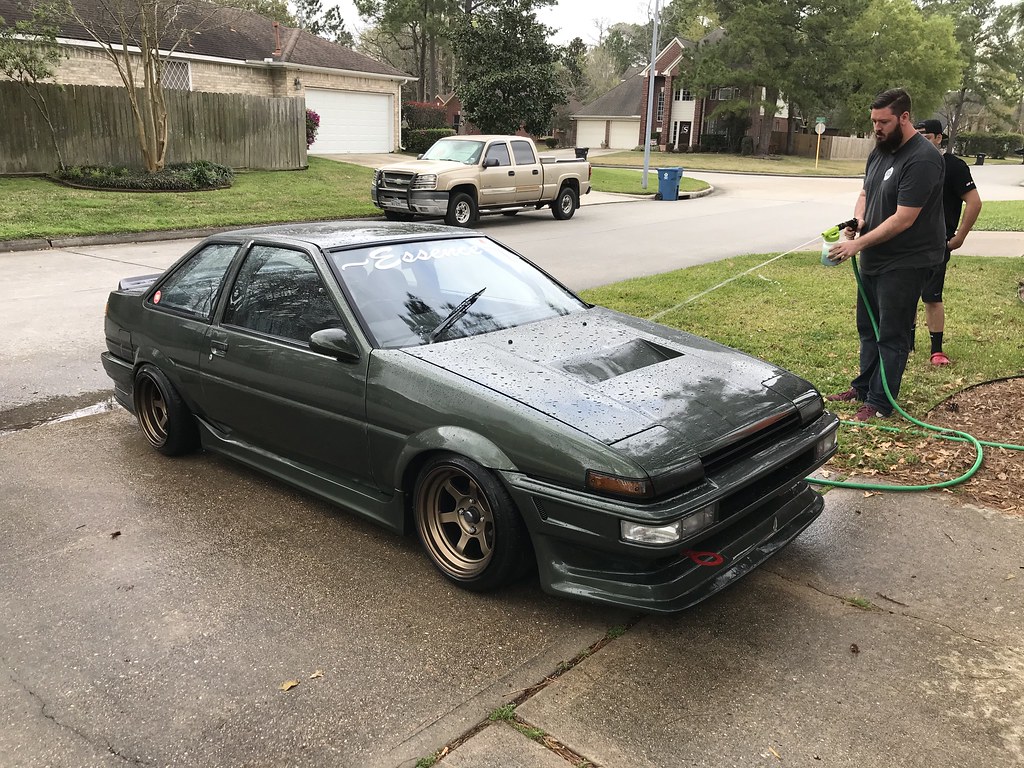 The paint job on Harris’ Corolla turned out great! 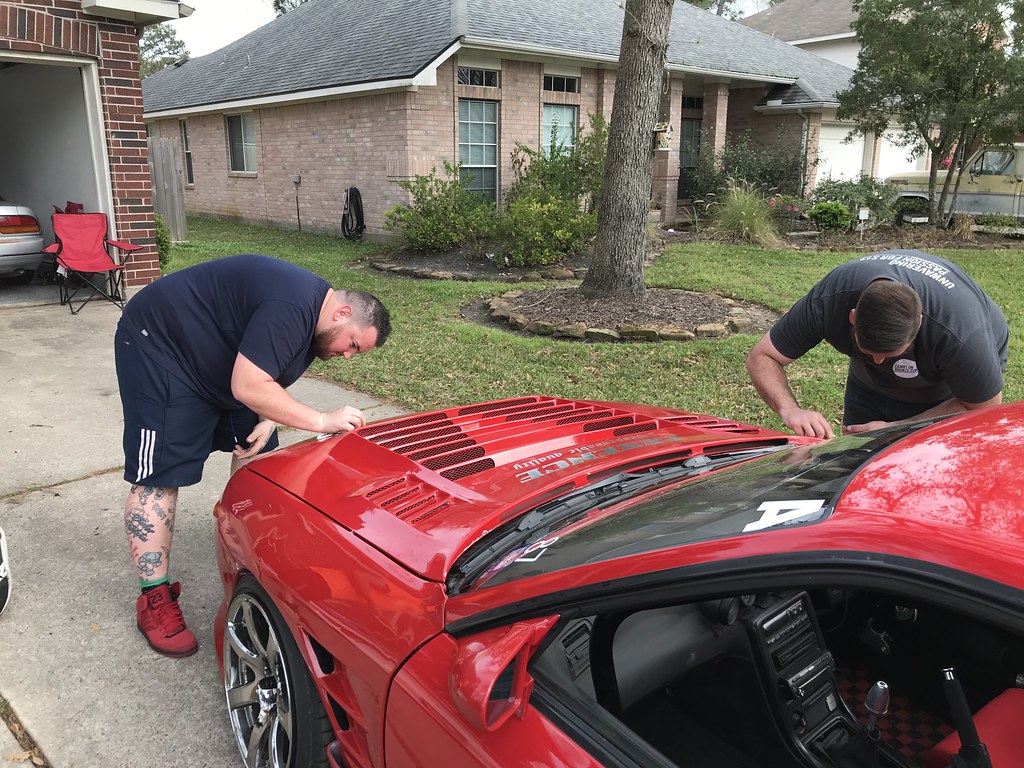 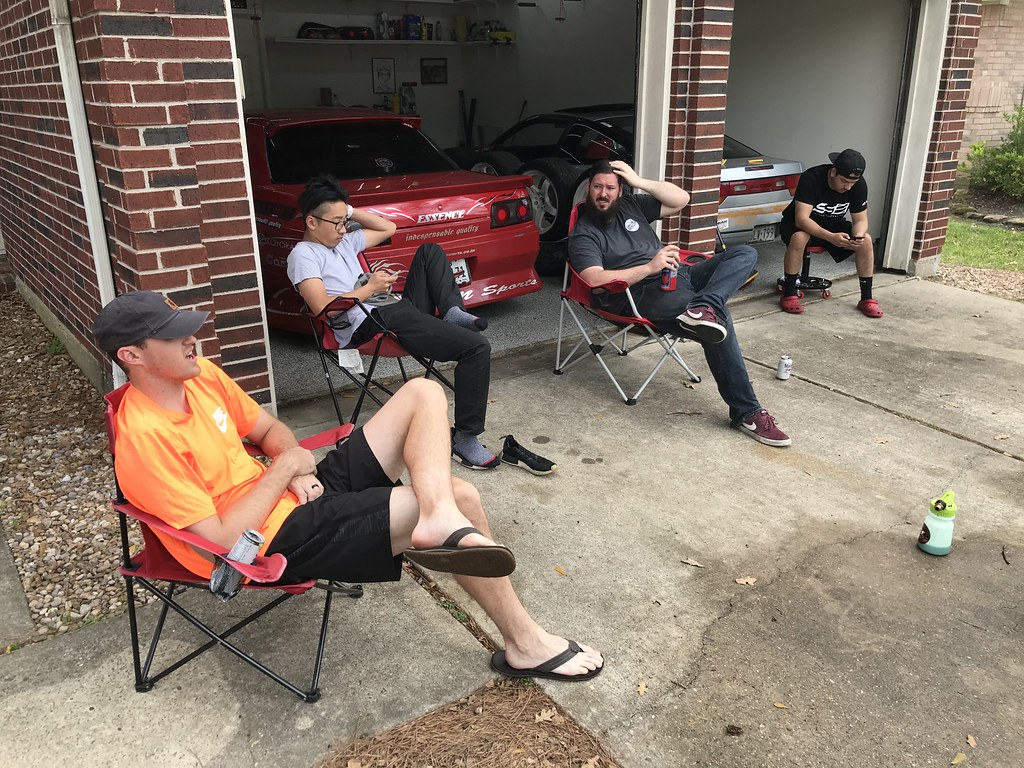 After grabbing some Chick Fil A, Simba gave me a ride to the airport since his flight to Chicago was due to leave around the same time as mine to Detroit. It was a little rough returning to the winter weather here at home, but thankfully things have been fairly mild since I got back. It was great to be home with the girls again though! Always nice to be home. 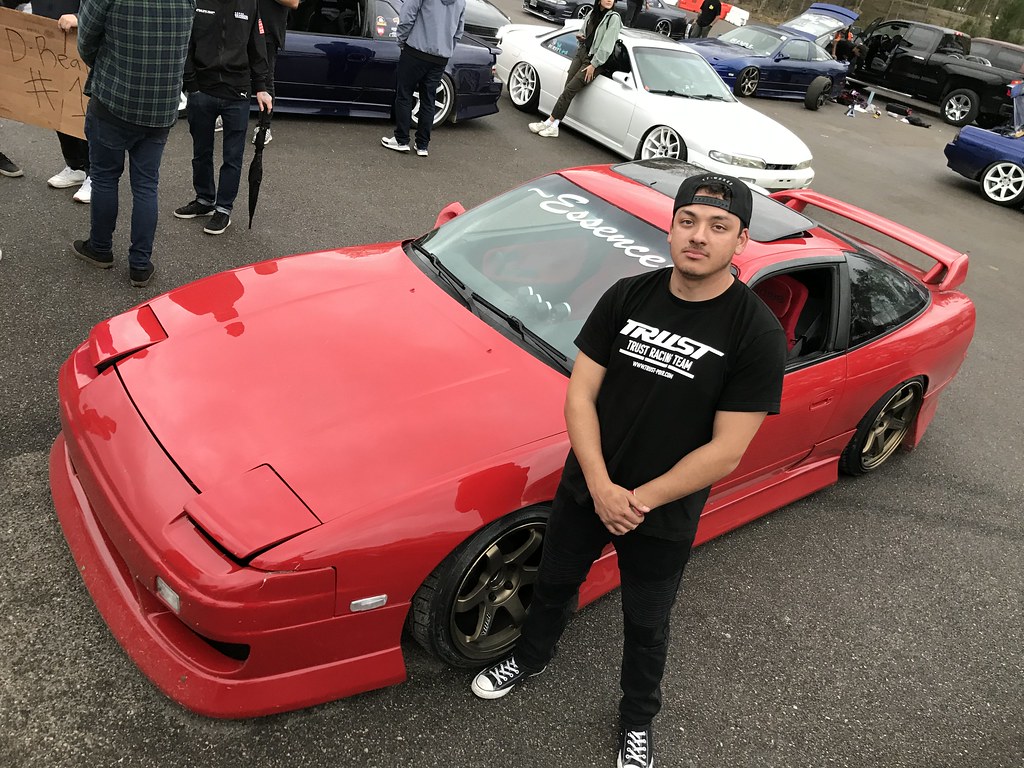 Kev’s finished car was another one that I was beyond stoked to see. Great build quality and even better driving all weekend. Great job Kev!

All in all it was a great trip! I can’t thank Jimmy enough for giving me a place to crash and carting me around all weekend. I feel a bit refreshed and excited to work on my own cars now. We’re supposed to have a few days in the 50s the next couple weeks, so I am hoping to get my hatch put back together and ready to be driven in the coming days. Hopefully I’ll have some progress to report next Friday. 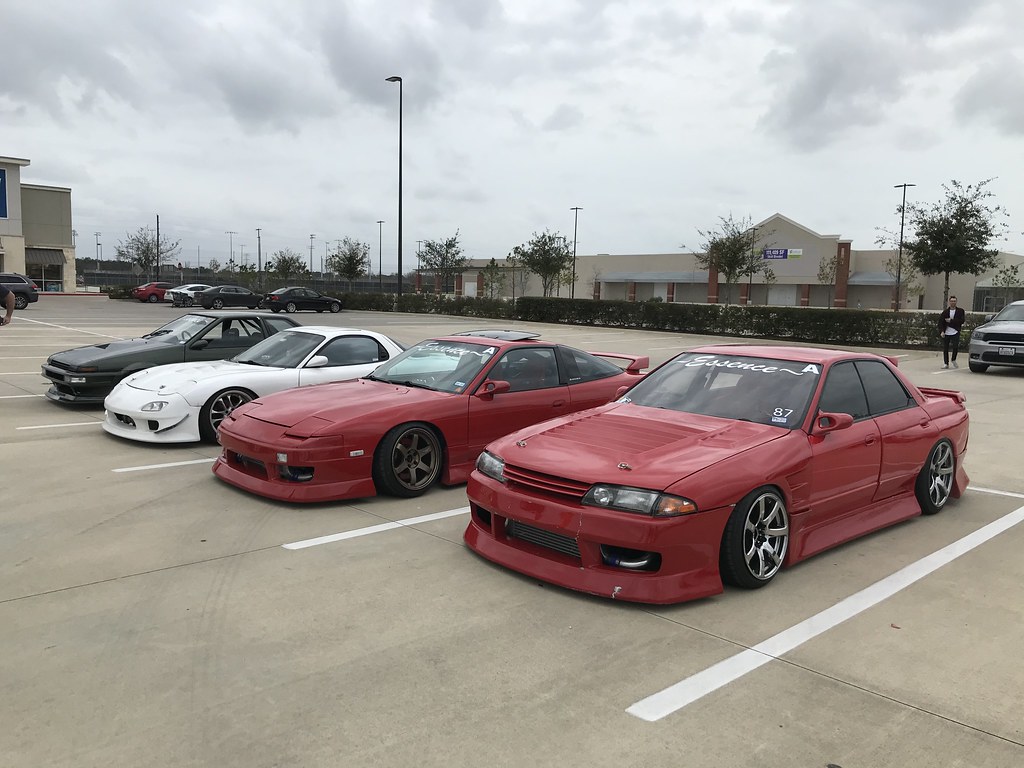 Thanks for reading! Don’t forget to move your clocks forward on Saturday night. Hopefully this means spring will be on the way very soon! Have a great weekend.