I’ve realized over the last few months during conversations with numerous people (some of them friends and some of them strangers) that a lot of people don’t know the full back story of my car and what it means to me. A lot of people think it is a different chassis than the one I started with in 2008 and don’t realize that I bought the same shell back last fall after parting it out two years prior.

Most of the car’s history has been documented in my build thread on Zilvia, but I know that forums are beginning to die off in favor of other forms of social media and a lot of people may not have seen it in the past seven years. I thought it might be fun to take an abridged look back at the story of the car and recount how it became what it is today. If you’re up for a long story, then settle in and get comfortable! 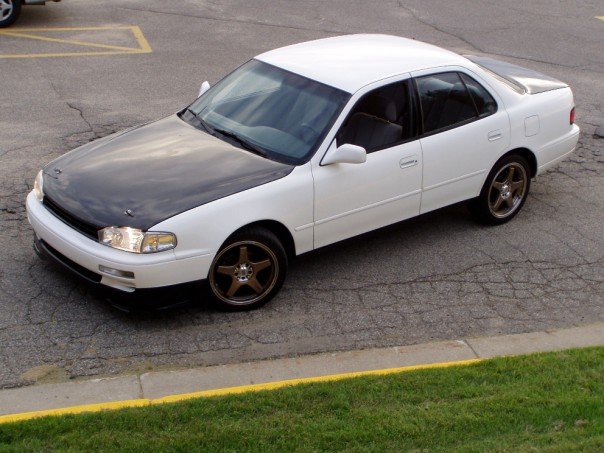 So, like I mentioned, this all began in 2008. I was in my last year at college and at the time I was driving a decently modified 1999 Toyota Solara. My first car in high school was a 1994 Toyota Camry and I did my best to work with what I had. About half way through college I turned the Camry back to stock for a winter beater and picked up the Solara as a more viable platform to modify. I put it together fairly quickly as there wasn’t a lot of aftermarket for it- lip kit, black interiors swap, TRD supercharger, supporting fuel and exhaust modifications, etc. I was really into the car and loved that I finally had something decently sporty with a manual transmission. 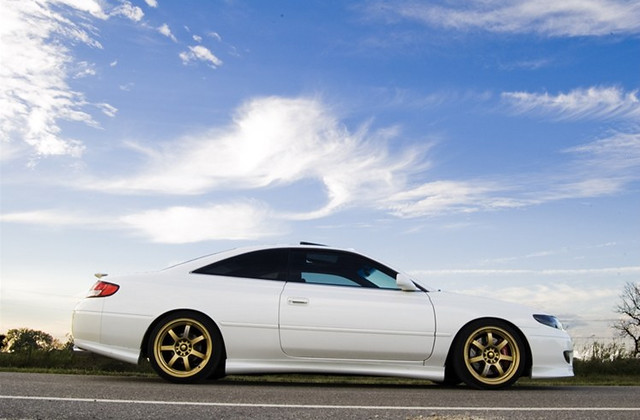 During the winter of 2008 I started hanging out with a couple of new friends I had made at a local shop that worked on my Solara from time to time (this was back before I had a ton of experience with more involved car projects. I had the shop install an aftermarket clutch and flywheel for me as I didn’t have the knowledge or a place to do it at my college apartment, for example.) Mike was the employee at the shop that worked on my car frequently and Steve was one of his friends. During this time Mike picked up an SR swapped S13 coupe and I spent a couple of weekends working on it with him- installing a Silvia front end, stripping it down for paint and a roll cage, and eventually taking it for a spin when the build was completed. 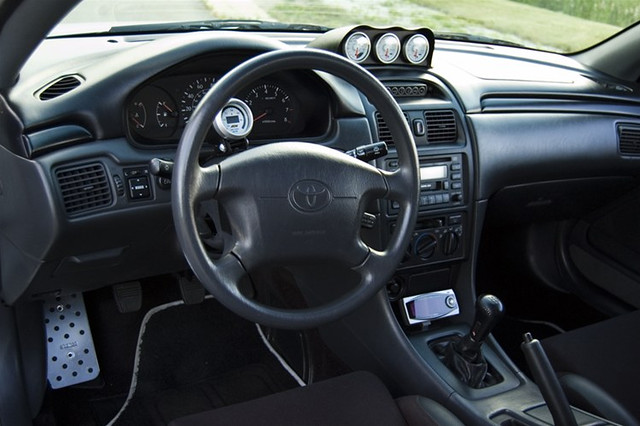 Mike’s friend Steve had an S13 hatch with a basic SR swap and FN01s on it that he gave me a ride in at a local dyno day that summer in the rain and I knew I wanted to build one. I loved the look of the car, how fast it felt, the extensive aftermarket, and the fact that it was rear wheel drive. The car made about the same power on the dyno as my Solara but felt so much faster due in part to how light it was. I also really liked the fact that it was a true iconic Japanese muscle car as the Solara was only sold in North America. It was appealing to me to own a car that you could put legitimate Japanese parts on. 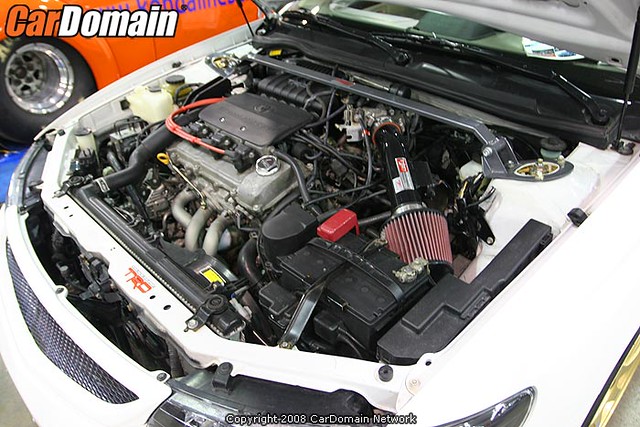 I had always gotten easily attached to my cars. At this point in my life the Solara and the Camry were the only two cars I had ever owned. I really liked my Toyota a lot and enjoyed having something different, but I began to ponder what it would be like to sell it and build an S13. As fate would have it, I was rear ended hopping onto the freeway one August day and the Solara was destroyed. I actually got hit just a couple hours before my then girlfriend Alicia was coming to get me to head out for a weekend trip where I planned to propose. I was definitely bummed, but I had to act as if it didn’t bother me in order to go through with the plan and make the weekend a meaningful one. 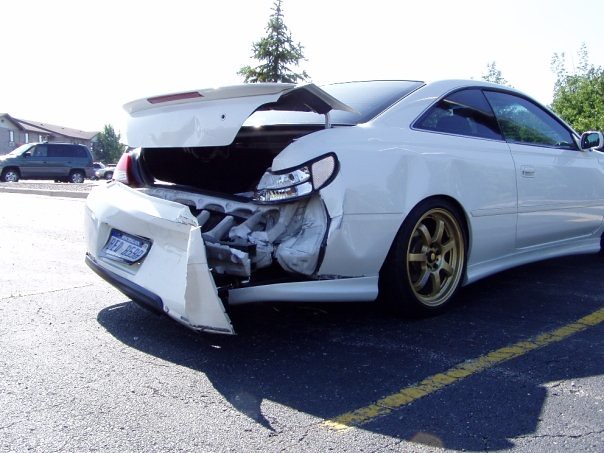 In the weeks that followed I thought hard about what my next move would be. I managed to get most of the parts removed from the car and sold before making an insurance claim and getting my check for a replacement car. I was torn about what to do: I had just proposed to my girlfriend and I was entering my last semester at college. Alicia had already graduated and was out working in the real world. It was a long topic of discussion as the responsible thing to do would have been to put the money from insurance away and drive my Camry, taking a break from modifying cars all together. I just couldn’t see myself without a car to tinker with as it was the thing I was most passionate about in life from a hobby standpoint.

I ended up test driving an identical Solara to my previous one and thought about transferring my parts to that chassis, but my heart just wasn’t in it. I ended up going to check out a 1993 Nissan 240SX that I found listed on Craig’s List in Holland, a town near my university. The owner of the car, Olay, had done an SR20DET blacktop swap back in 2001 or so and ended up graduating from college and starting a family. With a little one at home he found that the car just sat at his parents’ house unused for several years. The first time I went there I just checked it out and chatted with him for a while. I think he took me for a ride but I wasn’t able to drive it yet. I had been warned about rusty frame rails on these cars, but when I looked underneath of it I didn’t see any visible rust to speak of. It seemed that the car was in pretty good shape.

Here’s a photo from the original Craig’s List ad: 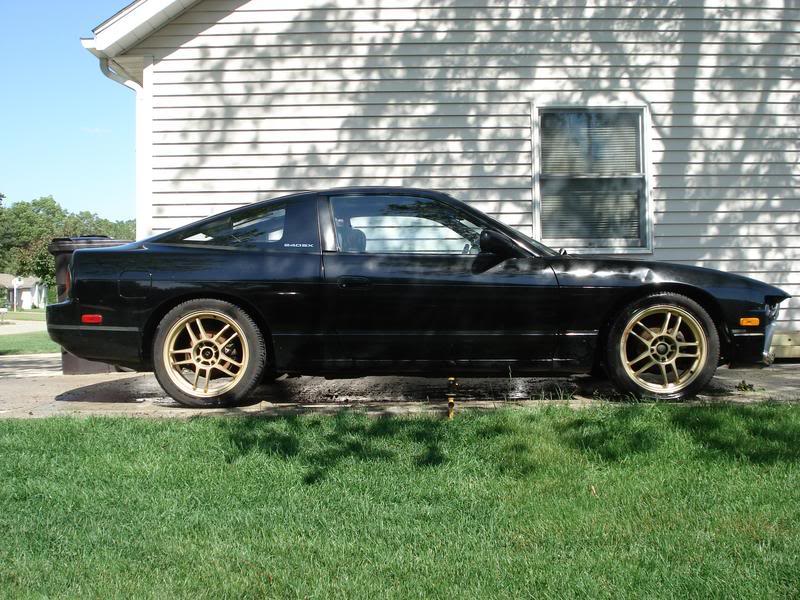 There was something about the S13 that felt a little out of control. The power level was pretty wild to me and the car just seemed rough around the edges. It was loud, the interior smelled funny, and it didn’t have a front bumper. The paint was pretty dingy from sitting under a tree for many years but it seemed like it would clean up OK. Olay took me around the block and wasn’t able to get on it much because it had rained and the car was all over the place. I knew at that moment I had to have it. I told Olay I wanted the car but needed to talk it over with my fiancee and get my check from insurance before I could buy it. 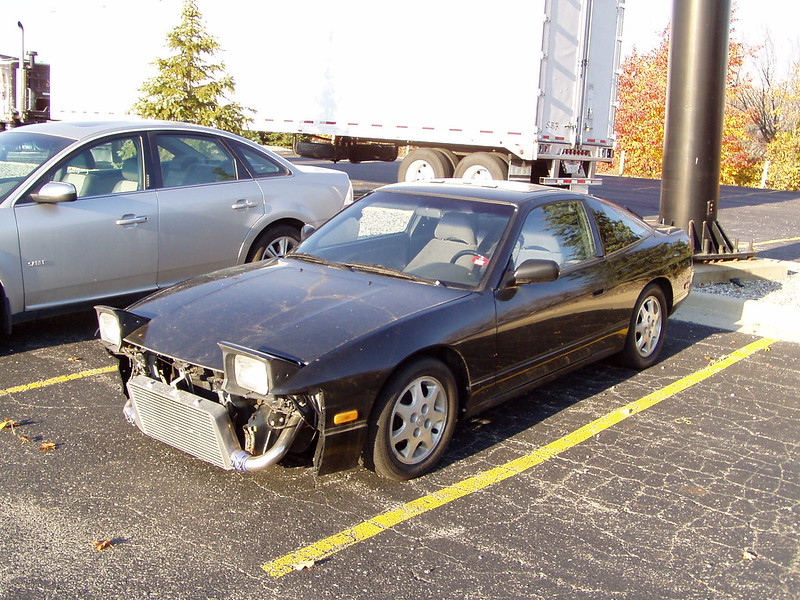 I don’t remember for sure, but I think I went back a second time to test drive the car myself, and a third time to actually buy it. I showed Olay photos of my previous build and he was glad that the car would be going to someone mature that wanted to take care of it and build it right. I talked him down to $5k for the car with the stock wheels instead of the gold 17×7 Racing Hart wheels he had on it. I remember getting teased for paying way too much for an S13 at the time, but looking back now I am still glad I bout it. 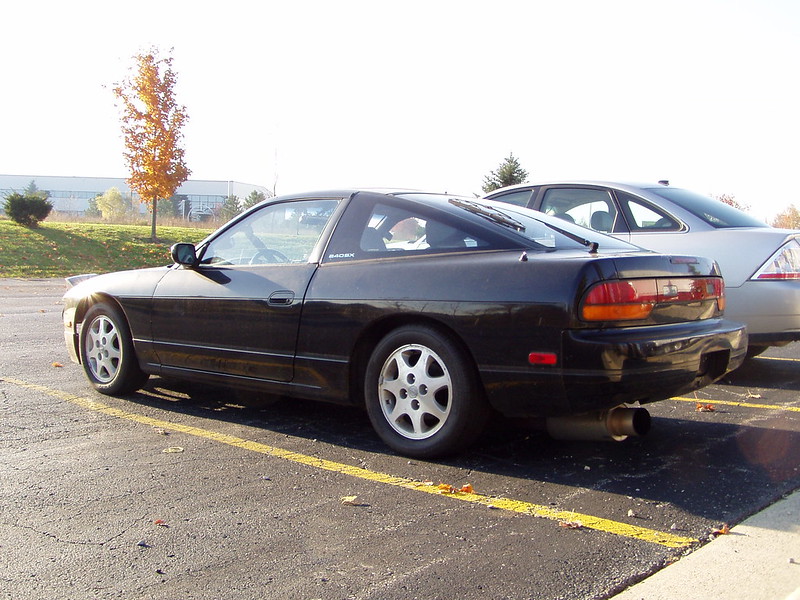 I got my brother to front me some of the cash to pay for it as my insurance check wasn’t due to arrive until the following week. My friend Ryan drove me to pick up the car on election day- I believe it was November 4th, 2008. We stopped at Burger King after picking up the car. I was constantly staring out the window with a stupid grin on my face as we ate. I remember awkwardly down shifting on the way home and thinking the clutch slipped when I got on the throttle a bit. My stomach dropped- and thus began years of being nervous about my Nissan’s reliability. 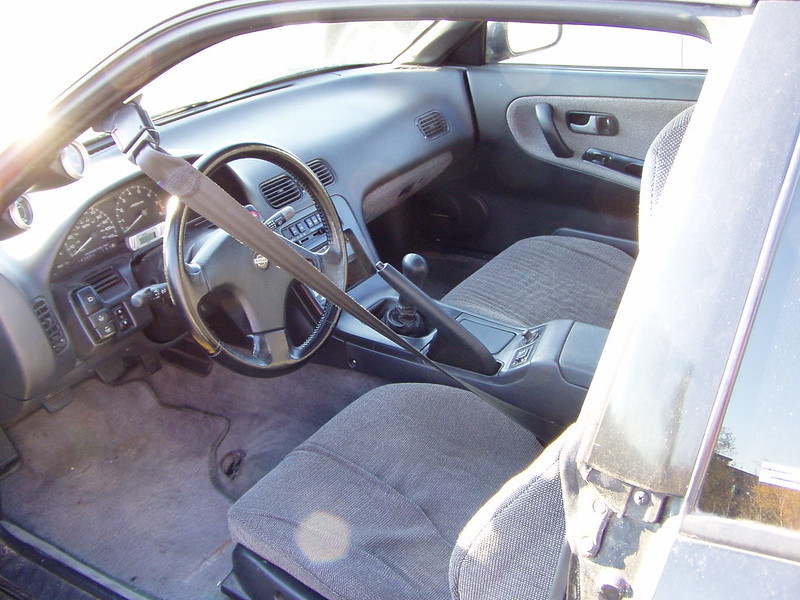 Fortunately I did some research the next day and found that the clutch pedal was simply out of adjustment. I used some tools in the parking lot of where I was staying at the time to adjust it and things seemed to be holding well. I drove the car to work and class for a few days and always had a smile on my face when I walked out to the parking lot on campus and saw the huge intercooler out there waiting for me. At this point the car was largely stock aside from the SR swap, a cheap intercooler, Apexi exhaust, Blitz boost controller and turbo timer, and a set of Tein coilovers. I picked up Mike’s spare Chuki bumper from his old USDM front end and had the shop spray it black for me so that the car would look a bit more presentable before Alicia saw it for the first time.

I also had no idea how to set sleepy eye headlights, lol: 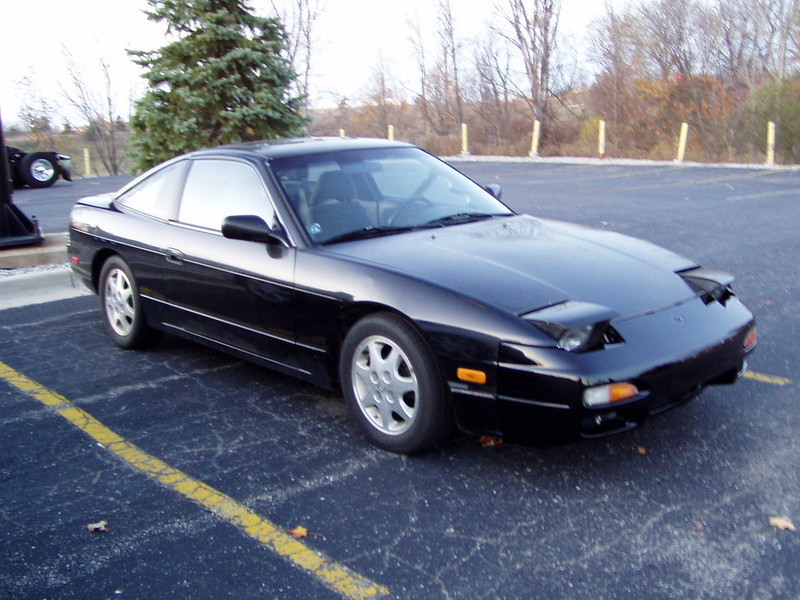 One day I was driving home from class and got stuck behind a slow car on the highway. I flipped my lights on when I finally got the chance to go around them and blasted down the highway towards my exit. Upon parking the car at my place I must have left the lights on and eventually killed the car’s battery. I called a tow truck the next day to give me a jump, but all they brought was a battery pack style jump system that couldn’t get the car to crank. I later had a friend come over and try jumping the car, but we couldn’t get it to crank either. 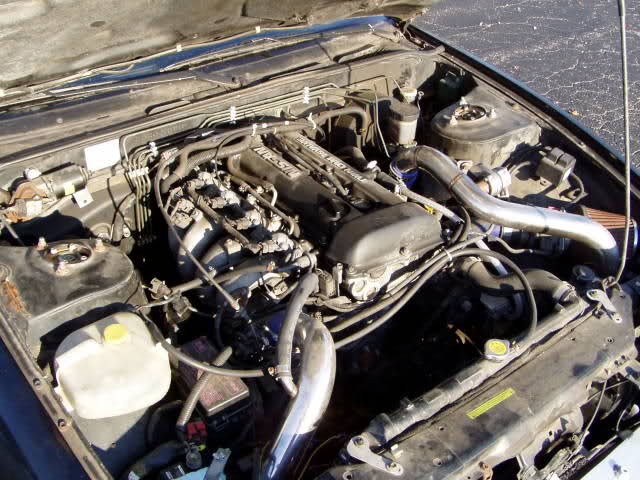 At about two weeks into owning the car I was feeling pretty helpless. I scoured the internet and talked to some other S chassis owners I met on the local forums, but every item I tried replacing yielded the same result. By now it was mid November and I was getting nervous about winter approaching. My cousins came out with their big Dodge Ram and we planned to push the car across the lot to bump start it so that I could drive it two hours home to my grandpa’s house for winter storage. After a couple failed attempts we ended up renting a U-Haul tow dolly and towed the broken S13 home to my grandpa’s garage. 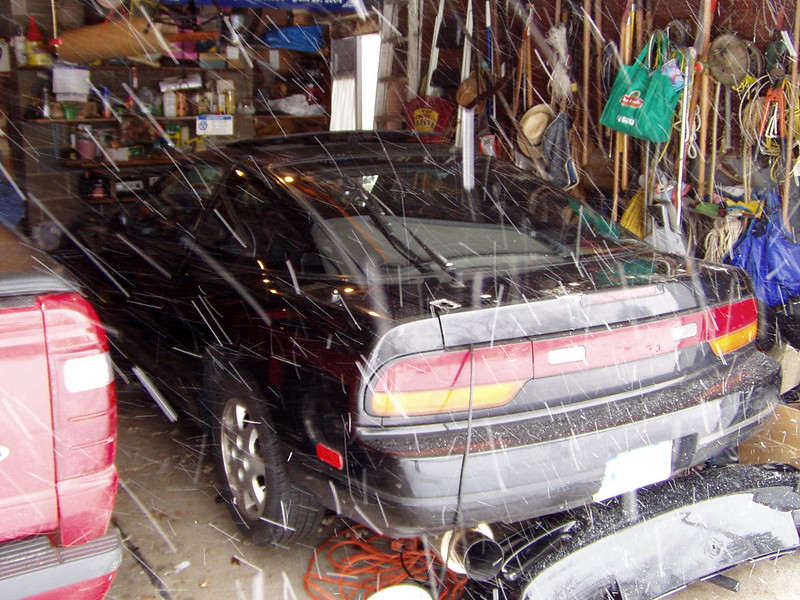 It was in this garage that the car earned it’s official nickname. My family was checking out what I had gotten myself into and found the car pretty comical. With no front bumper, an odd odor of aging 90s interior and gasoline, and holes in the carpeting, my brother and cousin commented that the car appeared to be very “ratty.” It was at this moment that we christened my new project “The Rat Ride.” 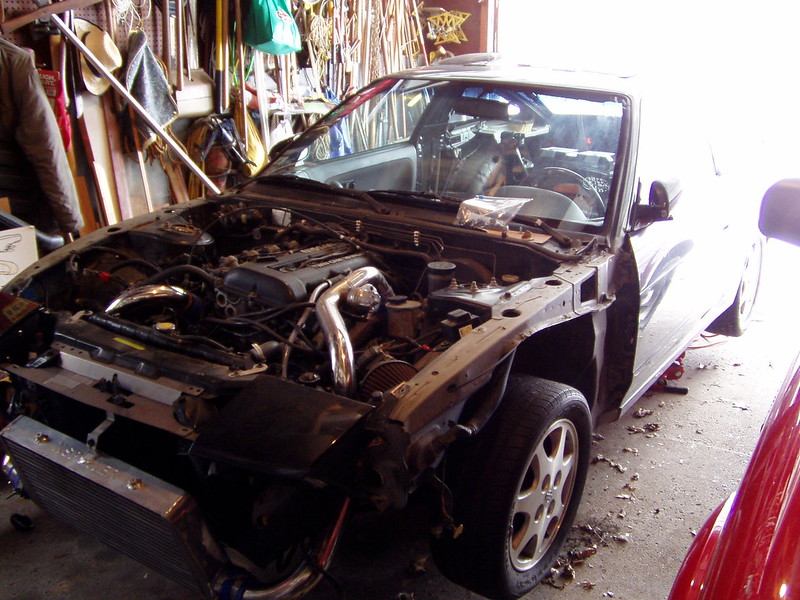 So there I was, left with a banged up stinky old Nissan that wouldn’t start and no idea how to fix it. It was just after Thanksgiving and I only had a couple weeks left before I would graduate college and start my full time career. I had just spent several weeks convincing Alicia to let me buy it, assuring her that everything would be fine. Two weeks later the car was dead in the water. Despite the rocky start, I was determined to learn all I could and turn the car into something respectable by Spring of 2009. This is when the journey of my S13 officially began.