I ended up working on the SR20DET swap for my coupe a bit this week for the first time in over a month. For whatever reason I just haven’t felt like tinkering with it too much. Sometimes I get overwhelmed with all of the goals I want to accomplish and end up not doing anything at all, thinking there is nothing I can really get done without throwing more money that I don’t have at the car. However, there’s always something to be done in the garage if I can get my motivation flowing and drag myself out there. 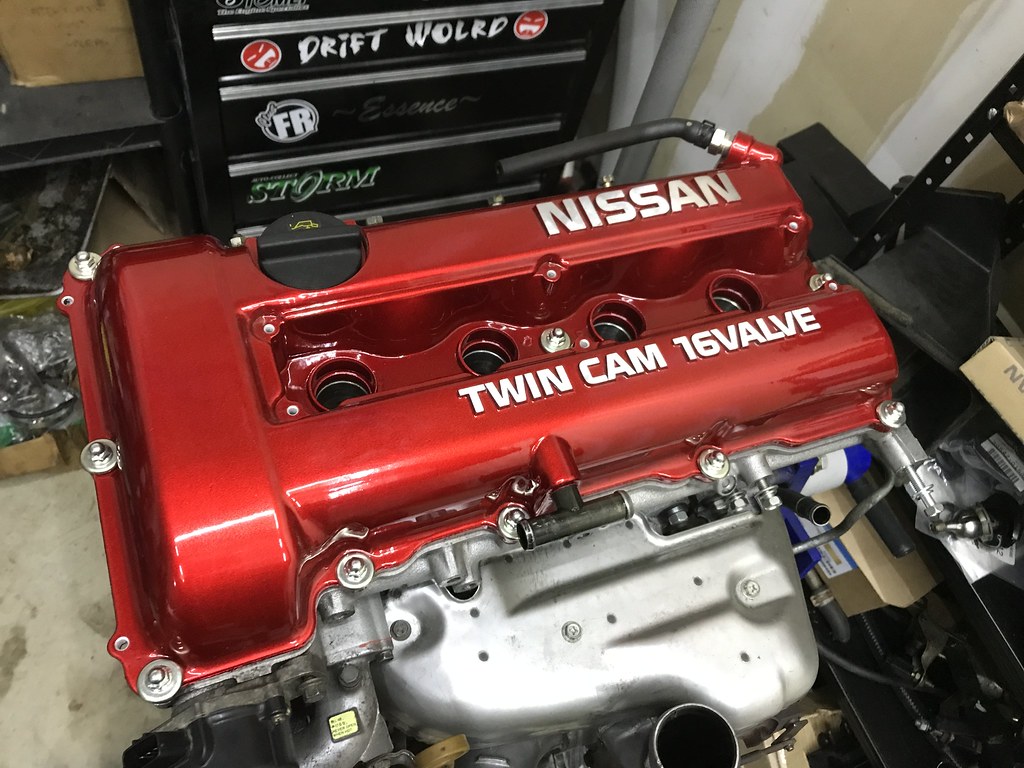 I began by installing the powder coated valve cover with all new hardware that I sourced from NissanParts.cc in addition to fresh gaskets. It’s crazy how nice the cover looks with fresh nuts and washers in place. I was actually tempted to install this setup on my hatch, but maybe I’ll do that at another time when I have the funds. 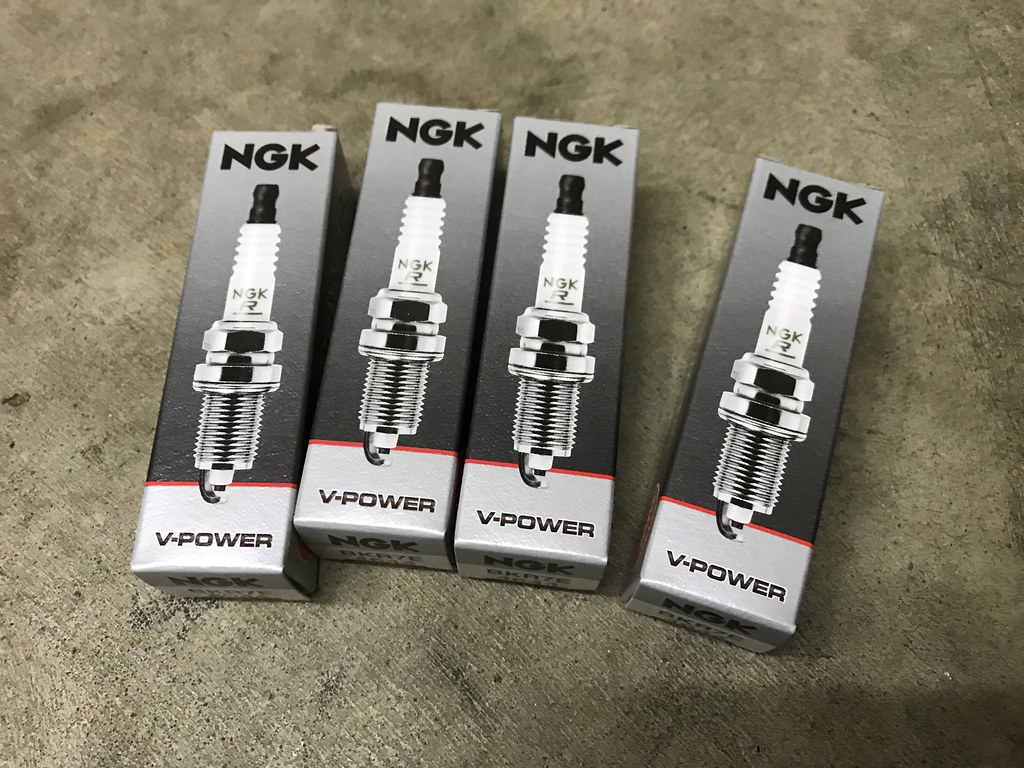 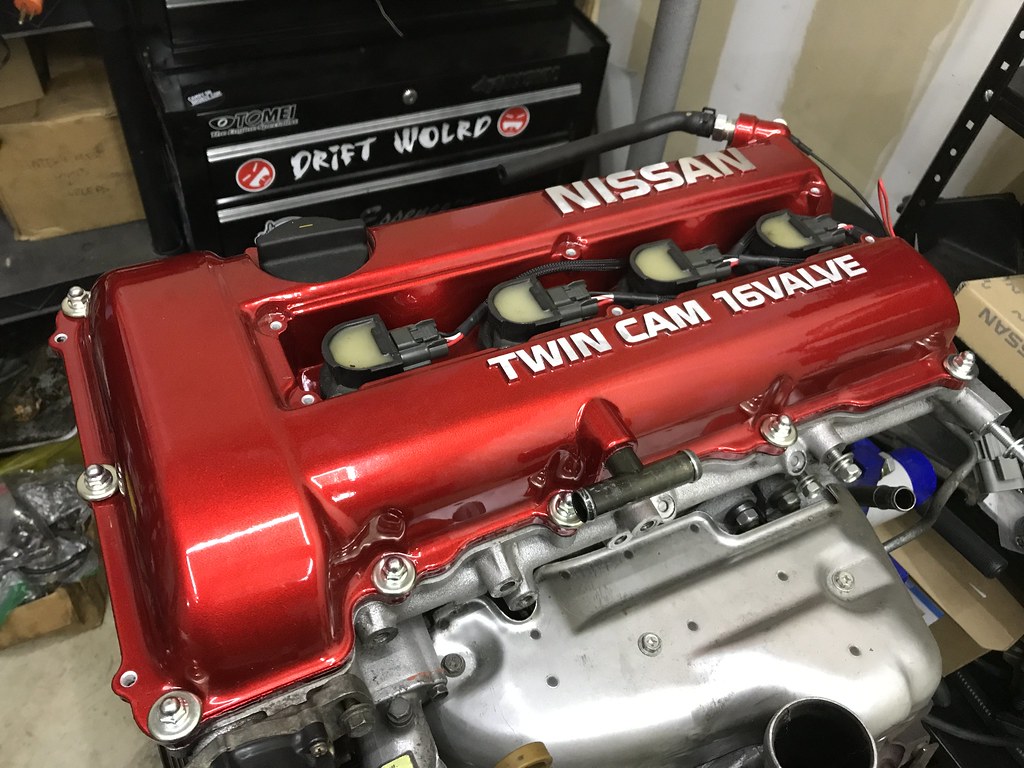 Next on the list was a fresh set of spark plugs, along with the coil packs and my Wiring Specialties Pro Series coil pack harness. Everything is covered up nicely with a new OEM coil pack cover and hardware. Not too shabby! 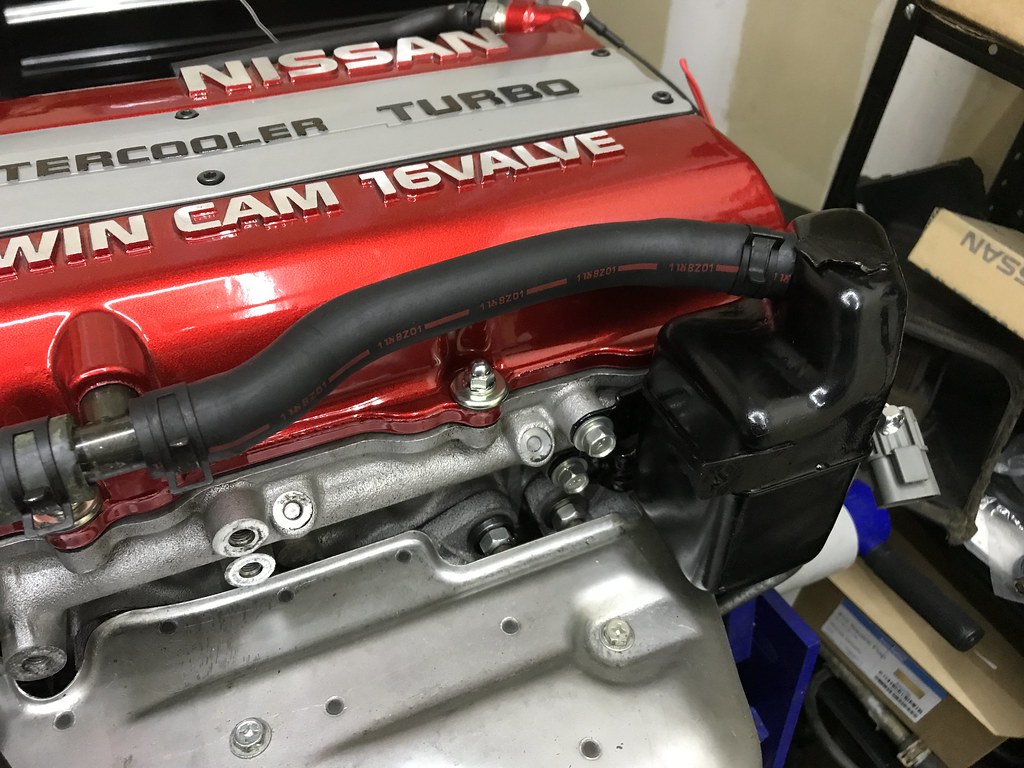 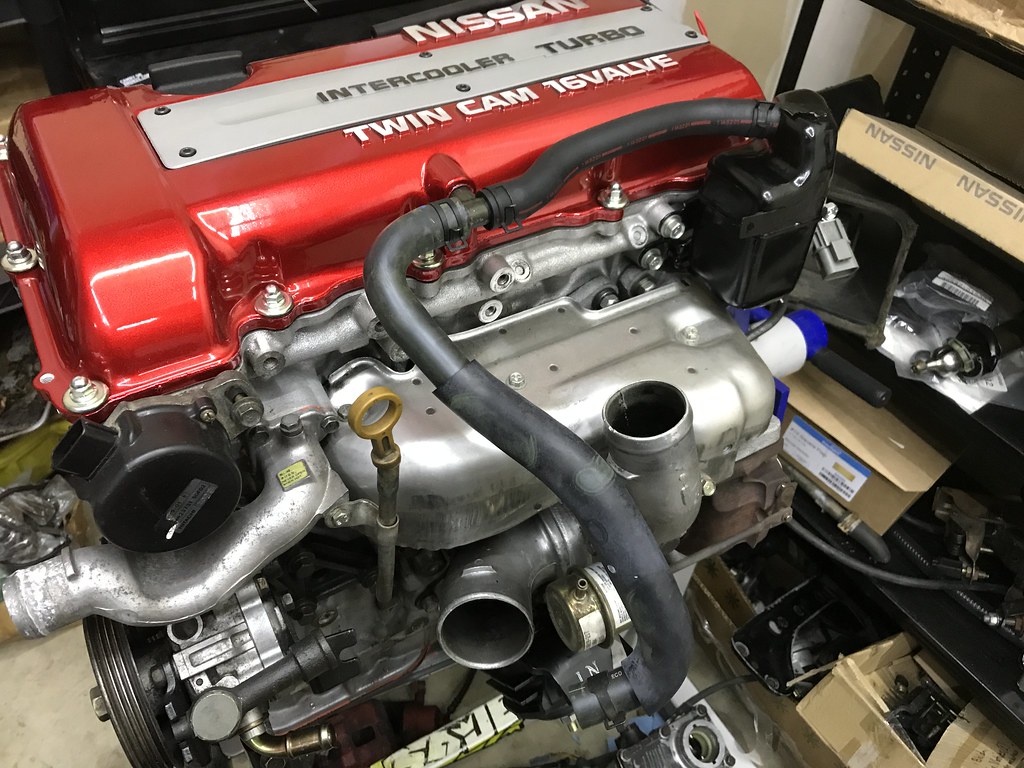 I then moved on to painting the factory catch can setup and installing it with new hardware and the proper hoses I sourced from Nissan in Japan. I’ve actually never run a catch can before on any of my SR20 engine and never had any major issues, but in the spirit of keeping things relatively factory this time around I thought it probably wouldn’t hurt to install it. A quick coat of high-temp paint and everything was in place. 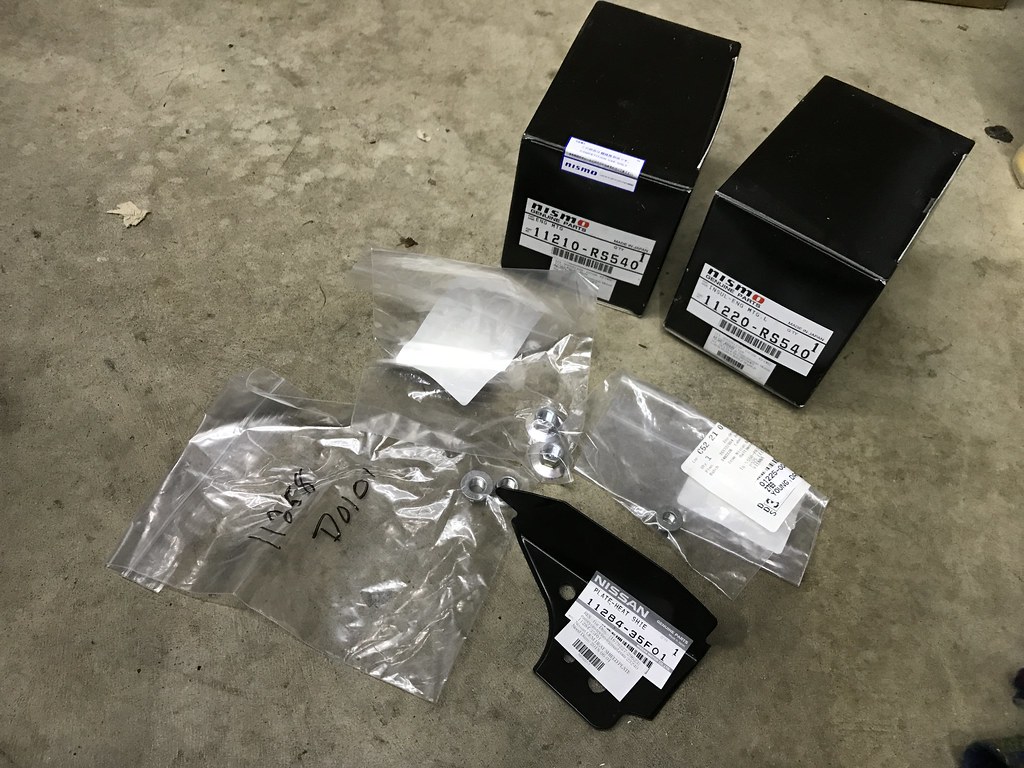 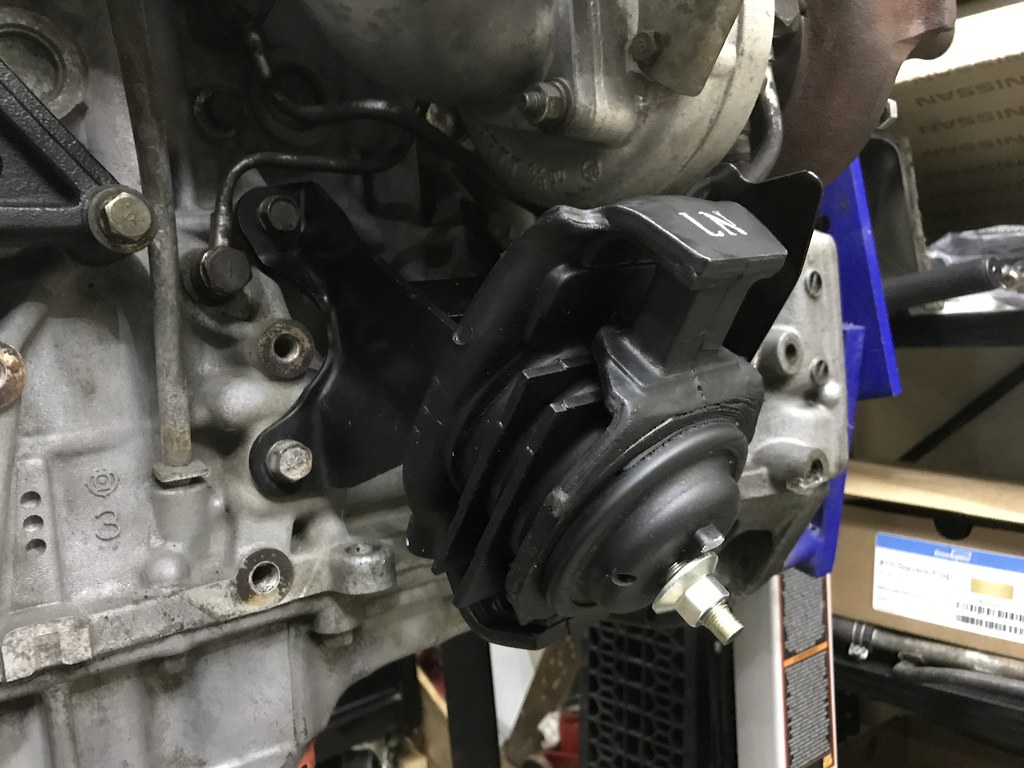 I had purchased a set of NISMO engine and transmission mounts to install on my hatch along with fresh hardware but decided I would use it on the coupe. I’m sure I will end up doing the same for the hatch eventually. I also sourced the small metal heat shield that goes on the left side engine mount to protect it from the heat coming off of the exhaust assembly. Kind of cool. 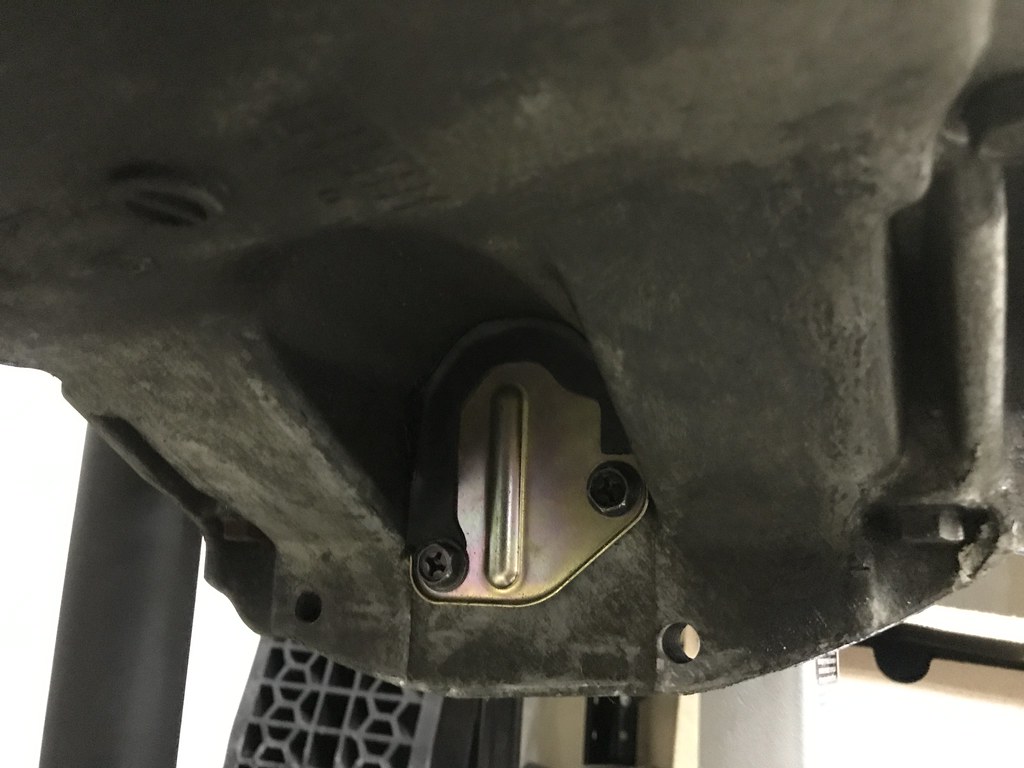 I haven’t had a chance to clean the bottom side of the engine just yet. You know, because that is very important and everyone will see it.

Finally, I installed the small metal plate that blocks off the flywheel observation window on the back side of the engine. I noticed this was missing from the engine when I removed it from the donor car. 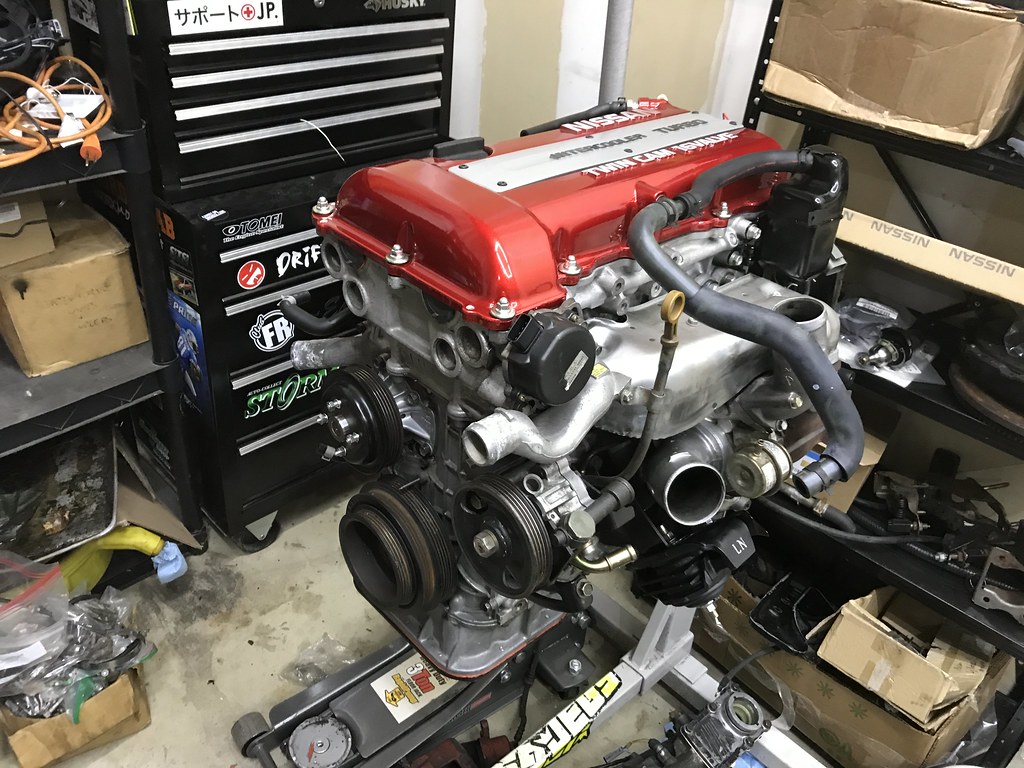 So that’s about it for now! Next I hope to move on to refreshing the intake manifold with new gaskets and get that reinstalled, along with the alternator and new belts. Then it will just be a matter of cleaning the transmission, replacing the rear main seal, and slapping it all back together.

As for the chassis itself, my hope is to bring it home to my garage sometime in the next couple of weeks. This will mean a garage full of S13s for the summer- which I need to ensure is OK with my wife before going that direction. I was hoping to have the engine bay sprayed before bringing the car home, but I think I want to take care of some of the rust repair that is needed myself prior to doing that. It will probably be best for me to just bring the car home as-is and tinker with it as I have the time. Plus, this will allow me to mock up the Silvia front end and aero setup- something I have really been looking forward to.

That’s about all I have to report for this week. I need to shift my focus slightly to the hatch for the next week or two to ensure that it is ready for the trip to WekFest and Final Bout Gallery in just a couple short weeks. I’m planning to knock out some of the needed maintenance this weekend if I can.

Thank you as always for stopping by. Have a great weekend!