Posted on October 4, 2019 by camryonbronze

It certainly feels like fall is upon is here in Michigan. With a high of 55º today and an abundance of clouds, we finally had to give in and turn on the heat in our house for the first time in months. It probably won’t be long before the leaves fall and are swiftly replaced by snow. Needless to say, I need to get the car situation sorted out and everything tucked away before the weather really goes South.

Knowing this, it totally makes sense that I purchased another S13 earlier this week, right? Probably not at all, but this one seemed like a good buy to finish out the season. The car was advertised as a stock ’92 hatch that needed to have the rear hatch and rocker panel replaced and then it would be ready to rock. The engine was removed due to knock, but a replacement KA24DE was included with the sale as well as the bad engine. The car is an SE with sunroof and power options as well as AC. 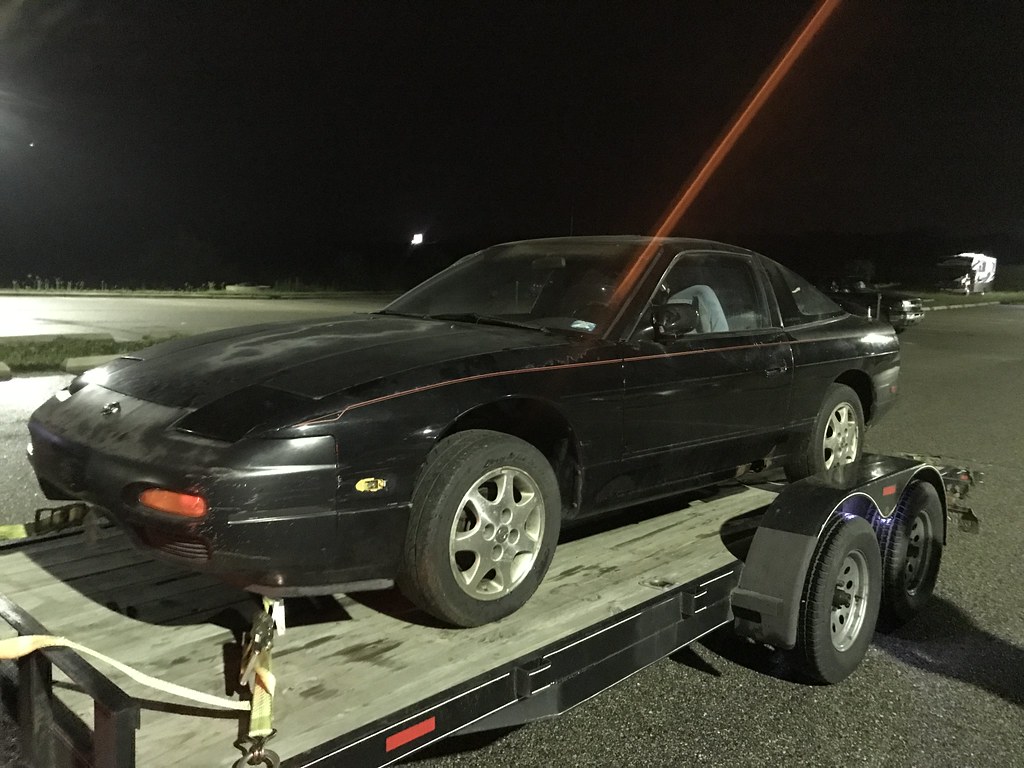 I talked with the seller a bit last weekend and things seemed to fall into place. He had actually moved out of state and left the car here on the West side of the state with a friend to have him replace the engine, but he ended up not having time and just wanted to sell it all instead. Negotiations were a bit touch and go, so I didn’t get my hopes up- but things seemed to sort of fall into place. The car was located about two hours away from me, but I actually had to go to a meeting for work about a mile from where the car was. Things couldn’t have really worked out better.

After my meeting ended, I met up with my good friend Tim once again to retrieve a trailer and go get the car. We arrived about thirty minutes earlier than we were supposed to meet the guy selling the car, but fortunately he was home. The car wasn’t located in the best part of town and the street the house was on was very narrow with cars lining both sides- not the ideal situation. The driveway was very skinny and steep with the car sitting behind the house hanging out of a garage and surrounded by a couple of Subarus and a pickup truck, none of which seemed to run.

Tim and I were surprised to find that we actually knew the gentleman selling the car from previous transactions in the Michigan S Chassis scene. Remember the white hatch rolling chassis that I took from Tim as payment for my Work CR Kais back in 2011? I ended up selling that car to Darren, the guy that was storing this S13 for the seller. Small world. 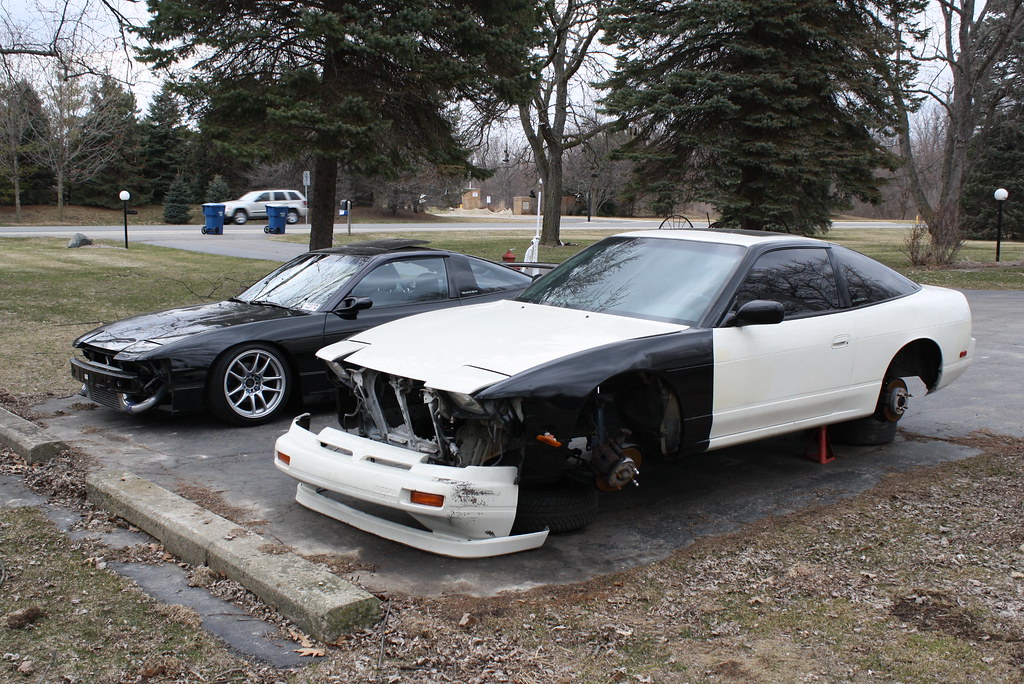 The white hatch chassis that was to be my drift car that I ended up selling back in 2011 to Darren. He ended up SR swapping it and selling it a few years later.

The load up process was far from smooth. Darren’s yard was sort of a mess with cars, tools, and parts scattered everywhere. The truck parked in front of the S13 had a dead battery, so we waited while the batter was swapped from another truck to move it out of the way. Tim unhitched the trailer in the street and backed his truck up the driveway to load the KAs. When loading the second engine, the pins fell out of one of the legs on the cherry picker and it collapsed, dropping the engine and nearly taking Tim’s foot off in the process. Luckily he escaped any major injury and it was the knocking engine that fell, so we managed to put things back together and get the second engine into the truck. 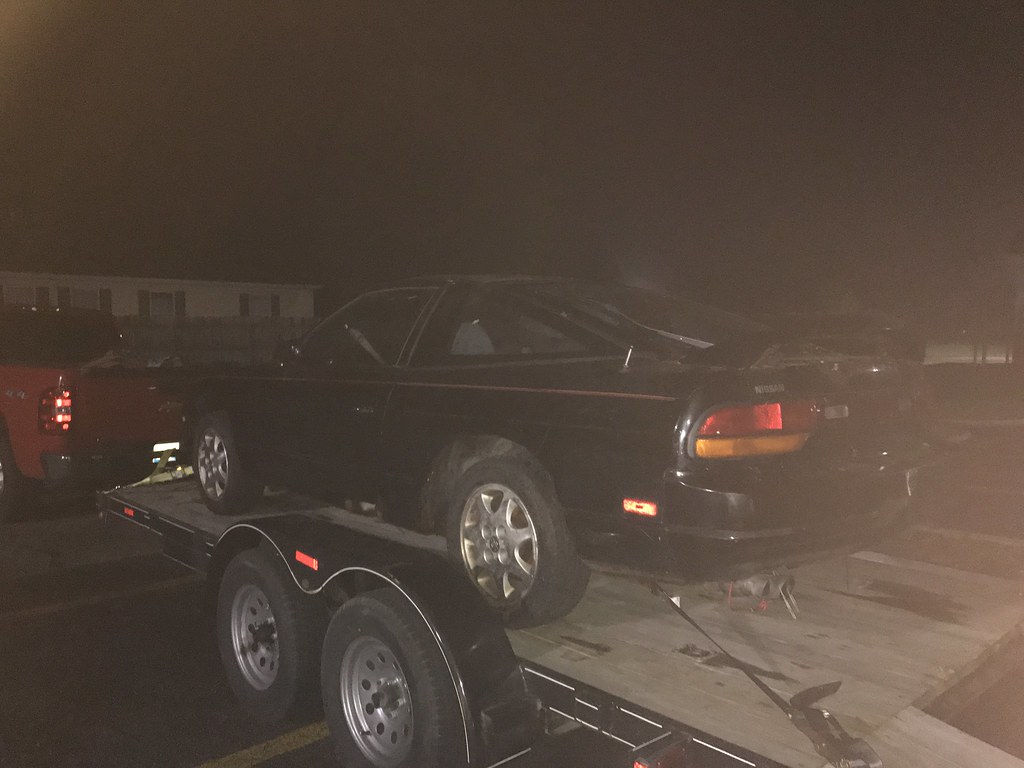 When the time came to move the car itself, we found the brakes were seized from sitting outside for a few months. After removing one of the rear calipers, we were able to get it loaded up onto the trailer relatively easily. Things were just generally in a state of disarray at the house and it was difficult to see at night, but we managed to load up and get out of there in just under two hours- not bad considering all of the setbacks we faced. 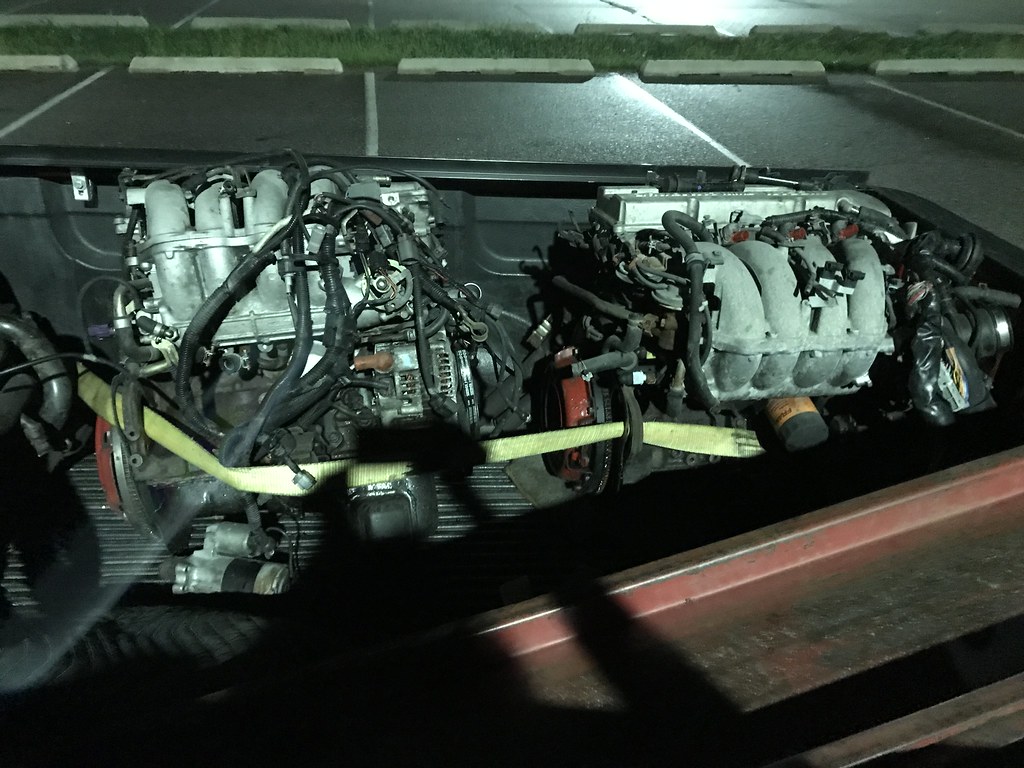 The two KA24DE engines that were included with the black hatch.

I ended up leaving the car and engines with Tim since he is going out of town this weekend and won’t have time to bring everything to me until this time next week. This works out pretty well since it will allow me to finish stripping the white coupe I have been parting out and have the shell out of my garage before this car arrives. All in all, I think this car should have a lot of useful parts on it that I can both keep and sell. It has a fair share of rust on the rocker panels and rear quarters as usual, but the frame rails and the remainder of the chassis actually seem pretty solid. We’ll see how it shakes out once I manage to tear into it. 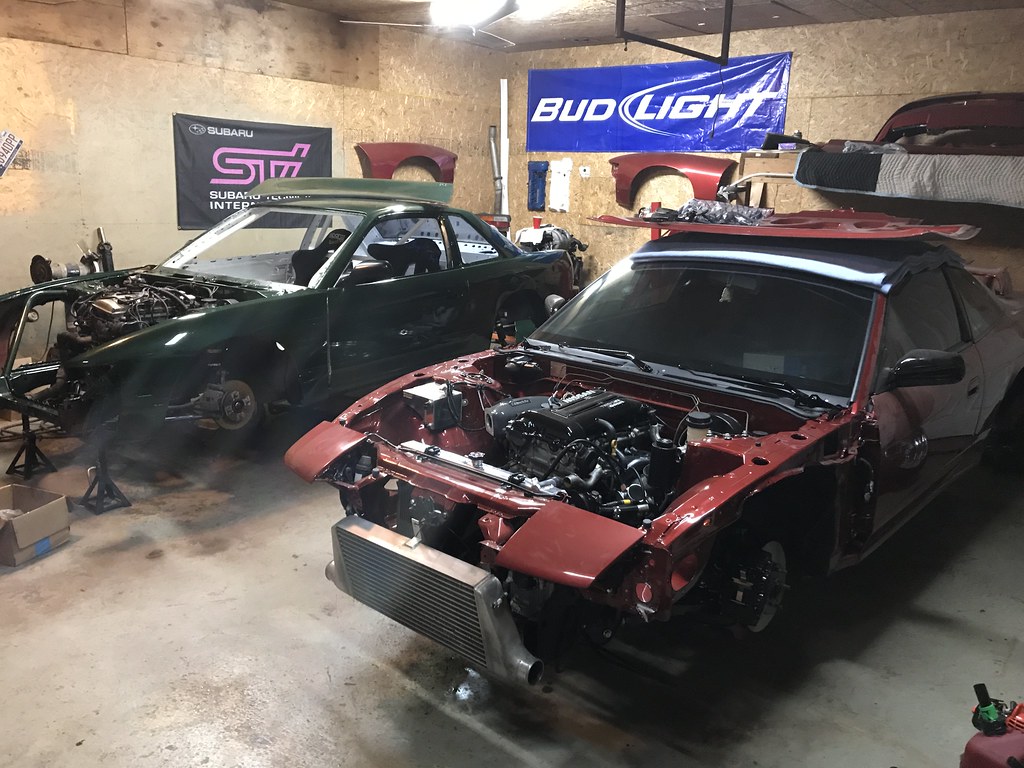 A shot of Tim’s current projects. The hatch is a fully restored street car, and the coupe will be his beginner drift car. Sense a theme between both of our cars? None of them are currently being driven…

All that remains to remove on the white coupe is the front subframe, suspension, and engine. I think Saturday night will likely be spent trying to finish that and get the garage organized. Space is going to start becoming an issue in the near future with all of our patio furniture and outside items needing to come inside for winter, so organization is going to be key. Looking forward to getting everything tidied up and organized to try to make life as easy as possible while I finish parting out these last two cars.

As for my personal coupe, I have not touched it since the last update. It’s sort of on hold until I finish selling all of these items and take care of some home related needs. It kills me to let it sit and not make any progress, but I have to remain patient while I take care of some other things first. I hope to be focused on getting that car running again by the beginning of December. With some time off for the holidays, I should be able to make decent progress if things go my way.

As for my personal hatch, I went inside of the car today to retrieve something and was met by that all too familiar musty, damp smell inside. The windows were fogged on the inside due to moisture getting into the car due to all of the rain we have had recently. I was bummed to see that my Canadian headliner had gotten really wet, so I ended up removing it on my lunch break today to try to get it to dry. This is a result of the rust along the windshield, window weather stripping, and the sunroof seal. Needless to say I am really discouraged at the moment, but I don’t really have a lot I can do right now to fix these issues. I guess we’ll see what happens, but the hatch is definitely the least of my concerns at the moment- which feels odd to say.

I’m beginning to wonder if I bit off more than I can chew at this point! Maybe this is where it all ends, hahaha. I don’t think so though! I am doing my best to stay organized and split things up into manageable tasks. As I go through everything one item at a time, I should be able to make some good progress and take care of all of these issues. I definitely understand at this point why people don’t really succeed too often at owning two project cars- and why they don’t bother trying to part cars out either. In the end I am still enjoying the process though, so I’ll come out on the other side soon.

Sorry for the lack of photos this week! I didn’t manage to take many over the last few days. I hope to be much more organized and have my thoughts a bit more clear by this time next week.

I wish you luck with whatever project you choose to tackle this weekend. Thank you as always for taking the time to check in here!